This blog post is written by Bob Zawalich, creator of hundreds of useful plug-ins for Sibelius. Read on to learn how to improve your workflow by quickly and easily accessing your favorite plug-ins.

I tend to run a lot of plugins, but I often run one a lot and then not again for a while. So at any given time I might have a set of plugins that I would like quick access to without having to reset shortcuts for each of them.

I find two plugins to be very useful for setting up a reasonably-sized working set of plugins: Run Plugins By Name (in plugin category Other), and Hans-Christoph Wirth’s Fixed Plug-in Shortcuts (in plugin category Menus and Shortcuts). Though the latter says it is for Windows only, I have used it successfully on Macs in recent versions of Sibelius.

In both cases, you can assign a shortcut key to the single plugin, and it will give you a list of other plugins to run.

I will describe Run Plugins By Name first, because I think it is simpler, but you may well prefer to use Fixed Plug-In Shortcuts, depending on your workflow.

Run Plugins By Name gives you an alphabetically sorted list of all your installed plug-ins. You can type the first few letters of a plugin name, and the list will select the desired plugin (this works especially well in Sibelius 7). Then click OK or type Enter (or Return) to run the plugin. (Note that you can’t double-click the list to run the plugin. That would be nice, but it can’t be done in a plugin.)

The next time you run Run Plugins By Name the last plugin you invoked from the plugin will be at the top of the list, and you can just click OK to run it.

Up to 12 (by default, though you can change this) recently run plugins will be at the top of the list, in the order run, followed by the remaining plugins in name order. So if your working set of plugins is around 12, they will show up at the top of the list when you run Run Plugins By Name, and so should be very easy to find.

This plugin is useful if you change the plugins you are using often, or if you have only a few you ever run. There is very little setup required, so it’s trivial to find and run a plugin if you know its name.

Here is the plugin’s dialog: 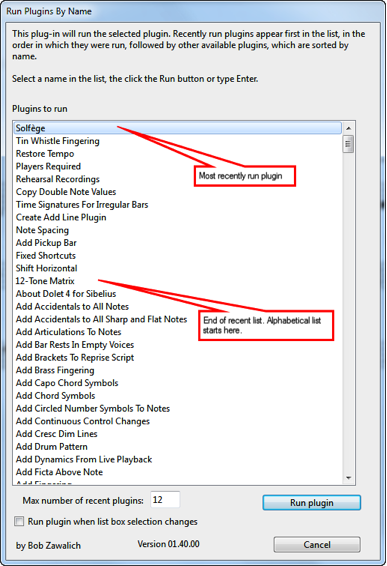 Fixed Plug-in Shortcuts has been around for a long time. It works really well for giving you sets of plugins that you will always have access to.

It lets you assign meaningful “sub-shortcut” names to various plugins. The one disadvantage of this plugin is that it takes some initial setup.

Fixed Plug-in Shortcuts has lots of options, but I will describe only the basic usage. When you first run the plugin, you see a dialog like this: 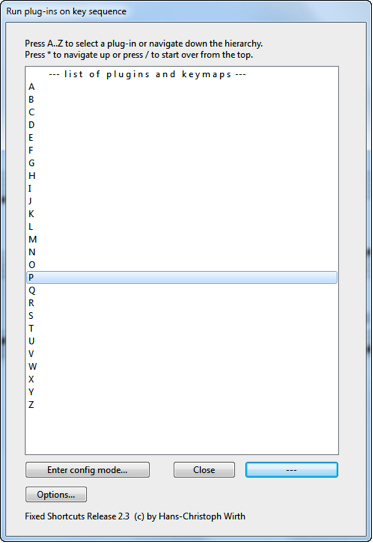 You will need to use Enter config mode… to assign shortcut slots to plugins. It is helpful to know the plugins you want to use so you can choose meaningful letter names for their shortcuts. So let’s say we want to use:

Choose the empty “S” slot and click Enter Config Mode… You will see another dialog. Click on Edit/Up/Down, and you will see a sorted list of plugins. Click on the Run plugin radio button, and choose the plugins you want (Split Bar, in this case) from the list. 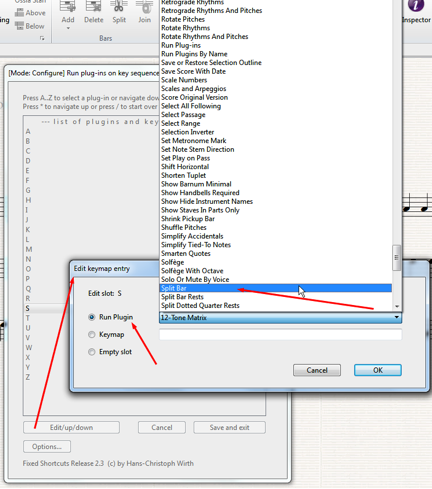 When you hit OK, Split Bar will be in the S slot. Choose Save and exit to return to the main menu.

From now on, if you run Fixed Plug-in Shortcuts and type S, you will run the Split Bar plugin.

Choose appropriate slots for the other plugins you want. (Note that, in my example, Edit Instrument Name and Exchange Staff Contents both start with E, so you need to decide the most useful shortcut).

You have an easily accessible set of 26 (A – Z) plugins, plus the plugin has a mechanism for creating multiple keymaps, which are named sets of 26 plugins, so you can set up multiple sets of plugins for different contexts.

Finally, when you run a plugin via Fixed Plug-in Shortcuts, it will appear in the list of Recently Used plugins at the top of the dialog and automatically given a numeric shortcut: 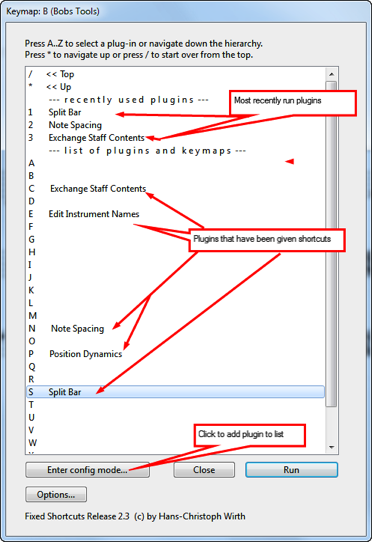 So this really works well once you get past the initial setup, and if you use the same plugins all the time, it’s a convenient way to make them accessible without have to set up shortcuts for each of them.

Here are a couple of things to look out for with either plugin:

I find either of these plugins easier to use than assigning separate keyboard shortcuts for each plugin, plus having a alphabetic list makes finding plugins easier. You can assign a single shortcut to one of these “master plugins”, and have easy access to a number of plugins.

Post updated on December 4, 2012 to more clearly explain that these plugins maintain their own lists of recently run plugins.

You've downloaded dozens or hundreds of Sibelius plug-ins — now how do you squeeze even more speed out of them...

To make it easier to work with a large selection of many items scattered throughout a score, Bob Zawalich has...

Bob Zawalich, the plug-in developer's developer, explains how to use Sibelius's dialog editor to change plug-in dialog default values, should...