This tutorial was contributed by composer and Sibelius user Fritz Feger. If you would like to contribute a tutorial for the benefit of Sibelius users around the world, please get in touch.

Apple’s Logic Pro contains a number of high-quality virtual instruments and effects that can be instantiated only from directly within Logic itself, so you cannot add them directly to your playback configuration in Sibelius. Using Mac OS X’s built-in IAC buses, though, you can route MIDI from staves in Sibelius through to tracks in Logic that can host these instruments. In this tutorial, I’m going to show you how.

Run Audio MIDI Setup from the Utilities folder inside Applications, then choose Window > Show MIDI Window if the MIDI window is not already visible. 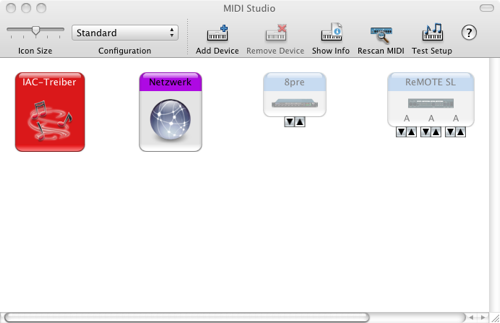 Double-click the IAC Driver device and switch on the Device is online checkbox in the dialog that appears, then click the + button to create a new IAC bus. Call it e.g. IAC Church Organ. (You can create as many buses as you like; each one has 16 MIDI Channels). 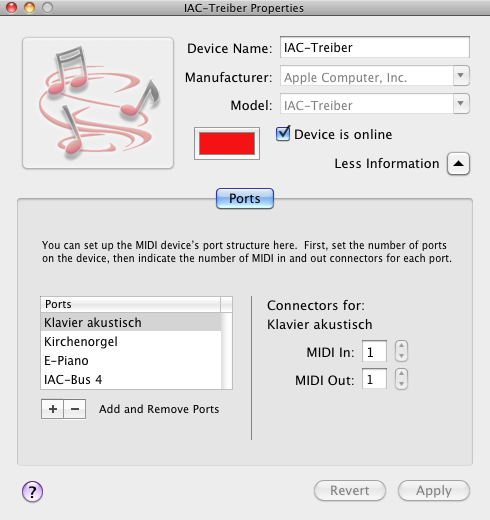 Next you should restart Sibelius, if it is already running: Sibelius can only recognise a new bus when it scans the available playback devices at start-up. Then go to Play > Playback Devices and choose a custom playback configuration, if one is not already selected (you cannot change the devices used in the built-in playback configurations, so if you haven’t yet created a playback configuration of your own, click New to create one). Now activate IAC Church Organ; it should show up in the right-hand Active devices list. Be sure that the Sound set is set to General MIDI. 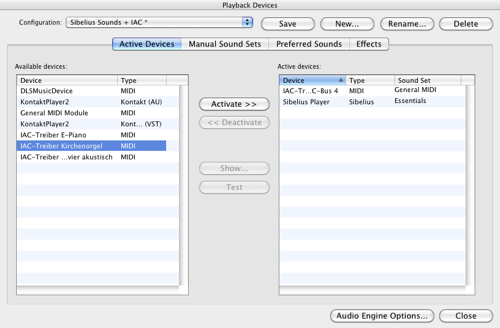 Now go to the Manual Sound Sets page of the dialog, select IAC Church Organ from the Device list, switch on Use manual sound set, and set Number of channels to 16. 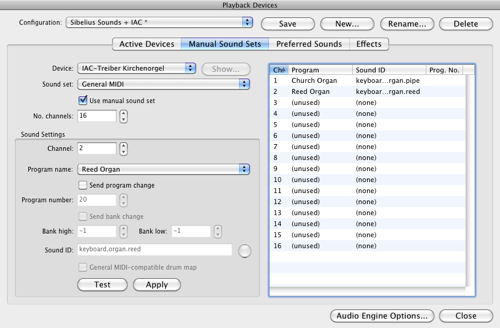 When the setup in Logic is completed, we will return here to select program names that come closest to the sound you want to play back from Logic – you can also do this now, but then you won’t yet be able to test the sound. Don’t forget to press the Apply button after each selection! Then click Save, and you’re done in Sibelius for now.

Now open Logic (although Logic updates the IAC buses on the fly, so no problem if it is running already). In the Arrangement view (or wherever you want) of a blank project create (Opt–Command–N) 16 tracks with Software Instruments. 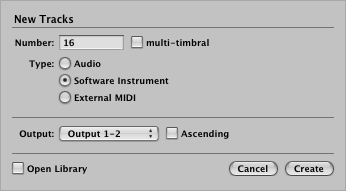 In the I/O section of each channel strip (for fastest input use the Mixer window), provide each channel with a software instrument of your choice, add effects, sends, whatever. 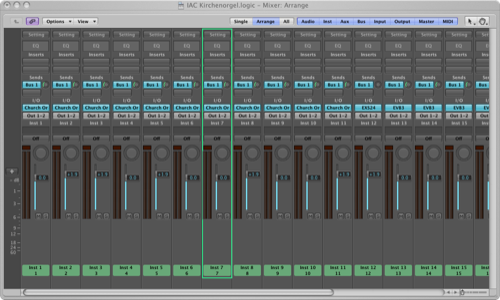 For my example maybe select for track 1 Garage Band > Church Organ, and in the Church Organ window which pops up select the first registration, namely Bass 1. For track 2, do the same but with Bass 2, then track 3 Flutes and so on. That’s easy. But now comes the tricky part.

Open the Environment window (I’ve been using Logic for years, and I have always avoided having to edit something there…). From the top left, choose All Objects from the dropdown list. 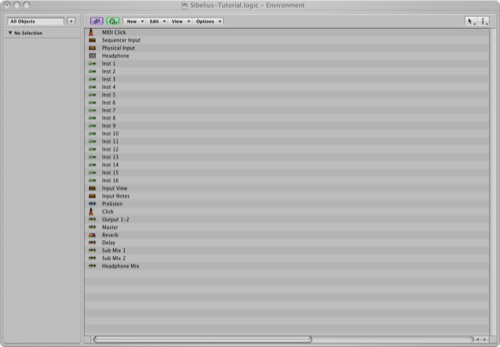 In the View menu, switch off Text so that you see the channel strips like in the Mixer window. 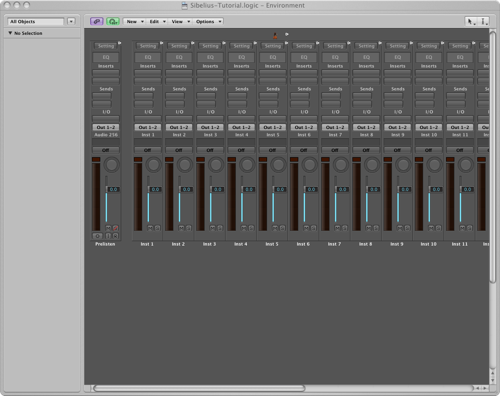 Drag the window big enough to have space for two new objects to create and to wire together. 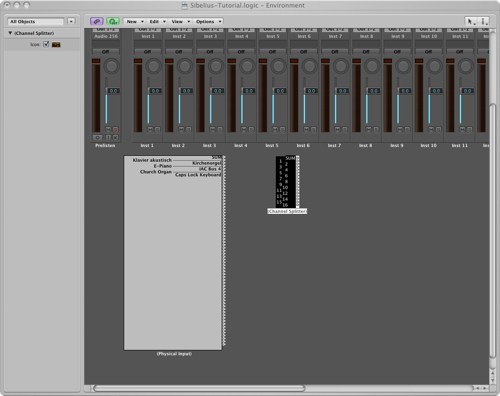 Figure out which one of the the tiny triangles belongs to IAC Church Organ – if you can’t see, just count. The top triangle is always Sum. Or drag Physical Input big enough to see the lines from the names to the triangles. Then left-click that triangle and draw the wire to your Channel Splitter to connect them. 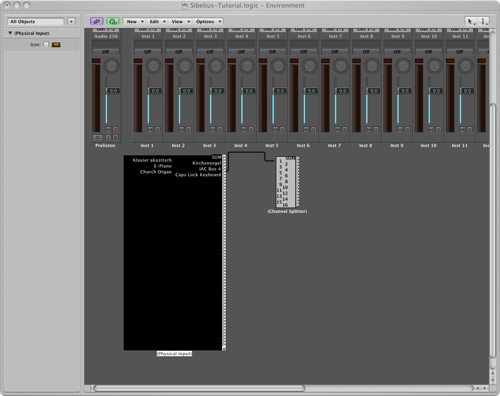 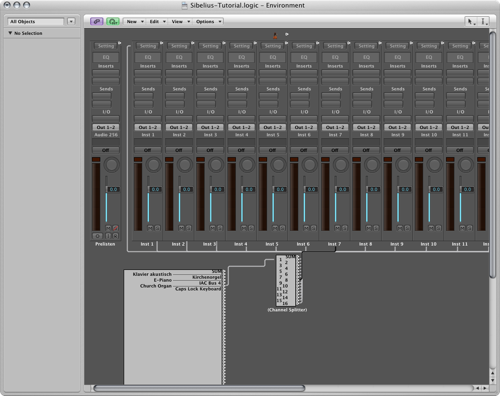 Now you can return to Sibelius. In the Mixer, you should now have the IAC Church Organ available in the Device drop-down list in addition to whichever other devices you have in your playback configuration; select it. Then, from the Sound ID dropdown list below, select something (which you have assigned on the Manual Sound Sets page of Play > Playback Devices). That’s it!

If you want to create more IAC buses, you don’t have to repeat all the Environment wiring stuff each time. Just save the file with a new name, go to the Environment window, select the cable which connects Physical Input and Channel Splitter, delete it, and plug in the new IAC bus that shows up in Physical Input. The wiring of the Channel Splitter to the 16 channel strips is universal. Then you can exchange the sound in each channel strip. I personally find it convenient to make a new Logic file for each IAC bus instead of making 32 or more sounds and multiple Channel Splitters in one file.

Did you know that, with just a little bit of effort, you can route your MIDI from Sibelius, Finale, or...

An extremely detailed and thorough checklist of steps, that, when followed correctly, can have you humming along with Vienna Ensemble...