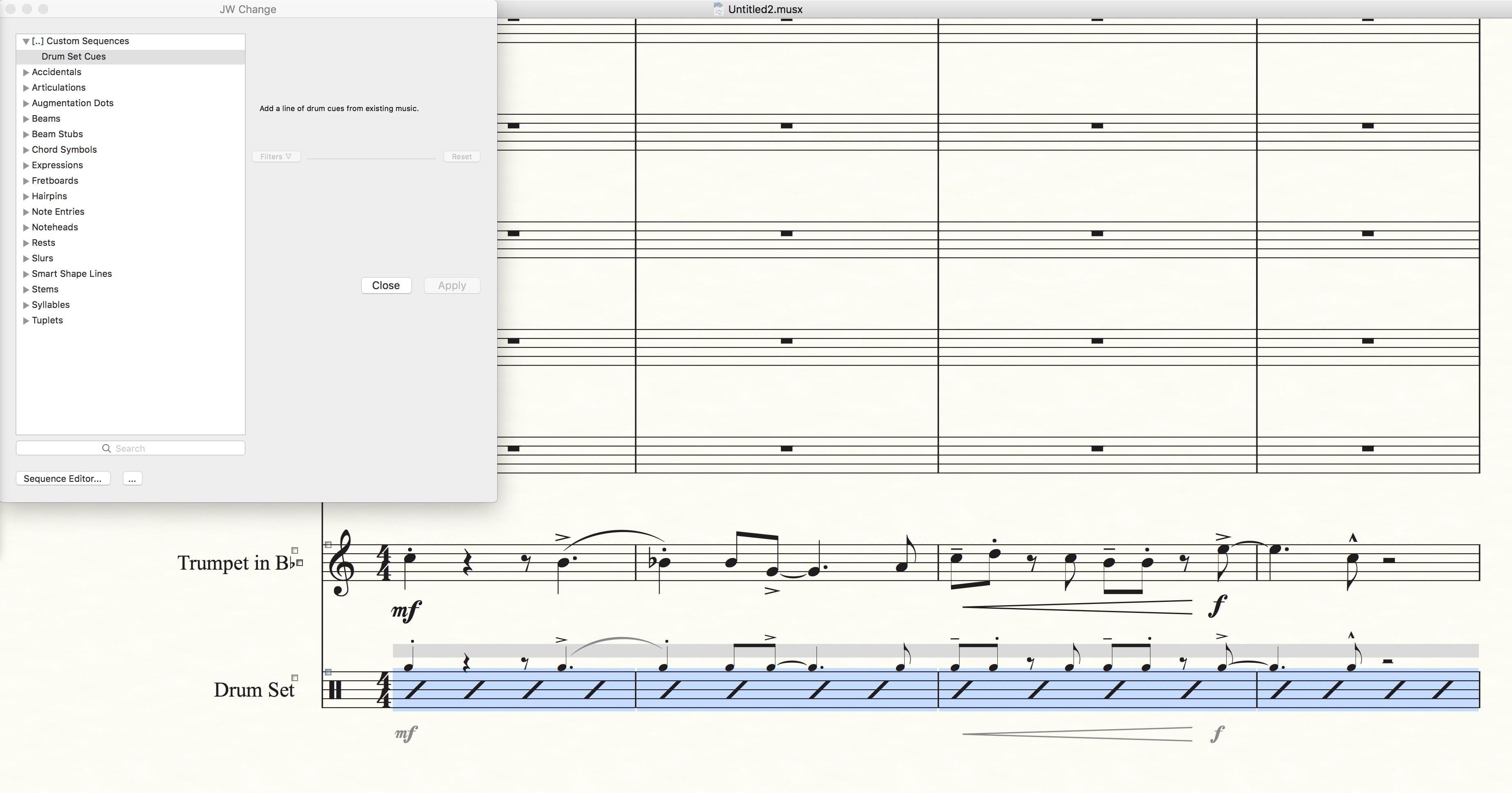 If you use Finale, you know how customizable it is. You also know that many of its powerful features are scattered across its tools, dialog, and sub-dialogs, making certain tasks a chore to execute.

Jari Williamsson has created a suite of Finale plug-ins for Windows and Mac to make those features more user-friendly. There are so many great plug-ins that each deserves its own blog post. For now, we’re going to drill down on one specific feature of one plug-in: the Sequence Editor of JW Change, in which you can build a custom sequence that changes existing elements in the Finale document through a general user interface.

Learn how to use this powerful tool in this video tutorial. A transcript follows, with links.

You’ll first want to download the plug-in and install it using the general directions for Windows and Mac. Once you’ve done that, you’re ready to go.

Even in JW Change, there’s so much to explore even without using the Sequence Editor. What I’ll first do is show you a series of individual tasks that I’ve accomplished with JW Change. As I do these tasks, behind the scenes JW Change is remembering what I’ve done — which will come in handy later, when I want to build a sequence from them.

Here, I have an example of some trumpet music for which I’d like to create drum cues. A series of tasks must be performed to get this to look right.

After I copy and paste the music into the drum set staff, I’ll open JW Change if it isn’t already open, and run each of these tasks individually.

This looks great! But I certainly don’t want to manually run this series of tasks every time.

Fortunately, this is where the Sequence Editor comes in.

I’ll open the Sequence Editor… The first thing I’ll do is click on Add Group… I’ll name this my Custom Sequences, but you can call it anything you like, and add a description.

Next, I’ll need to click on Add Sequence… and name the specific sequence — in this case, Drum set cues.

From here, I can select some or all of the tasks that I’ve previously run in the current session of Finale, and add them to the sequence. You can change their order, delete them, or even edit them within the Sequence Editor, if you so choose.

Once that’s done, I’ll click Save and my sequence is ready to go!

So, let’s see it in action.

So much easier! For this specific case, I’ll want to do two more things. First, I’ll add slash notation to the drum part. Because the notes are in Layer 1, I’ll modify my Slash Notation style to apply to Layer 2, by going to the Staff Tool > Define Staff Styles… > Alternate Notation Settings… and changing the style to apply to Layer 2. I’ll also want to show the elements of the other layers here. I’ll then apply the Staff Style.

Finally, I’ll go to Utilities > Change > Ties… and set the Tie Direction to Over.

If you have a macro editor like Keyboard Maestro, you can program these three elements — your JW Change sequence, Slash Notation Staff Style, and Change Ties into one macro.

I hope you enjoyed this video and that it opens up a world of possibilities for you when you use Finale.

Finale enters the world of 64-bit computing today with a new release focused on streamlining and modernizing the codebase. New...