In contemporary music arranging and production workflows, clients frequently expect high-quality audio from arrangers and composers. The traditional specialized roles of songwriter, composer, arranger, copyist, and engineer tend to blend together when I work on various projects with my team.

Finale’s Human Playback (“HP”) feature, originally developed by Robert Piéchaud, plays score markings such as ritardandos, accelerandos, and fermatas, to approximate how notated music will be interpreted in live performance. HP also generates continuous controller data (“cc”) to control dynamics, articulations (note duration) and sonority, which can be very useful, saving content creators a lot of time in downstream production. Finale has various other tools to alter the tempo of playback.

A “tempo map” is a MIDI track containing tempo information in beats per minute (“BPM’), defining the BPM at successive locations in the midi timeline’s bar/beat grid. Finale generates a tempo map when it parses a track and calculates the tempo changes and settings suggested by markings in the score. Finale does not “print” this data to its internal tempo map by default. (Note: Finale does not use the conventional term “tempo map” in its menus or documentation.)

Finale’s internal tempo map can be viewed only by entering View > Studio View and clicking Edit in the TempoTap track — but note: Data only appears in Finale’s internal tempo map, as seen here, after entering the Apply Human Playback dialog (MIDI Tool > MIDI > Apply Human Playback) and committing it to MIDI, or by using TempoTap, or setting values with the MIDI Tool.

Finale’s HP will do its best to interpret information entered in the score dynamically, but problems can arise from Finale’s decision not to commit the HP tempo map to MIDI by default. In some circumstances, Finale’s tempo handling won’t behave as you might expect if you’ve also previously worked in a DAW or other notation editing programs. Here are some common problems I’ve encountered, along with workarounds for them.

Occasionally a team workflow may require an arranger to deliver individual playback tracks (“stems,” also known as “stripes”) to the engineer (possibly the client has approved the Finale playback file and expects to hear the same sounds from the engineer). Delivering Finale’s MIDI file output can work well, but more likely than not the engineer won’t have access to the premium libraries used to generate the sounds. HP’s interpretation of tempo marks can cause unexpected results (modified note durations of the MIDI, etc.), so exporting individual audio stems can be a time-saver for the engineer.

Simply “soloing” the tracks doesn’t work as you might expect — or as it would in any other software. If a track is muted, Finale will ignore its tempo information for export (despite seeming to to work for playback). For example, if you have a ritardando in the score, or a fermata in the top staff only, when another track is soloed, it automatically mutes the top track in the score and its tempo information is ignored for export, causing exported stems not to have the same tempo map, not syncing with each other in the engineer’s DAW.

Human Playback Preferences has a setting to modify the Minimum Fermata Duration in Preferences > Human Playback > Tempo Variations. This is a global setting, and is not retained by the file. If this setting has been modified, the problem will remain unresolved.

The official advice is: Solo the top track and pull its fader down, then solo the track to be exported, then export. (In the graphic below, the first track is an audio track which has no tempo information.) Notice that the top score staff (“Voices”) has the fader all the way down. 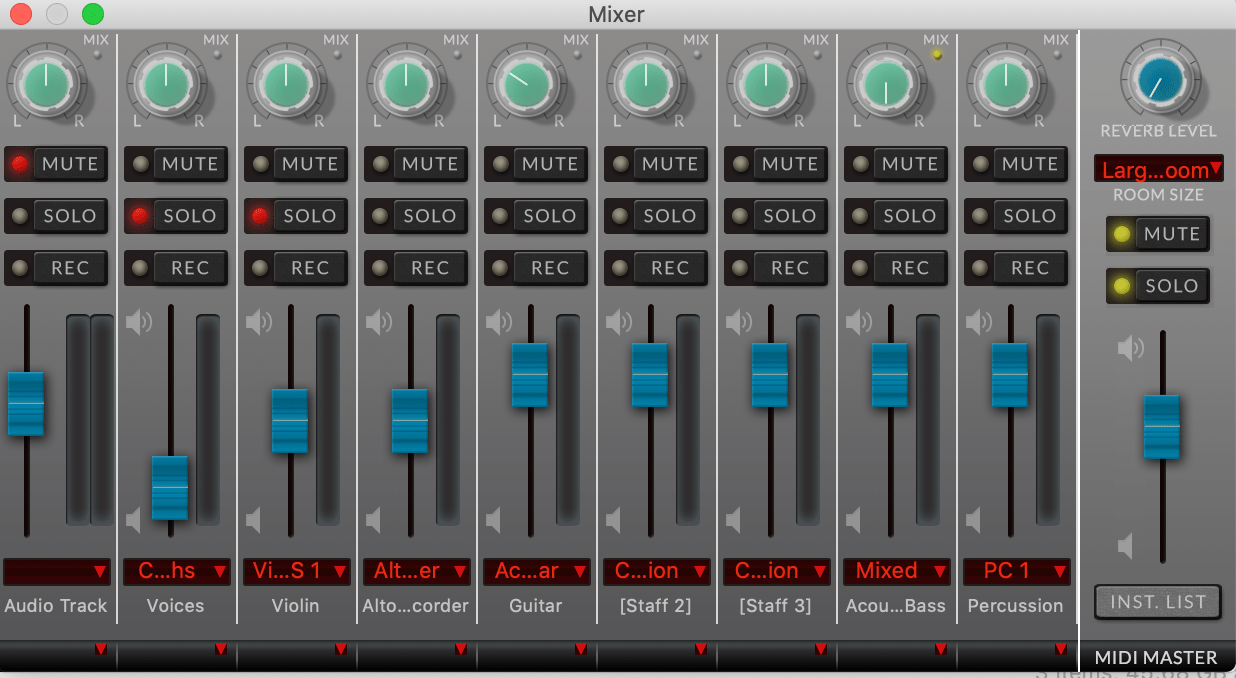 Caution: This fix does not work if the Minimum Fermata Duration setting in Preferences has been modified in the interim. It is possible to create a fermata with a custom duration in the Articulation Designer. This method is less risky to your other files than changing the default Preferences global setting.

After working on this issue some more and experimenting a bit, I found that Tools > MIDI Tool > Midi > Apply Human Playback before beginning any audio export works reliably.

Showing all staves, then starting playback, then returning to your staff set might clear the issue. Finale will calculate the tempo properly and cache the data when all staves are showing.

To avoid the issue completely, always do one of the following:

When using HP, expressions and articulations are Finale’s primary tempo control. HP makes calculations “on the fly” before beginning playback.

If a score has multiple time signatures, tempo marks, and tempo alterations, HP can fail to make all the calculations, losing track when there are too many variables.

Entering tempo definitions with the MIDI Tool at locations in the score where time signature and tempo changes occur can give HP some “anchor” reference points to make it possible to complete all necessary calculations.

Choose the MIDI Tool, then select MIDI > Tempo, and then MIDI > Set To… 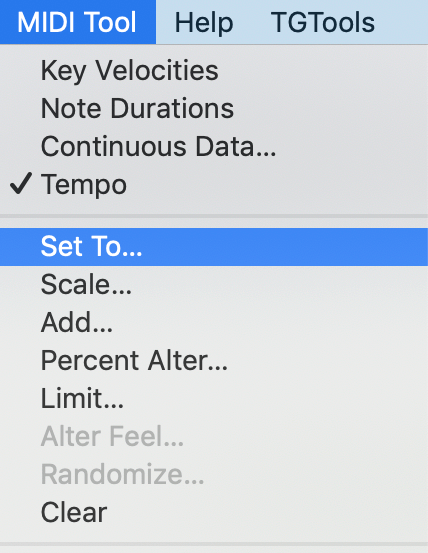 The number in the Set Tempo To: field will define beats per minute for the Beat Duration defined previously in the Time Signature Tool:

Apply Human Playback is a MIDI Tool-only dialog to write HP data selectively to MIDI, possibly including tempo data. If MIDI data is written to Finale’s tempo map with this method, its data becomes usable by all tracks, isolated, hidden or not. 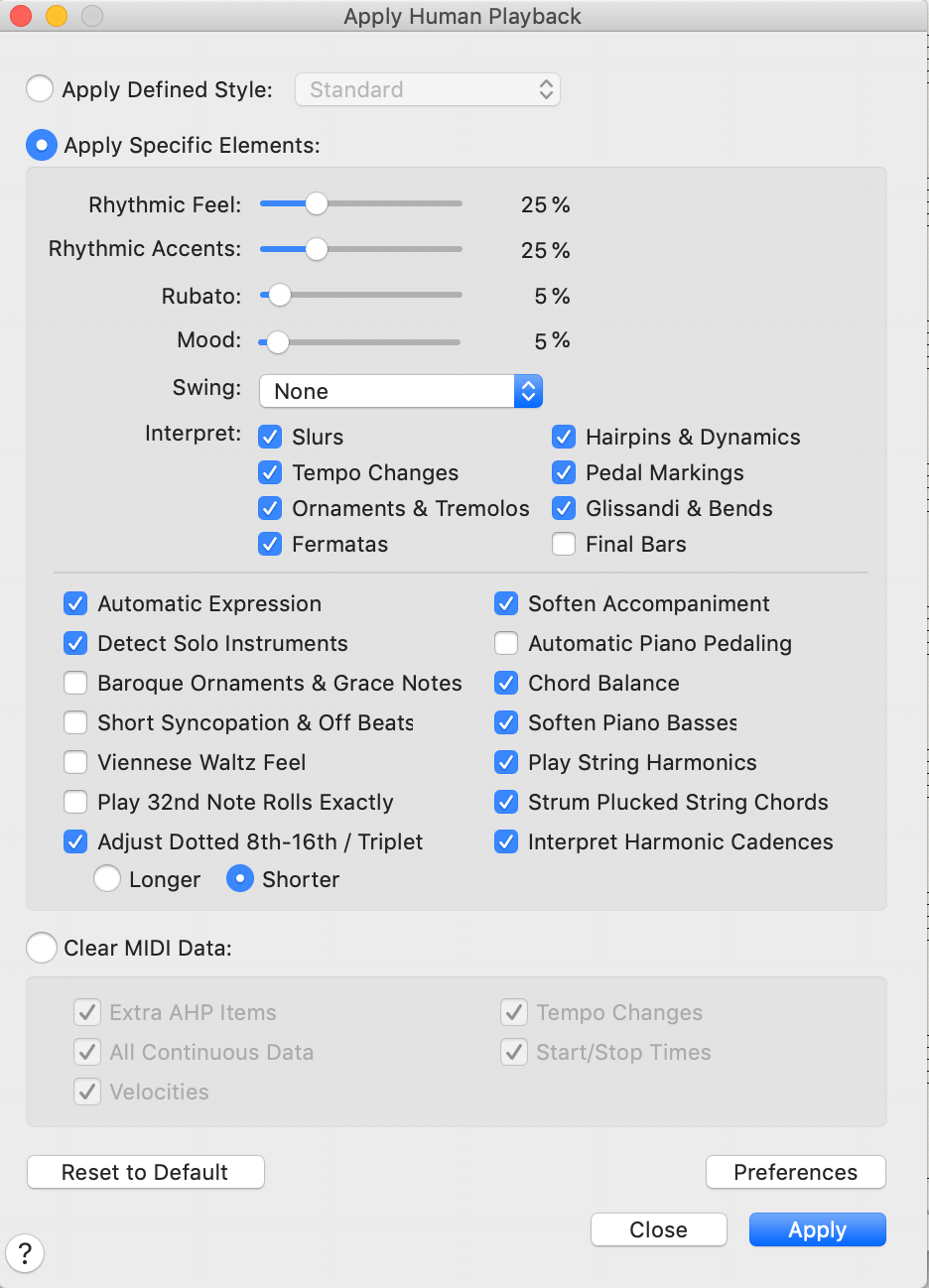 When creating a “sweetening” score for an already-recorded track, the client wants to hear a “proof” or demo of the arrangement over their provided audio file. This is possible entirely from within Finale.

If there are tempo changes, colla voce or other variations in the audio file, a tempo track must be created in order to have the new parts and score match the existing piece. Finale has a TempoTap feature that works well most of the time (Studio View > TempoTap).

Editing with the MIDI Tool menu commands (not recommended)

You will most likely not see any line at first, because HP is designed to work for the instant only. This minimal interface shows a line graph of any data if it has been applied to the Tempo Map (Tools > MIDI Tool > MIDI > Apply Human Playback).

There are no direct controls for the GUI values, and editing tools are only accessible via the MIDI Tool top menu.

First make a selection in the graph line section, then apply an alteration (Set To, Scale, Add, Percent Alter, Limit), and see what happens. You have to close out of the editor to hear what you just did; playback is disabled when the editing window is open. Precise values are not shown in the graph, although they can be entered with the MIDI Tool tools. There is no undo for changes you make; you have to apply the opposite setting to the one you just made. You can erase it and start over with Apply Human Playback.

The window does not resize or scroll. If your graph goes below 60bpm, you won’t see your data in the graph, although you can still select it.

Be advised — when testing this, I found:

Make a tempo map with TempoTap

To use TempoTap, record-enable TempoTap, and the record button in Playback Controls. Tapping the space bar will start playback. Define your first beat, and begin to write your tempo map. If you can stay with the audio pretty well, you’ll have a usable tempo map for your file.

Note that your last implied tempo will become the track tempo for the remainder when you stop tapping. You can always start recording again from another location in the file. If you get to a point in the audio where you reach a known value, you can stop there and just enter the value via Set To.

Import a Tempo Map to Finale from a DAW

There are times when it becomes necessary to create an exact tempo map in a digital audio workstation (“DAW”) such as Pro Tools, Logic, or Cubase.

In the DAW, create a session and import the audio, add a MIDI track and a click track, and do granular, precise editing of the tempo map in the DAW by using its Identify Beat (Pro Tools), Analyze Transients (Logic), or whatever equivalent feature, precisely aligning barlines to the waveform of the audio.

It’s not possible to import a tempo map into Finale directly from an existing MIDI file. There are some reports of success using File > ScoreMerger, but I have not been able to implement this method successfully.

Export MIDI from the DAW and open it fresh into a new Finale file.

Add the audio track, set up the score, and start scoring. Set HP Preferences to MIDI Data > Tempo > Incorporate. Human Playback will ignore any tempo expressions or articulations you add to the score subsequently.

I tried an experiment in an attempt to replicate the problem I had exporting stems that inspired me to write this article. I wanted to find out what Apply Human Playback does to the tempo map.

I created a little piece:

Using MIDI Tool > MIDI > Apply Human Playback, the tempo map was written for the top track as seen below — it completely follows the score markings (except where the tempo graph drops below the GUI and becomes unreadable, notably the fermatas after the Adagio marking).

But, when applying Human Playback to the second staff only (which should be subject to the same score marks) — with the top track muted — the following occurs. The expressions are ignored completely, and only the tempo marks are “printed” to the graph:

No wonder they don’t line up in a DAW!

Once Human Playback is written to the MIDI data tempo map, I discovered that the stems export fine; the tempo map is retained. Without taking that extra step of applying HP to the MIDI with the top staff active, the workaround at the beginning of this article becomes necessary. So, this is workaround no. 2 for the stem export problem! Apply Human Playback to MIDI before exporting stems.

I would really like to see MakeMusic offer the following new Finale features:

Until then, I hope you find these solutions useful in your workflow. Do you have other tips for dealing with tempo maps in Finale? Please share them in the comments!

Finale's HyperScribe tool is a method of recording music into the software in real-time. We will show you how to...

Arranger Jon Burr takes us through some of the technical details that are helpful to know about as you're installing...

MakeMusic has released the first update to version 25 of Finale, officially known as v.25.1. This maintenance update mostly fixes...