In an earlier post I explored using a free font called Numberpile, designed by Ray Larabie of Typodermic Fonts to create circled numbered rehearsal marks in Sibelius. Numberpile uses OpenType ligatures to create beautiful fixed-width circles around numbers from 0 to 200.

When I got in touch with Ray to learn more about Numberpile, he told me about an even more comprehensive font that he designed. It’s called Numbers with Rings, and it uses a system that allows you to generate numbers in rings up to 999999. You can even have ringed letters or letter/digit combinations — truly useful for music scores. 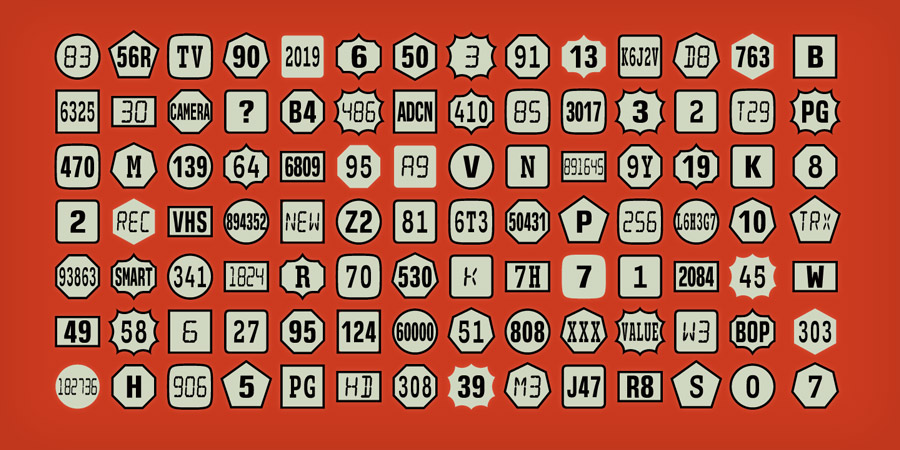 Numbers with Rings is available from Notation Central and it costs $19.95. It works beautifully in Sibelius with a little bit of fiddling, and yes, it is possible to use all of these enclosures: 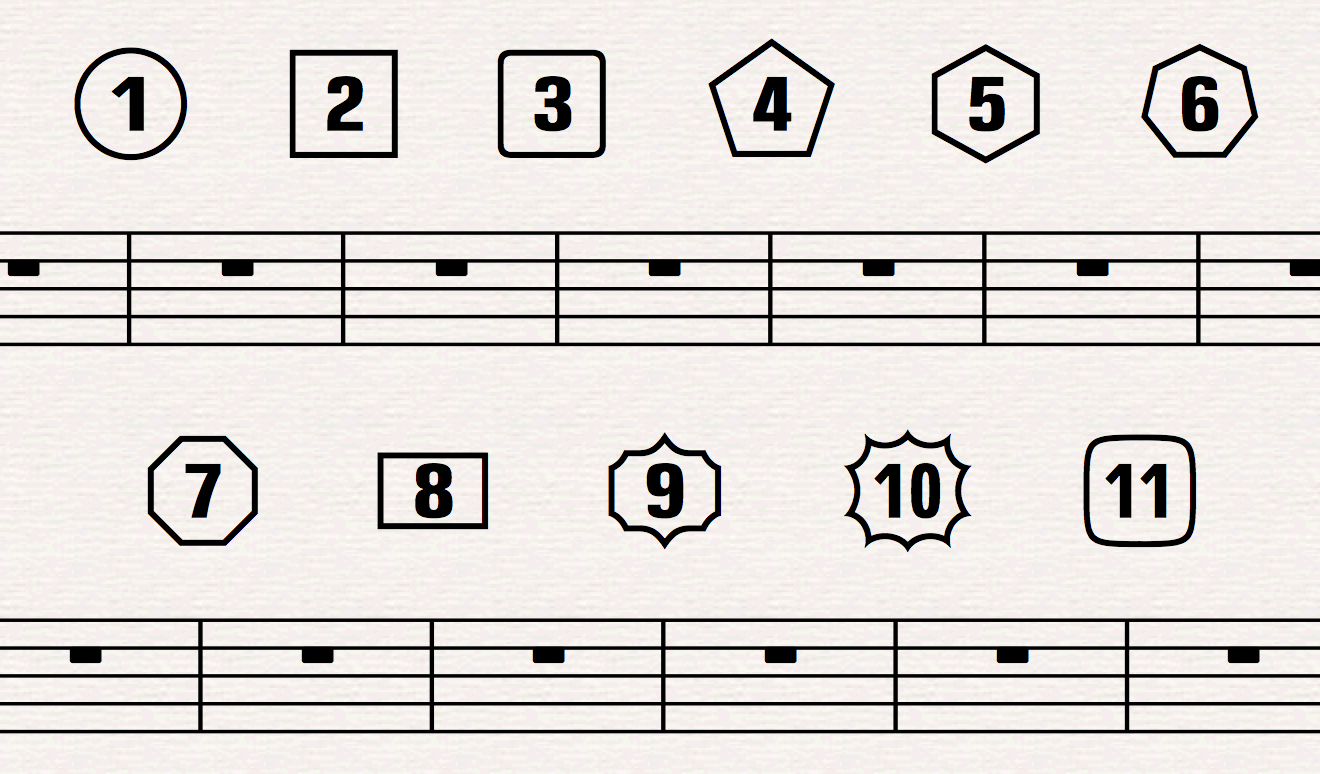 Read on to unlock the secrets of Numbers with Rings.

The Numbers with Rings system

Let’s start with the trusty circle. Its prefix is represented by the letters a through h. It is probably easiest to look at this chart to explain how it works: 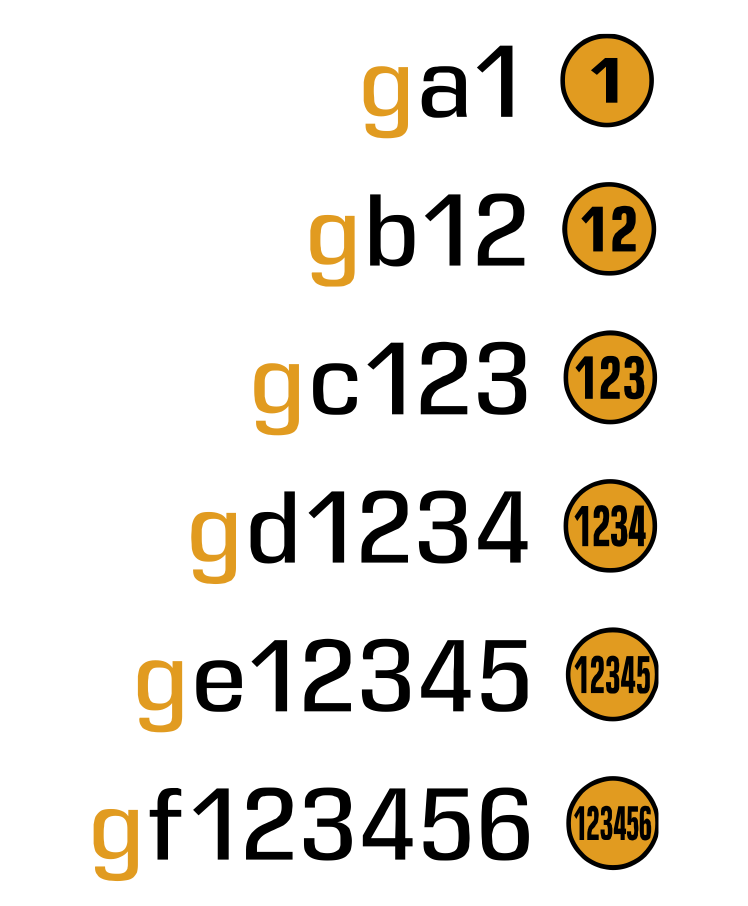 (Ignore the “g” before each series. The “g” draws a filled circle which is designed to be used with characters of a contrasting color, but it won’t work in Sibelius because it’s not possible to have more than one color in the same text object.)

An incredible 11 varieties of shapes are available. Three of them are easy to access with regular letters:

The other eight require delving into the Unicode Private Use Area (more on that in a bit):

The PDF manual for Numbers with Rings contains complete instructions for its use. Next, we’ll explore how to use it in Sibelius.

Using Numbers with Rings in Sibelius

To start off using Numbers with Rings for your rehearsal marks, you’ll first want to set it as your text style, similar to how we did with Numberpile.

Purchase and install the fonts on your computer in the usual way for Mac or Windows. Quit Sibelius if it was running and restart it.

In the Font tab, under Basic Formats, be sure to check the Font box to enable the drop-down menu, and choose Numbers with Rings fonts. In the Style menu, you effectively have three options: Sans, Serif, or Digital.

I’ll choose Sans, but as you can see from the examples in the first image in this blog post, Serif is a very appealing choice as well. (If you’re nostalgic for the days of Speak & Spell, Digital is spot-on!)

You can always adjust the size of the font later to suit your score.

Next — and this is important — go to the Border tab and, under Shape, be sure that both Circled and Boxed are unchecked. Otherwise, Sibelius will draw its own enclosure, which you don’t want.

Next, you’ll want to get Sibelius and Numbers with Rings to work their OpenType ligature magic. Go to Appearance > Engraving Rules and choose Rehearsal Marks. In Appearance, choose the numbering option you prefer (unlike Numberpile, Numbers with Rings can work with all letter and number combinations).

Click OK to exit the dialog. Place the rehearsal marks in the usual way. Sibelius will automatically respect the ligature that is created every time you place a new rehearsal mark.

This works for single-character marks, but once your marks cross into double-digit territory, you’ll need to make an adjustment. To do this, select the bar that contains the first mark with two digits (e.g. rehearsal 10).

Leave the Consecutive radio button selected. Check New prefix/suffix and also check Override defaults to tell Sibelius to override the original prefix in Engraving Rules. For this example, to use a circle with two digits, type b. 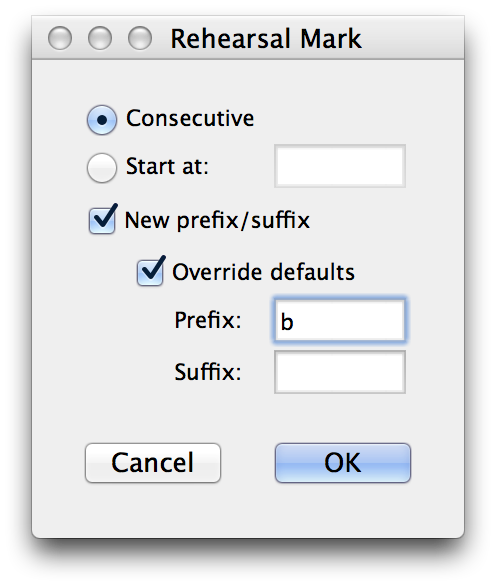 Now, the enclosures from this bar forward will accommodate two characters.

Once you have the need to accommodate three characters, you would Restart Sequence again. This time, the prefix would be c. For four characters, it would be d, and so on.

The remaining eight enclosures are a bit trickier to access but far from impossible. To do so, you’ll want to use the Character Map if you’re on Windows.

If you’re on Mac, you can hunt and peck in the Character Viewer, but it’s not entirely useful for this purpose. To more easily browse the glyphs in Numbers with Rings on Mac, you’ll want an app such as PopChar X for €30 or xScope for $50 (I’m using PopChar). 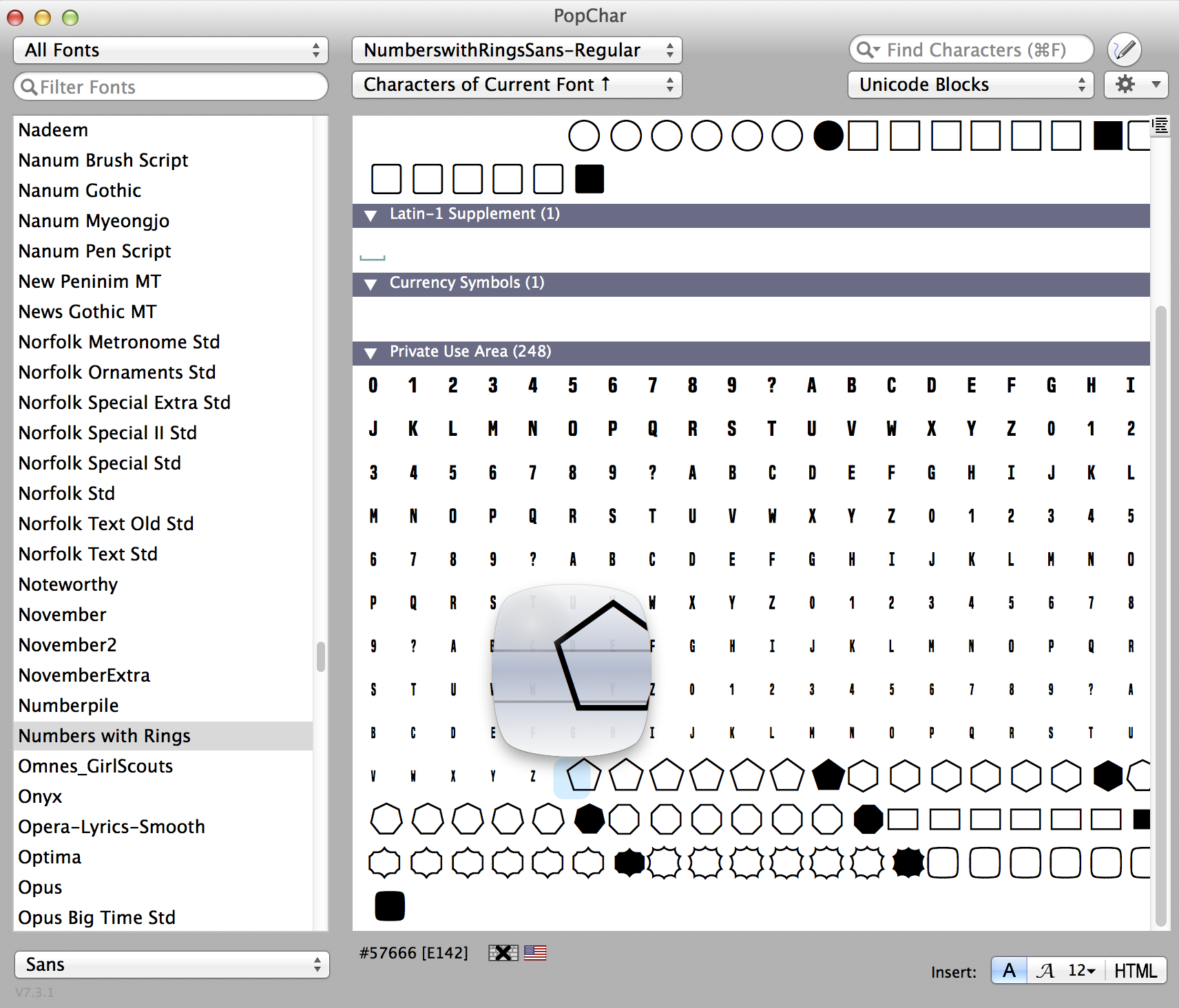 This way, you can select the appropriate enclosure and insert it in the correct place in Sibelius. Don’t be alarmed if the character doesn’t display in the dialog box:

It’s there and will display perfectly fine in your score.

What about using Numbers with Rings in other programs and/or for other purposes besides rehearsal marks? Both are possible, to an extent.

Numbers with Rings works well in Dorico and the process is broadly similar to Sibelius.

Be sure to go to Engrave mode and set Font Styles… to Numbers with Rings and choose the desired style. 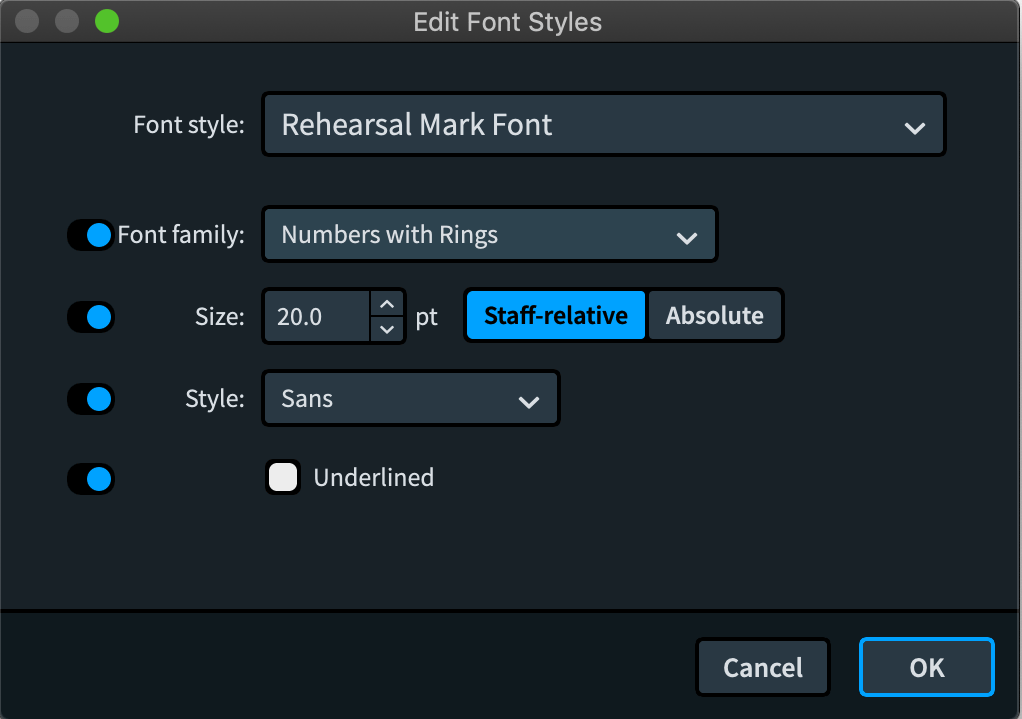 Head over to your Engraving Options > Rehearsal Marks and set the Custom prefix to the appropriate setting: 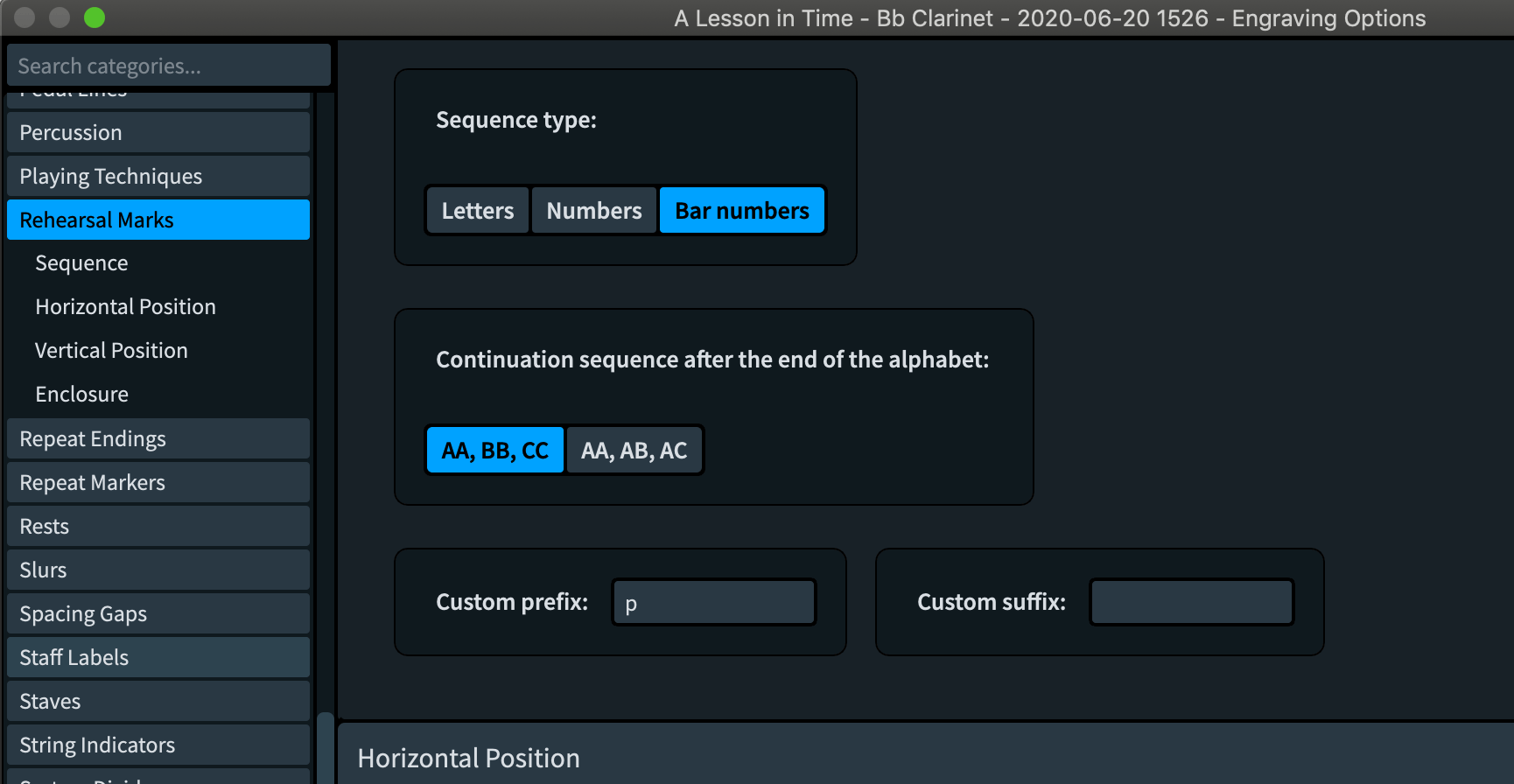 Also be sure that, in Enclosure type, No enclosure is chosen.

You can change the Sequence type and other settings on a case-by-case basis using the Properties: 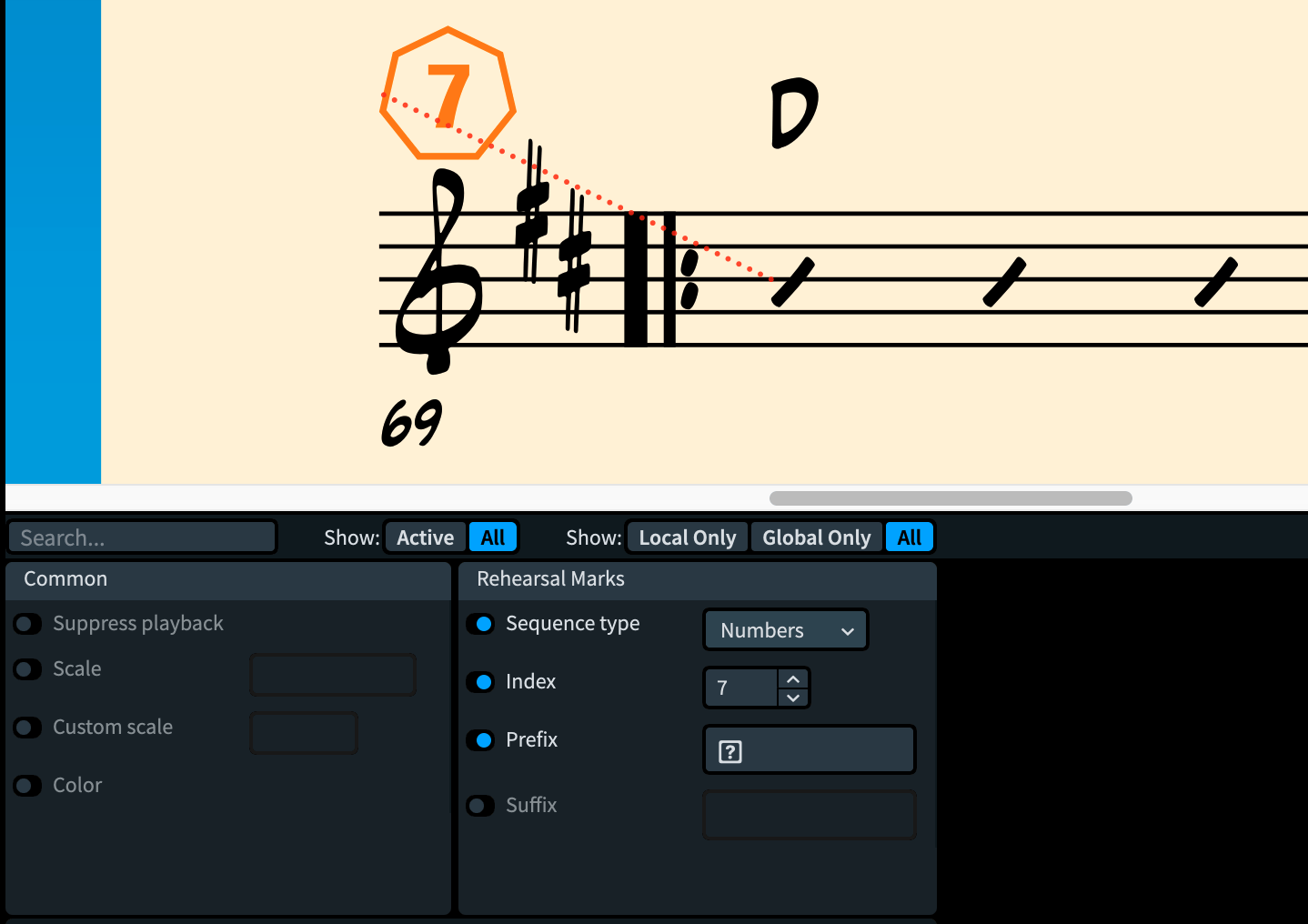 Numbers with Rings appears to work somewhat in Finale for single-character marks.

To start off using Numbers with Rings in your rehearsal mark, you’ll first want to set it as your text style, similar to Sibelius.

You can always adjust the size of the font later to suit your score.

Next, go to the Expression tool and click on the first bar where you wish to place your rehearsal mark and choose the Rehearsal Mark category. Finale default documents offer a few options; let’s select the 1, 2, 3, 4 style to work with. Select it and click Edit… to open the Expression Designer.

Presumably Auto-Sequencing Style is checked; if not, check it. For the Enclosure Shape, choose None; otherwise, Finale will draw its own enclosure, which you don’t want.

Next, you’ll want to get Finale and Numbers with Rings to work their OpenType ligature magic. 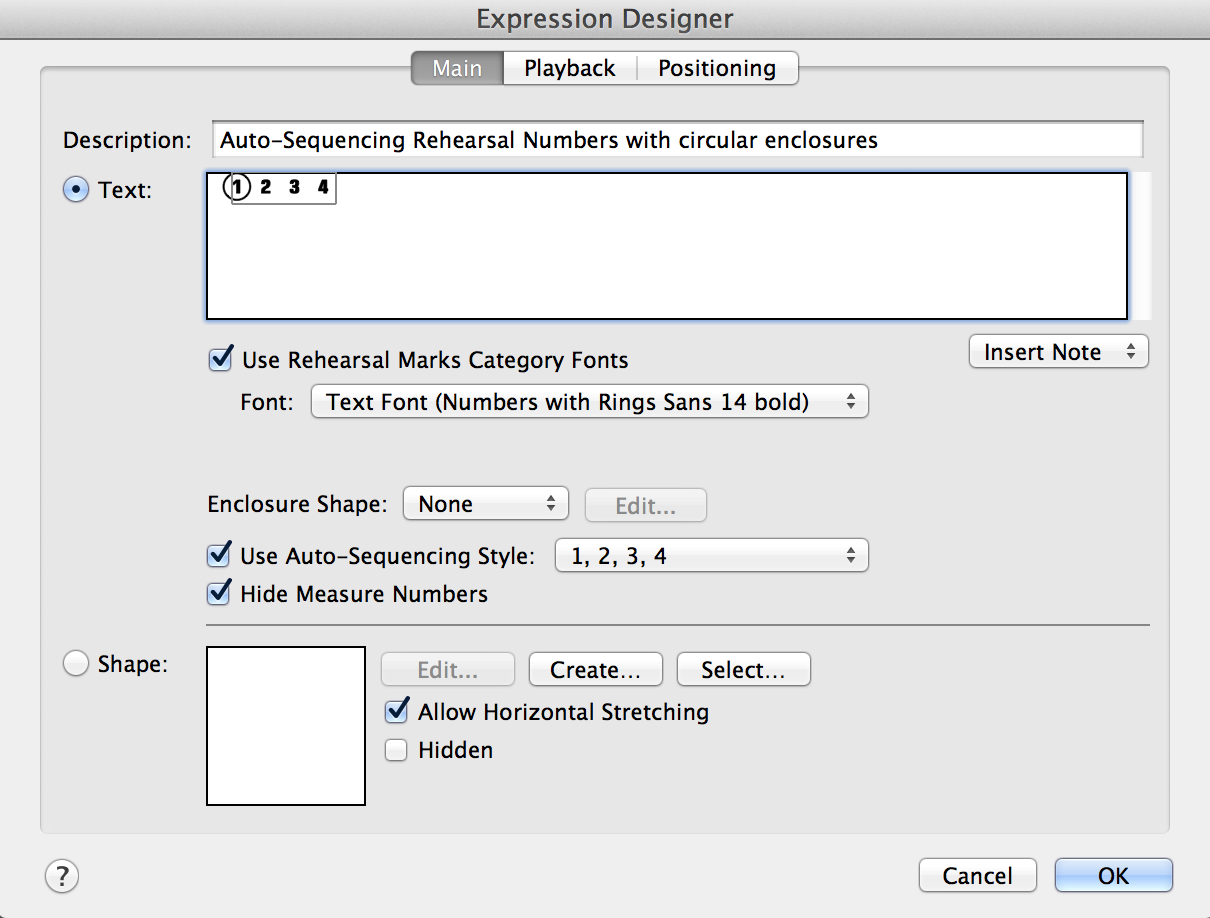 Click OK and then Assign to place the mark in your score. Place subsequent marks in the usual way or assign a metatool. Finale will automatically respect the ligature that is created every time you place a new rehearsal mark.

This works for single-character marks, but once your marks cross into double-digit territory, I was unable to get Finale to create the correct ligature with automatic sequences. I tried creating a new expression with a new prefix, and restarting the sequence at the appropriate number, but it didn’t work. I was able, however, to manually type in a mark with more than one digit. I created the example below by typing b11:

Of course, Finale offers a range of enclosure shapes already via the Enclosure Designer.

You can set the style of the rehearsal mark in Musescore by going to Style > Text… and choosing Rehearsal Mark. Your options are somewhat limited; I couldn’t find a way to select the Serif or Digital variants. Be sure that Frame is unchecked to prevent Musescore from drawing its own enclosure. 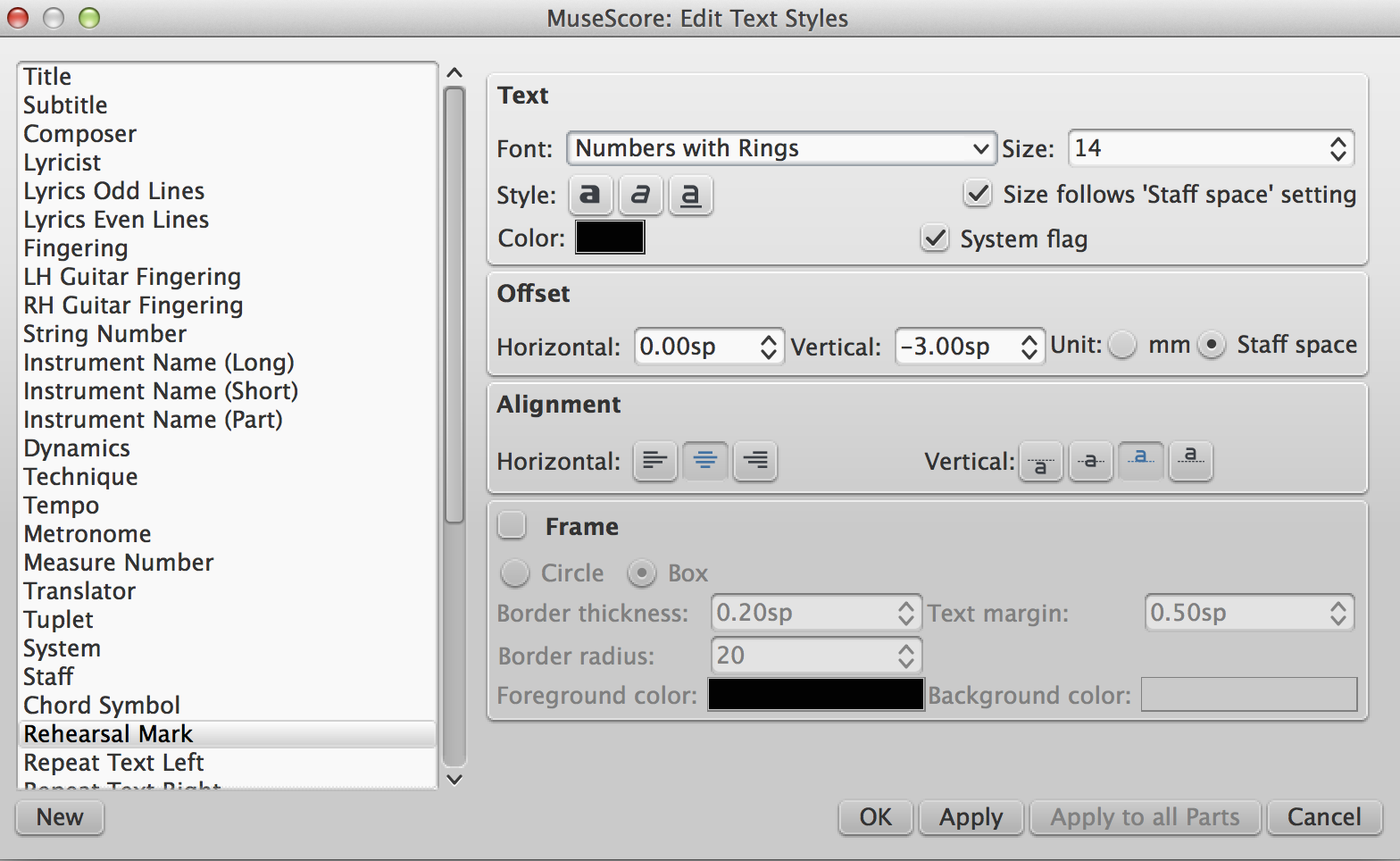 There is no way to apply a prefix to an automatically sequenced rehearsal mark in Musescore. However, you are able to manually type a prefix if you apply a rehearsal mark by clicking the bar in which you wish to place it and type Ctrl+M on PC or Command-M on Mac, and then, for example, type c123 to achieve this: 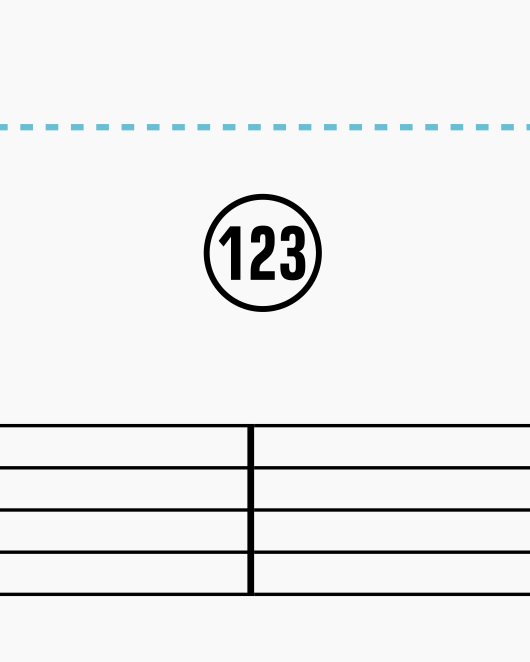 As an aside, it’s worth noting that Finale and Musescore can natively draw rounded corners on boxed rehearsal marks, without the need for a special font like Numbers with Rings. In Finale, this is setin the Enclosure Designer, when Round Corners is checked. In Musescore, this is set in the Border radius field, when you use a boxed frame.

Like Numberpile, you’re not limited to using Numbers with Rings for rehearsal marks only. You can distinguish special sections or conductor cues, for instance. Because the enclosure is part of the font itself, you can include it in a single text object alongside other fonts (see the post on Numberpile for instructions).

You can also use it in other ways (enclosure E15A)…

How long do you think it will be before someone writes that in a piece, and a performer posts a picture of it to Facebook?

Until then, and thereafter as well, consider getting Numbers with Rings and have fun using it in your scores!

Notation Central is a marketplace for music notation technology, with fonts, utilities, templates, plug-ins, and more, helping you create music...

By making a few easy adjustments to your document's settings, you can use the free Numberpile font to place more...