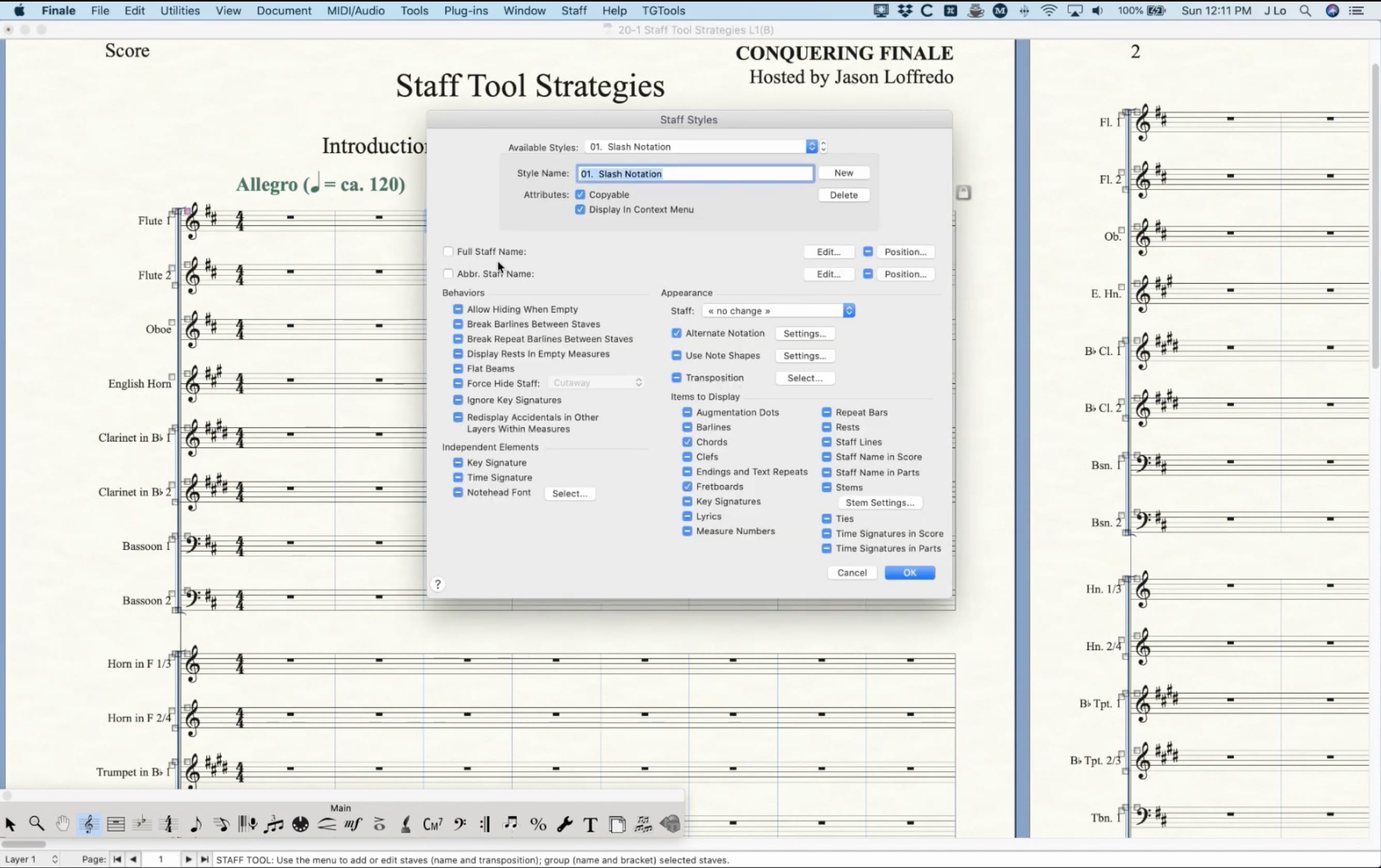 The importance of the Staff Tool in Finale can’t be underestimated. This very large series of videos will be well worth your time because a deep understanding of the Staff Tool is a critical part of Mastering the program. I’ll walk you through an introduction of the Staff Tool, present some concepts and tease a few features of the Staff Tool which will be covered in later videos. Starting at 6:57, I’ll show you how to simply add staves and at 9:55 I’ll show you a few ways to delete them. And finally, there are a couple of ways to reorder your staves so I will cover both of them at 12:45.

One of the main features of Staff Attributes in Finale is the Items to Display section. This is where we can show or hide specific elements of the staff or the music on a staff by staff basis. Everything from Augmentation Dots to Time Signatures can be shown or hidden as needed. There are several items here that relate to other topics and as I go through the list of Items to Display I will refer you to other videos to learn more in-depth about some of the implications of showing or hiding those items. Finally, there are some unique applications for hiding most things but showing just a few things and I’ll give you a couple of examples of that towards the end of the video.

Alternate Notation is a powerful feature of the Staff Tool that allows you to put specific “skins” over top of the notation in your staves like Slashes, Rhythmic Notation, One and Two-Bar Repeats, and even Blank notation. Generally, Alternate Notations will be used as Staff Styles but they are also possible as Staff Attributes which will apply them to the entire staff. There are instances where that is actually handy, but generally, they will be better as Staff Styles. However, the theory and functionality of Alternate Notation are exactly the same in both uses so you can apply the lessons in this video to Staff Styles as well.

In this advanced-level video, I’ll show you how to use different fonts for the noteheads on any given staff. This usually goes hand in hand with using Note Shapes which allows you to choose different font characters per pitch class or per scale degree. This is how the Finale AlphaNotes font is used, and although there are templates already set up for AlphaNotes I’ll show you the way that Finale sets them up in case you need to customize them. In addition, I’ll look at the rest of the Stem Settings in the Staff Attributes. The horizontal and vertical locations of where the stems start and end are all customizable if you know how to use the Stem Settings window. This is where the stems for TAB staff get setup as well.

The Global Staff Attributes… Plug-in is an important tool that will allow you to make changes to the Staff Attributes of multiple staves at once. It’s similar to other mass-change windows in Finale, but just knowing that it’s available and how to use it will go a long way to making short work of the Staff Attributes feature in Finale. There are even a few Group Attributes settings that can be changed en masse in this plug-in.

Lesson 3A (basic): The Basics of Staff Styles

In this introduction to Staff Styles, I’ll teach you the theory of how and why Staff Styles work but I’ll also show you everything you need to know about adding Staff Styles in multiple ways, including with metatools, but also how to apply them to either the Score AND the Parts or just the Score OR the Parts. And there are a few different ways of removing them as well. In addition, I’ll give you a quick tour of all of the Staff Styles that exist in the default document in Finale.

This is an essential video for anybody that wants to make the most of Finale. Being able to understand and create custom Staff Styles will allow you to do almost anything you can think of. I’ll give you a rundown of how to create your own Staff Styles here and I’ll also give you just a few examples of the seemingly infinite number of things that can be achieved with Staff Styles. I’ll also talk about programming metatools for Staff Styles.

In this special video, I’m gonna show you some practical uses for Alternate Notation Staff Styles that will really come in handy. I’ll look at some variations of the Blank Notation style for use with orchestral cues (0:24) and some alternate Slash Notation Staff Styles that will allow you to have slashes while still showing other notes; useful for drum parts (6:26). And there are a couple other neat tricks that I’ll show you as well.

Staff Groups are where you can set properties for things like Brackets, Barlines between Staves, and Names for grand staff instruments among other things. The Group Attributes window is where most of these settings are so this video will take an in-depth look at that. At (17:34) I’ll show you how to add new Groups and remove existing Groups. And finally, at (24:31) I’ll discuss Groups as they relate to Linked Parts.

The Staff Groups for three staff organs are set up in a unique way in Finale. This video explores how Finale sets these up out of the box and discusses a few ways of manipulating these Groups to create some alternate staff labeling or even bracket layout.

This advanced video takes a look at the few things that can be done to stretch and move the brackets in your score as well as the almost infinite ways you can redesign the piano braces. I’ll also show you a solution for when you need to have a piano brace appear on a single staff.

This is a comprehensive look at Staff and Group Names in Finale. Changing the names of staves, auto-numbering like instruments, and all of the implications that changing names has with Linked Parts are all covered. I also talk about what happens with the Staff Names when staves actually change from one instrument to another. Finally, I’ll show you how to use Staff Styles to temporarily override the Staff Names for any series of measures that you select.

Staff and Group Names have a set of default positions that can be changed globally rather easily if you know where to look. Names can be Left, Right or Centered aligned, and the precise position of the names relative to the staff can be set as well. There are also settings for how names with multiple lines get justified. In addition, any given Staff Name or Group Name position can be set independently for that Staff or Group. And Staff Styles can even be used to change the position of a Staff Name position on a single system if you need to. There are a lot of options when it comes to Staff and Group Name positioning but hopefully, this video will take some of the mystery out of it.

The way that Finale labels instruments by default is generally accepted as the most usual way to do that. There are other ways that are also acceptable but they require a little bit of manipulation with the Staff and Group Names. In this video, I’ll walk you through several common alternate ways of labeling your staves including a few different ways to handle similar, numbered instruments. I’ll also show you how to do vertically typed names, and even sideways typed names for groups of instruments or even entire choruses.

Using the Staff Attributes, it’s possible to force hide staves in three unique ways. In this video, I will discuss exactly how that works and also give you some practical applications for force hiding staves. In addition, I’ll talk briefly about force hiding staves as Staff Styles which can come in handy in certain scenarios.

Hiding empty staves, or what Finale used to call Staff Optimization, is relatively straightforward but understanding some key features of how Finale handles empty staff hiding will go a long way in ensuring that you’re doing the most efficient thing. Finale even has a unique way of deciding what staves are empty in the first place. This video will help you realize exactly how Finale handles staff hiding and will give you some useful techniques for making quick work of this process.

Staff Spacing, whether done at the beginning of your process or towards the end, is an important part of making your scores look good in Finale. This work can be incredibly tedious if you don’t know the techniques and tools available to make changes to large selections of staves. This video will teach you those techniques and tools so that you’ll never be tediously moving one staff at a time forever and ever! At 9:08, I will show you the all-powerful Respace Staves… utility. If you’re not aware of this utility, this lesson is going to change your life. At 13:37, I’ll discuss Staff Spacing in Scroll View, and at 15:44, I’ll walk you through a finished piece to see how all of these techniques come together to make short work of spacing your staves.

This request comes from Jorge Hoyos Rentería, and it’s all about String divisi. Dividing strings into multiple staves in Finale is no walk in the park, but if you have a solid understanding of the Staff Tool the job becomes much easier. This tutorial comes hot on the heals of the completion of the Staff Tool Strategies series of videos, so this is a great way to put all of those lessons to practical use. I’ll show you simple multi-staff divisi and more complex divisi involving cutaway scores. I’ll also show you how to make this all work for Linked Parts. This is a lengthy one, but it will be well worth the time because this video is chock-full of helpful information. 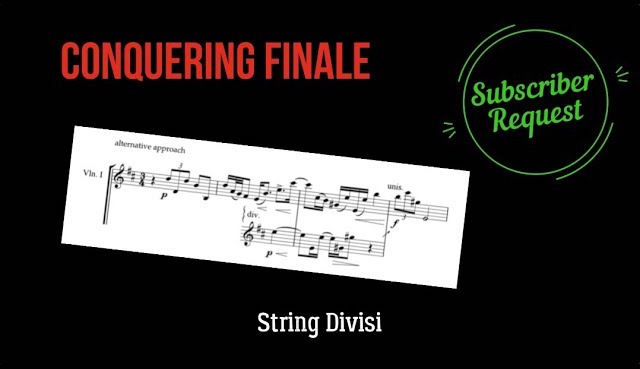