This blog post is written by Bob Zawalich, composer, guitarist, software designer, and creator of hundreds of useful plug-ins for Sibelius. In this post, Bob explains the differences among the types of text used in Sibelius, such as staff text, system text, and lyrics, and covers some tips and plug-ins for changing one type of text to another.

Objects in a score

Sibelius scores are made up of elements called objects, each of which has different properties. A score is an object, as is a staff and a bar. There are a number of bar objects, which live inside bars, such as notes, lines, barlines, chord symbols, and tuplets. Here is the whole set of them, courtesy of the ManuScript plugin language reference: 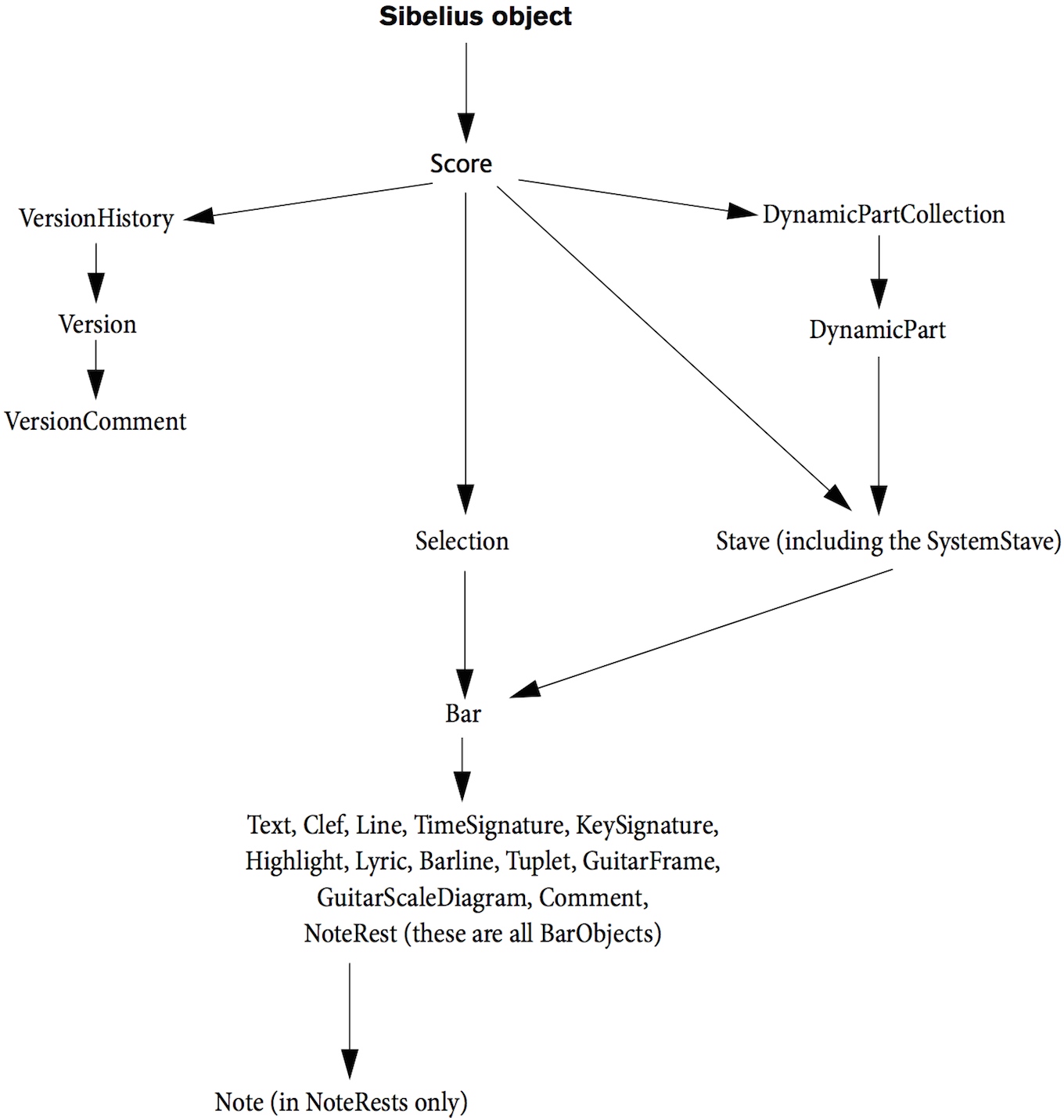 This diagram, however, leaves out some of the available objects, and hides the fact that there are separate staff text and system text objects in a bar, and these have different properties.

In Sibelius a lot of objects look alike but behave differently. You can create text objects using a variety of text styles, but text with Rehearsal Mark text style will not update like a real rehearsal mark object does. You can make text with Chord Symbol text style (this is what legacy chord symbols are), but you cannot get a chord diagram from these, and you cannot create them directly from a MIDI keyboard, and they format differently. These “imitation objects” have specific uses, and can often be used to fake something Sibelius does not support, but while these look like text objects, they do not behave like text objects.

There are three main text object types: staff text, system text, and lyrics. Each of these supports a number of text styles.

System text (Title, Lyricist, Copyright, etc.) is attached to the invisible system staff. It has the same properties as staff text objects, but it will appear in every part, and can be made to appear in multiple staves.

Lyrics are attached to a single staff (like staff text), but have additional properties beyond those of text objects.  A lyrics object has a duration like a line, and is associated with a number of notes. It also knows if it is at the middle of a word or at the end of a word, so it can deal with hyphens.

In Sibelius 7, if you look in the Text tab of the Ribbon with the title selected, you will see that you can change the text style, but only to another system text style:

Select a piece of Expression text, and the available styles are all staff text styles: 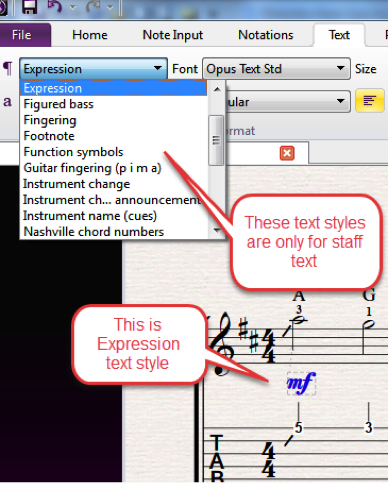 Selecting some lyrics will yield a similar result. There is actually a fourth type of text, which is blank page text, a variant of system text that can only be used on title pages and blank pages.

In Sibelius 5 and earlier, the Properties window was willing to let you assign a text style from one type of text to a different kind of text object, such as assigning a lyrics text style to a piece of system text: 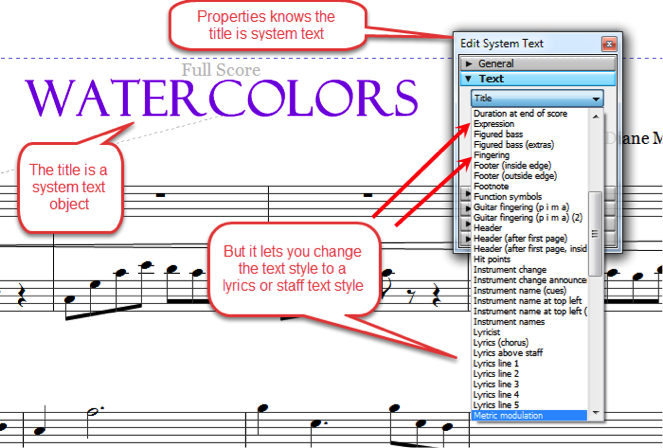 However, this was often confusing. It did not change the system text object into a lyrics object, it just changed some of the properties available to the text style, like the font and italic property. The title did not get a duration, and it was still attached to the system staff.

You can change the text styles of a staff text object to be any of the available staff text styles, and after you apply Appearance > Design and Position > Reset Position, you will have changed (for example) Technique text to Expression text. Similarly you can change lyrics that have the style Lyrics line 1 to be Lyrics line 2, and after you Reset Position the lyrics will be on line 2.

But even if you could change the text style of the title to have Expression text style (as you could easily do prior to Sibelius 6), it would still be a system text object.

Changing one type of text to another type

You cannot actually do this.

What you have to do is create a new object of the desired type, and then delete the original object. So if you mistakenly created all your lyrics as Technique staff text objects, you can’t just change the text style to be Lyrics line 1 and have them function as lyrics. They might acquire the correct font and vertical positioning if you make such a change, but they will not hyphenate or show line extensions. They are still not lyrics objects.

Plugins can be written to automate the replacement process, but since the objects have different properties, some approximations and guesses need to be made. The free downloadable plug-in Lyrics To Expression Text (category Text) will convert lyrics objects to Expression text objects, assuming they had been incorrectly entered. Note that it is easier to create a text object from a lyrics object than the other way around, because the text object has fewer properties. There is no plugin to convert in the opposite direction, which would be harder.

Roman Molino Dunn offers plug-ins for sale on his web site, including the plug-ins Convert Staff Text To System Text and Convert System Text To Staff Text. Roman can also be commissioned to write custom plug-ins.

A somewhat related plug-in, Swap or Replace Text Styles (category Text) will let you swap the text styles for all the objects of a given style in a given type. It will let you swap Lyrics line 1 for Lyrics line 2, or Technique for Expression. Like Sibelius 7, it restricts you to swapping and replacing styles within an object type. Sometimes styles of different types will appear in the list boxes, but if you choose styles from different types the plug-in will disallow it. 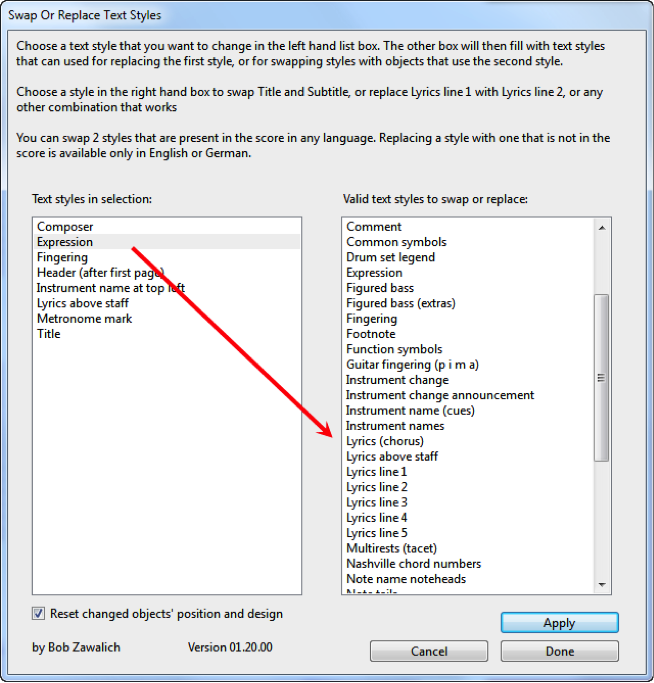 A Sibelius plug-in which will speed up working with text, allowing you to quickly swap one text style for another;...