In this first of a series of videos, composer Ian Blick illustrates how to replicate a 16th century ayre using Emvoice One voice synth and Dorico Pro 4 notation software. With the help of soprano Charlotte Potter, Ian discusses how to make Emvoice One emulate the voice of a trained singer, adding more realism to the score which has been produced in Dorico Pro. 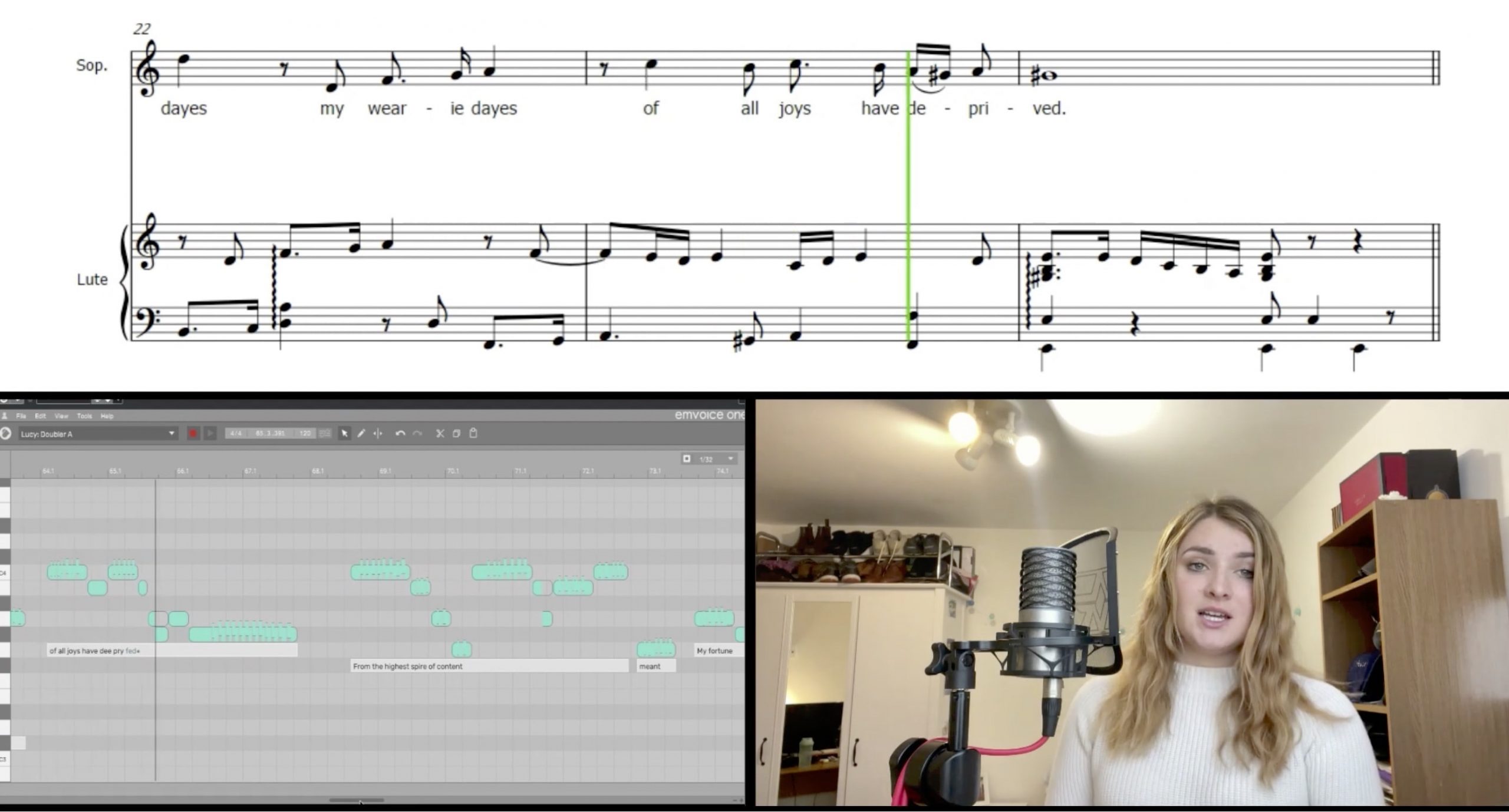 A table of contents and a lightly edited transcript follows.

In this video tutorial, I’ll be showing you how to create realistic voices from a written score using Dorico Pro and Emvoice One voice synthesizer. We’ll look at how to emulate the singing style of a professional singer with the help of soprano Charlotte Potter, and look at how to add realistic vibrato and phrasing to the score, as well as showing you how to add text to a melody and change the pronunciation of the words to fit the style of the music.

I’ve chosen to score a 16th century piece by the composer and lutist John Dowland. As you can see, I’ve already scored eight bars of the piece for soprano and lute and have assigned two VSTs in Dorico to play back the music. One is the Emvoice VST and the other is a loot from Cinematic Instruments that runs through the Halion Sonic Sampler from Steinberg.

To get MIDI information from Dorico into Emvoice, we need to press the Record button and start playing Dorico from the chosen note. You can see that Emvoice reads this information and turns it into blocks of sound in real time. It’s worth noting that you need to have an internet connection because all of the processing is done in the cloud. 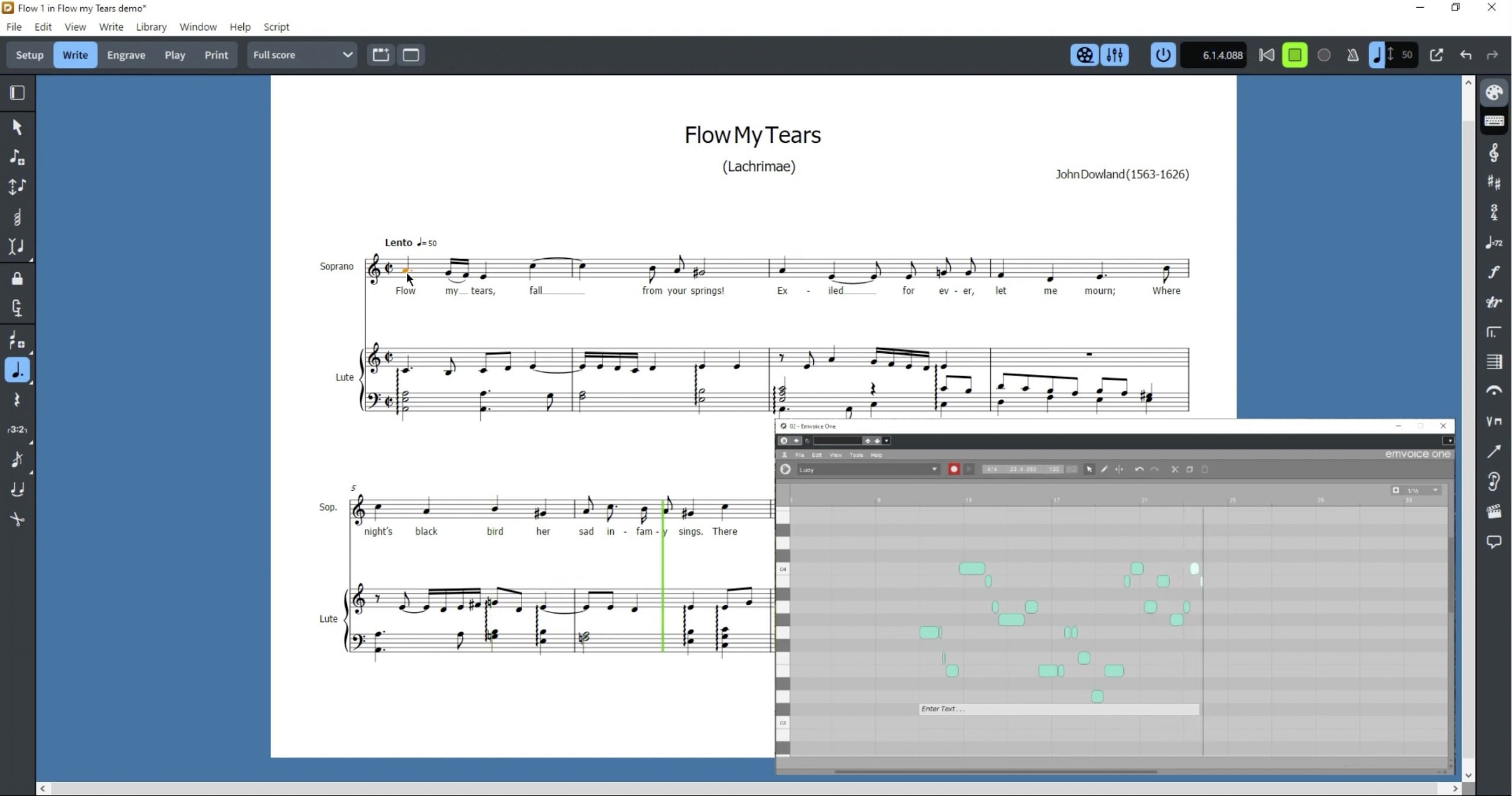 Although you can hear just the lute part playing, the soprano part is being sent from Dorico to Emvoice without sound, because it only accepts MIDI information from Dorico. It doesn’t create a live playback sound in real time. You can assign a plug-in inside Dorico to play back music in the normal way. But you will have to reroute Dorico back into Emvoice for it to read the MIDI information you send like this. Or, as in my case here, just send the notation without sound.

Now that this process is completed, you will notice that there sometimes is an error message, which tells you that the region is too complex, which is not a problem because you can nudge some of the blocks around to break up the phrases like this.

By pressing Ctrl+Alt on PC or Command-Alt on a Mac with a left mouse button, you can grab selected notes and move them around in small amounts. This splits the phrases, which I like to do when working with sentences when inputting lyrics. And it makes it easier for Emvoice to process longer passages of music.

You can also expand the view with the plus and minus symbols in the bottom right of the editor to make it easier to read.

We can now audition the notes to make sure we’ve got all of the correct pitches recorded. It’s worth noting that you can choose one of three separate voices that you purchase with the Emvoice plugin, depending on what you’re scoring for. Two of the voices called Jay and Lucy, are male and female voices, with Thomas being great for use if you want a vocoder sound.

Each voice also has a range of variants available. That gives you lots of scope if you’re scoring for larger ensembles, like choirs or backing vocalists, and you want a much bigger sound in your playback. It’s something I will be covering in another video in this series. So do subscribe to my channel and you’ll be notified when it’s available.

As we are scoring for female, I’ll choose Lucy’s voice and have a listen to what she sounds like. By default, she sings to a simple “la” sound. It’s great for checking you’ve imported the correct pitches from your score.

OK, it’s simple enough. But what I really want to do is to make this voice sound much more like Charlotte’s voice you heard at the start of this video. Firstly, let’s type in the original words of the song. Emvoice treats every block of sand to fit with one syllable of your lyrics or text. This is OK, but often a word or just one syllable can extend over many notes.

This group of notes, called melisma, can be achieved really easily in Emvoice. I’ll show you how in just a moment.

Now we’ve entered the lyrics. Let’s press Play and see what it sounds like. 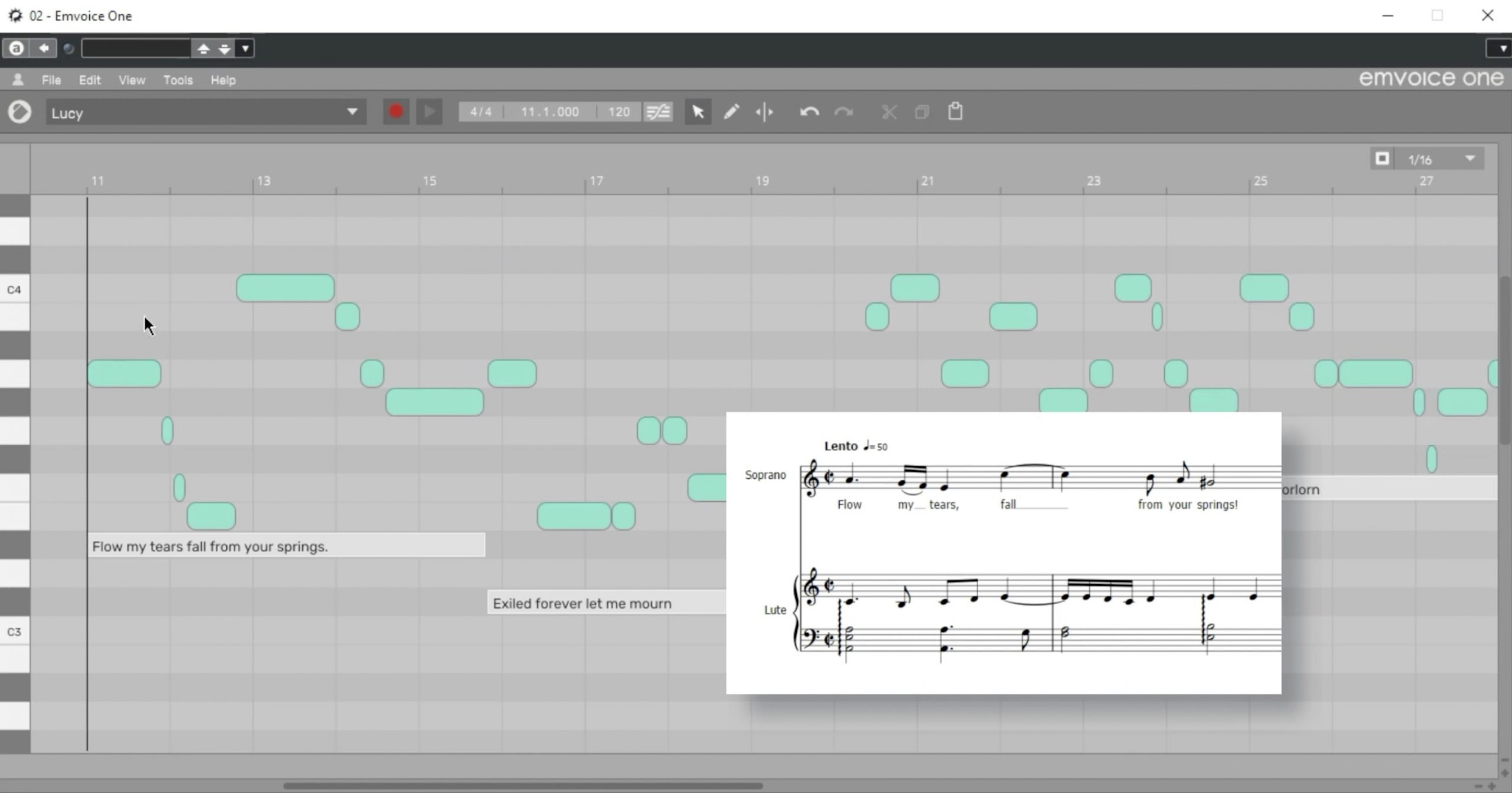 OK. It’s clear that there were a couple of issues with the way that Emvoice interpreted the notation, especially with the melismatic phrases in the first bar of the piece. You can hear on the word “my”, it hasn’t recognized the melisma there.

There’s an easy way to change this, and it is by taking just one block of sound and treating it as one word. If we take away one of the notes, because it’s unnecessary, and extend the second note, we can click on the pencil tool or press Shift+A to split that block into two notes, but just for the one word.

Once we have two parts to the block, we can change the sound of the second so it matches up with the F semiquaver in the score. And if we listen, it should play the melisma fine now.

The other discrepancy was in the seventh bar on the word “forlorn”. Because we’ve used up all the syllables in the words, Emvoice substitutes a “la” at the end, which we obviously don’t want.

We can do the same as before by removing two of the blocks, extend one of them and then split the block into three, which will match up with the first syllable in the word “forlorn”.

Another nice thing that can be changed, and again, I’ll make another video on this in the future, is pronunciation. In this piece, we want to have Emvoice to sing with less of an American accent. So we can change the pronunciation of words by creating other homophones in their place. For example, I’m going to change the last syllable of “forlorn” to sound a little bit more Anglicised. Notice here, how Emvoice changes to red when it doesn’t recognize a word in its database, but you can substitute another homophone if it recognizes the word in its dictionary.

We can substitute a different homophone for the word “lorn” to see how the pronunciation changes.

There’s a lot of flexibility here with the way Emvoice can pronounce words. There is a cheat sheet available online and through the plug-in that gives you a list of the phonemes available and how to change the pronunciation of words. Although these phonemes are taken from the English language, I’m sure that with a bit of creativity, words from other languages can be created too— perhaps even some Latin, which would be great for those of you who score film music that requires a Latin singing choir.

The next thing we’re going to look at is how to add vibrato to our vocal playback to make it sound more like Charlotte’s trained voice.

Let’s just listen to the first phrase and notice where she adds the vibrato and how much depth there is to the sound.

Let’s look at that vocal phrase as a wave form and see how much the amplitude of the wave changes throughout the phrase.

What we want to replicate is the frequency of these oscillations to create a natural sounding vibrato in Emvoice.

Let’s try it on the word “fall”, which has a strong vibrato. If we count the number of peaks on the wave form— which is two smaller ones, seven larger ones, and then two smaller ones at the end— we can do this by slicing the block into a few different sections like this, by using the pencil tool or pressing Shift+A as a shortcut.

Also note that the amplitude of the wave is higher for the seven in the middle, which we can adjust as a group like this in Emvoice.

Although you don’t necessarily need to be this involved when recreating vibrato, you can make your vocal playback much more expressive for certain notes in this way. If you just want to add a uniform vibrato across the whole of your piece, just copy and paste some that you’ve made from one note into the other; it’s really easy.

I’m going to quickly add vibrato to the rest of this phrase so you can hear how the whole musical line sounds. 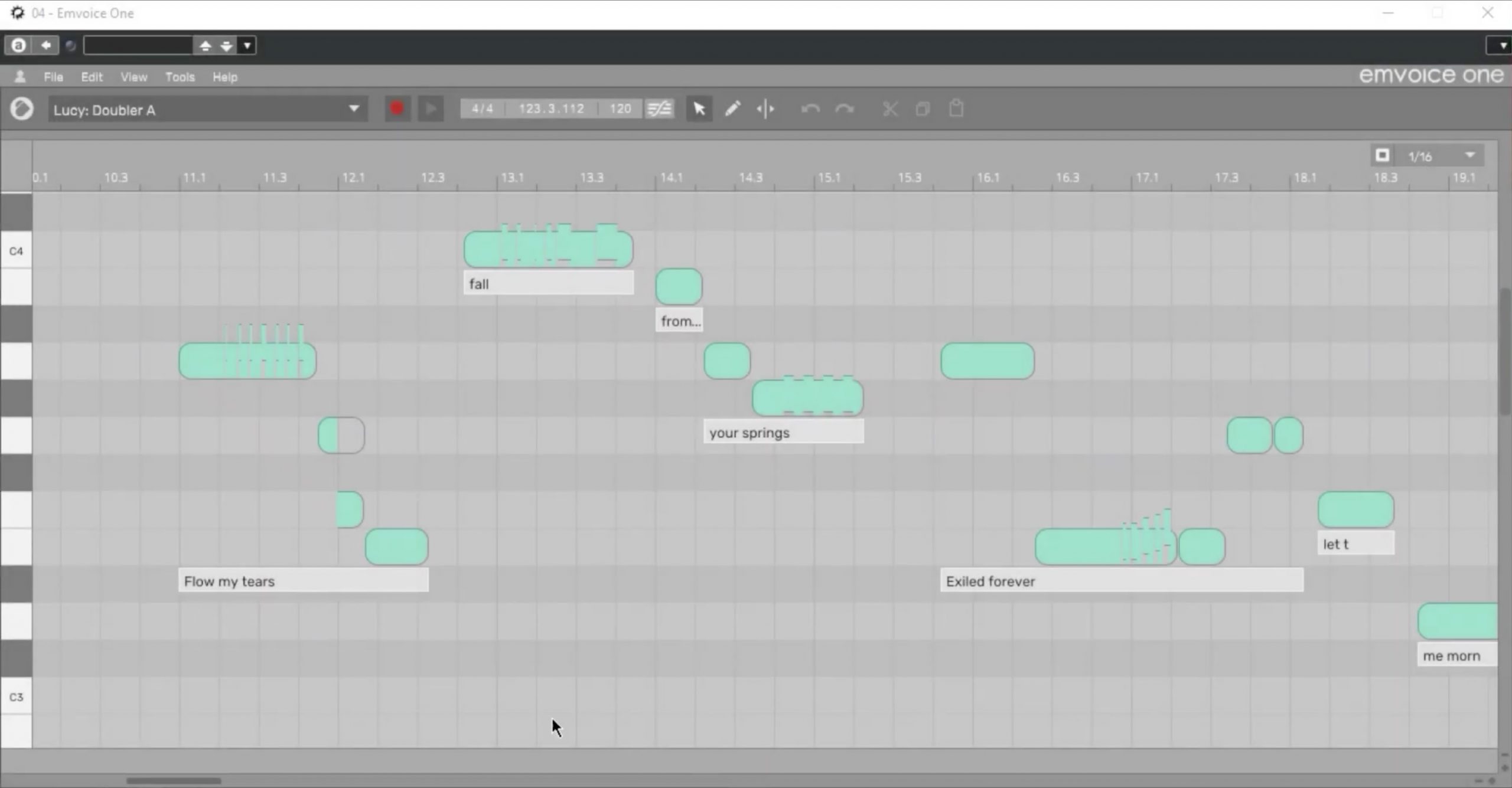 At present, it’s not possible to change the volume of each block of sound in Emvoice, which would give even more expressive potential to the playback. This has to be done in any DAW. In my case, inside Nuendo 12, by exporting the finished vocal from Dorico as a WAV file, importing it into the DAW and then adding volume automation to the track in post production.

Although you can adjust volume to MIDI notes in Dorico, to make this volume change happen in Emvoice, we would need to automate the mixer in Dorico, which currently in version 4 is not yet possible. It would, however, be a really useful and powerful feature for a future release.

I hope you’ve enjoyed watching this video and found it useful. Thanks again to Charlotte Potter for her invaluable help and beautiful singing. If you’ve enjoyed this tutorial, please click the “like” button underneath and do subscribe to my channel to watch any of the videos in this series as they appear.

I’ll leave you with a complete performance of the music with Charlotte singing, and then I’ll fade Emvoice in and out so that you can hear the difference between the two voices.

Ian Blick shows how to score a song using Emvoice One and Dorico, how to add vibrato using a plug-in...

Still using Dorico 3.0? We provide a helpful analysis for the smart shopper in light of Steinberg's "PSA" about the...