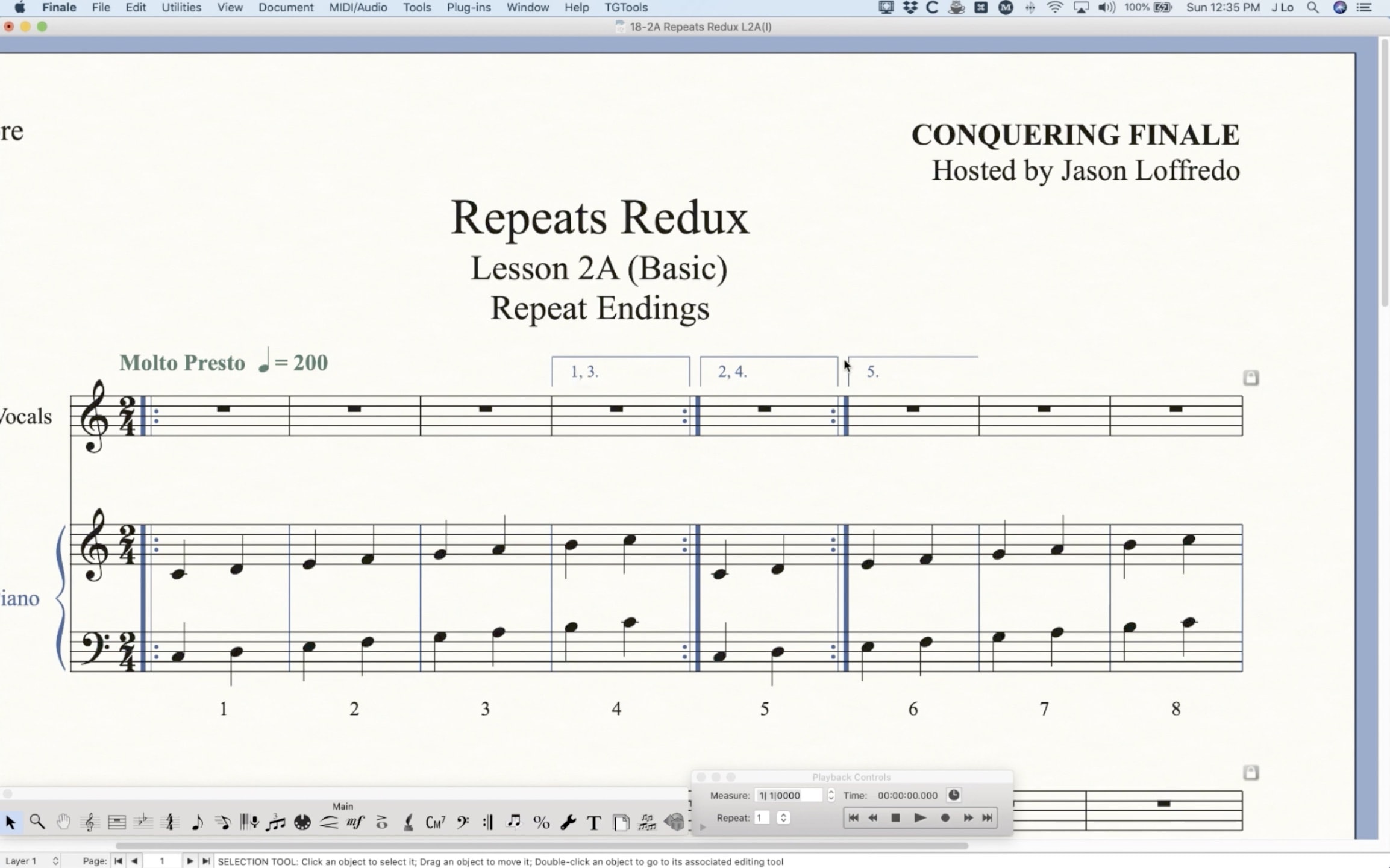 In this basic video for the Repeat Tool I’ll show you how to do the most common and simple things you’ll likely need to do with repeats in Finale. It really only takes about 4 minutes to explain those basics but the rest of the video is a good primer for what’s to come in the Repeats Redux series including understanding the basics of the Repeat Selection Dialogue Box (4:05) and the Backward Repeat Bar Assignment Dialogue Box (5:54).

In this “basic” video I attempt to explain exactly how repeat endings work in Finale. There’s a lot going on with endings as far as the graphical and playback parts are concerned but if you take a careful look at this video you should walk away with a much better understanding of how Finale handles endings. At (13:12) I’ll even show you how to create a set of complex endings consisting of a 1st and 3rd, a 2nd and 4th, and a 5th ending.

Making adjustments to the Ending Brackets is unfortunately not that straightforward. Because 1st endings consist of two overlapping Repeat Tool elements it’s important to understand which handle belongs to which element so that the appropriate adjustments can be made. If you’ve ever been frustrated trying to simply adjust the height of a first ending, this video will clear up all the confusion involved in that seemingly simple task.

Finale allows you a lot of flexibility when it comes to what staves on the score to show your Repeat Endings. However, knowing how this works is key! There are Staff attributes that can foil your plan so it’s important to understand the interplay between the Show On options and the Staff Attributes. Staff Lists for Repeat Endings is covered in depth here as well and at (10:49) I’ll show you how the Allow Individual Edits per Staff option will let you edit the brackets individually for staves up and down your score.

This video will explore all of the default options available for the design of ending brackets as well as the position and font of the numbers in the endings.

An unfortunate limitation of Finale’s Repeat Tool is that it will not connect the ending brackets in endings that span more than 2 bars! In this video I’ll show you a couple of workarounds for this; one that’s quick and maybe ok in some circumstances but not ideal, and a second that’s a little trickier but more useful in the long run.

In this introductory video to Text Repeats I will cover a lot of ground including how to add Text Repeats in several ways including metatools and the differences in positioning using those methods. I’ll also give you the ins and out of the Text Repeat Assignment Dialogue Box which is where you can assign the exact position as well as the action and the target for the Text Repeats. Finally, I’ll do a quick walk through of a simple D.S. al Coda as well as a D.C. al Fine to help illustrate how these actions and targets work together.

The Text Repeat Designer in Finale allows you to create and edit the Text Repeats that are available in the Text Repeat Assignment Dialogue Box. The designer is a little rudimentary but there are some important things we can do like set the font and the justification/(alignment). There’s also an insert that can be used to reference a different Text Repeat which I’ll explain. Text Repeats can use enclosures as well, but I skipped the enclosure designer in this video because it’s exactly the same as the one in the Expression Tool so if you’re interested in that please check out video 15-4B.

In this video I’ll show you all you need to know about positioning Text Repeats, as well as the “Show On” options (4:57) which will allow you to show the Text Repeat on multiple staves in your score including using the very flexible Staff Lists (7:12), and finally I’ll take a look at the Allow Individual Edits per Staff option (14:46).

This video will cover the rest of the Repeat Options from the Document Options that haven’t been addressed in the Repeat Endings or the Text Repeat videos. Most notably the options for adding wings to repeat barlines, back to back styles, all the settings for the repeat barlines themselves including line thicknesses and even the repeat dots.

Adding a Coda System to the beginning of a system is fairly straightforward but creating a mid system Coda involves a more complicated process. Fortunately, Finale provides a really nice plug-in that will handle everything automatically so this video will walk you through that plug-in but beyond that it will give you a look under the hood so you can understand a few important things that Finale does when it executes that plug-in that may have consequences for you down the road.

This is a walk-through of a rather complex repeat structure which will put a lot of the lessons throughout this series into practical use. There are simple and multiple repeats, simple and more complicated endings, a D.S. al Coda and a D.S.S. al Coda which has a “Take All Repeats” instruction, and finally a D.C. al Fine that requires some math in order figure out when to stop! At (22:33) I’ll also show you the handy Check Repeats utility and at (23:34) I’ll discuss the process of using Expressions to help create better looking Text Repeats with the Segno and Coda symbols in line with the text.