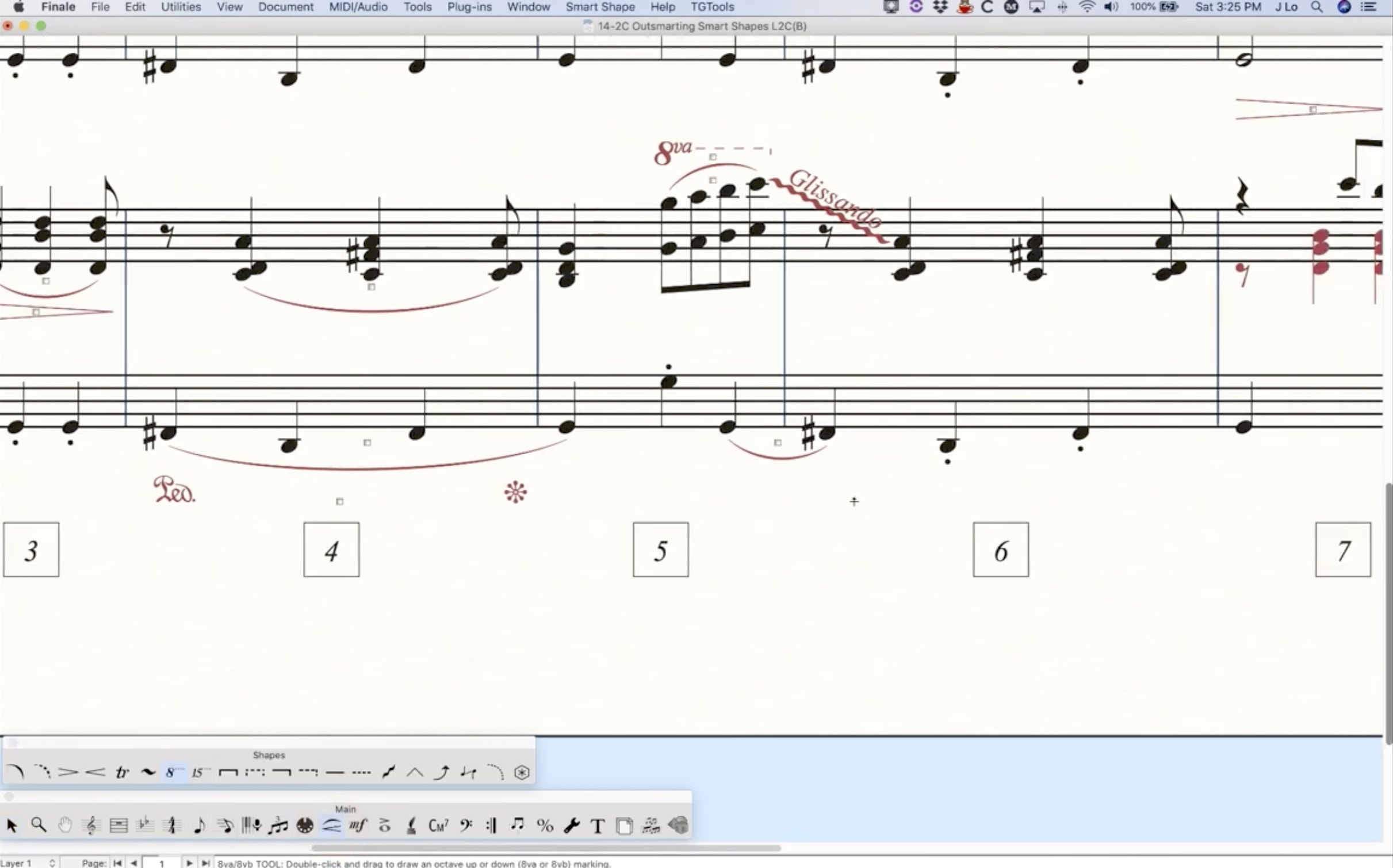 This introductory video for Smart Shapes will provide an overview of what elements can be found in the Smart Shape tool and how to simply add those elements to your score. Using metatools is also covered as well as some basic information about the three types of Smart Shapes: beat attached, note attached and notehead attached.

The slur, the dashed slur and the dashed curve all behave similarly in Finale. I’ll show you how to add them in various ways as well as how to manipulate them so that they will look good in your scores. Also covered will be slurs across systems, slurs between layers and I’ll even show you how to create an “S” shaped slur (7:15) between two staves of a piano part.

There are several options for drawing and adjusting hairpins in Finale. By default hairpins will remain horizontal but I will show you how to override that to create angled hairpins. Also aligning hairpins either vertically or horizontally is fairly easy once you know how to do it and it can be done right from the Smart Shape tool; no plug-ins necessary (7:19). And finally hairpins across system breaks have some unique options which will be discussed here as well.

Drawing a basic trill in Finale is fairly easy but you may not know that trills with a sharp, flat or natural sign is also available in Finale you just have to know where to look (1:57). Octave lines are also easy to manage in Finale but I’ll show you how to choose the 8vb or 15mb sign (versus 8va or 15ma) for your octave down lines (4:02). And there’s a slight difference between the bracket tools and the line tools in Smart Shapes, I’ll show you what those differences are.

The Glissando and the Tab Slide (used for trombone slides and other portamento type slides) behave pretty much the same way in Finale. This video will demonstrate how to work with these two elements. It’s possible to get the glissando line without the text if you know where to look and I’ll show you how to deal with slides (and glissandi) getting in the way of accidentals and other things.

The Bend Hat tool and the Guitar Bend tool are intimately related in Finale. In this video I’ll discuss how to work with both of them and show you how they interact with each other between a guitar notation staff and a guitar TAB staff. There are some other basic settings for the guitar bends that I will also cover in this video.

The Custom Line tool is a very powerful part of the Smart Shapes Tool. Learn how to use custom lines to your advantage in this video. All kinds of custom lines already exist out of the box in Finale including pedal lines, accel., rit., cresc., lines among many others. This video will show you how to find them, use them and then how to create your own custom lines using the Smart Line Designer which is not as scary as it sounds.

Slurs are fairly complex in Finale. In this first of two videos dedicated to slur settings I will talk about the options available for manipulating the default contours of slurs (0:35) and the default placement of the slur tips relative to noteheads, stems or beams (7:53).

This video is all about the Smart Slur Settings. Engraver Slurs, which control how and when slurs avoid certain elements, is explained as well as the settings for system breaks and slur thicknesses among other things. Of note, there’s a great tip on how to get a hand-drawn look to your slurs at (16:12).

Hairpins, Trills, Octave Lines, Brackets, Lines, and all Custom Lines are all considered “Beat Attached” lines and share some similar properties. This video will explore the similarities between all these elements as well as the unique settings for some of them like Hairpins (0:23), Trills (4:49) and Octave Lines (10:12). I’ll also show you how to create Trills with continuations that have the “tr” in parentheses at the system break (7:26), and I’ll show you how to create a 22ma marking (12:00).

There are placement options available for the start and end points of the Glissando and Tab Slide lines, this video will detail how to customize those. In addition there are a few things you can do to customize the design of these lines as well. At (13:45) I’ll show you how to create a Tab Slide line with a “Portamento” text on top of it.

There are only a few things that can be done with the Bend Hat tool but mostly it shares attributes with other Smart Shapes elements. There are more options available for Guitar Bends including placement, line settings, text settings and even settings for the arrow at the end of the bend. All of this is covered in this advanced Smart Shapes lesson.

It is possible to export Custom Lines Libraries from one file and import them to another file but there are a few tricks to this and I will provide some good tips for doing that in this video. There are similar tricks when copying material that contains Custom Lines between files. In addition, I’ll explain exactly what can and can’t be transferred between files.

The new Finale Maestro SMuFL font includes a new Multi-Segment Lines category of glyphs that are really useful for creating a variety of useful custom Smart Lines. I will walk you through what’s now available and demonstrate a few nifty ideas for how to use them, including an accelerating trill (8:58).

Version 27 changes the character used for the 8va and 15ma marking used below the staff. This creates an alignment issue with how the dashed line looks following those characters. Unfortunately, there are no settings to address those alignment issues, so in this video, I’ll look at some alternate glyphs that work a little better with the default octave lines in the Smart Shape palette. I’ll also show you how to create a custom line using the new 22ma and 22mb characters that now exist in the SMuFL fonts (5:26). In addition, I’ll discuss some playback problems with the SMuFL fonts for accidental trills, glissando, and pedal markings, (10:50), and show you some temporary workarounds until they can update Human Playback to play nicely with the SMuFL fonts.

The importance of the Staff Tool in Finale cannot be underestimated. This very large series of videos will be well...

Finale enters the world of 64-bit computing today with a new release focused on streamlining and modernizing the codebase. New...