This blog post is written by Bob Zawalich, composer, guitarist, software designer, and creator of hundreds of useful plug-ins for Sibelius. In this post, Bob shows us how to notate lever changes for lever harps in Sibelius.

Non-pedal harps often have levers attached at the top of each string to allow additional notes to be played. Engaging the lever will raise the pitch of that string by a semitone.  For example, if the strings of such a harp are tuned in C major, engaging the F and C levers will allow the harp to be played in the key of D major without retuning.

Sometimes the harper will need to play notes that are not in the key (accidentals), and when that happens, a lever can be raised or lowered to make the desired pitch available. The player will usually need to reset the lever when that pitch is no longer needed.

Watching a good lever harp player change levers can be as interesting as watching the feet of a pedal harpist.

Lever changes are often written into harp scores to indicate a good time to change the lever before the accidental is played, and a good time to reset the lever. A player will try to change levers when the hand that changes levers is not busy.

Lever changes can be notated several different ways. One is to write the name of the changed note with the desired accidental between the staves at the location where you want to change the lever, before the changed note is played. Unlike pedal harps, where a pedal changes all the octaves of a note name, a lever changes a single string, and so the octave must be indicated as well. There are various ways to indicate the octave as part of the text, so you might see mid F#  or Bb III used in some scores.

Sylvia Woods has a good explanation of notating lever changes.

The text methods are easy to implement in Sibelius, using Technique text between the staves, and finding the accidental characters in the contextual menu.

I am going to demonstrate how to notate lever changes by putting a stemless silent white diamond notehead with an accidental in the staff at the desired pitch and location. This provides the player with the pitch, the changed accidental, and the timing for the lever change. The player will not play this note, but will change the appropriate lever when the notehead is seen. In Sibelius we will not want this marker note to play back.

Suppose we want to mark the F# above middle C:

and that we start with this music:

We will have to trick Sibelius into letting us do this, and I have come up with 3 ways to accomplish this. Each has advantages and disadvantages, and none is completely satisfying, but they will produce the desired result.

Sibelius provides us symbols for the diamond notehead and for the various accidentals. It will be easy to add these to the score, but Sibelius will not make room for them in the music so you will need to position them yourself.

We want to create 2 symbols, a diamond notehead and a sharp accidental. In Sibelius 6 and earlier we create symbols in Create > Symbols; in Sibelius 7 and later use Notations > Symbols > More Options. The default shortcut is Z.

From the Accidentals row, create the “sharp” symbol, and from the Noteheads row add a “diamond note”.  Sibelius will position these symbols above the staff.

Before we do anything else, select each symbol, right-click (ctrl-click for Mac) and turn off Magnetic Layout for the symbols, so they will stay in position when you drag them. 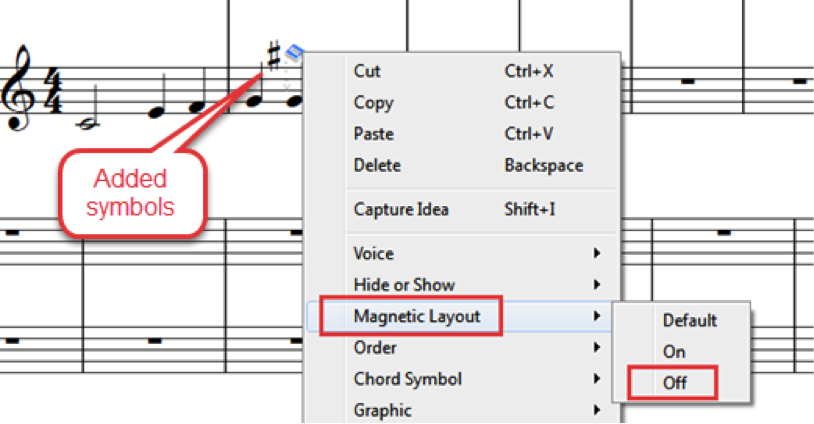 Now we can drag the symbols into place, but there is no space for them in the bar:

To make room, click on the second G note and drag it to the right, which will open up space. For more precise control, you can select the note you want to move and type Shift+Alt+<left or right arrow>, which will shift the selected note.

When you have the right amount of space, move the sharp and the notehead into place. We can use the existing F# note to see where to put the accidental vertically, and we position the diamond notehead in the “F” space. Zooming in makes this easier. Use the mouse or the arrow keys to position the symbols. You will need to position them by eye, but it should be close enough.

Since these are 2 separate symbol objects they will have to be positioned separately.

The spacing you just created will be lost if you use Reset Note Spacing, and it will be lost if you copy these notes to another bar, so make these kinds of notations late in the process, after most notes are in place, and check them before you print or after reformatting.

If you use such symbols often, you can construct user-defined composite symbols that include both the accidentals and the notehead in a single symbol; this would require less careful positioning since you could position the two characters as a single object.

When it is time to reset the lever, you can repeat the process with a natural sign and another diamond notehead. You can copy and paste the one you just inserted.

If I only need to show a few lever changes, this is how I mark them. If I were writing an entire book, though, with lots of changes, I might consider using a different method.

There is another way to accomplish this that is requires more setup and is conceptually harder, but which avoids the respacing problems, and is easier in some ways. In this procedure we first need to create a special notehead that is diamond shaped, stemless, and silent. This is actually easy to do.

In Sibelius 6 and earlier we create notehead styles in House Styles > Edit Noteheads; in Sibelius 7 and later use Notations > Noteheads > Edit Noteheads. When the Edit Noteheads dialog comes up, select notehead 2, the Diamond notehead, and click on New. Choose a new name (I picked Diamond Stemless Silent) and uncheck Plays and Stem. The new style is silent and stemless. This style will be defined only in the current score. 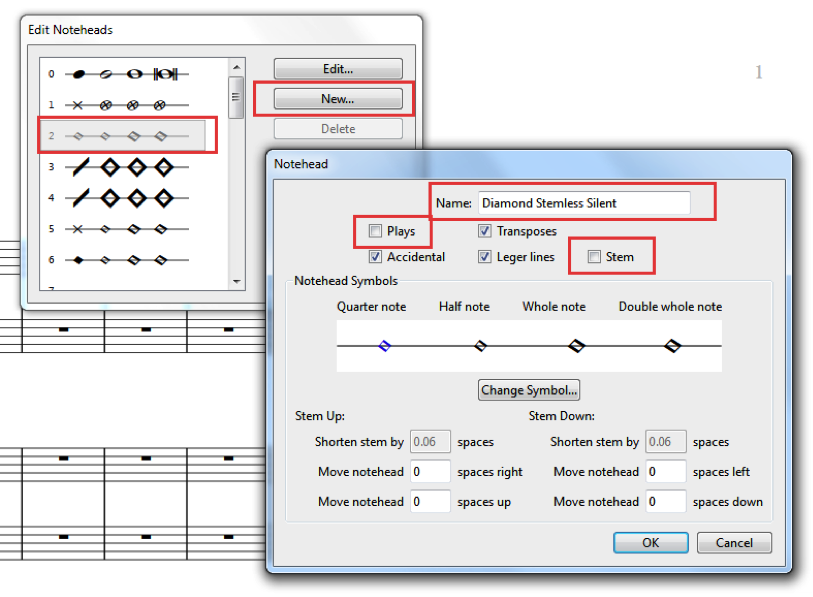 Now, starting with the same music, choose an unused voice. If there is only one voice, pair Voice 3 with Voice 1, or Voice 4 with Voice 2. My example is in Voice 1 so I will choose Voice 3.

Click an appropriate duration in the keypad (a quarter note would work for this example), choose an accidental, then click the voice at the bottom of the keypad and type N to enter note input. The mouse cursor should now be a blue arrow. Click in the note position (an F# in beat 2 in this case), and you will see something like this, with a Voice 3 note and some added rests: 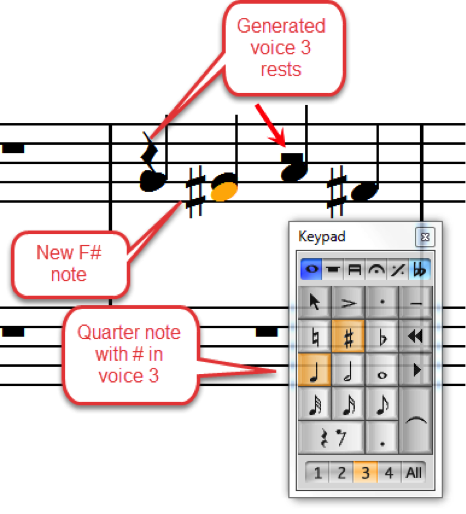 So take a deep breath. We are actually in pretty good shape. Select the new F# note, and in the Properties window / Inspector, change the notehead style to our new Diamond Stemless Silent style at the bottom of the list. Then select each of the generated Voice 3 rests (they are yellow when selected) and hide them (Ctrl+Shift-H / Command-Shift-H). It will now look like this, and the biggest remaining problem is that the F# is on top of the Voice 1 note.

Now, with the new note selected, bring up the Properties window / Inspector, and in the General Pane, reduce the X value to move the note to the left until there is some space between the end of it and the start of the G in beat 2. Then use Reset Note Spacing, and it should look like this:

It is what we want. The diamond note is only yellow when selected. It will print black.

This will not change if you reset the note spacing or copy the bar elsewhere. In fact, what is really cool is that you can copy this note to other positions in the score and it will retain its X offset. This means that resetting the lever will be easy.

If you change the note’s pitch while copying it, you may need to reset its accidental, but otherwise you can paste this note to any bar with notes in Voice 1, in any score (!), and while you will need to hide the Voice 3 rests, and reset note spacing, that is all you will need to do. The note will be nicely spaced and will be stable as well.

My colleague Jeremy Hughes suggested this one. If you have defined the stemless silent diamond notehead I discuss above, then you can create a grace note at the desired location, change the notehead, and reset note spacing. There is no need to pick another voice. You do not need to shift the note offset.

The disadvantage of this is that the grace note size is 60% of a regular note. If you don’t mind a smaller notehead, this is really quite easy once the notehead style is defined. Most printed examples I have seen use full sized noteheads, though, so this is probably not the best implementation.

If you will never have actual grace notes in your score, you could increase the grace note size in Appearance > Engraving Rules > Notes and Tremolos to 100%, but I would be careful with that because it will affect all grace notes in the score. It is also possible to enlarge the notehead symbol used, to compensate for the small size of the grace note, but the accidental will still be grace note sized.  So while this method has many attractive features, it is probably not the way I would notate lever changes.

This technique might be more useful in other situations, though, so it might be something worth keeping in your toolkit.

As I said at the start, each method has advantages and disadvantages. You can choose to create lever changes the way you like best.

In Sibelius, harp notation text objects are created in a variety of text styles and often contain a mixture of...