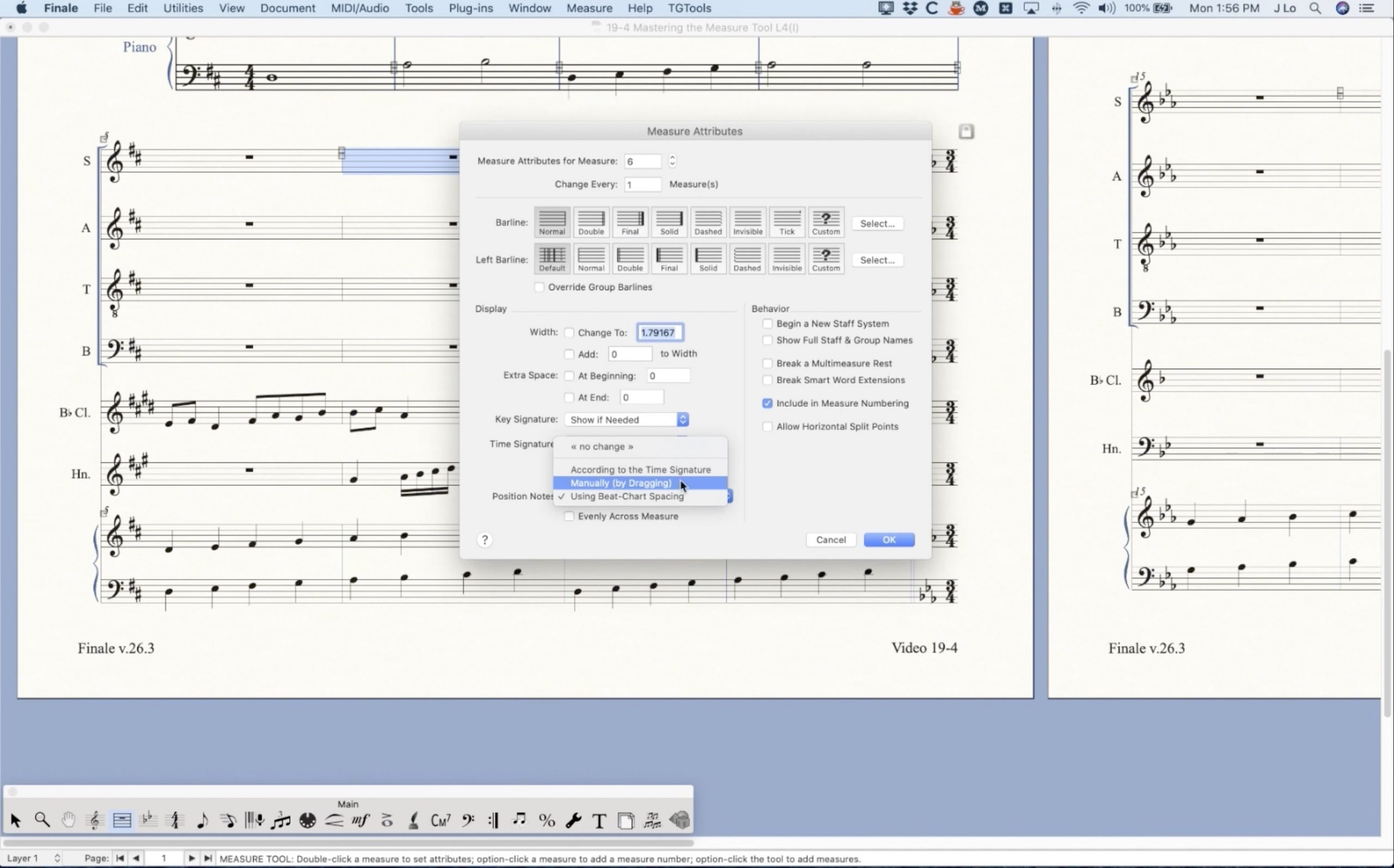 This video is an important introduction to Finale’s Measure Tool which encompasses a lot of somewhat disparate functions. I’ll give you a brief overview of what can be done using the Measure Tool without getting into too much detail. There are some important concepts presented in this video including the idea behind frames and what Finale actually considers a “Measure”. In addition I’ll introduce the Measure Attributes window which will be the main location for manipulating elements within each measure and I’ll show you how that window can behave like a mass change utility as well.

Changing barlines in Finale is rather simple and this video will explore how to do that, but it will also go more in depth to discuss what kind of barlines you can use, including custom barlines, how they sometimes affect other properties from the Measure Attributes window and what the difference is between a Barline and a Left Barline in Finale. I’ll also show you how to hide barlines globally per staff or only for a few bars using Staff Attributes or Staff Styles.

Group Barlines have some unique properties which can be found in the Group Attributes. You can choose to draw barlines only on staves, through staves, or only between staves. In addition it’s possible for Groups to have their own alternate barline style and there are some implications for this related to barlines in the Measure Attributes.

There are a few global options available in the Document Options for All Barlines and Left Barlines so this video will cover those settings. In addition, Finale provides global settings for the thicknesses and spacing of the barlines.

Barlines in Finale are somewhat universal, vertically speaking, so in order to get a different barline style in certain staves you have to hide the barlines in the Staff Attributes and manually enter the unique barlines using expressions. In this video I’ll explain exactly how tho do that. In addition I will show you how to get staggered barlines for independent time signatures using a similar technique with Expressions. The process is not perfect but with the techniques I demonstrate it should be as close to perfect as possible.

The majority of this video is spent discussing the width options for measures. I took some time to get into the weeds explaining how Finale calculates the widths for each measure which I believe helps inform decisions about how to change the relative widths of individual or groups of measures by either using the Measure Attributes Window or by using the measure width handles – there is a difference. The rest of the Display Options are also covered. At (10:01) is the Extra Space options and at (11:02) is all of the Key Signature, Time Signature and Cautionary options.

The Measure Tool is where we can adjust the horizontal position of rhythms from the top to the bottom of the score. This is different than using the Note Position Tool which will only move the note horizontally in a single staff. There are of course some tricks to this which I will show you as well as a few neat tips. At (10:18) I’ll discuss the “Evenly Across Measures” option which will allow you to do things like putting too many or too few notes in a measure and having them space evenly within the measure. This could be one way to do cadenza bars… if you don’t mind that Finale will never playback these measures correctly.

There are only 5 options from the Measure Attributes window covered in this video but the implications of these options are far-ranging so it’s critical to understand what they are and how they work… and frankly, that they’re even there in the first place! You’ll learn everything you need to know about “Begin a New Staff System”, “Show Full Staff & Group Names”, “Break a Multimeasure Rest”, “Break Smart Word Extensions”, and “Include in Measure Numbering”.

Finale provides two different ways to split measures across systems. The first method involves the “Allow Horizontal Split Points” option in the Measure Attributes. Using this method comes with some odd behaviors which you should know about. The other way is to use the “Split Measure…” plug-in (4:06) which will have certain advantages over the Horizontal Split Points method but also comes with its own set of quirks. Once you know the pros and cons of both methods you’ll be able to decide which method might be best for your specific circumstances.

Step by step directions for how to create cautionary Clefs, Key or Time Signatures in the last bar of a file, or “Hanging Courtesies” as I like to call them. This may be useful for Musical Theater or Opera composers and arrangers where the Attacca instruction is used quite often and songs or movements end up in separate files.

You can do just about anything with time signatures in Finale, if you know how to tame the beast. In...

Learn how to use Finale's Clef Tool and harness all of its power, including mid-measure clef changes, positioning, spacing, customizable...