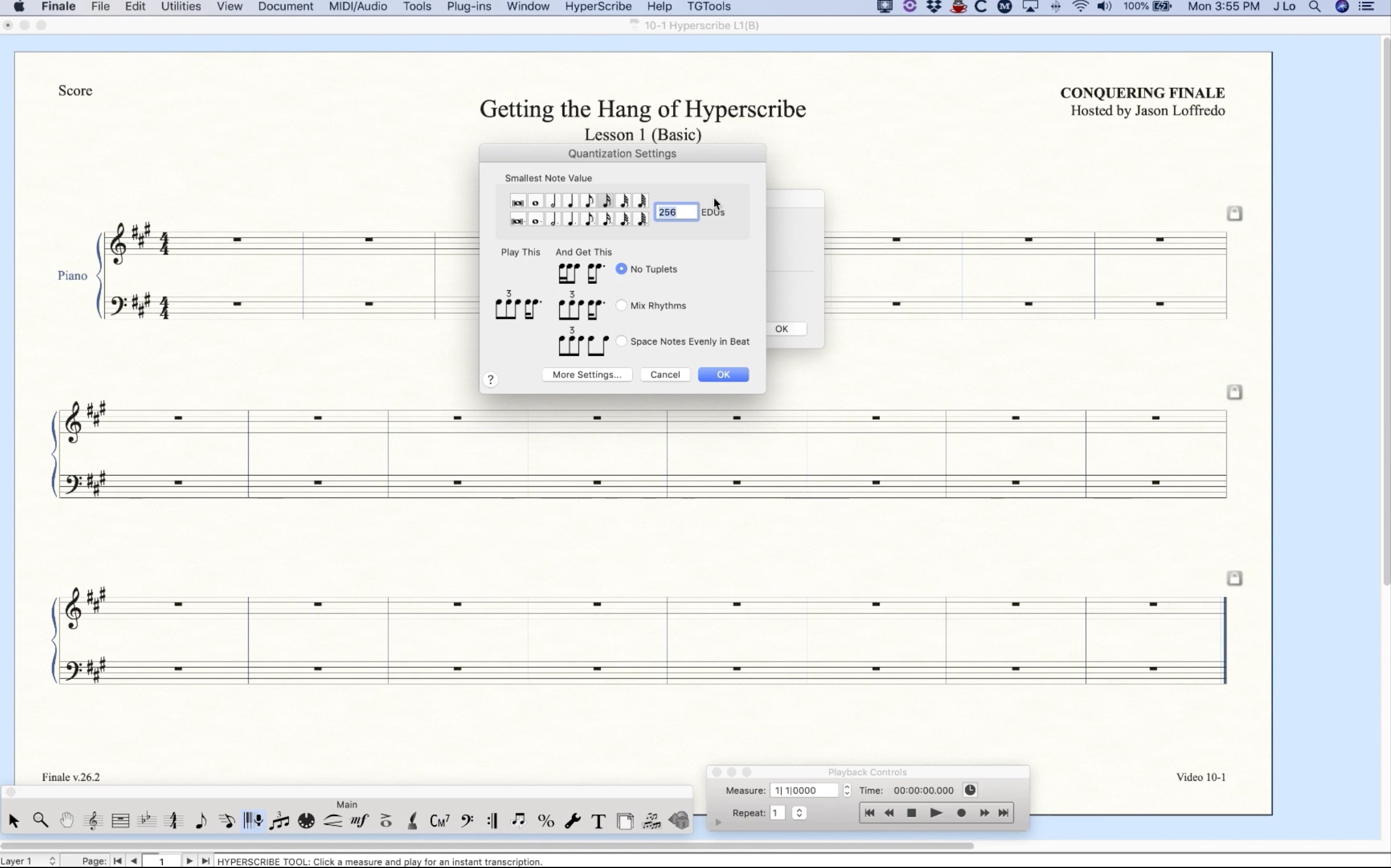 Before we get into the details of note entry, I will offer advice and wax philosophical about the three different ways to enter notes and rests in Finale: Simple Entry, Speedy Entry and Hyperscribe.

To help with Simple and Speedy Entry please download the Finale Quick Reference Card for Mac or Windows which will provide a full list of keystrokes for those tools.

Getting the hang of HyperScribe

More than half the battle with HyperScribe is getting the setup correct. With the tempo, click and quantization set the way you need them to be you will have a fighting chance of getting some fairly decent results from HyperScribe. This video will show you how to get the setup correct and give you a few pointers for getting the most accurate transcription possible out of HyperScribe.

This video will demonstrate how to record in different layers or voices in HyperScribe (2:54) as well as recording in compound and odd meters (7:03). In addition there’s a close look at the other two Record Modes in HyperScribe: Split Into Two Staves (9:32) and Multitrack Record (17:59).

Did you know that you can record audio in Finale? Well… you can record ONE audio track and there are not a lot of options available for it but this video will show you all you need to know about recording audio in Finale! There’s a nifty tip at the end about using a HyperScribe audio recording to export a Finale generated click track (10:31).

Since HyperScribe records a layer of raw MIDI data underneath the transcription it’s possible to use HyperScribe to record a hidden “live” performance for instruments that just have slashes. In this video I’ll show you all the tricks and pitfalls associated with recording this type of realistic invisible playback data.

For the advanced users this video will discuss some of the alternate Beat Source options available in HyperScribe. There are options for starting the recording with MIDI triggers (2:03) and changing the metronome sound (6:35) from the Playback and/or Click… menu. The source for the tempo can also come from outside Finale (9:18) or you have the option to tap the click yourself as you’re recording (10:29).

This video will look at the rest of the HyperScribe Options including options to further refine the quantization settings for things like grace notes, rests and syncopations.

Time to get even speedier with this series of videos on Finale's Speedy Entry tool. Everything from notes, rests, ties,...