The venerable Edit Instrument Names plug-in for Sibelius is one of the most helpful Sibelius tools. It greatly simplifies the task of editing the instrument names that Sibelius applies by default, saving the user the tedium of double-clicking on every instrument name to edit it. We first discussed this plug-in on the blog more than a decade ago, and a bit more recently went deeper into the various ways of working with instrument names in Sibelius.

Now, Edit Instrument Names has been updated to handle various formatting conventions. For Sibelius 6 or later, the main dialog now retains formatting information for all instrument names, which was not previously available. There is also a new Format Names button that will take you to a dialog where you can apply preset formatting patterns to names. You can edit or add new formatting presets, and in Sibelius 7.1.3 or later you can multiselect instruments and apply formatting to all selected instruments at once.

Instrument names are commonly plain text, such as “Flute”. If you want something like a real accidental for “Trumpet in Bb”, where the “b” appears as a proper flat, though, you need to apply formatting. You might also want to make text bold or italic or to appear on multiple lines.

The most straightforward way to do that is to double-click on an instrument name at the left edge of a staff, and type Return to split a line, or make a selection and type Cmd-I (Mac) or Ctrl+I (Windows) to make it italic. You can right-click to get special characters such as accidentals.

That is fine for one or two names, but if you need to change 40 in an orchestral score that gets tedious.

Prior to version 02.21.00, the dialog in Edit Instrument Names could not show text that had been formatted previously. With the latest update, in Sibelius 6 or later, any text formatting will be retained and shown in the dialog. 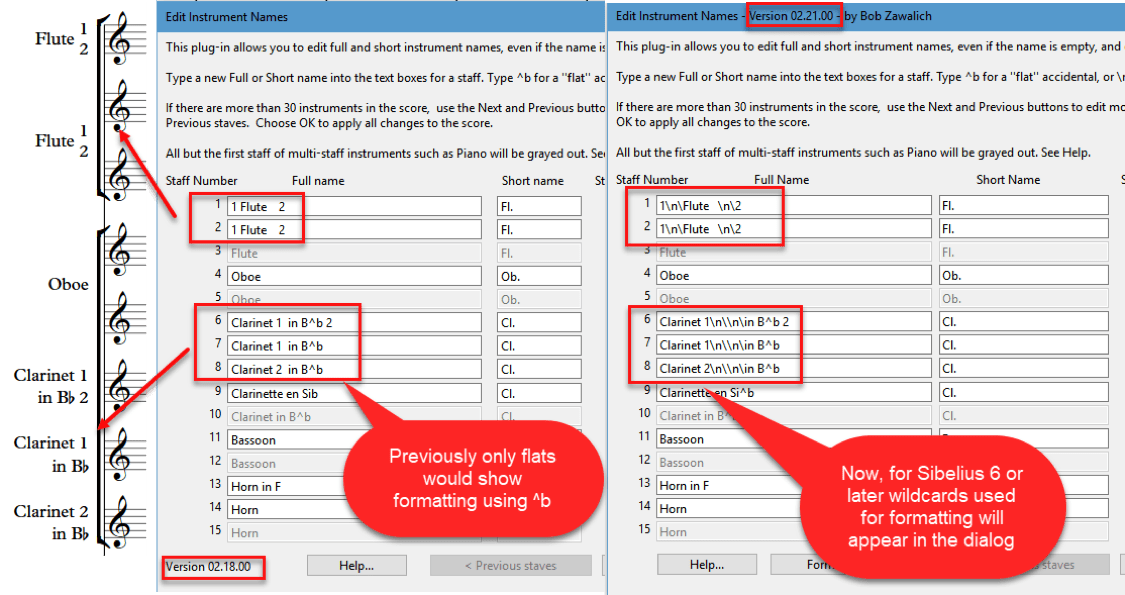 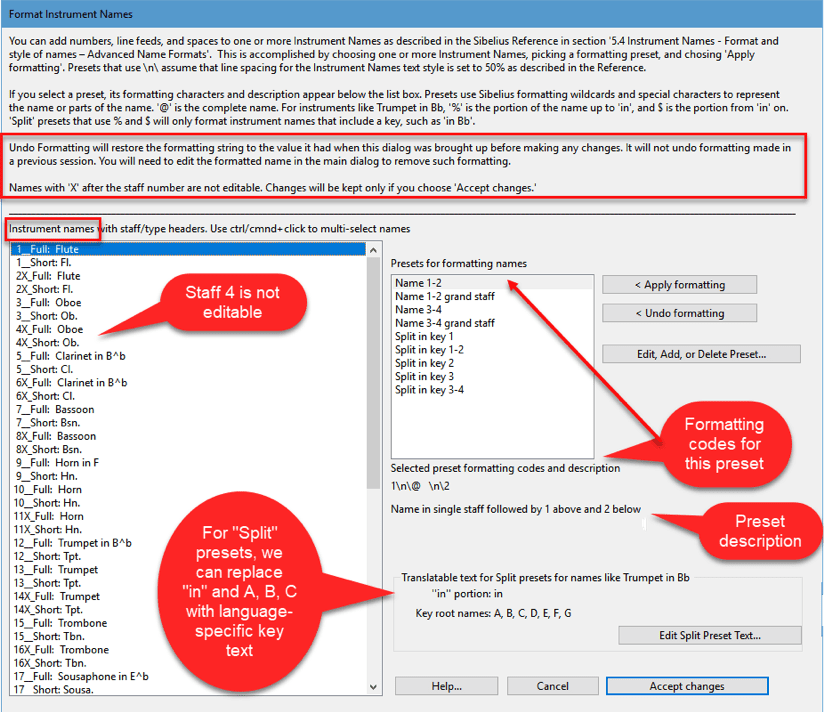 In Sibelius 7 and later you can Cmd/Ctrl-click entries in the list box to multi-select entries and format several names at once.

If you select a preset from the Presets list box, its formatting characters and description appear below the list box. Presets use Sibelius formatting wildcards and special characters to represent the name or parts of the name. @ is the complete name. For instruments like “Trumpet in Bb”, % is the portion of the name up to “in”, and $ is the portion from “in” on. “Split” presets that use % and $ will only format instrument names that include a key name, such as “Trumpet in Bb”, and ignores other instrument names. The marker text, which in English is ” in ” and the letters A-G, can be edited to handle non-English names.

If you apply the preset Name 1-2, whose formatting codes are 1\n\@ \n\2 to the instrument name Flute, the result will be as shown below in the dialog, and then in the score. Unfortunately, there is no good way to preview the results in the score until you close the plug-in. Use Undo immediately if the result is not what you expected.

Undo Formatting will restore the formatting string to the value it had when this dialog was brought up before making any changes. It will not undo formatting made a previous session. You will need to edit the formatted name in the main dialog to remove such formatting.

The preset Name 1-2 implements this style:

For this formatting to be effective, the text style used for Instrument names needs to be modified as described in the Sibelius Reference to have a Line spacing of 50% rather than the default 90%. The built-in presets all assume a line spacing of 50% for proper spacing. See this post for more information.

While names such as “Clarinet in Bb” can be processed as a single block, this dialog can also split names that contain “ in ” followed by a key name (a capital letter A though G) into two parts: the part before “ in ” and the part from “ in ” to the end. Formatting will then be applied only to the second piece of the name. For example, we might have:

The built-in presets that start with “Split” use the special formatting characters % and $ to split the name into “Clarinet ” and “in <keyname>”, add formatting around the two parts of the name.

Here are some instrument name formats that music engraver Bill Holab sent to me to use as examples. We can produce these with various combinations of parameters. 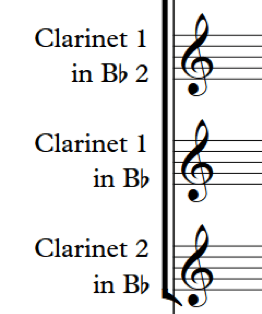 Bill described the examples above as

The marker text, which in English is ” in ” and the letters A- G, can be edited to handle non-English names using Edit Split Preset Text.

If you want to use formatting that is different from the available presets, you can edit or create your own presets using the Edit, Add, or Delete Preset button, which brings up another dialog.

The documentation in the dialog should contain enough information to let you edit, rename, add, or delete a preset. You will need to understand what the formatting codes do to use this effectively. It can often be helpful to start with a similar preset and make changes to the formatting codes from there.

Edited presets are stored between Sibelius sessions in the plug-in Preferences database, which can be viewed and edited using the shipping Preferences plug-in. There is no way currently to transfer changed presets to another machine, but Trace all presets will at least write them to the trace window, and you can copy the text to a text editor and print them out for entry in the Edit Preset dialog.

You can download and install the Edit Instrument Names plug-in in Sibelius in File > Plug-ins > Install Plug-ins. It’s found in the Text category.

If instrument names don't appear correctly in the score, how will anyone know what to play? Learn how to get...