A group of notes with feathered, or fanned beams “indicates free accelerando or rallentando within the duration” of the group, according to Elaine Gould in her music notation reference Behind Bars (which, in case you missed our last post, is now available in digital format). The convergence of the beams indicates the slowest point of the group; the fully-feathered beams indicate the fastest point:

The notes may be spaced evenly:

Or — my preference — the notes may be spaced according to their speed:

Since this feature was introduced in Sibelius 6, it’s been quite straightforward to create groups like those in the former example, so we’ll start there. 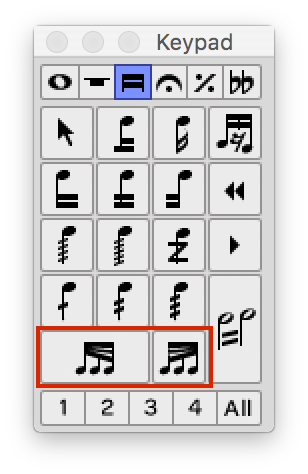 It’s important that all of the notes of the beam are the same duration for Sibelius to display a feathered beam. You’re not obligated to cram eight 32nd notes into the space of one quarter note if the music doesn’t demand it; you can create the notes as tuplets in your desired ratio (Note Input > Triplets > Other). Join the beams by selecting the appropriate notes and click the Middle of beam option in the third Keypad layout.

Then hide the tuplets by selecting them and hiding them — either by going to Home > Hide or Show or opening the Home > Inspector and under Tuplet: choosing None for the ratio and No bracket for the bracket style.

Spacing according to speed

We can use this approach to create feathered beams that are spaced according to speed, as in the second Gould example. Create tuplets in progressively increasing or decreasing ratios, depending on whether you’re creating an accelerando or rallentando:

Now, make the feathered beam by clicking the appropriate icon in the Keypad:

And then hide the tuplets. Here’s the result, with a comparison against straight eighth notes for reference: 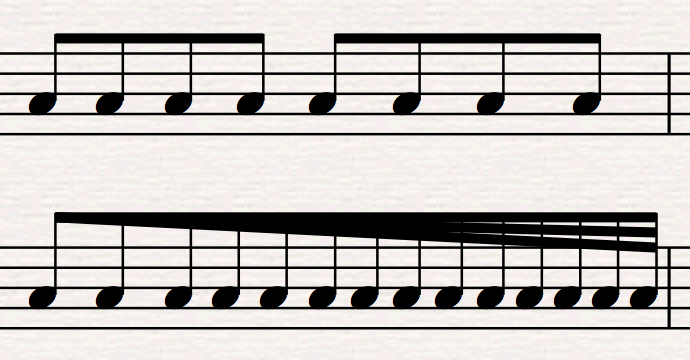 Here’s a more real-world example, from the first oboe part to Jessie Montgomery’s Records From a Vanishing City:

Naturally, the playback and display of notes in the feathered beams will be an approximation compared to how a live player would perform them; otherwise, you’d actually write strict tuplets! But by following this method and spacing the notes according to their speed, you’ll have a more realistic representation of these types of passages, especially in context with other instruments playing measured notes.

This blog post is written by Alexander Plötz, a music engraver, editor, proof reader and more based in Dresden, Germany....

Continuing my occasional series of looking at the things people are saying about Sibelius 6, today I came across a...