Dorico is now at version 2.2. While that may seem like a low version number, it is an extremely sophisticated scorewriter. Dorico introduces the user to different ways of thinking in dealing with the task of composing, arranging, and engraving using a computer.

That lower version number does, however, mean that there are features still in development. Dorico adopters have now (happily) realized that new features in Dorico are not merely tagged on: they are thought out from the ground up and are beautifully efficient — but this means that certain items which require complex solutions cannot yet be tackled with a dedicated tool, at least at this stage of Dorico’s development.

Since one of my many hats is as artistic director of a period instrument baroque orchestra, I often have to produce edited material which is suitable for performance. Although I do not specialize in Renaissance and earlier music, I know many who do, and some of the required features to publish such music are not yet implemented in Dorico.

Still, as we witness Dorico progressing apace, users have noticed regular additions to a series of tools called editors. These editors (notehead sets, musical symbols, playing techniques, key signatures/accidentals) in combination with the ease which one can create local note spacing changes, have allowed users to easily customize areas of notation for the specific needs of specific types of scores.

For instance, in terms of early music, witness these examples I have created with Dorico, such as this excerpt from Janequin’s “La guerre” with an “Attaingnant” look (noteheads and symbols editors; note spacing layout options);

This example of “white notation” from Couperin (notehead sets editor); 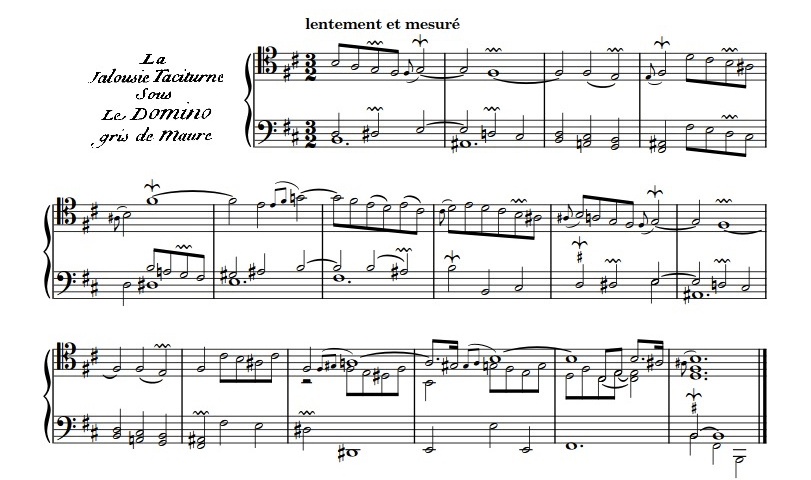 All of these tools can allow users to go a long way with a little elbow grease, and — as you will see — the generosity of an advanced user who created a custom font.

In this article, we explore the notation of a Handel secular cantata, which is an easy task; but also an “ars subtilior” virelai, which is considerably more complicated. In both instances, Dorico is up to the task.

The piece is divided in four sections: a scene which changes rapidly from recitative to arioso and to recit once again; an aria; a simple recitative; and a final aria. I can then create four flows and remove the oboe from the two recit movements since those are long enough to safely make them tacet. The bassi is then a cello with its label changed. 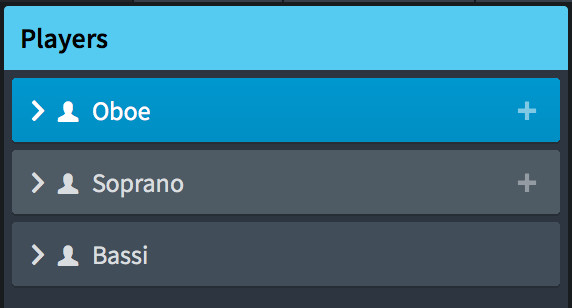 After note and lyric entry, we have now this: 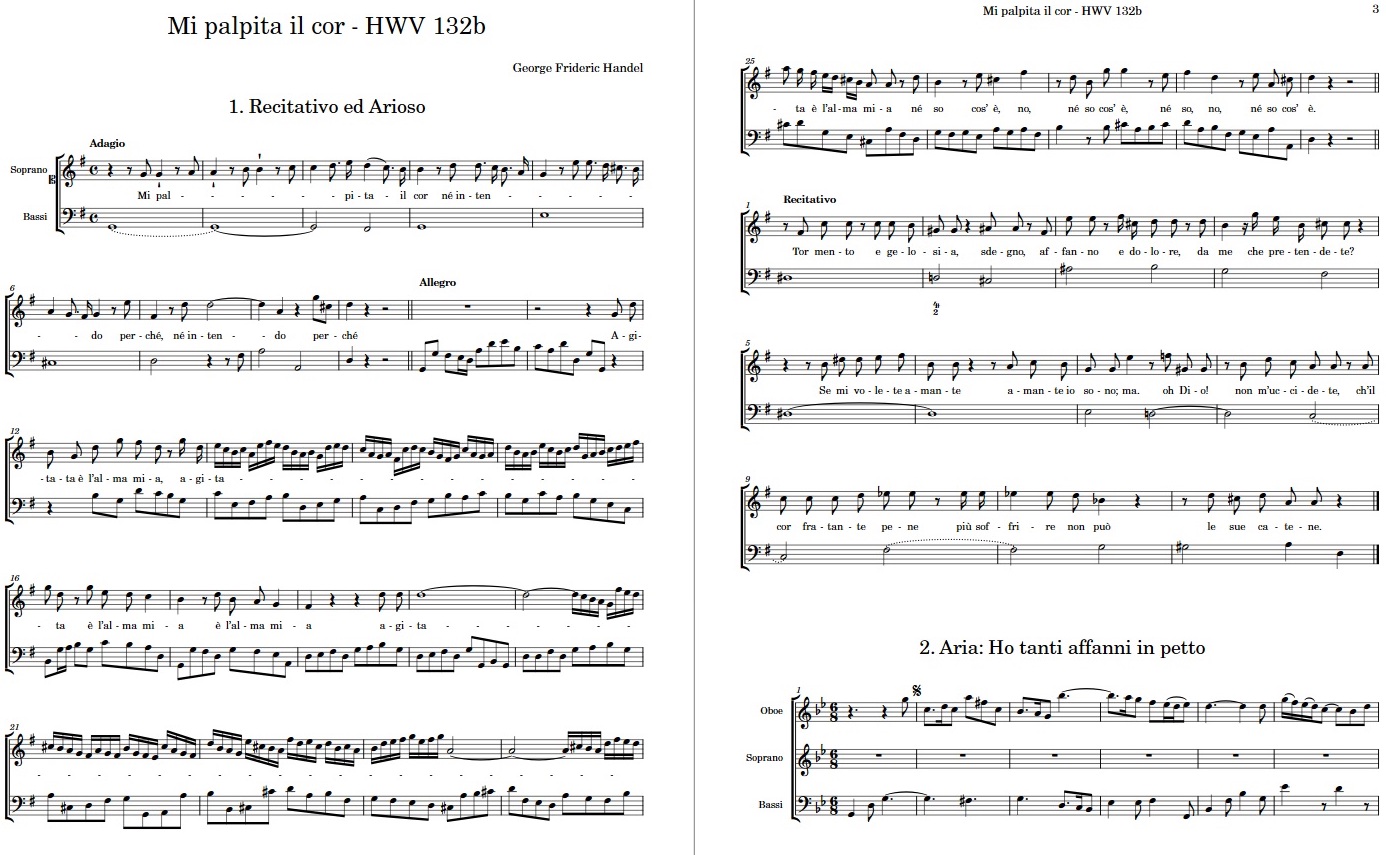 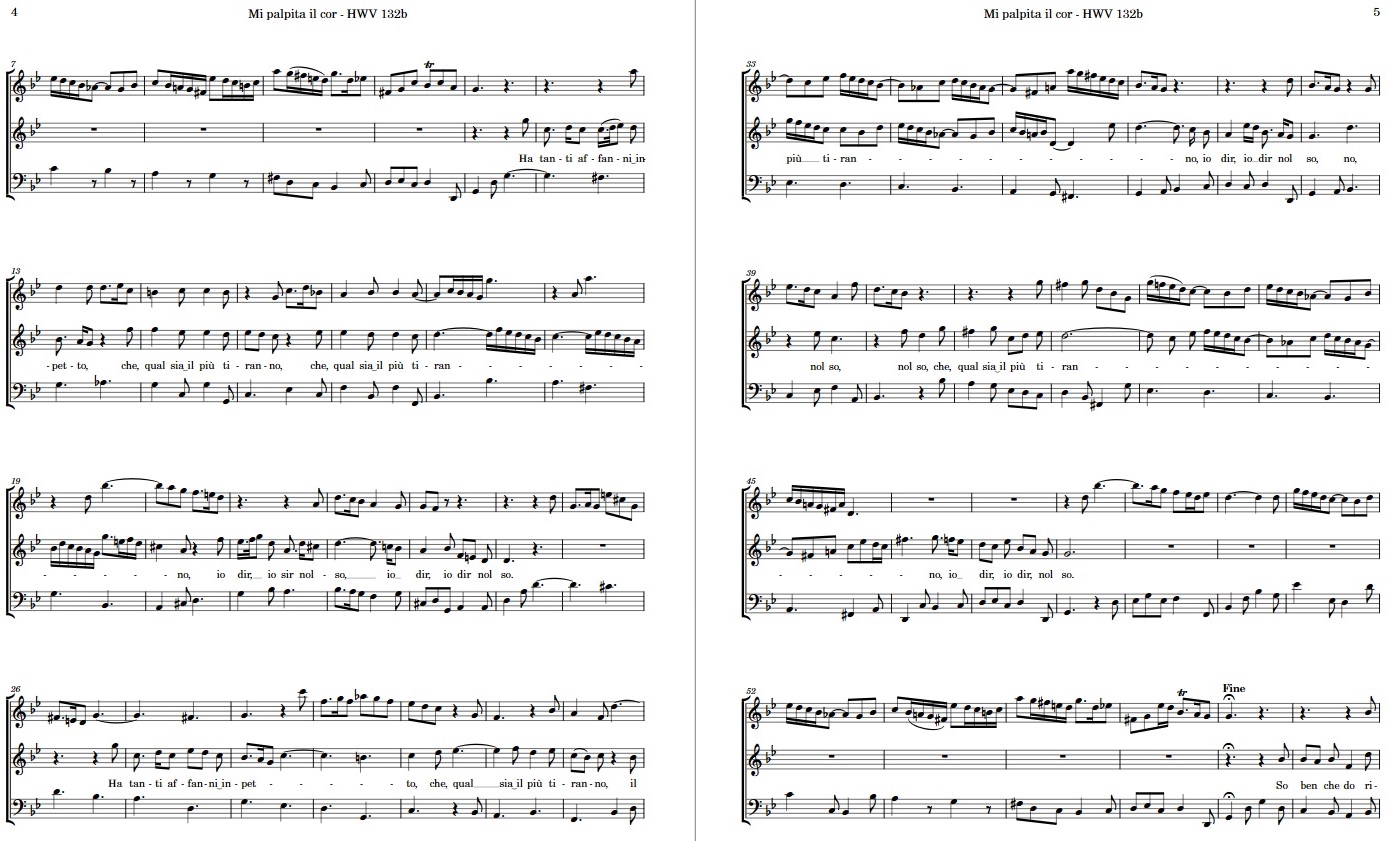 Here are some comments on note entry. 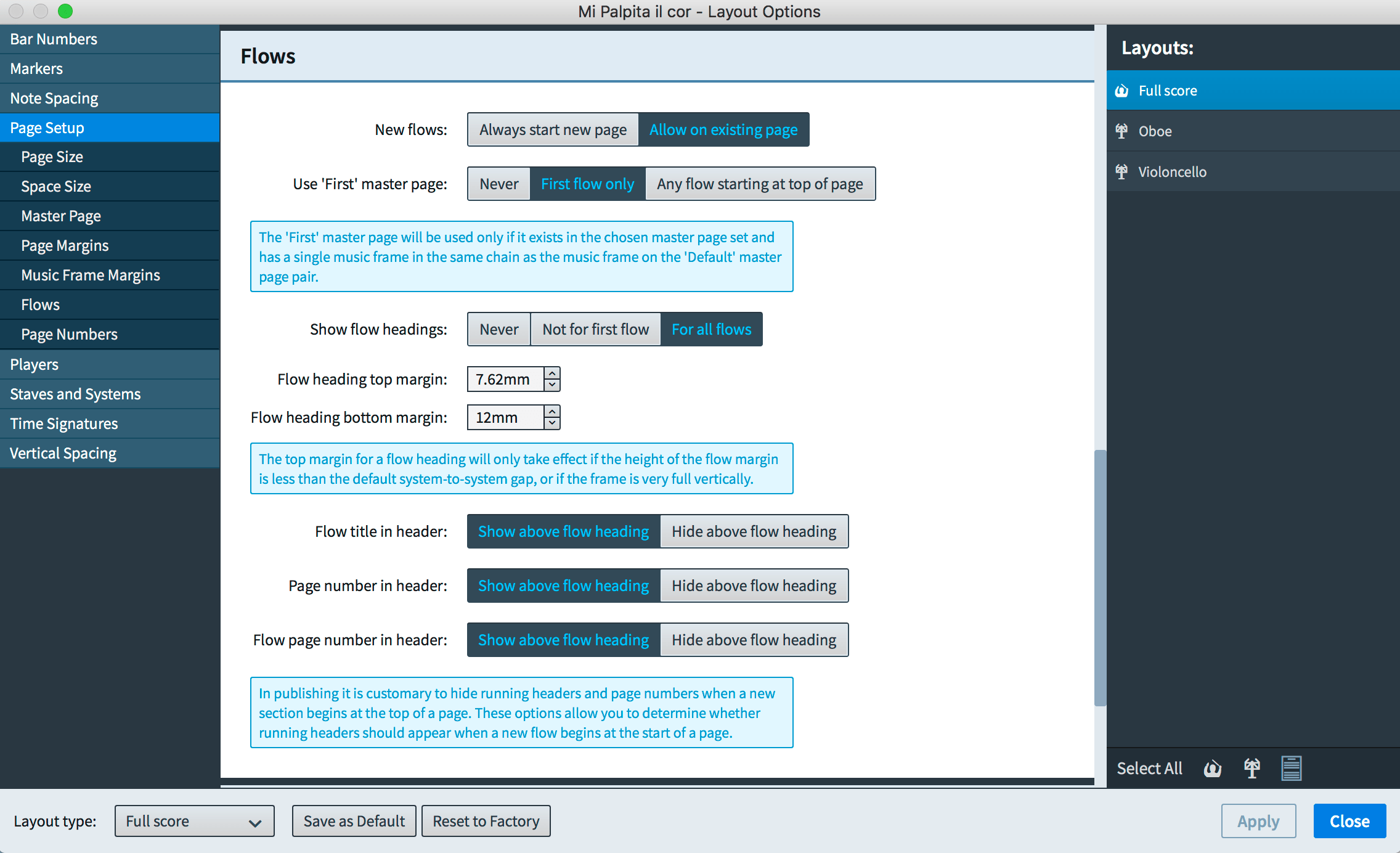 Pretty run-of-the-mill stuff so far. But what about the elephant in the room: Figured bass?

The early music community has been very vocal in this department. Dorico does not yet have a dedicated tool and this has been a sore point. When chord symbols were introduced, we all realized that Dorico’s development team does not do things halfway, and this has made us both patient and hungry at the same time. We know that specialized guitar/chordophone notation is a priority for them at the moment, so we may have to wait a while yet. What surprises will they have in store for figured bass, I can only surmise, but I bet it will be transposable, and perhaps — dare I dream — even magically play back!

In the meantime, we have a wonderful alternative, thanks to the work of Florian Kretlow. As he will describe in a forthcoming blog entry, he has designed a font called Figurato which can be entered at lightning speed as a lyric line.

But, you say, I have already used lyrics in the Handel!

Fear not, one can use the translation or chorus lyric font to this effect. This will work in almost all cases.

Simply change the font in Engrave > Font Styles… and you can type quickly and move from note to note as you would with lyrics. The key combinations are easy to remember, and all manners of style are covered, including ligatures and brackets.

So now we have the complete score: 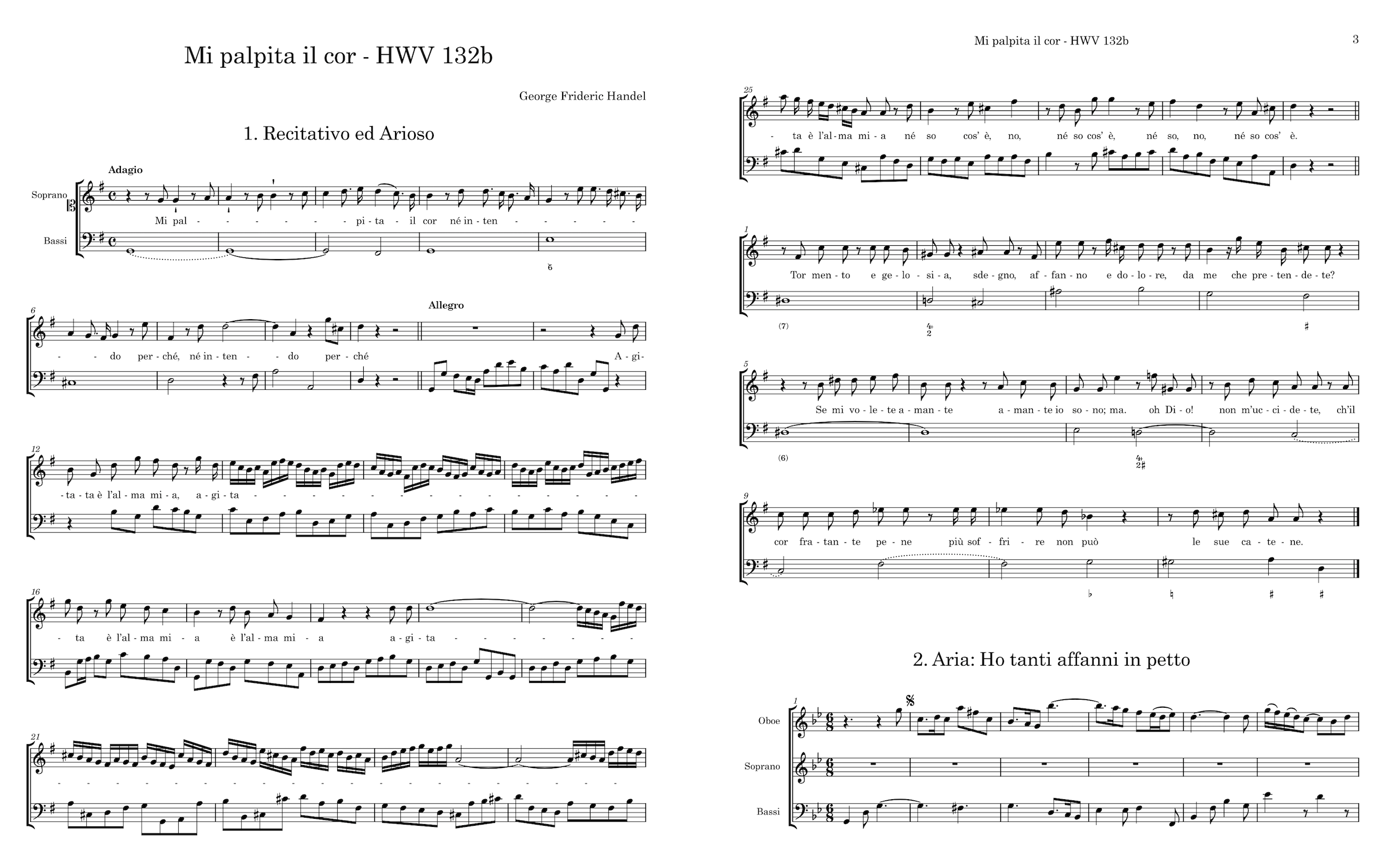 With Florian’s Figurato, we’re basically at 90% of a dedicated tool. I think Florian deserves many bottles of fine wine for his volunteer work on this! His font and attendant instructions can be found at the font’s GitHub site.

I now have a great looking score and a very nice oboe part (with the now automatic tacets). The continuo part, however, would be best presented with the vocal line during the recitatives. There are a few ways to achieve this.

As this is a short cantata, I decided that option 2 was the easiest. Option 1 can work very nicely if there are no lyrics, and I would really recommend option 3 for longer projects.

When using ossias in this manner, it is best to use the Layout Options > Staves and Systems > Ossias and Extra Staves to make system objects go outside ossias. 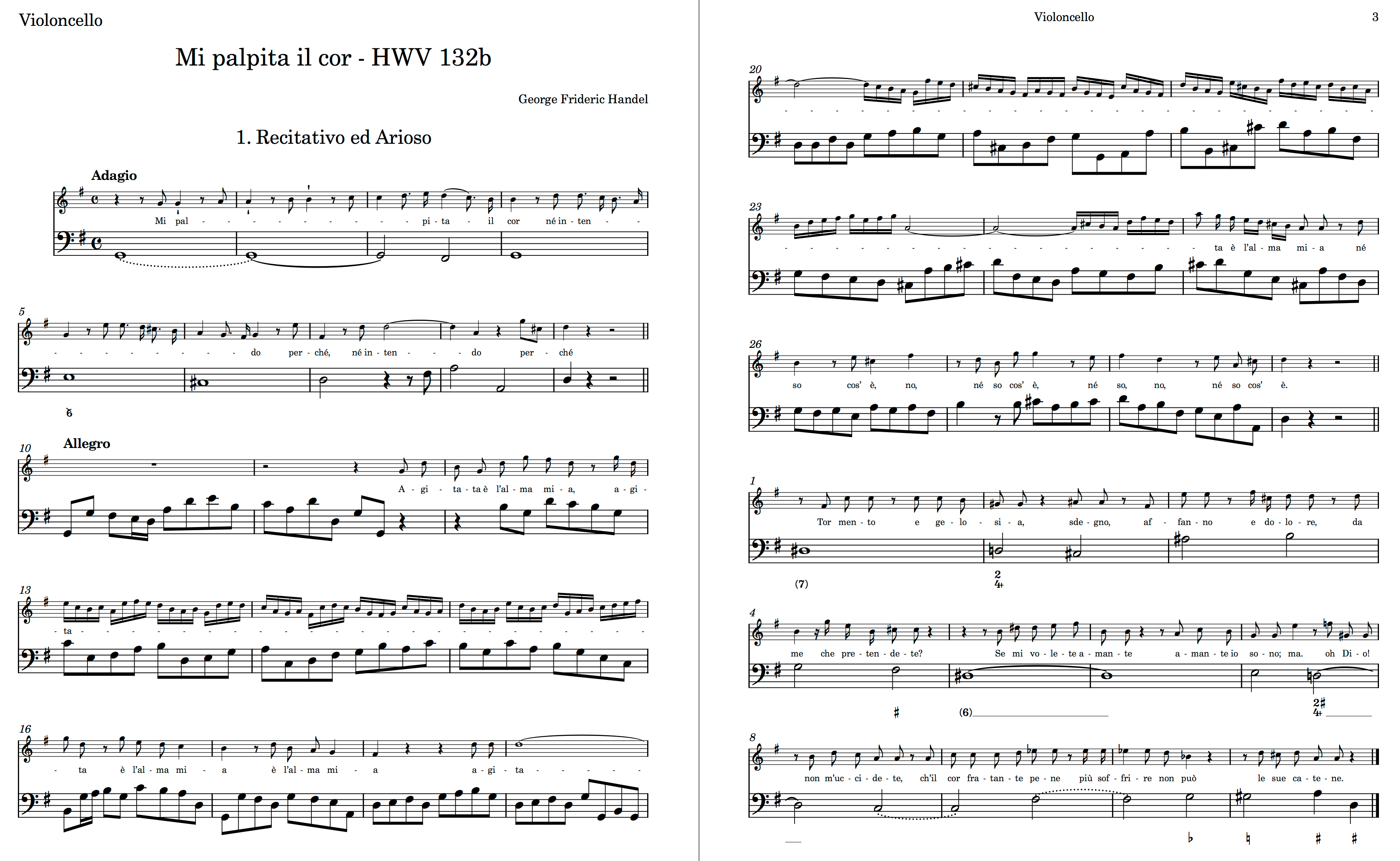 It is fair to say that what I just did here is not earth-shattering. But what about earlier music? We first must review what Dorico does not have at this time in its development:

Given the small team at Dorico and the amount of work they have to do, I will not hold my breath for the first three for a while. My instinct tells me that the fifth missing tidbit is probably much closer on the mysterious Dorico feature timetable as it would be useful for many other types of notation. Ficta? We’ll see. But despite these limitations, the work one can do today is already remarkable.

When Dorico first came out, it was said that few pieces of software were so resistant to workarounds. This was no surprise: Dorico always attempts to keep the underlying semantics of music intact. However, as features began to pile on, more workarounds became available, and many of them can be used more solidly because of Dorico’s adherence to semantic integrity. This was demonstrated early when Alexander Plötz showed us how to write Mensurstriche using the tuplet function, and my example will also show what I mean.

I have chosen to notate an excerpt from the ars subitlior virelai “Sus une fontayne” by Johannes Ciconia (c. 1370 – 1412 – although the OUP excerpt two pictures below gives us different dates) using modern notation because this is how this music tends to be published nowadays (so it can be studied as a “score” instead of individual parts).

The original publication of this virelai is in the Modena Codex (Mod A – Modena, Biblioteca Estense, α.m.5,24) and looks like this in its mensural splendor: 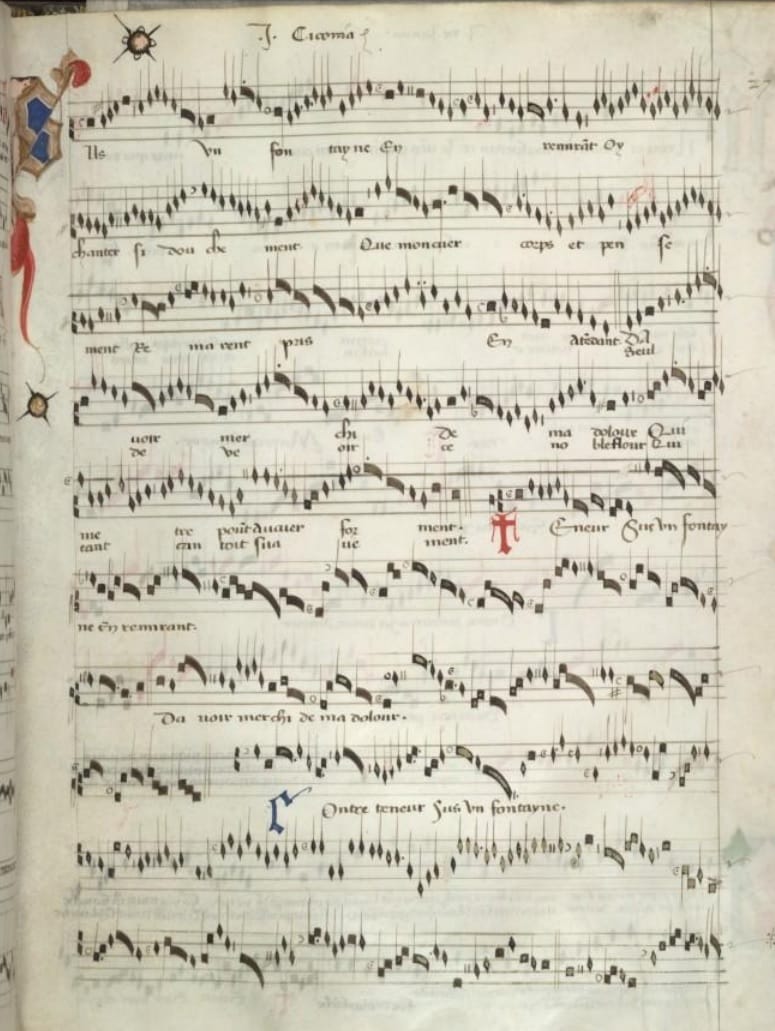 Of course, any specialist performer worth his or her salt will learn to sing directly from this, as it is a very lovely copy. But thankfully for us mortals, Thomas Marrocco and Nicholas Sandon have already done the work of putting this into modern notation — complete with offending barlines — for better understanding of prolation division.

As you can see, not all barlines align. Can Dorico tackle this? (Note: I will not use brackets for this exercise!) 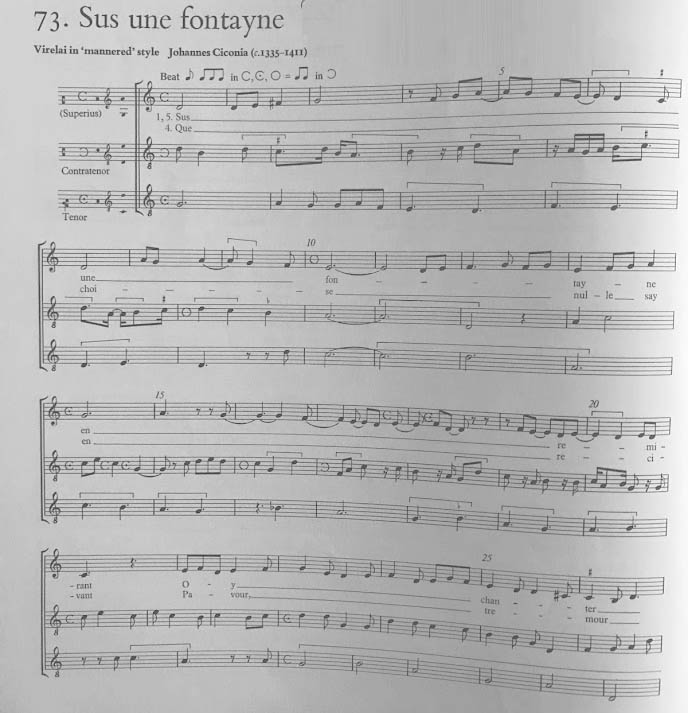 Yes! Dorico actually can, and the result is outstanding.

As the breve started to gain more dominance as a “base value”, the system came to have a collection of signs to describe the metrics of the music according to their “tempus” (a circle of part thereof to describe the basic beats), and their “prolatio” (a dot or absence of dot within the circle to describe the subdivision of those beats). Each of those combinations also had a “diminution” where the basic ration is different when compared to the “undiminished” ratios.

Superposing music using combinations of tempus/prolatio/diminutio results in the complex polyrhythms which are “de rigueur” in ars nova and its even more complex progeny: ars subtilior.

One which uses perfect tempus:

And three which use the imperfect tempus:

The good news is that three of those use effectively the same measure length, and only the “2/4” requires barlines not to align. But still, how do we do that? Well, it does require a bit of thinking and planning…

Because of its ability to use local time signatures and complex tuplets, Dorico handles polyrhythms quite well. In this case, eighth notes in all non-diminished meters are equivalent, and only the diminished meter will require tuplets (of 4:6 or 2:3 ratio) over a 6/8 type meter. The 6/8, 2/2 and 3/4 will have their barlines line up, and only the 2/4 will require independent barlines.

But I also would like to use prolation signs in lieu of modern time signatures. Can this be done? Yes! It’s a little bit of work, but in the Edit Music Symbol dialog at Engrave > Music Symbols… I can replace numbers with the prolation signs found in the SMuFL page under the sub-section “Medieval and Renaissance prolations”.

However, I must be careful: in order to do this I have to delete some time signature numbers using Edit Music Symbol, and I want to make sure that those will not be used elsewhere; and I also have three meters of the same length, but with different time signatures.

So I have decided that since the four meters require four different numerators, they will be entered as follows (always locally, using Alt+Enter on their respective staff):

Sounds like a lot of work? It’s actually not too bad because if we enter the time signatures first (before entering the music); their signposts, if left visible, can be copy/pasted with ease. Similarly, once the first tuplet is entered for the 2/2, one can hide the tuplet and the others will remain hidden after pasting from the first instance.

The result, without music, is this:

Which, once the thinking and planning was over, was very quick to enter.

Now we enter notes and lyrics. Force Duration may be your friend here:

And now, for the magic. We go to Edit Music Symbol and replace the numerator 3, 4, 6, and 1+2 (for the 12) with their respective prolation glyphs like so: 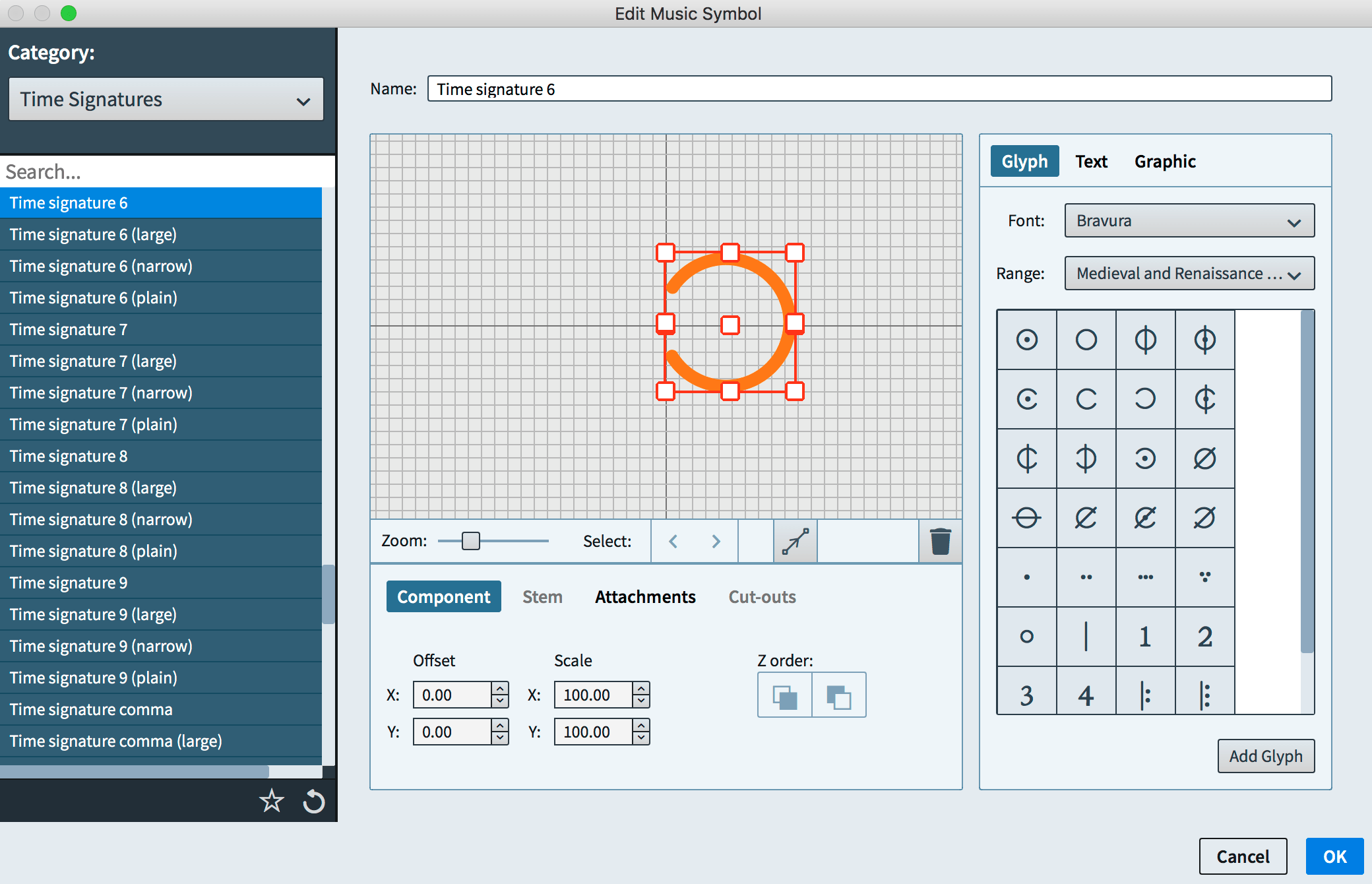 This will affect denominators, but we don’t use those in mensural notation, so a quick trip to Engraving Options to make the denominators invisible must be made. 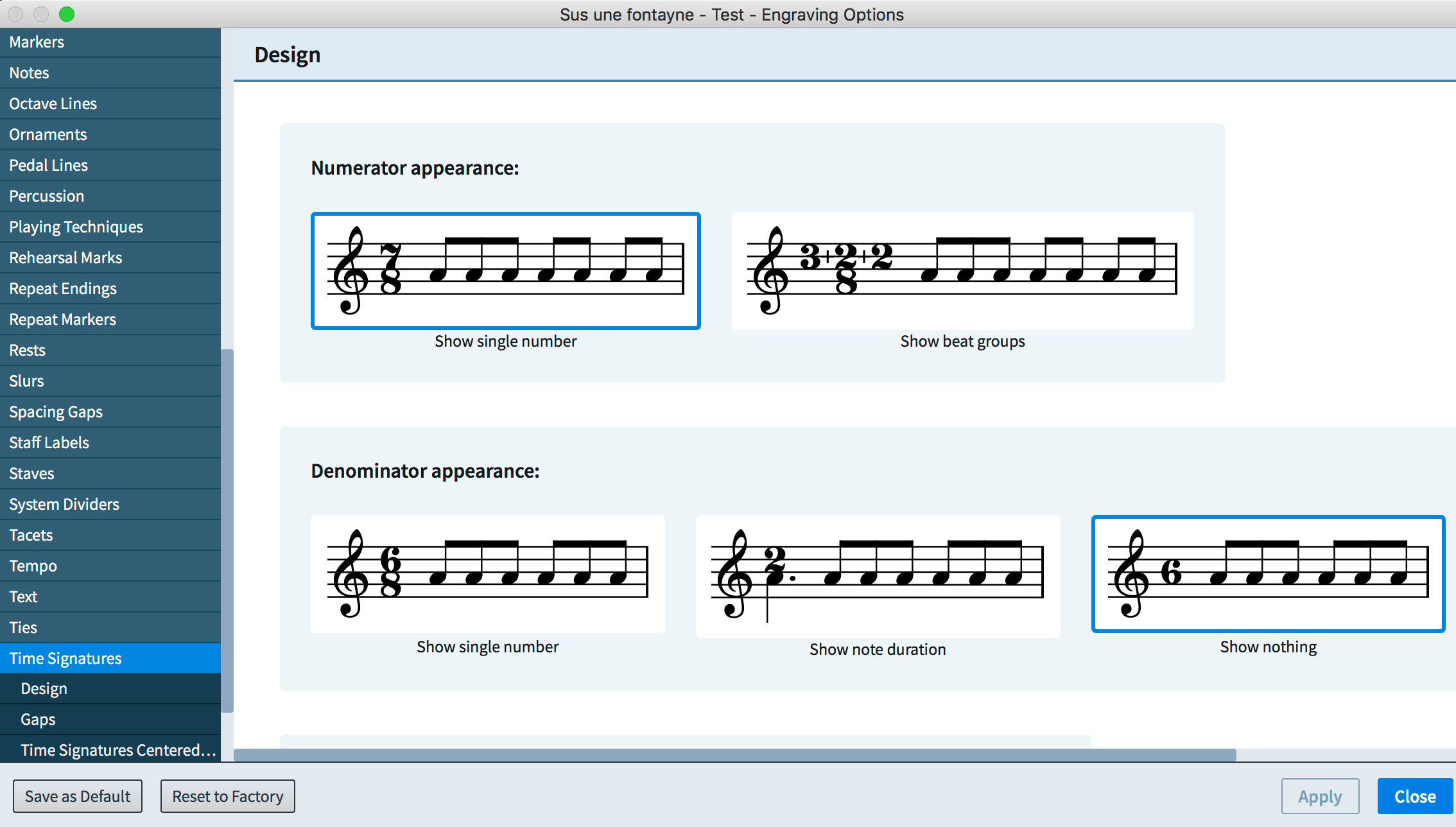 And so now we have the finished product:

To be honest I did have to write the four prolation signs in the middle of measures 14 and 17 as text glyphs after moving the notes with the note spacing tool; this is because, as of now, any meter change in Dorico has to have a barline, and we don’t want those in this instance. And ficta above notes? Quickly created as playing techniques since they can then be displayed correctly above the notes without any fuss.

These tricks can apply to a lot of other music, not just ars nova. Dorico’s arsenal of tools is getting to be quite powerful.

What’s more: except for the four manually placed glyphs in the Ciconia, the notation of that virelai is extremely sturdy because almost all of it makes semantic sense underneath the hood. If I decide to publish at a different staff size or paper size, all I have to do afterwards is move those four glyphs instead of tinkering with dozens of items manually. This itself is remarkable. Even if I decide to use ligature brackets using pedal lines, I will still have sturdy notation; but it is likely that these will be implemented natively in the future.

In the meantime, there is more to what meets the eye in Dorico when it comes to early music.

If you are interested in the files themselves, here they are in Dorico 2.2.1 format at this Dropbox link.

Dorico's powerful correlation between written symbols and a diversity of possible tonal systems is an absolutely incredible breakthrough in contemporary...

Dorico 1.2.10 is available, bringing with it a variety of improvements in all areas of the program including engraving, playback,...