As the music director of Alberta’s Red Deer Symphony Orchestra and the leader of a period instrument baroque orchestra called Rosa Barocca, there’s plenty to keep me busy. But because I can’t sit still for too long, I also have a parallel career as an arranger/orchestrator and I even occasionally dabble in composition. I’m actively using Steinberg’s new notation software Dorico, and have so far created a large number of projects for professional consumption with it.

One of the many features in Dorico that is implemented particularly well is free, or meter-less notation. In fact, each new project one starts in Dorico starts de facto in this manner since Dorico makes no assumptions as to which key or meter should be used in your project. In this post, I’ll show you how I dealt with a meter-less segment of the third movement of a chamber orchestra work which I am presently working on called Asian Postcards and which will be premiered this January. The middle section of this movement quotes an Edo period folk song called “Esashi oiwake”, which is often performed wordlessly as a shakuhachi solo in a very improvisatory manner.

Here are a few bars of the final product:

Dorico offers many tools to create this beautiful-looking score. I will go through not only the process of creating the meter-less segments, but also how to deal with the semi-aleatoric segments in the horn parts.

First, I decided to write directly on the flute layout for better better focus. I selected it and unchecked Show multi-bar rests in Setup > Layout Options > Players > Bar Rests and Multi-bar Rests. I then selected where I wanted to start the section and typed Shift-M to enter a meter and typed X in the popover. This started the free rhythm section.

I chose what the meter-less time signature looks like from the Properties panel: 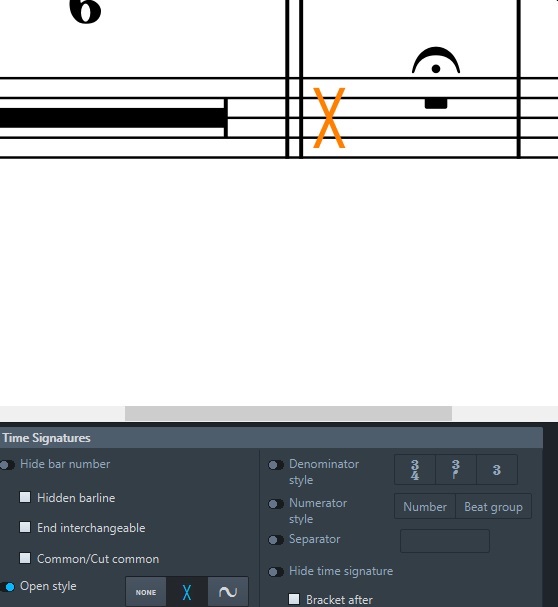 I first entered the outline of the melody without the extensive ornamentation which is a hallmark of shakuhachi playing. To do so, I personally feel it is best to use the Force Duration tool (shortcut: O) in order to get the displayed values exactly the way I want them to display.

I then selected some passages to beam together to my taste and got this result:

Dorico is very forgiving if you change your mind and this sets it apart from other programs. If I initially write the second note as a half note like so…

…and later decide to lengthen it by an eighth note, all I have to do is select the note, click the Insert tool (shortcut: I), make sure the grid is set to eighth notes at the left of the status bar in the bottom left-hand corner of the window and type Shift-Alt-Right Arrow. The rest of the music will simply move over.

Since I have used Force Duration to enter it, it will not be re-notated or re-beamed:

Now that I have finished the basic note entry, I can now enter the myriad of grace notes that will give the passage its flavor. Dorico’s beaming tools will let me group them as I wish, and the Properties panel will also help me choose whether they are slashed or not. Basically, for all of the 32nd notes, one must select the object note, press Enter, press 3 for the correct note value, press / (forward slash) to activate the Grace Notes tool, and type away.

Dorico spaces all of the grace notes with considerable elegance and legibility:

Now, I want to separate the melody into segments by adding barlines and also rehearsal numbers, as each segment will have a semi-aleatoric component under the flute solo. I also want clear legibility as well as easy references for the musicians so they can wait for the conductor cues on a measure-per-measure basis. All we have to do in Dorico is add measures where we want them to appear.

I select the Bars and Barlines tool on the right, click on the plain vanilla Normal bar and click on the score where I want them to appear. I can then add rehearsal letters by typing Shift-A (Write > Create Rehearsal Mark):

Now here is what the project looks like after adding in some long notes and those unsynchronized horn quarter notes underneath the first segment of the melody. I had to remove a few rests by selecting them and using Edit > Remove Rests, and I added some text with Create Text (Shift-X) as well:

Looks good, but one often feels a sense of unease when seeing elements of a score that are supposed to be performed independently from other musicians appear in their “correct” metrical position. This is the case with the horns, where gaps are apparent where the flute has long ornamented passages.

Fortunately, Dorico has a splendid note spacing tool which can address the situation in this layout (it won’t affect the horn layout, but it is of no concern since the quarter notes won’t have to line up with another instrument).

In Engrave mode, we must first flip the Note Spacing switch to make the rhythmic grid appear: 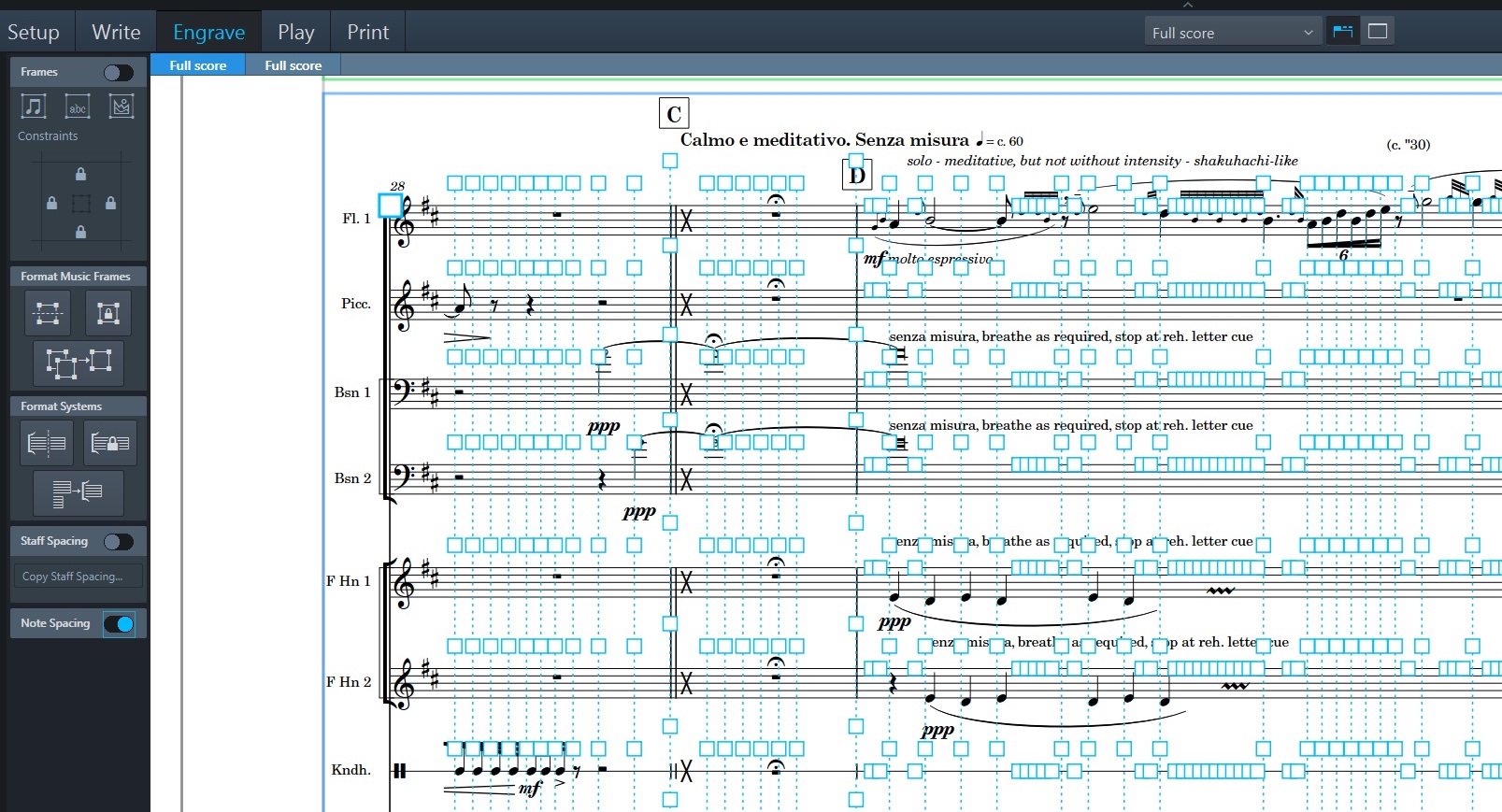 Each blue square represents a rhythm column and can be used to move all notes in that column forwards or backwards. However, in my case, I don’t want to have everything move; I only want a graphical alteration of the position of the horn notes. To accomplish this I have to click on the square which represents that note’s position. When I do, another handle appears — a circle — which is the handle I must select to alter the position of that note without disturbing the other note: 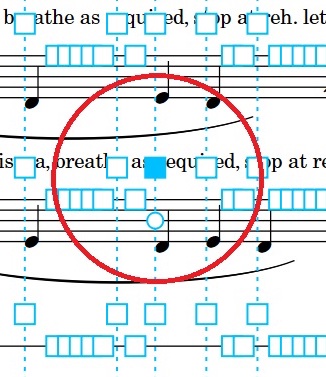 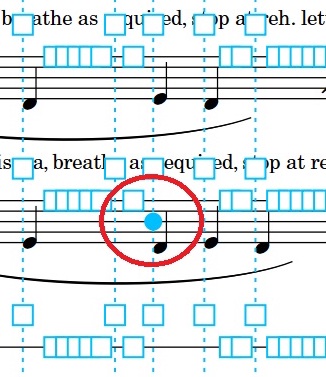 Once selected, I can then type Alt-Left Arrow, or Command/Ctrl-Alt-Left Arrow for greater distance to move the note in its new position: 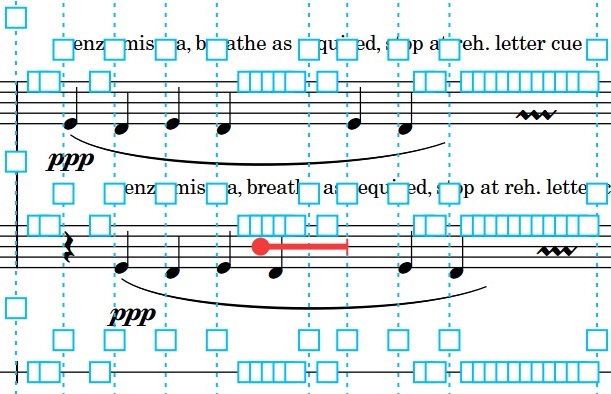 I then do this with all the other notes I wish to move: 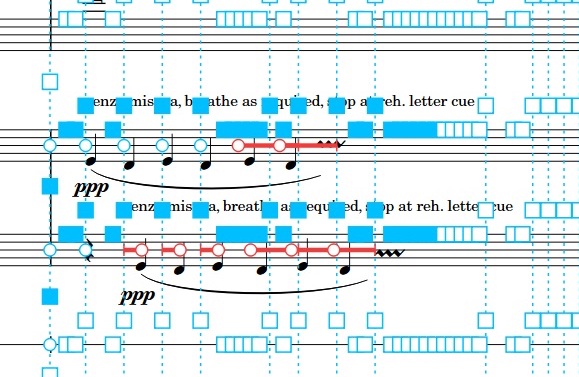 And we now have a result that is musically more correct, despite going against typographical accuracy: 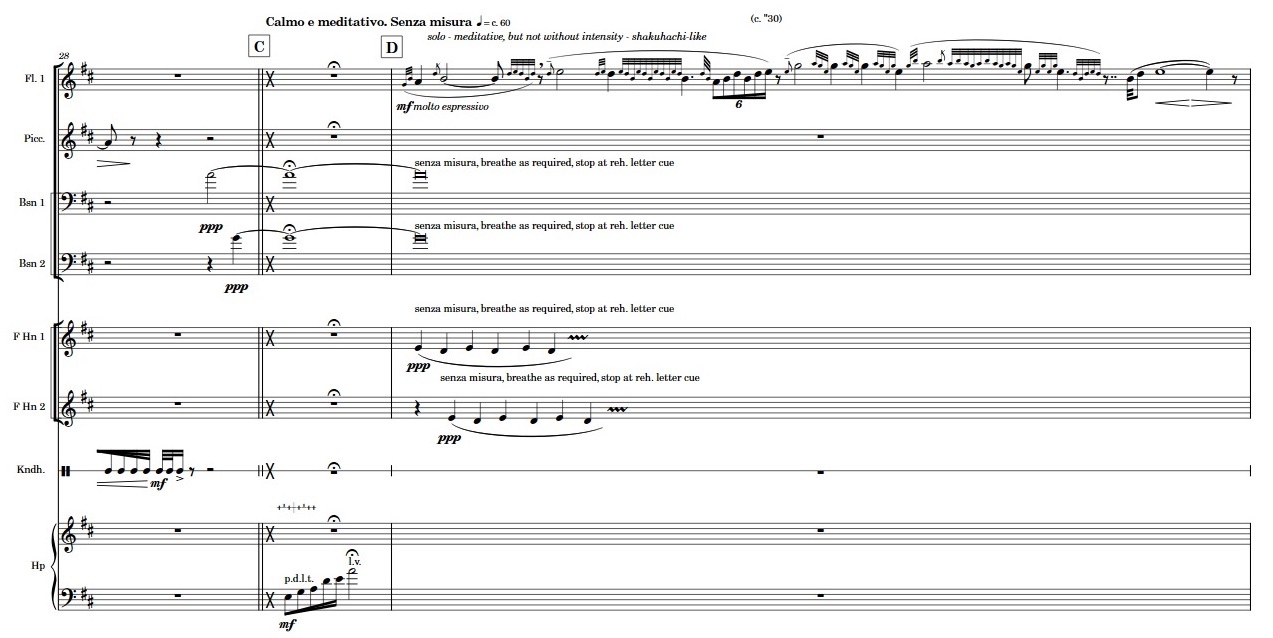 And there you have it.

Of course, I had to work on a bit of formatting as most of the measures take a single system in the score. But that is easily done in Engrave mode by selecting a barline and clicking on System Break. The results are elegant and extremely legible. What’s more, composing the flute part was stress-free as no calculation was required on my part. Adding, removing shortening and lengthening notes could be done afterwards without having to re-enter or renotate anything. In all, composing this movement was a pleasure rather than a chore.

Notation Express for Dorico 4 has been completely rebuilt to take advantage of Dorico 4’s ability to communicate directly with...

Notation Express for Dorico is here. Just like its Sibelius counterpart, it's a fully customized profile for the Elgato Stream...

Steinberg announced that Dorico, its music notation and scoring software four years in development, will be available in one week,...