Tuplet Over Barlines is a plug-in that will create tuplets in Sibelius that appear to cross barlines. It allows you to specify a tuplet starting position, a tuplet ratio and size, and some other tuplet properties. It will create a number of sub-tuplets across multiple bars that when combined function as a single mega-tuplet. By default, there will be a tuplet bracket and number that will span the entire mega-tuplet.

The tuplet can spread over any number of barlines, not just one. Any tuplet ratio, any tuplet unit, and any start placement allowed by Sibelius is possible. Playback is correct (providing Live Playback is enabled). Visual placement of the notes on the staff is correct, with each note aligned to its correct strike point.

If a requested tuplet can fit within a single bar, the plug-in will create it as a normal tuplet.

There are limitations, described in the PDF file that is included when you install the plug-in, on changing the durations of generated notes in the mega-tuplet, though you can easily change the pitches. Please read the PDF file, or the Help dialog in the plug-in, before attempting to modify a created mega-tuplet.

Major thanks to Robin Walker for his significant contributions to the creation of this plug-in.

You can install Tuplet Over Barlines in Sibelius 7.1.3 or later by going to File > Plug-ins > Install Plug-ins and finding it in the Tuplets category.

Here are some ways it can be used. All of these examples were set up and documented by Robin Walker.

In that article, Alex explained how the ability to engrave tuplets over a barline enabled the engraver to reproduce the original period notation whereby the sounding duration of a note extended over a (sometimes hypothetical) barline, instead of using ties over a barline in the modern fashion. The article is well worth reading for an explanation of the technique.

That technique is now available in Sibelius, using the Tuplet Over Barlines plug-in.

In the following example, the locations where the plug-in has been used are highlighted in yellow. 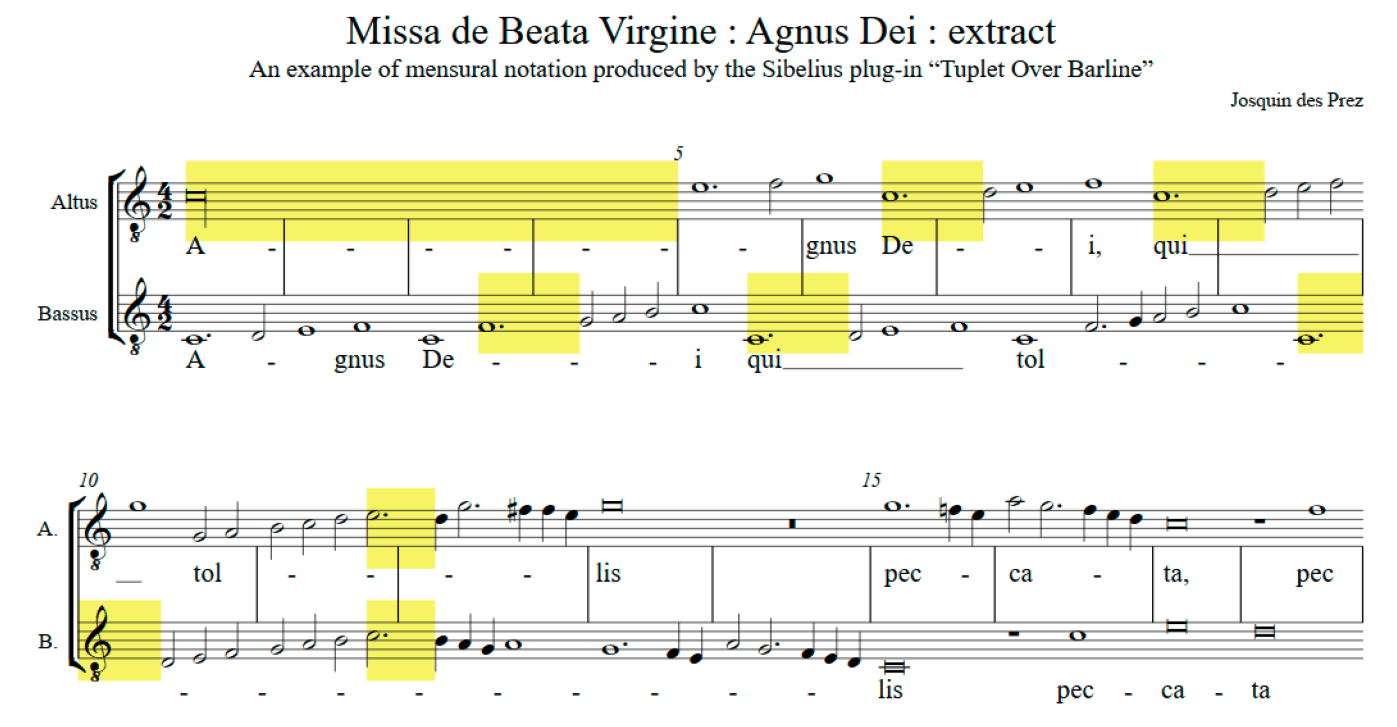 In five cases, the plug-in has been used to engrave a dotted full note over a barline, so that the first full-note’s worth occurs before the barline, and the remaining half-note occurs at the beginning of the next bar: but only one dotted full note has been engraved. This is achieved by positioning a note or rest selection at the desired starting point of the dotted whole note, and asking the plug-in to create a tuplet of ratio 1:1 with unit length of a dotted whole note. Note how the spacing of the second bar is correctly managed, so that blank space is maintained for the residual half-note, before the next note appears. In another two cases, a dotted half note has been treated likewise.

The score from which this screenshot was made not only looks correct, it also plays back correctly: that longa really does sound for four bars, and the dotted whole notes really do sound across the barline.

Credit and thanks to Alexander Plötz for the original concept and article, and for giving us permission to use his example in this article.

The following two examples show how Tuplet Over Barlines can help Sibelius users to engrave scores with polyrhythms and/or “irrational” time signatures.

In the Sibelius Reference, a method is described where polyrhythms can be engraved by creating a single sufficiently large bar to accommodate an exact number of bars of each rhythm on each staff, using tuplets as necessary to fake some of the time signatures. The problem with this method is that the single large bar is constrained to occupy a single system of the Sibelius score, as the tuplets needed for the fakery cannot cross system boundaries.

Tuplet Over Barlines releases that constraint: a tuplet can be as long as you need, and it can be split over bar-lines, and therefore also split over system boundaries. There is no need for an artificially large single bar: the polyrhythms can be achieved using one of the rhythms as the real Sibelius time signature, and the native Sibelius barring for that time-signature. The other time-signatures can be faked with long tuplets spanning many bars and systems, until they reach a point where the different polyrhythms all converge back to a common bar-line.

Of the examples attached, the first is relatively easy, as no note requires to cross a bar-line, and the example could be done manually with tuplets in each bar, but using the plug-in speeds up the operation.

The second example, with deliberately chosen difficult polyrhythm ratios, can only be engraved with the help of the plug-in, because it requires a long tuplet which crosses multiple barlines and multiple systems, containing notes which cross the native Sibelius barlines. 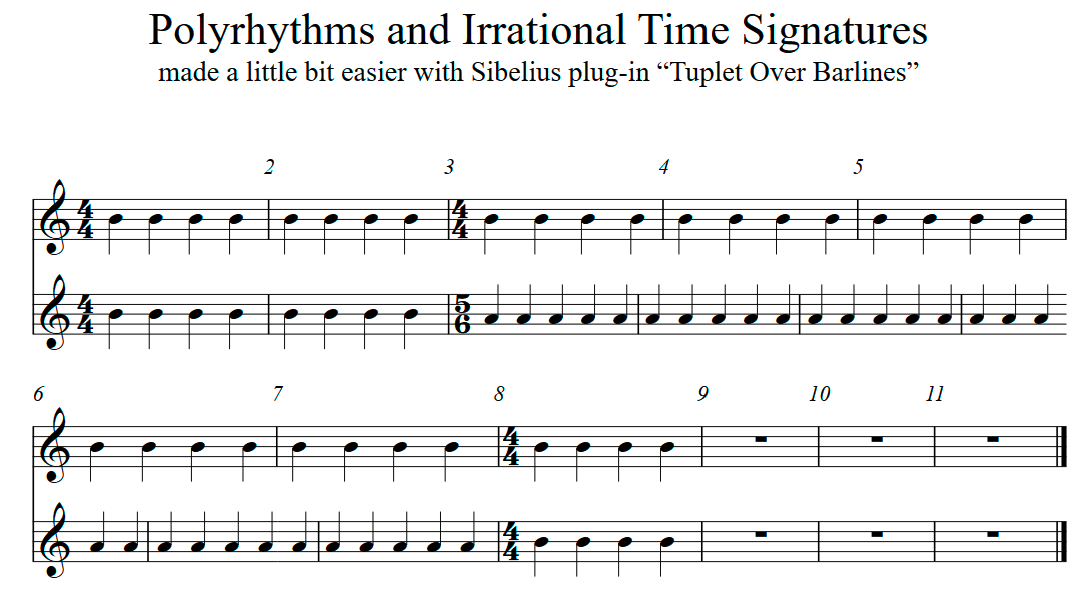 Here is another example of the use of Tuplet Over Barlines helping to engrave a score where multiple time signatures are in use.

This piece by Stravinsky has a castanet playing a steady rhythm in bars of 3/8, while the orchestra switches between bars of 5/16 and bars of 7/16. The duration and tempo of notes are the same for both orchestra and castanet, so this is a rather easy example to engrave, and does not need tuplets to accommodate the different time-signatures. However, the bar-lines occur at different locations for the castanet than for the rest of the orchestra, and so in six locations (indicated by yellow highlights), a castanet 8th note crosses an orchestral barline.

In order to engrave the castanet correctly, for each of those six instances, Tuplet Over Barlines was used to create a 1:1 tuplet of unit duration of an 8th note, on the position of the final 16th of the bar, resulting in a single 8th note crossing the barline. This maintains the emulation of the 3/8 barring. 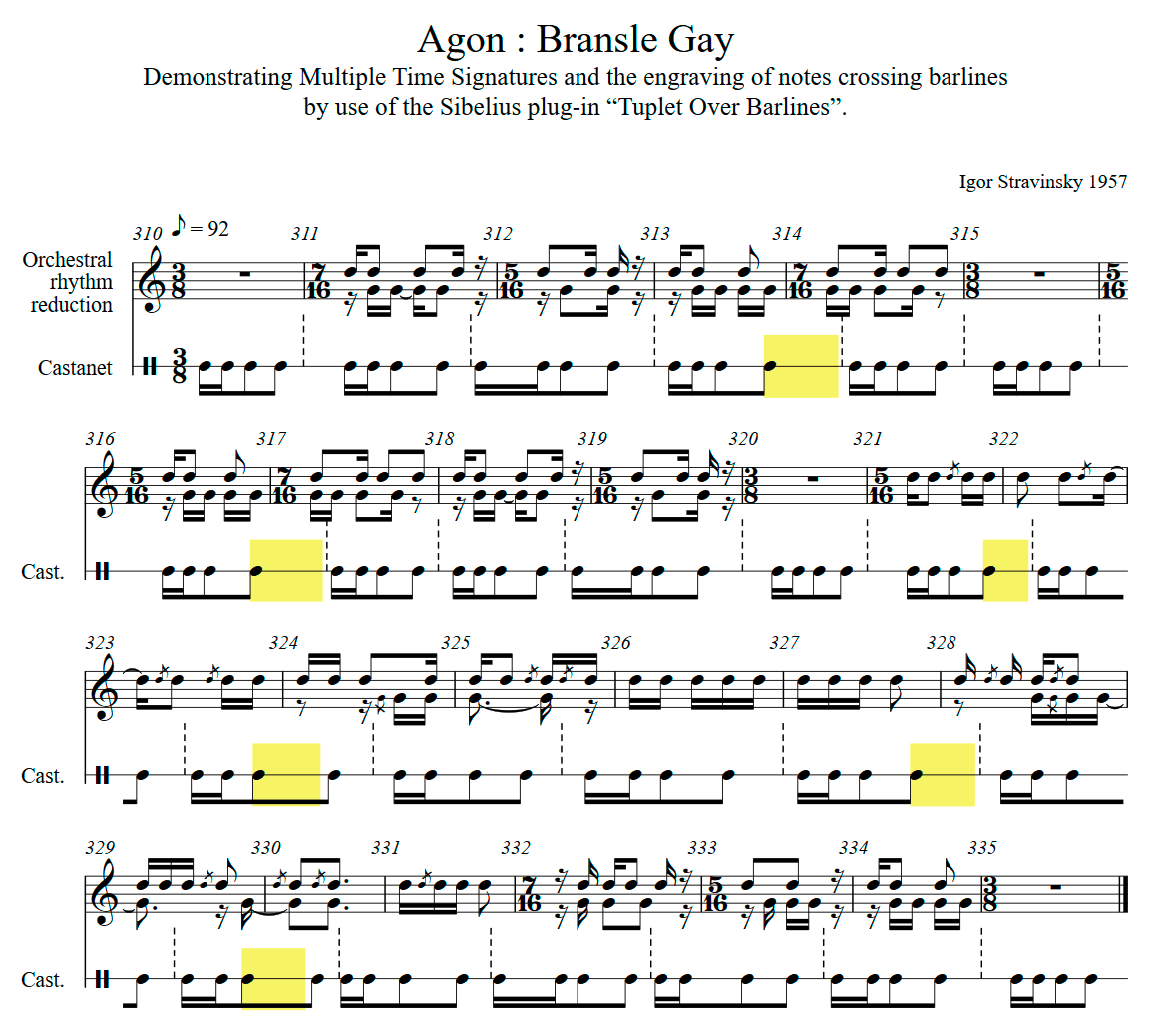 Robin and I spent a lot of intense time working on Tuplet Over Barlines, and I wanted people to understand what happens behind the scenes.

Here is an example of a 7:5 quarter note tuplet that extends over a hidden rest in the final bar. This is what you would see after running Tuplet Over Barlines, with an additional staff of ordinary 16th notes for reference.

The internal rests are used for correct note positioning. Nested tuplets and Live Playback in the last note in most bars are used to make smaller notes appear to be the same size as the other notes in the tuplet.

The Sibelius plug-in Create Tuplets Different Units automates the entire process of creating a tuplet where the "numerator" and "denominator"...

A new plug-in for Sibelius gives users the freedom to create tuplets in any ratio, beyond the limits imposed by...

Student Colin Griggs says, bluntly, “Sibelius Sucks.” Colin says that Sibelius’s handling of composition is neither elegant nor beautiful, that...