Cooperating with chords in Finale - Scoring Notes
Skip to content 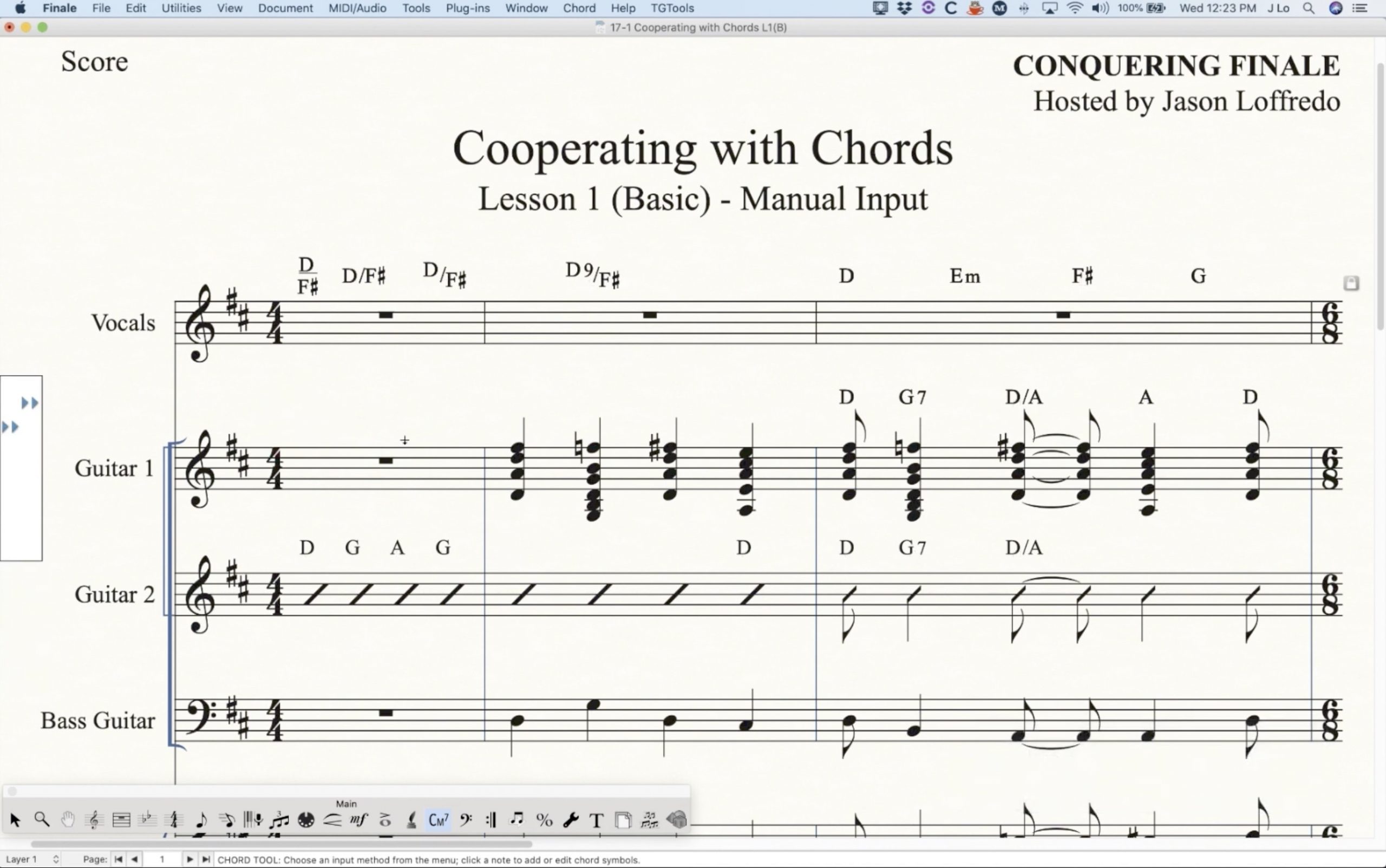 This video takes a comprehensive look at using Manual Input to type chords directly into your score. Everything from typing in Chord roots to suffixes to the three styles of alternate bass notes (9:27) is covered. Learn how to directly type the diminished, half diminished and major 7 triangle symbols at (2:55). I’ll also show how to directly access the Suffix Library while typing in chords (6:29). And if you have ever been confused as to why Finale changes your Cb chord to a B chord, I’ll show you how to fix that (16:42)

Typing in chords is really the most accurate way to enter chord symbols in Finale but sometimes using the Allow MIDI Input function or the Staff Analysis methods of adding chords can make short work of entering simple chord symbols. This video covers both of those methods starting with the Allow MIDI Input method which will convert a chord played on your MIDI keyboard into a chord symbol (1:01). Finale’s algorithm is limited here but if you want to get fancy you can “teach” Finale to recognize what you play using the Edit Learned Chords… utility (5:19). I’ll also show you how the One-Staff, Two-Staff and All-Staff Analysis input methods work (13:02) as well as the built in Chord Analysis… plug-in (17:40).

The Change Chords utility in Finale is incredibly powerful and absolutely worth exploring. This utility will allow you to manipulate a whole selection of chords all at once without having to open the Chord Definition Dialogue Box of every single chord symbol. There are some key functions related to showing/hiding and playing/muting certain aspects of the chords as well as transposing the chord symbols, changing the style of the alternate bass notes or the fretboards. You can also change the size of the chords or fretboards and also reset or change the position of all the chord symbols all at once.

In this video I’ll show you how to create alternate chords above the existing chords. In addition I’ll talk about adding Capo Chords (2:42). Later in the video there’s a discussion about the sometimes faulty algorithm that Finale uses to spell Capo Chords (8:07) and I’ll provide some workarounds for fixing this.

If you use chord symbols in Finale it’s almost a guarantee that at some point you will run into a suffix that doesn’t exist in the default Suffix Library and you will be forced to navigate the dreaded Chord Suffix Editor! I will attempt to demystify this tool as much as I can in this tutorial and hopefully give you a fighting chance at creating decent looking custom suffixes. Also covered is the option available to define the playback of your custom suffix in the Suffix Keynumber Offsets dialogue box (16:27).

Adding fretboards to chord symbols is rather simple in Finale but this video will provide a good primer to the theory behind how Finale manages fretboards. I’ll show you how to choose from alternate fretboards and give you an introduction to the concept of “Fretboard Groups” which will be important when creating your own custom fretboards which is covered in the next video. I’ll also show you how to switch between different Fretboard Styles that are available in Finale.

In Finale you can create your own custom fretboards using the Fretboard Editor. More specifically you can create a whole group of 12 fretboards for every pitch for any given suffix for any fretted instrument you want. This video will walk you through how to add the symbols on the fretboard as well as some of the other options available in the creation of your fretboard and will also show you how to use the “Generate” button to fill in fretboards for each pitch based on the fretboard you’ve created for one or more pitches for that suffix. Later in the video I will do a walkthrough on creating a simple group of fretboards for all 12 major chords for the Ukulele (13:51).

The Fretboard Style editor allows you to customize the look of your fretboards. You can change everything from the fonts and positions of fingerings and fret numbers to shapes used for the open, muted and closed characters and even the spacing and line thicknesses for the strings and frets themselves on the diagram. All of this and a bit more is covered in this tutorial.

Chord symbols by their nature always seem to get in the way so being able to move them around is essential. This video explores all the possibilities and tricks involved with positioning, and later in the video, hiding your chords and/or fretboards. You can Left Align chords (4:09) and there are options available for automatically avoiding collisions of chords (4:45). The baseline adjustments for chords (6:16) is also very important to get a handle on. Also covered is Fretboards (11:30) and how they complicate the positioning issues. Finally, there are many different ways to hide chords and fretboards (15:18) and they all have their advantages and disadvantages so knowing when to use certain techniques versus others for hiding chords can be critical.

Finale provides 7 alternate Chord Styles for you to use including two different Nashville styles, Roman Numerals, Solfeggio and a few other variations. There’s not a whole lot of control over these styles so this video is more of a tour of what the alternate styles look like and provides a little bit of information about how a few of them behave slightly differently than the Standard Style.

This advanced level video deals primarily with changing fonts for your chords. It’s a little more involved than you would think. Particularly when it comes to suffixes it can get confusing so there’s a good explanation of using the Change Chord Suffix Fonts… utility from the Chord menu (3:46). There’s a brief explanation of the Substitute Symbols option (12:24) and towards the end of the video I’ll cover the rest of the Document Options available for chords including scaling the size of the symbols or the fretboards (16:51).

The Suffix, Fretboard and Fretboard Style Libraries can be mighty confusing to wrap your head around. This video attempts to explain how these libraries work conceptually and practically. Copying and pasting chords between files (1:45) will do unique things depending on what suffixes or fretboards exist in each file. I’ll also show you the process for saving and loading Suffix/Fretboard or Fretboard Style Libraries (8:59). And finally, I will take you through a quick tour of some of the Suffix Libraries that come with Finale that you can load into your files if you want (11:42).

For better or worse, Finale will play back your chord symbols if you want. There’s a good explanation of the algorithm that Finale uses for chord playback in this video as well as some great information about how to control exactly what part(s) of the chords you want Finale to play back. Maybe the most important thing in this video is knowing how to STOP Finale from playing back your chords, so at (9:33) I will show you four different ways to mute chords locally or globally.

Polychords are not natively supported in Finale so in this video I will show you FOUR different hacks for creating Polychords. Stick around to the end because the fourth method is my preferred method and is actually quite ingenious if I may say so myself!

Steinberg’s handwritten music font Petaluma was made into a derivation for Sibelius called Pori. What if you want to use...

If you’ve not seen either of the previous posts in this series, they’re here and here. So let’s review our...