This blog post is written by Bob Zawalich, composer, guitarist, software designer, and creator of hundreds of useful plug-ins for Sibelius. In this post, Bob explains how to use Sibelius’s dialog editor to change plug-in dialog default values, should you wish to tailor certain plug-ins to suit your workflow.

Some Sibelius plug-ins remember their dialog settings across Sibelius sessions, but at the start of each Sibelius session most revert to the defaults that are stored in the plug-in file.

I have discussed how plug-ins save defaults in more detail in this post in Robert Puff’s Of Note blog.

If the plug-in you are using retains its settings across Sibelius sessions, then you only need to set the values you want when you run the plug-in.

Editing the plug-in changes the file that contains the plug-in code. It is possible to accidentally corrupt the plug-in file. If the plug-in no longer runs after it is edited, see the instructions below for restoring the original plug-in.

It is best to edit only downloadable plug-ins, rather than those that ship with Sibelius. You can change defaults for shipping plug-ins as well, but see the information below on shipping plug-ins before you edit them.

Changing the plug-in defaults has 2 steps:

After this, the plug-in should come up with the values you have chosen the first time you run the plug-in in a Sibelius session. To test this, close and restart Sibelius and run the plug-in. If the defaults have not changed, see the troubleshooting section below.

How to use the plug-in editor to change defaults

Prior to Sibelius 7, you invoke the plug-in editor using Plug-ins > Edit Plug-ins (default shortcut F9). You will see a dialog like this: 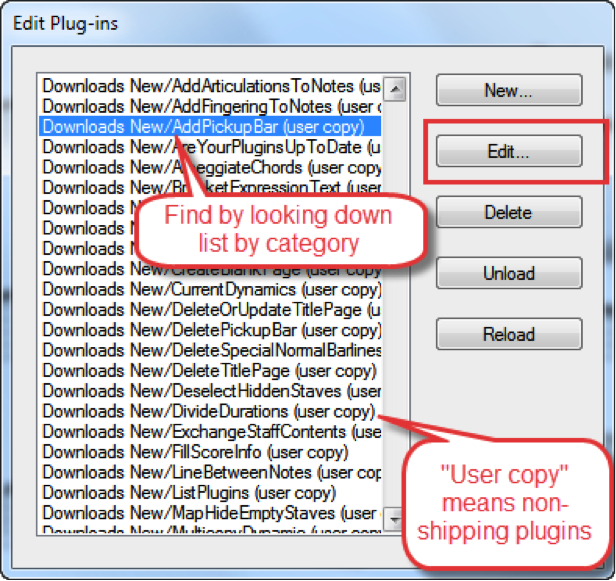 You can find the plug-in you want by scrolling down the list and finding the plug-in in its category. This list is sorted by plug-in name within category, so it is useful to know the category of the plug-in on your machine.

Once the plug-in you want is selected, click on the Edit… button.

In Sibelius 7 and later use File > Plug-ins > Edit Plug-ins (default shortcut F9), and you will see this dialog: 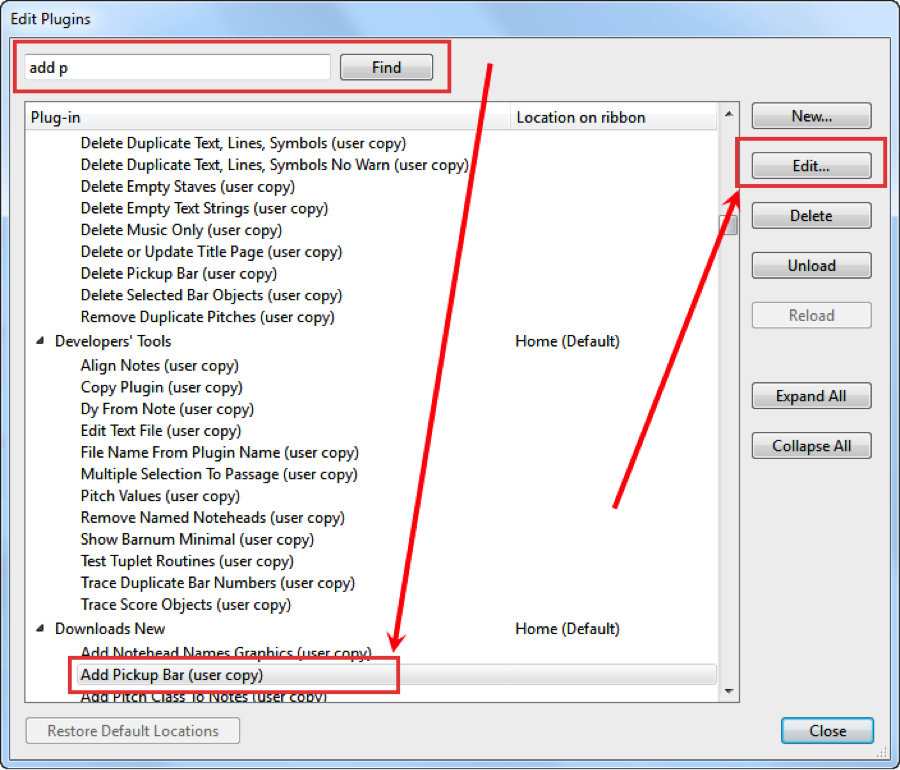 You can find the plug-in you want by scrolling down the list, and finding the plug-in in its category, or you can use the Find box, and type in the plug-in menu name or part of it, and click on Find. Find is not case sensitive and will find any name that matches the bit of text you have typed. In the dialog above I typed “add p”, then clicked on Find a couple of times to get to Add Pickup Bar. (Do not hit Return to use Find; that will just close the dialog). Once the plug-in you want is selected, click on the Edit… button.

The plug-in editor itself will show a dialog like this: 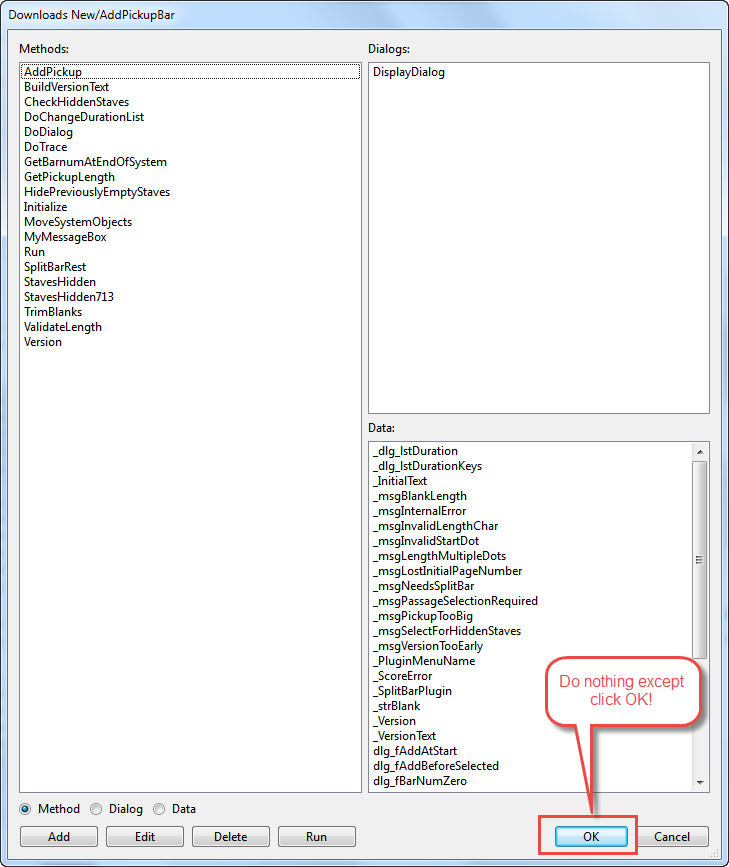 For our purposes, do not click any button except OK. Click OK and Sibelius will rewrite the plug-in file, and will make the current dialog settings permanent.

To test, close and restart Sibelius, then run your plug-in. Your new settings should appear in the dialog.

When you first run the plug-in, its dialog will look like this:

For this example, let us say you would like the plug-in to come up with an 8th note pickup, and not have it renumber the bars. The first step is to run the plug-in and change the settings.

I suggest clicking on OK to ensure the settings are set, and then use Undo to remove the added pickup bar.

Now run the plug-in editor, find Add Pickup Bar and edit it, hitting only the OK button. Close and restart Sibelius and check that the defaults in the dialog are what you wanted.

If the plugin does not say “(user copy)” in the plug-in editor, then it is one of the plug-ins that ship with Sibelius. You should not change the files that are installed by Sibelius, but they provided a mechanism to let us make changes to shipping plug-ins, House Styles, or Manuscript Papers. If you edit a shipping plugin it will tell you that you are editing a read-only file as shown below. If you say “Yes”, then a copy of the plug-in file is made in a user plug-in folder with the same name as the shipping plug-in folder, and any changes will be made to the copy of the file. When Sibelius runs plug-ins, it looks first for a user copy of the plug-in, and if it finds one it will run it rather than running the shipping file. 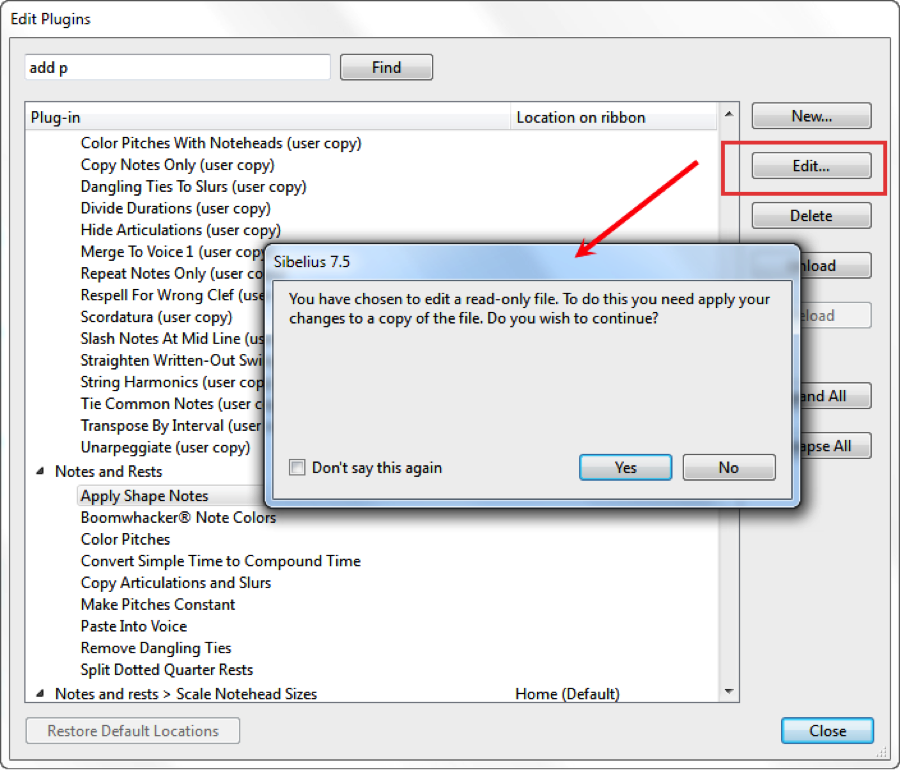 When you update to a new version of Sibelius, it is good to check if you have any user copies of shipping plug-ins. If so, consider deleting them, and re-making your changes to the current shipping version of those plug-ins. That way you will get any changes that were made to the plugin for the new version.

The downloadable plug-in Restore Edited Shipping Files (category Developers’ Tools) can be used to show you if you have changed any shipping files.

If the plug-in does not run at all, see the section on restoring a file.

If there is a serious problem with the edited plug-in, restore the original file. If the plug-in had been downloaded from the download page or you had gotten it from the plug-in author, reinstall the plug-in to the same location, then close and restart Sibelius and you should be back where you started.

If the plug-in is not a user copy, Sibelius will not let you delete it, so you are in no danger of deleting the actual shipping file.

Once you have removed the corrupted file, you can try the whole process again, if you wish, being especially careful to not click on any buttons but OK in the plug-in editor.

If you are careful, this is a very good way to make a simple customization to a plug-in to better fit your workflow.

Clipboards, a new plug-in for Sibelius, lets you store the contents of selections into up to 30 numbered clipboards, and...

Some Sibelius plug-ins take a few seconds to run rather than running instantaneously. Here's how to improve the performance of...