Whether you call it a breath mark, luftpause, or comma, the symbol indicating a breath or slight pause is, uh, comma-n to see in notated music. The marking, according to Elaine Gould in her reference Behind Bars, should be placed “just before a subsequent note or barline.”

In a default Finale document, the marking appears as an articulation (Tools > Articulation). So in virtually all of the Finale scores that I see, the user has placed the comma with the Articulation Tool. After all, that’s where it is by default, so it must be the best way of doing it, right?

Well, not quite. How come?

Let’s take this passage in a full score:

First of all, Finale places the comma immediately to the right of the note it’s attached to — not, as Gould advises, just before a subsequent note or barline.

OK, so let’s drag the commas so that they appear where Gould suggests:

That wasn’t so hard. Let’s now take a look at our linked part, though:

What happened? Well, dragging the articulations moved them by a fixed horizontal amount — not by their position within the measure. So when we dragged them in the score, their position in the parts moved by the exact same amount. Because the note spacing in the part is tighter than that of the score, the commas became wildly displaced.

Sure, we could drag them back in the part, because positioning changes made in the part don’t affect the score. But that’s a whole lot of dragging.

It would be better if the commas were just placed correctly every time, right?

If you’ve picked up on the fact that the comma’s position should be affected not by the note to which it affects, but by that of the next note, you’re almost there. It’s true, we could create a comma articulation with those offsets, and then place the comma on the subsequent note.

But what if, like in the third and sixth bars of our example, the subsequent note is in the next bar? If that note occurs in conjunction with a system break, we won’t see it. And if the next bar has no notes at all, we won’t be able to place an articulation at all.

Hmm… so much for that idea.

The solution: Use the Expression Tool

The answer, then, is to not use the Articulation Tool at all. Instead, we’ll create a comma (actually two) using the Expression Tool.

First, let’s create a comma as an expression that’s attached to the subsequent note.

Go to Tools > Expression and double-click on the note after the one the comma applies to. In our example, it’s the G on beat 3 of the fifth bar.

In the Main tab, name it something like “Comma on subsequent note” and create a comma using the Maestro font at 24 pt. 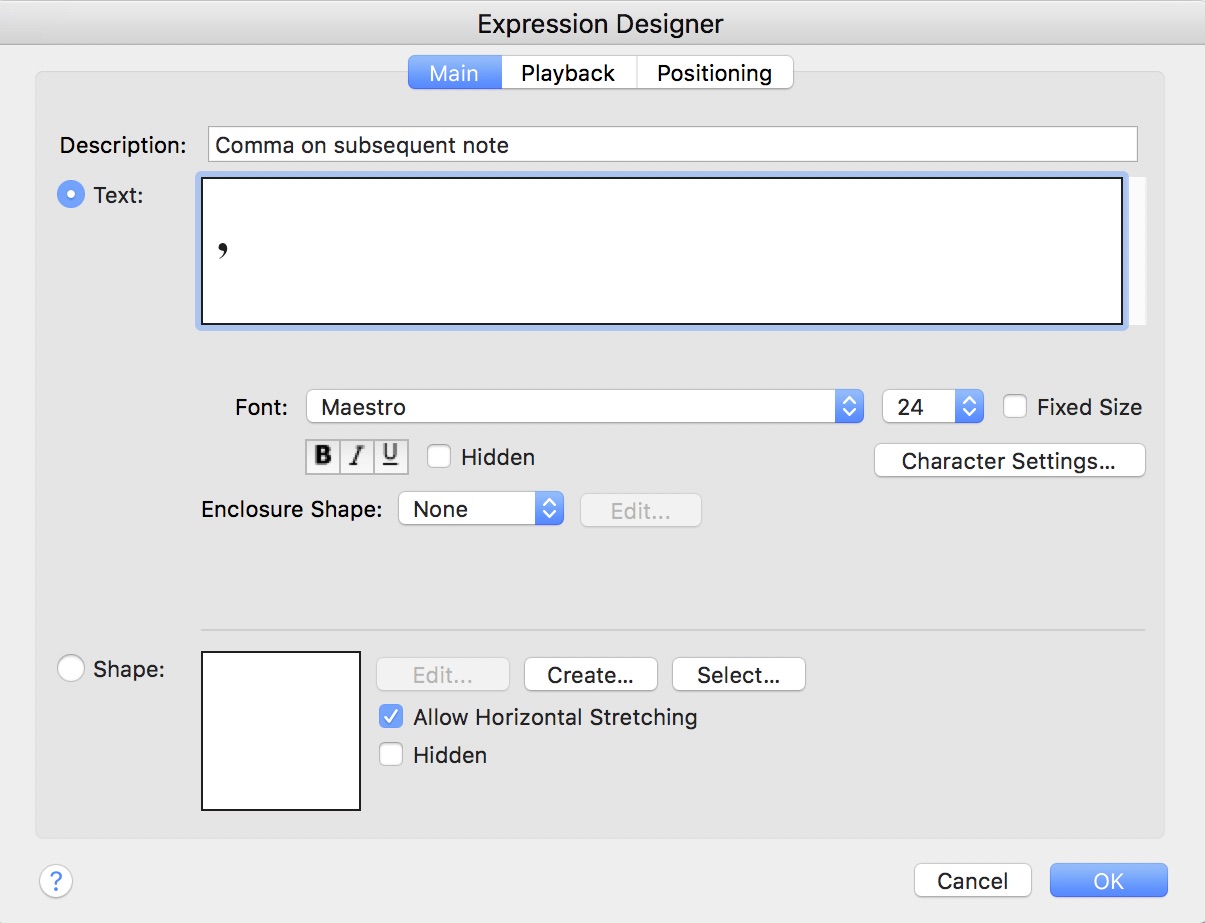 Then, head over to the Positioning tab. Set the Horizontal Alignment to Left of All Noteheads and the Additional Horizontal Offset to -2 spaces. Set the Vertical Alignment to the Staff Reference Line and the Additional Vertical Offset to 1.5 spaces so that it appears just above the top staff line. You may want to adjust these values to your taste, but these generally work well. 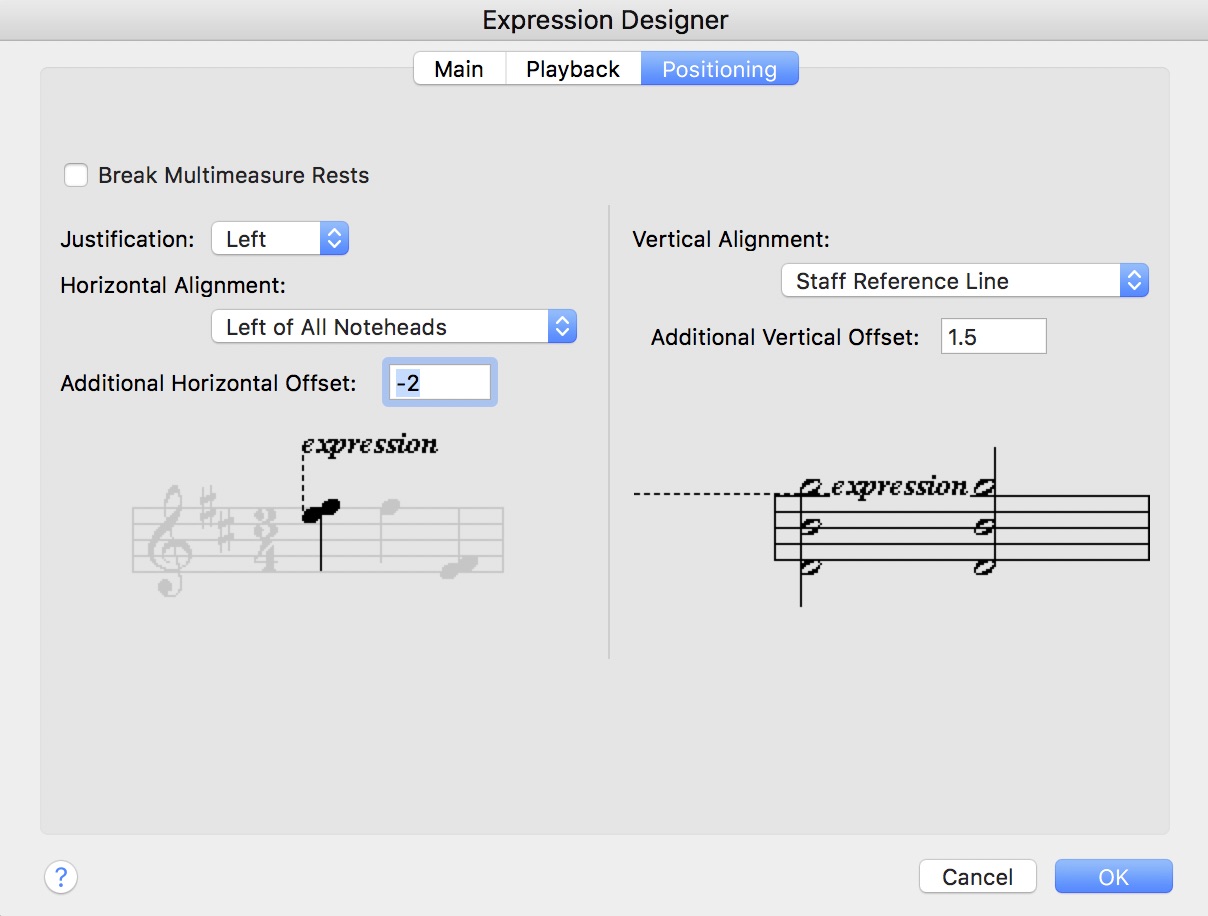 Click OK and then Assign to exit out of both dialogs, and you’ll see a nicely-placed comma as an expression. What’s more, the blue attachment line shows you the note to which it’s attached.

Let’s do the same for commas attached to the right barline. Still in the Expression Tool, double-click in the third bar. If it isn’t already selected, click on the comma we’ve just created, and click Duplicate, and then Edit… 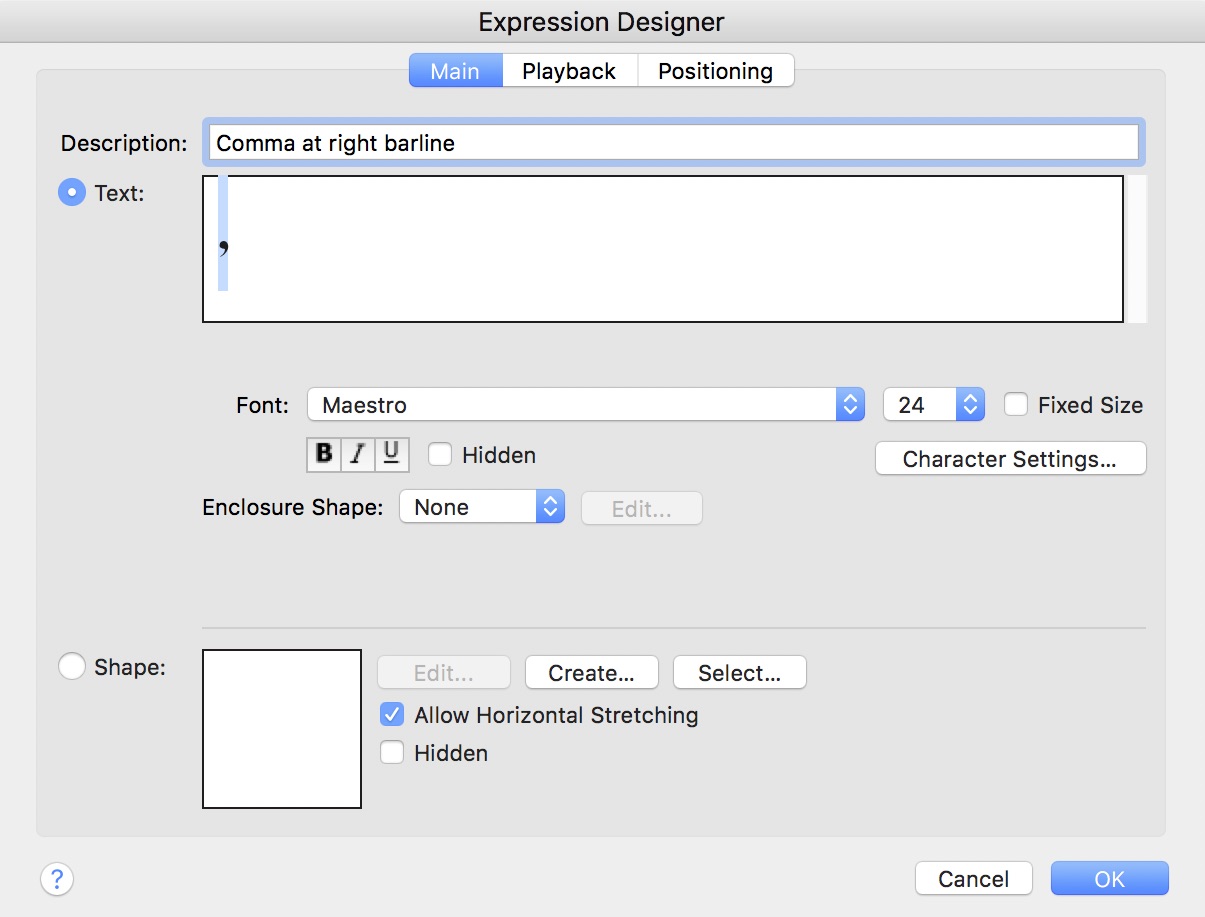 On the Positioning tab, set the Horizontal Alignment to Right Barline. Leave all the other settings untouched. 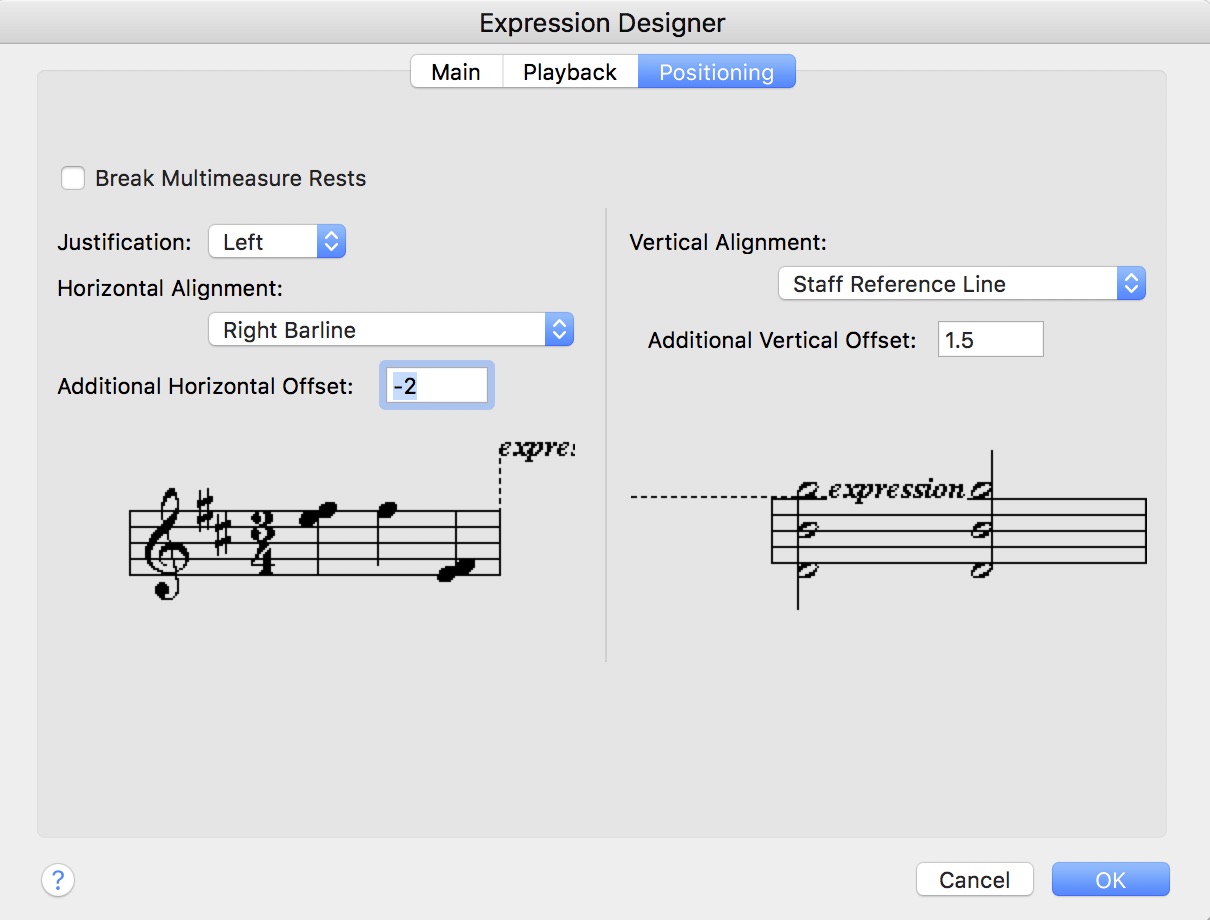 Click OK and then Assign to exit out of both dialogs. The comma is perfectly positioned.

I’ll go ahead and apply it to the end of the sixth bar as well. Now, for the true test, let’s take a look at our part:

Now, you may be thinking that you don’t have to mess about with two separate commas if you just set the Horizontal Alignment to Horizontal Click Position; after all, Finale will respect that position in the score and the part. That’s true, but the method outlined above will ensure consistent placement every time, so you don’t have to be quite a compulsive clicker to get the same results every time you place a comma.

The one caveat to this approach is that these expressions won’t have the playback properties of the articulation, meaning that the note’s duration won’t be shortened.

Did you find this useful? Have other tips you’d like to share? Let us know in the comments.

Introducing Scoring Notes Snacks, where we take music notation software topics and make them into bite-size portions for you to...

Here's an ingenious way to tame the comma beast: Consistent placement of breath marks in Sibelius by creating them as...

Here's how to place fermatas on bar rests in Finale, and why placing them as articulations yields more consistent results...