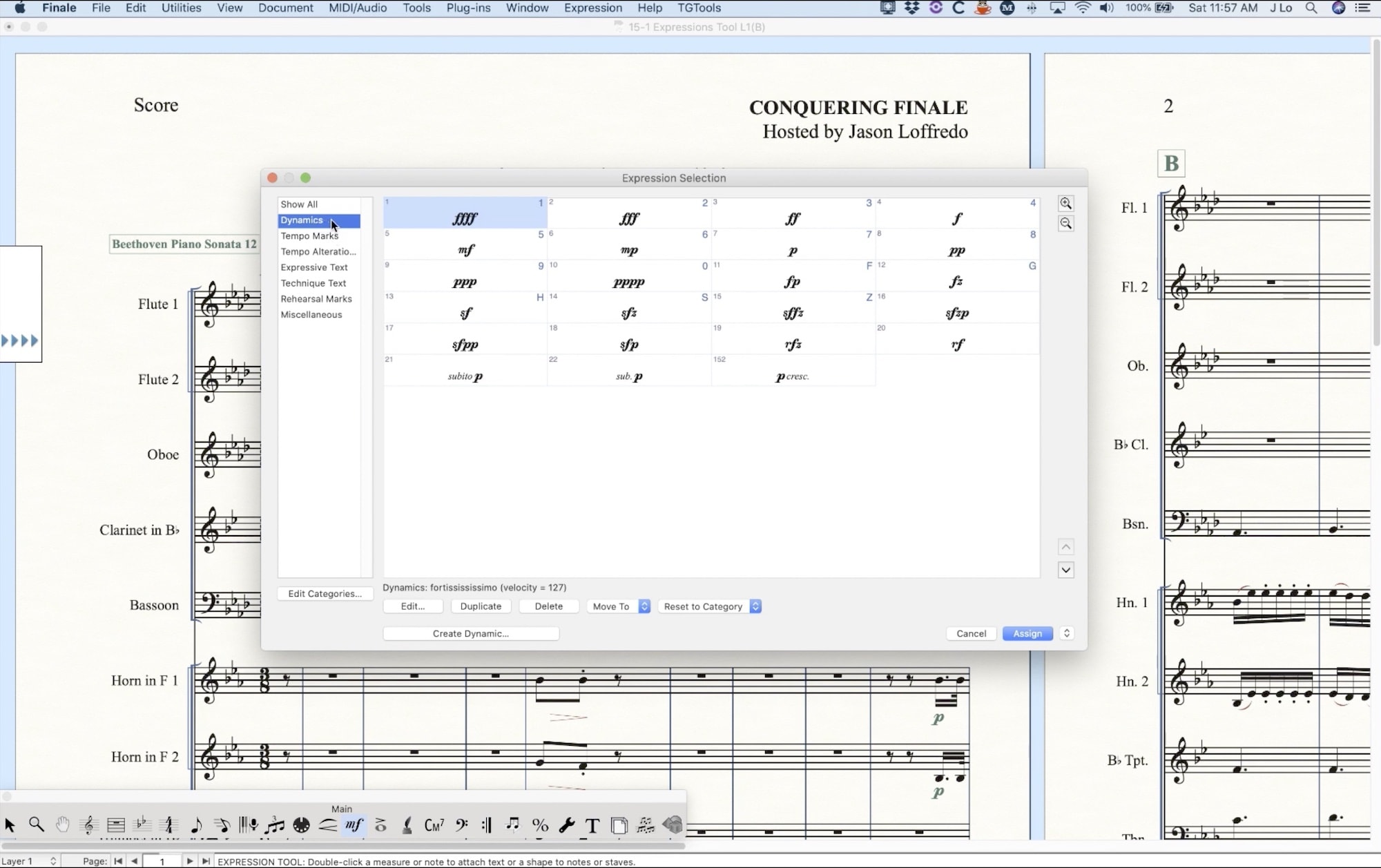 In this introductory video you’ll learn the basics of how the Expression Tool works in Finale. A handful of tricks for adding Expressions to multiple staves (7:34) as well as how to use and program metatools (12:25) for Expressions are covered in this video. I’ll also show you how to create your own Expressions (17:34).

Once an expression exists in your score it is rather novel at first glance to manipulate the position of that expression by simply dragging it around, however, as with most things in Finale, there is sometimes more to it than what’s on the surface. This video will dig a lot deeper into the various ways you can drag an expression, the difference between moving System Expressions and Staff Expressions and the functionality of the Expression Baselines. Simply dragging an expression around the page is not always the best solution in the long run so learn these techniques and you’ll save yourself some headaches down the road. There’s also a demonstration of the TG Tools plug-in that will allow you to align dynamics horizontally (8:44).

The Expression Assignment Dialogue Box is a somewhat forgotten about part of the Expression tool. With the options available here an Expression can be manipulated in several ways that provide more flexibility when it comes to things like its horizontal attachment point in the measure, whether or not its playback effect is applied to all or just a single layer not to mention whether the Expression itself appears in the Score only, the Part only or both! You can also adjust the finite horizontal and vertical positions here.

This is the first of 7 videos dedicated solely to the Expression Designer! To say that it is vast and powerful is an understatement! In this video you’ll get a very quick overview of the Expression Designer itself and we’ll start to dive into the “Main” tab where you will determine what gets shown in your score-either text or a shape. Specifically we’ll look at all the ways you can manipulate the actual text in the main text field. There are font, style, baseline, tracking options available and all kinds of inserts and tokens you can use. The sky is really the limit!

Any Expression that uses text can have an enclosure. Finale provides a variety of different enclosures from ellipses to rectangles to octagons and they’re all customizable in several ways. Enclosures can also be set to “Opaque” which will hide all the material behind the enclosure which is particularly useful when you combine that with an enclosure with a line thickness set to 0.

Shapes from the Shape Designer can also be used as Expressions. In this tutorial I’ll show you how to do that as well as some of the tricks and oddities that appear when using Shapes as Expressions. Shapes can be stretched in your score but Finale’s handling of that is a bit perplexing. A little information from this video will go a long way in preventing some head-scratching in this regard.

The default positioning of an Expression determines where it appears in relationship to the notes or the measure that it’s attached to. In this video I’ll show you all the options available for controlling the default positioning of individual Expressions. There are left, center and right justification options, 14 horizontal alignment options and 10 vertical alignment options plus offsets for horizontal and vertical alignments. Understanding how all of this works will go a long way towards setting up your Expressions in a way that will reduce the amount of time you spend moving them into place manually. Also discussed is the options for allowing Expressions to break multimeasure rests.

Expressions can have playback functionality attached to them. This video looks at the playback types that are related to tempo and style. Tempo (4:13), Play/Ignore Tempo Tool Changes (12:44), Swing (13:42), Apply Human Playback On/Off (18:44), and SmartMusic Marker (23:09).

Part two of the Expression Designer Playback deals with playback types related to MIDI and/or Controller type of data. Controller (0:26), Key Velocity (4:45), Transposition (12:08), Pitchwheel (13:27), Including a how-to on using Pitchwheel playback to get microtones to playback correctly (15:04), Channel Pressure (17:54), and Restrike Key (19:12). A very brief overview of how the Executable Shape Designer works is also included towards the end.

The remaining playback types are related to patch and sound type of data. Channel (used when Finale plays back through Audio Units) (0:24), Patch Change (used when Finale plays back through MIDI) (9:47), Percussion MIDI Map (11:39), and finally the Dump function (14:38). In the Channel portion of this video there’s a good explanation about how to get Keyboard parts to play back “patch changes” using the Channel (or Patch Change) playback functionality.

Some interesting things can occur when you copy and paste Expressions between files in Finale. I will walk you through all the possible scenarios related to whether or not Expressions or Expression Categories are identical or unique between the files. I will also show you how to export and import Expression Libraries.

Here you’ll get an exclusive look inside my own personal template so that I can show you some of the unique ways that you can use Expressions including creating custom categories with specific fonts and/or positioning and/or Score Lists and various ways to use music characters as Expressions in order to place them in very specific locations on or around notes or the measure as a whole. Hopefully this video will give you some inspiration to create your own custom Expressions for use in your own templates.

A summary of Sibelius and Finale compatibility information with Apple's newest operating system.