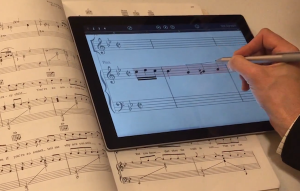 StaffPad, the new music handwriting app for Windows 8.1 pen-and-touch devices like the Surface 3 and Surface Pro 3, was announced a little more than two weeks ago. Since then, there has been a lot of interest in it, along with many questions about how it works.

I thought I’d do a more detailed, “real-time” video showing how to use StaffPad to write a few bars of Billy Joel’s “Vienna”, including two-voice music, triplets, slurs, grace notes, duplicating music, using the eraser, and the expression layer — and how to correct recognition errors when they arise.

A couple of things to consider: StaffPad is still at its initial version 1 release, with maintenance updates and feature additions promised by the developers in time. Also, even though I’m “copying” music in the video for the purposes of the demonstration, StaffPad is not really intended as an input replacement for desktop scoring programs, which will surely be much faster at that task with customizable engraving rules. Rather, I see StaffPad’s real potential as a notation-based creative composing and arranging tool, either on its own, or as a complement to the more advanced desktop programs via MusicXML export and import.

I hope to do more structured tutorials in the future, including how to work with StaffPad in conjunction with desktop programs, but for now, enjoy!