When you first set up a score in Sibelius, the names of the instruments are automatically assigned when the score is created. If you’re writing, say, for classical orchestra, you’ll get the full name of each instrument at the left of the first system, and abbreviated names thereafter. Even if you think you’ll never need to change these from their defaults, chances are you’ll want to make an adjustment sooner or later. Luckily, there are a number of tools and tricks available for you to do so.

Double-click to change an instrument name…

If you don’t want the abbreviated name to show at all on subsequent staves (like for a string quartet where the instrumentation is obvious), go to Appearance > Engraving Rules > Instruments. Under Instrument Names, switch Subsequently to None.

…but if you want to change the actual instrument or its transposition, use an Instrument Change instead

It’s important to remember that simply changing the name of the instrument doesn’t actually change the instrument. As an extreme example, you can re-name “Trumpets in Bb” to “Bananas”, but Sibelius will still regard your starchy fruit as a veritable brass instrument.

More seriously, simply re-naming “Trumpets in Bb” to “Trumpets in C” isn’t good enough. You need to make an instrument change for this. To do this:

You will find that Sibelius not only automatically changes the name of your instrument, but it also changes its transposition, and even its sound, if, say, you’re using this feature to double a sax part in a clarinet part. 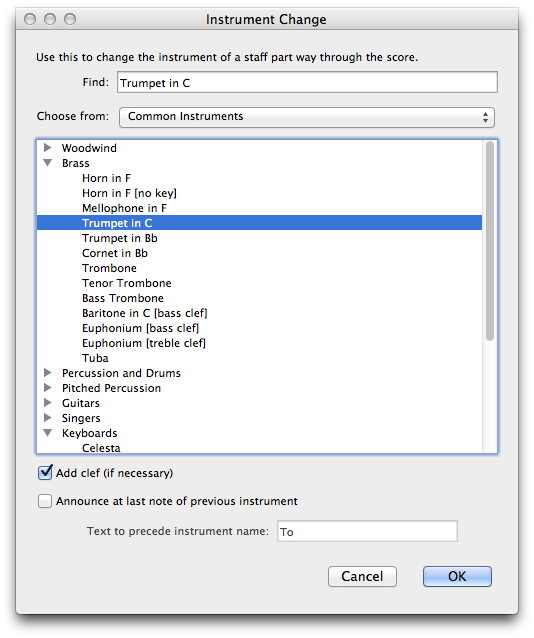 Let’s stick with our bananas — uh, trumpets. If you have two trumpets sharing a staff, you could well type “2 Trumpets in C” or “Trumpets 1&2 in C”. But you can kick it up a notch by doing this: 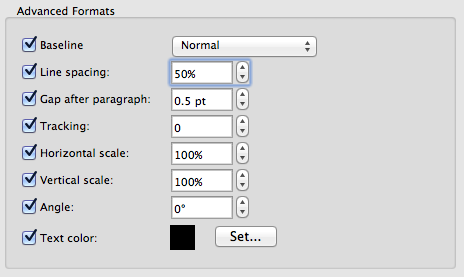 OK out of the dialogs. Double-click on your instrument name in the score to change it by typing:

Once you get the hang of that, you can do something similar for short names and other instruments in your score. Keep in mind that you will need to add an extra Return to any instrument names that span more than one line.

Incidentally: if we back up to the Edit Text Styles dialog for moment, and click on the Horizontal Posn tab, you’ll find the option to left-justify, center, or right-justify your instrument names:

Double-clicking is tedious: Use a plug-in instead

Double-clicking to change the occasional instrument name is no big deal. But what if you want to change all of them in your score?

Edit Instrument Names allows you to change all the instrument names in your score in one dialog. Edit Part Instrument Names is similar, although it provides for instances in which you would want the name of your part to be different than its corresponding name in the score. 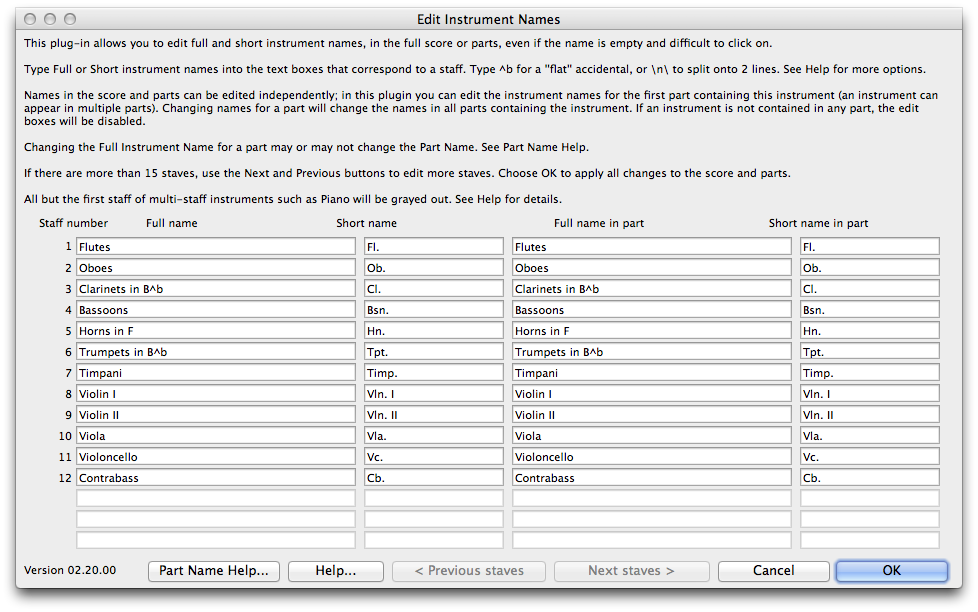 A video tutorial on using plug-ins, including Edit Part Instrument Names demonstrates this concept further beginning at about the 6-minute mark.

You can, of course, use tokens to apply formatting changes to your instrument names from right within the plug-in.

Edit Instrument Names, and Edit Part Instrument Names may be downloaded directly through Sibelius 7 or later at File > Plug-ins > Install Plug-ins > Text. Users may also install them manually in Sibelius 6 by visiting the plug-in download page and following the usual manual installation procedure, or by using the Install New Plug-in plug-in.

If you have a need to reiterate the name of your instruments from within the score often, for $2 pick up Roman Molino Dunn’s Add Instrument Names To Staves. It can process multiple staves in a selection and can be a useful time-saver if you do this sort of thing often.

Learn how to do it in Finale

Now you know the ins and outs of instrument changes in Sibelius — but your next gig is in Finale! No sweat; head on over to the excellent blog of my colleague Robert Puff, and he’ll walk you through the steps to get similar results in that program.

In Sibelius it’s technically impossible to center a group name between two staves and also individually name each staff. Here's...

There are currently almost 200 additional plug-ins for Sibelius available for download from the Sibelius web site. They’re really an...