Occasionally when reviewing someone else’s score in Sibelius or Finale, I’ll notice that the user has incorrectly entered ties as slurs. While the two items may look similar, they are in fact different, and behave differently in notation software:

If you enter in a tie as a slur, not only will it look and behave differently in notation software, but it will play back incorrectly. My colleague Tom Rudolph has an excellent basic guide to entering ties and slurs in both Sibelius and Finale. These topics are also covered in Lessons 1 and 3 in Avid’s Get Started Fast with Sibelius 7.5 video tutorials.

What if this information came too late, and you’ve already entered in all your ties as slurs? Or what if you’re a copyist who has received such a file from somebody else? You’ll want Roman Molino Dunn’s $13 plug-in Locate Ties Entered As Slurs, available from his store, The Music Transcriber. Once you’ve installed the plug-in via the usual manual installation procedure, or with Bob Zawalich’s free plug-in Install New Plug-in, you can take a passage like this:

Run the plug-in with these settings: 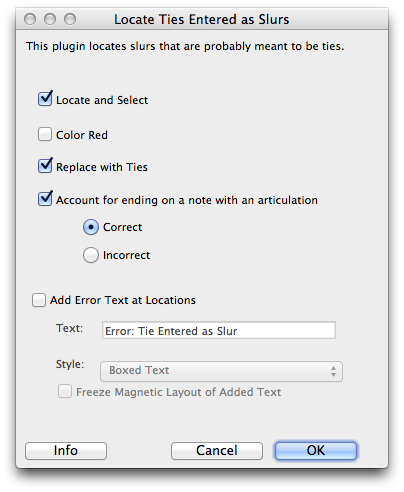 And get this result:

In Appearance > Engraving Rules > Ties 1 and Ties 2, under Ties Above/Below on Notehead Side, I’ve unchecked “Use on single notes”, which is why the difference is more noticeable than it otherwise might be. Notice how the plug-in is intelligent enough to account for slurs that occur between notes of the same pitch when articulations are present, and optionally leave them alone, like when a string player would play two separate notes of the same pitch with the same bow stroke.

Another of Roman’s handy plug-ins is Locate Slurs Ending On Ties, also $13. It is generally best practice in modern notation for a slur to encompass all ties notes until their last tied into note. If you’re working with a score in which the composer has entered the slur only up to the start of the tie, this plug-in will easily save you lots of work, like in this case:

Run the plug-in with these settings: 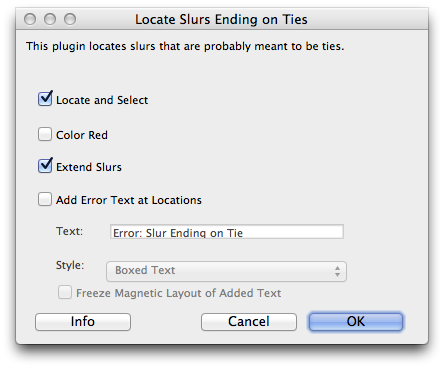 And get this result:

I recently used Locate Slurs Ending On Ties on a score with more than 700 such instances! Naturally, I used all that time I saved to more thoroughly enjoy life’s greater pleasures.

In thinking of ways to spend fewer hours in Sibelius adjusting slurs that encompass the opposite stem direction on outer...