Dorico’s separation of modes of working — Setup, Write, Engrave, Play, and Print — is unique among the various desktop music notation programs. It’s fundamental to the program’s design philosophy: “Modes in Dorico Pro represent a logical sequence of the workflow phases of preparing music, but you can switch between them at any time as required for your own workflow,” according to the documentation.

For example, if you’re used to just selecting an item and nudging it to change its position in another program, it’s a little different in Dorico. In Write mode: “By design, you cannot move notes and items graphically on the page in Write mode. Graphical adjustments are only possible in Engrave mode.”

And it’s vice versa in Engrave mode: “By design, you cannot delete any notes or items, change their rhythmic positions, or change the pitch of notes in Engrave mode; this prevents mistakes when engraving.”

Well, you’ll just have to get used to switching back and forth between the modes. That seems to be the end of this discussion… Or is it?

Buried a bit further in the reference is this nugget: “You can open multiple project windows for the same project, for example, if you want to work on multiple layouts at the same time. You can also show a different mode of the same project in each window, such as having one window show Write mode and another show Play mode.”

Hmm. Interesting! What if we open one window in Write mode and another in Engrave mode at the same time?

To open a new window for the same project, go to Window > New Window or press Ctrl/Cmd-Shift-T.

Of course, this works especially well if you have a large display or multiple displays: 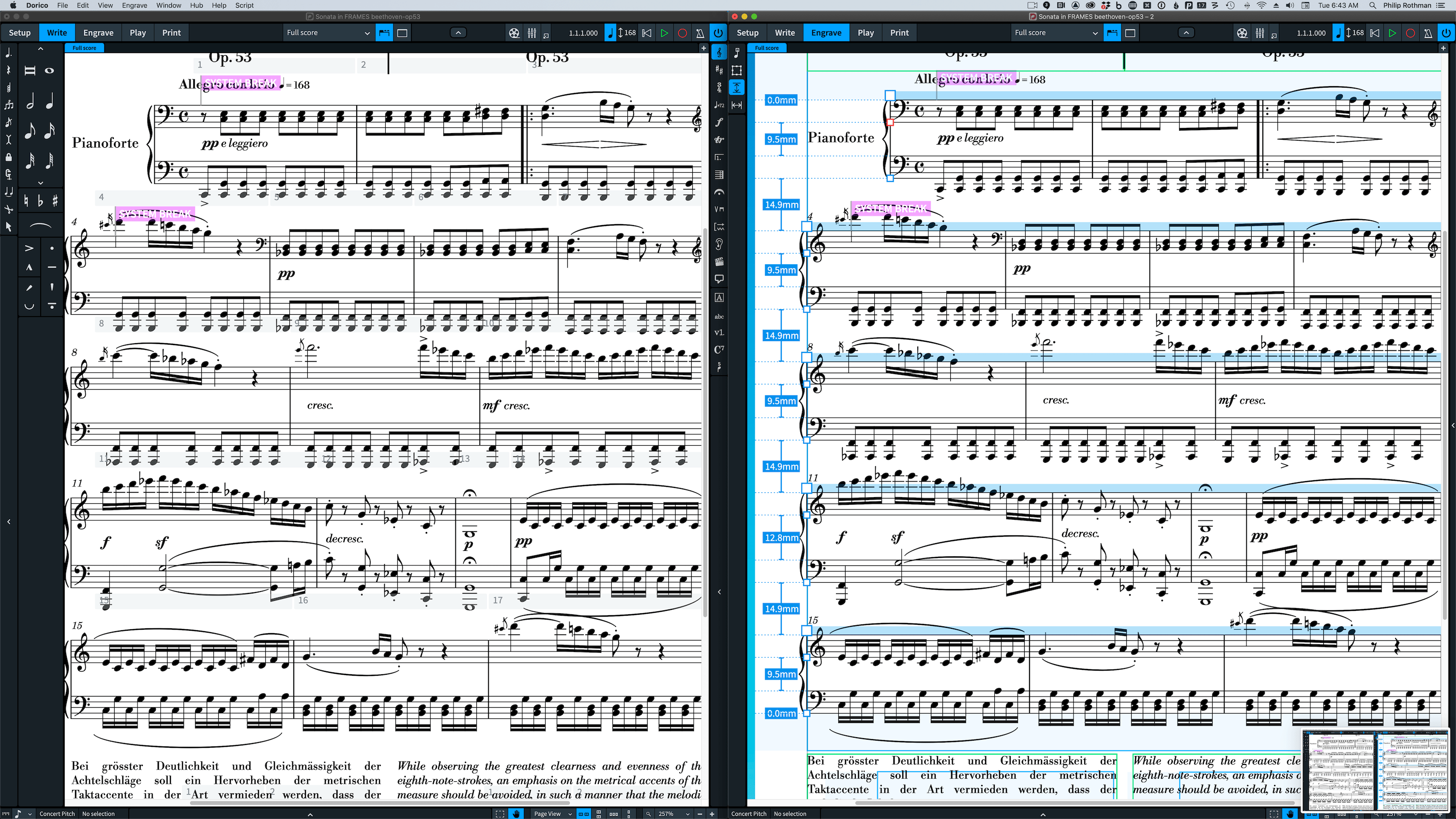 But we’ll demonstrate on this little slice. Notice how the top window is in Write mode and the bottom one is in Engrave mode, and the second window has a suffix of “2”.

Moving the dynamic expression in Write mode changes its rhythmic position, while moving it in Engrave mode is a fine adjustment, changing its position relative to the note to which it’s attached. Likewise, changing pitches is done in Write mode, while staff or note spacing adjustments are made in Engrave mode. In each case, the changes made in one window are instantly reflected in another, and there is no need to toggle between modes.

This manner of working may take some getting used to, but it can be quite useful if you develop a regular editing workflow.

“Hat tip” to Doug LeBow who suggested this topic to me at the NAMM Show a couple of months ago. Thanks, Doug!

Dorico for iPad has arrived. This major release for Apple’s tablet platform brings over all the familiar elements of the...

The first in our series exploring the major new features in Dorico 3, condensing is the process of combining the...

Today Steinberg announced details about Dorico, the music scoring software more than three years in the making. This post covers...