Many applications have some features that are used constantly, and others that, although accessed only once in a while, are tremendously useful. Falling into the latter category for me is Sibelius’s ability to compare two different scores, or versions of a score.

Versions were introduced in Sibelius 6, and you may be using Sibelius’s versioning feature whether or not you know it — it’s enabled by default in File > Preferences > Versions. If you don’t want Sibelius to automatically create a new version, uncheck Create a new version when closing the score in the dialog.

However, because each version is essentially a copy of the entire score stored within the same file as your existing score, your file can grow quickly if you have many such copies. (Read more here about how to reduce unwanted file bloat.)

What’s nice about Sibelius’s ability to compare scores (found in Sibelius 7 and higher at Review > Compare) is that you don’t need to be using Sibelius’s official versioning feature to compare two different iterations of the score. It works just as well on scores saved as separate files. Here’s how to do it.

For instance, say that you are a music preparer sending a proof of a score to a composer client for review. Rather than have him tediously write down all his requested changes, you agree that it would be faster and easier for him to make any changes directly in the file and send it back to you — but you still want to have a record of what changed, and where, so that you can do a final review.

(It’s worth noting that the changes that Sibelius compares are not of the formatting and layout variety; they are mostly note changes, missing dynamics, articulations and other musical content in the score.) 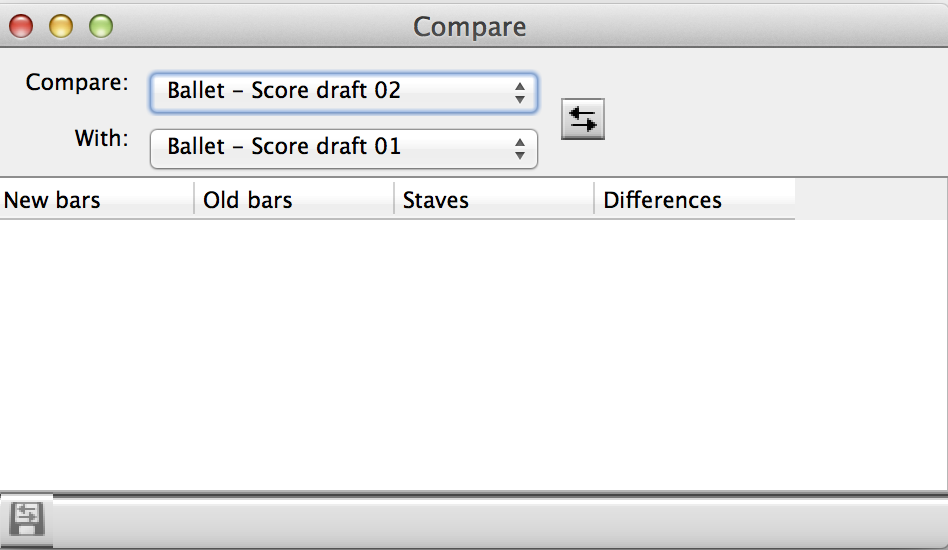 Upon clicking the little

button and waiting a few moments for the progress bar to complete, the two scores will be tiled on your screen, and you’ll receive a summary of the differences: 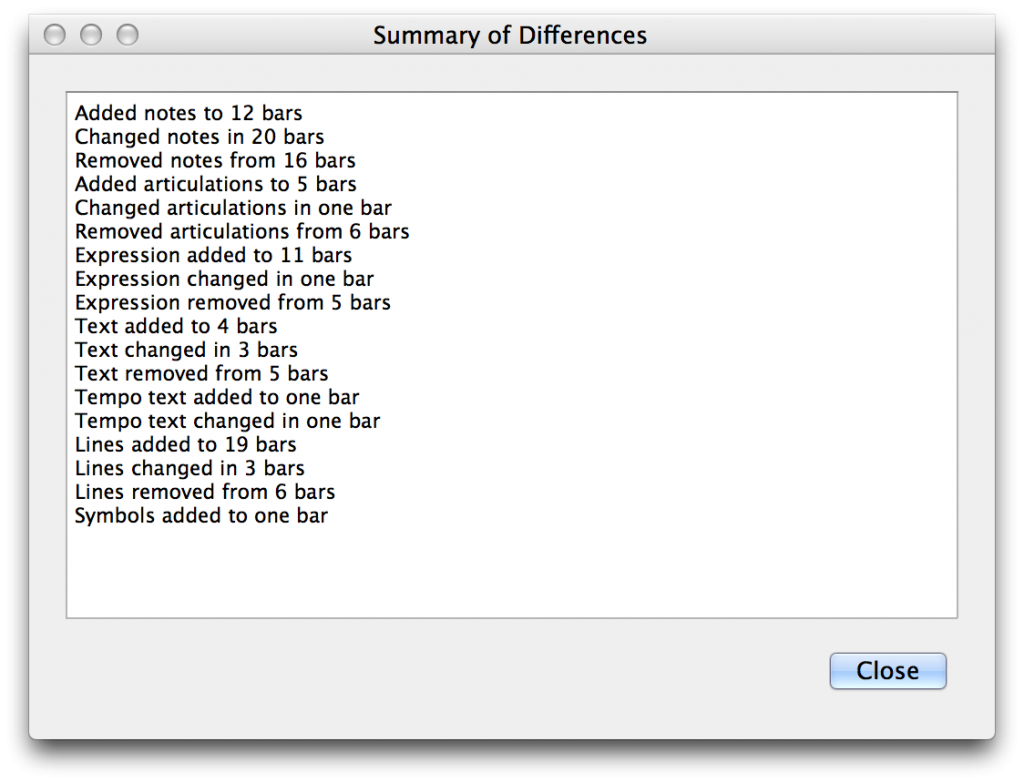 This is a nice overview, but to get into the details, close this window and look at the Compare window once again (it may end up being hidden behind your scores): 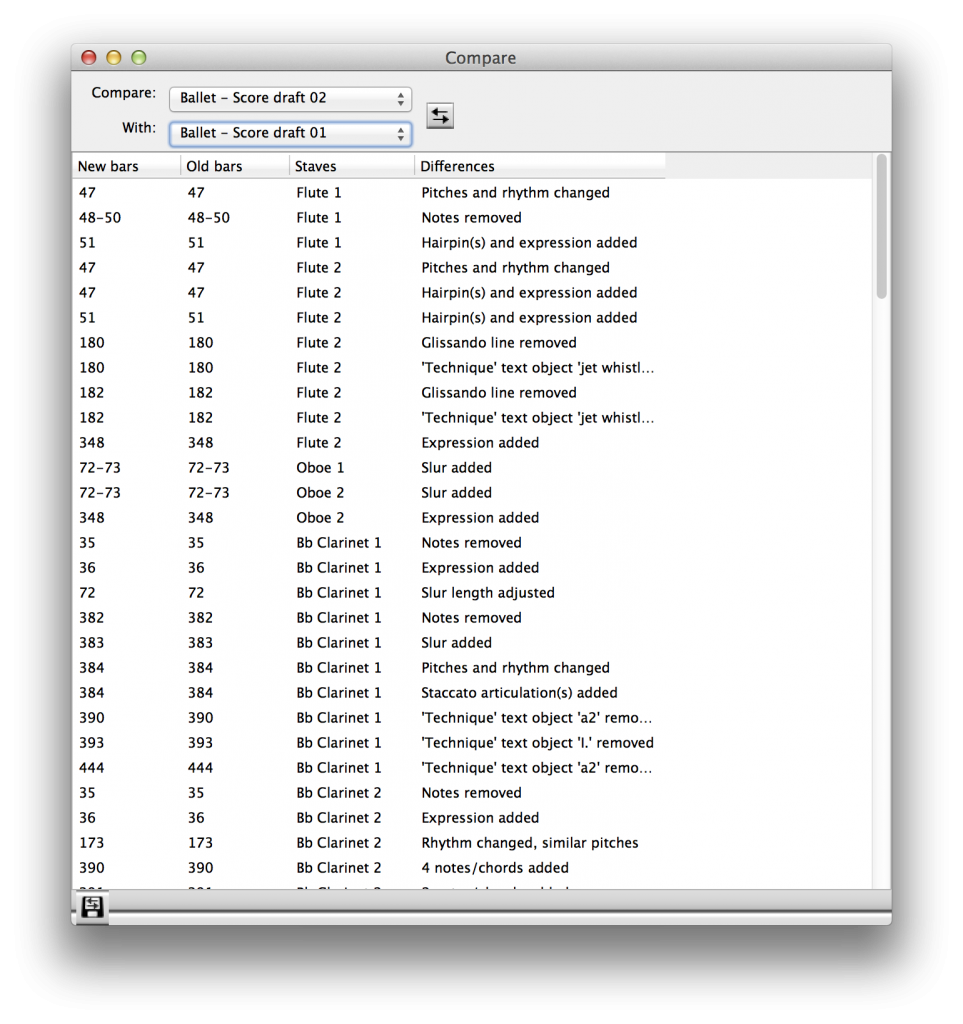 Simply double-click on any of the items to be taken directly to the corresponding spot in the scores to see the differences.

Sibelius takes account of whether objects have been added, changed or deleted, as follows:

What’s more, you can export the entire list of differences by clicking the little

icon in the lower left of the Compare window. The resulting file will be a Rich Text Format (.rtf) file. This can be useful, for instance, if you want to sort the changes by bar number instead of by instrument name (in a spreadsheet program), or if you just wish to keep a record of the changes somewhere.

When you’re done, you can click on Review > Compare to switch off the feature and get back to ordinary editing.

Sometimes it’s difficult to characterize the difference between versions, and so it should be said that this feature is different than, say, Microsoft Word’s Track Changes feature, which literally tracks every change to a document, who made it, and when. In contrast, Sibelius looks at the two versions and does its best to figure out the changes and itemizes them in a list.

Finally, don’t rely on this tool for your doctoral thesis if you want to have a detailed theoretical analysis of the differences between two entirely different pieces. If the differences are too great to be enumerated, Sibelius will tell you so and give up.

Still, when collaborating on a file, or even working alone and determining the evolution of a file, this is a feature that, when you need it, will be, uh, beyond compare.

If you work in Sibelius 8.5.1 and open files created in earlier Sibelius versions in which rests were manually moved...

Save a Sibelius file as both the current version and an earlier version of the software, along with PDF and...