When we see rehearsal marks in music, when they are enclosed, the vast majority of the time they are enclosed in a box. It’s the default setting for new Sibelius documents and it’s a reasonable one.

Less often we see a circle around rehearsal marks. Indeed, the Sibelius Reference warns us that “text in circles is rare in music (other than for specifying guitar strings), though it is occasionally used for bar numbers and even rehearsal marks.”

The Reference is dissuading you from using circled rehearsal marks for another reason: it’s impossible to get the circles to have a uniform diameter. This is especially evident in the difference among marks containing varying amounts of digits:

While contemplating a solution to this esoteric problem, I discovered a free font called Numberpile, designed by Ray Larabie of Typodermic Fonts. Ray told me that he made Numberpile because he saw a diagram and thought, “it looks like it would be a pain to put all those numbers in circles.” 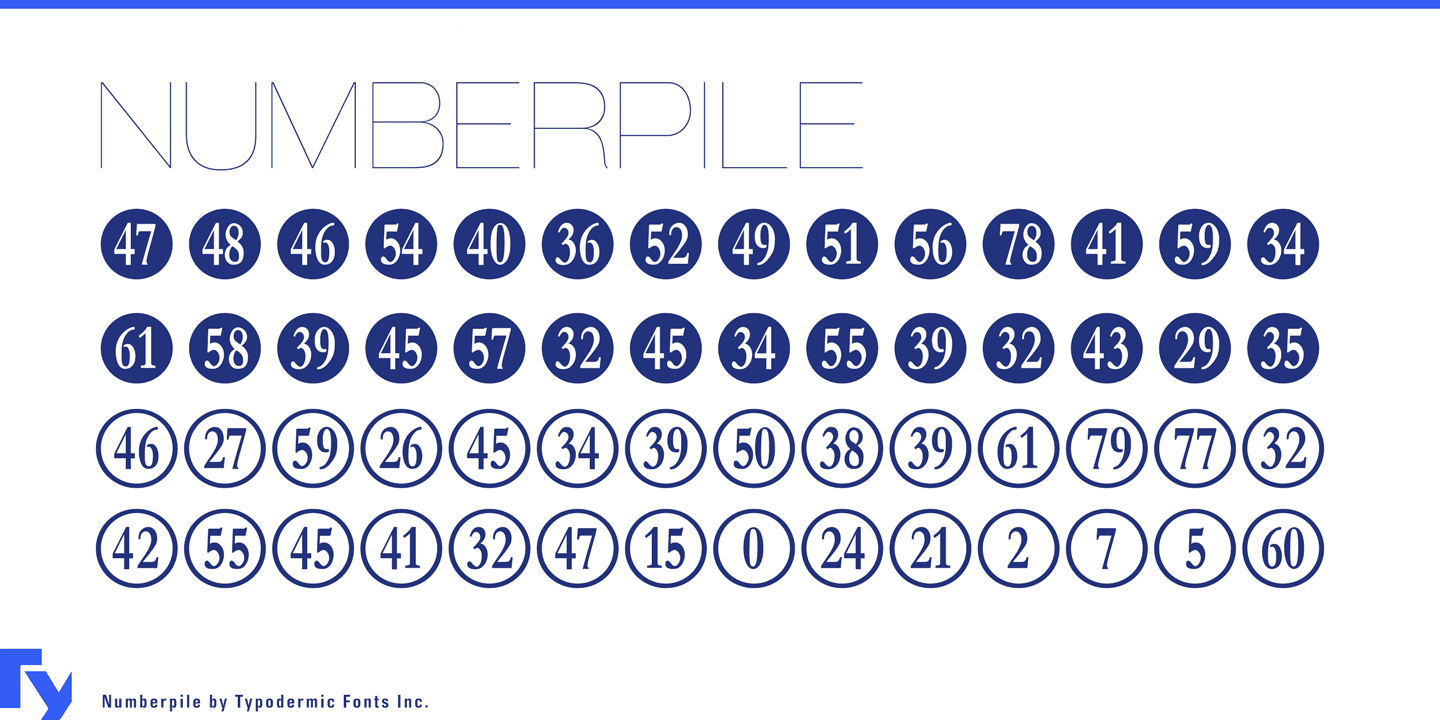 The font is described as follows:

Numberpile is a set of circled numerals: convenient for maps & diagrams. Numberpile includes a handy guide for accessing numbers directly. If your application supports OpenType standard ligatures, you can type circled numbers by surrounding them in parentheses. For example: typing (100) will convert automatically to a circled 100.

Very promising! The emphasis in the last sentence is mine, and it’s the key to making this work. Sibelius supports OpenType ligatures; for instance, it’s what Robin Walker utilized in his update to the free Norfolk music font to make nice-looking dynamics.

What if I could use this feature to create distinctive-looking rehearsal marks? I tried it, and it worked! Read on for instructions.

First, you’ll need to get the Numberpile font. It’s available at Notation Central, our marketplace for music notation technology. For most uses, the license is free, but be sure to read the terms carefully in case you’re using it for purposes which require a paid license.

Install the fonts on your computer in the usual way for Mac or PC. Quit Sibelius if it was running and restart it.

In the Font tab, under Basic Formats, be sure to check the Font box to enable the drop-down menu, and choose Numberpile fonts. In the Style menu, choose either Regular or Reversed. (I’ll choose Reversed for a more traditional look). You can always adjust the size of the font later to suit your score.

Next — and this is important — go to the Border tab and, under Shape, be sure that both Circled and Boxed are unchecked. Otherwise, Sibelius will draw an enclosure around the circle which is built into the font.

There’s one final step to get Sibelius and Numberpile to work their OpenType ligature magic. Go to Appearance > Engraving Rules and choose Rehearsal Marks. In Appearance, choose either 1,2,3… or Bar number depending on your preference (although if you’re using the Bar number option especially, you’ll need to know that Numberpile only goes up to 200).

Click OK to exit the dialog. Place the rehearsal marks in the usual way. Sibelius will automatically respect the ligature that is created every time you place a new rehearsal mark.

Of course, Numberpile’s use isn’t limited to rehearsal marks. You could use it to distinguish special sections or conductor cues, for instance. Because the enclosure is part of the font itself, you can include it in a single text object alongside other fonts.

For instance, you could type the following instruction in a normal text font, such as Times New Roman:

Highlight as shown, and change the numeral font by going to Text > Format and choosing Numberpile from the Font pop-up menu (choose Regular or Reversed from the Style pop-up menu).

For those that are interested, the concept of using parentheses or brackets to create an enclosed rehearsal mark is somewhat similar to the Reprise Rehearsal font that is included with Sibelius. In that font, square brackets are used as the prefix and suffix to create the enclosure. But Reprise Rehearsal actually has upper and lower borders baked into the characters in the font, and simply stitches all the characters together. Numberpile, on the other hand, uses ligatures to create a complete symbol.

Stay tuned — in my next post I’ll describe how to use Numbers with Rings, another font that Ray created that is more complex but opens up enormous possibilities with Sibelius enclosures — including numbers greater than 200 and letters. Meanwhile, enjoy the distinctive look that Numberpile can bring to your scores!

Numbers with Rings is a sophisticated font that can bring the beauty of many enclosure styles to your scores. Learn...

When a player has finished playing for the remainder of a piece, this is indicated "tacet al fine". Learn how...

A brief overview of Bob Zawalich's new plug-in, which can center rehearsal marks at the start of a system horizontally...