As a middle school band director, I often find myself working with scores in B♭ major in 4/4 time. Numerous times a semester I do the following:

A lot of this happens in the same simple key signatures and time signatures. Because Dorico does not provide me with all of the template options I need to set up these parameters, I spend a lot of time repeating setup steps each time I need one of these basic scores.

macOS Monterey recently shipped, and it comes with the Shortcuts app installed. The Shortcuts app started out as Workflow and was originally released for iOS as a mobile automation tool, drawing heavy influence from the Mac’s Automator application. Apple acquired Workflow in 2017, renamed it Shortcuts, and has been aggressively iterating on it every since.

(A note of caution: I have been testing macOS Monterey since July 2021, and while I have not had any issues with any professional notation software, not all of it is officially supported yet. Check this Scoring Notes blog post to keep up with the latest compatibility news.)

This year, Apple announced that Shortcuts is the future of automation on all their platforms, and I rejoiced. As someone who is a little out of their element when it comes to scripting languages, Shortcuts, with its easy drag-and-drop interface, makes creating automations easy.

When Shortcuts came to the Mac this week, Apple made numerous legacy actions from Automator available in Shortcuts, and these actions even became available on iOS.

Creative professional apps have been slower to adopt Shortcuts than the rich ecosystem of indie productivity apps available on the App Store.

Even though apps like Sibelius, Finale, and Dorico don’t come with their own built-in Shortcuts actions, the addition of several new file-based actions from the Automator makes creating templates possible.

The shortcut below is three simple steps. I searched for each action in the right sidebar and dragged them in the order I wanted them to occur. Here’s what each step does:

Because Shortcuts actions are consistent across all Apple’s platforms, the action works on both the Mac and iPad version of Dorico without any alterations. On iOS, the new file is created in the Desktop subfolder inside of iCloud Drive.

You can download the Shortcut, test it out, pick it apart, and adapt it to your own needs here:

You could easily select the blue highlighted variables and change where the template is stored, what app it will open in, and even add your own steps.

Adding steps is a breeze. Lets say, for example, I want to choose if the score is in 3/4 or 4/4 time. By adding a Choose from Menu action, I can have Shortcuts prompt me to select 3/4 or 4/4. Depending on which option I choose, you can see in the action below that Shortcuts creates a sort of if-then statement, graphically laid out in hierarchical blocks. 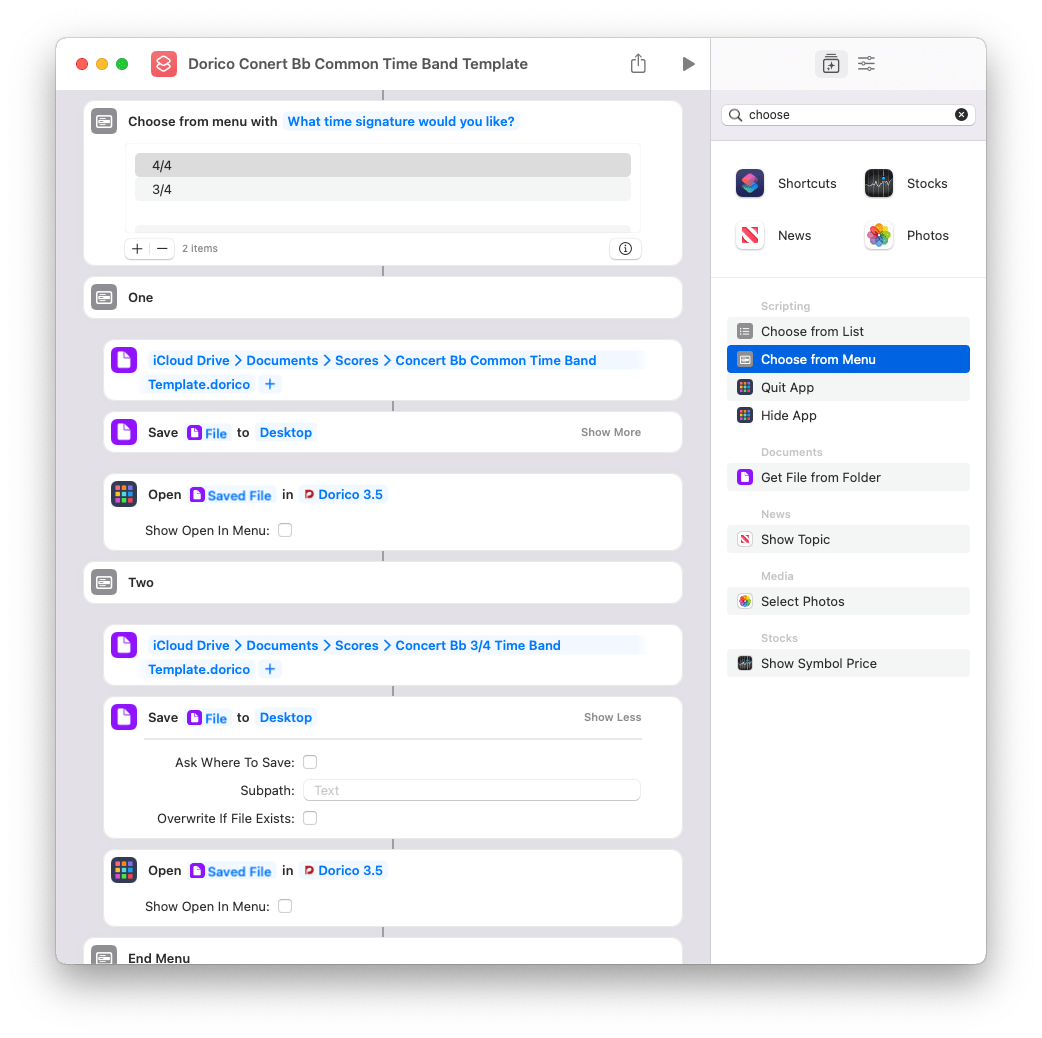 Shortcuts can be triggered by tapping on them in the Shortcuts app, but they can also be saved as tappable app icons to the home screen. On the Mac, they can be launched from Spotlight, the menubar, and be added straight to the dock. You can even launch them from a Stream Deck.

With support for macOS Automator actions, and support from more third party apps on the way, Shortcuts are becoming more open and flexible for music professionals to create their own custom workflows, not to mention super easy for users of all ability levels.

How are you using Shortcuts? Let us know in the comments.

There's nothing like a good run through the alphabet, from A to Z, and then some. Here's what pressing each...

Dorico for iPad has arrived. This major release for Apple’s tablet platform brings over all the familiar elements of the...