You probably know that Cmd-E or Ctrl+E are, respectively, the Mac and PC shortcuts to apply Expression text in Sibelius, and that Cmd-T or Ctrl+T apply Technique text. If not, now you know!

Further, you may very well know that, after typing the command for Expression text, with the cursor blinking, holding down Cmd (Mac) or Ctrl (PC) and then typing f, m, n, p, r, or s get you the dynamics in the stylized music font (Cmd-Opt-Shift-Z on Mac or Ctrl+Alt+Shift+Z on PC is for the z). If that’s news to you, check out this video on the subject.

Don’t believe me? Try this: with the cursor blinking, right-click (or Control-click on Mac) the screen to bring up the Expression contextual menu. There they are:

Note that you can, of course, click on any of these items to instantly apply them to the score.

Applying shortcuts to items in a word menu

That’s great, you say, but if only there were a way to really get on this shortcut bandwagon and use it for other text… well, there is! Read on…

Here, you can add words to each contextual menu, and apply shortcuts. To use, say, Cmd-Shift-A for “arco” in the Technique text menu, simply type that keystroke into the Shortcut box and click Apply.

You can use any shortcut you like, as long as the keystroke isn’t already used by your computer’s operating system. You can even use the same shortcut for two different word menus, like Cmd-Shift-D for “div.” in Technique words and for “dim.” in Expression words. And you may have noticed that using Cmd-Shift-A for “arco” poses no problem, even though Sibelius uses that same shortcut for Home > Select > More.

That’s because word menu shortcuts are only active when the cursor is blinking for that particular text style in which you happen to be working at the moment. (If you use Finale, the concept is kind of similar to Metatools: you can use S for a staccato in the Articulation Tool, and S for a slur in the Smart Shape Tool.)

With that concept in mind, here are a few more Technique shortcuts I’ve set up:

You can even create a whole new word menu and use it in a text style. Here I’ll use it to create a custom word menu for the characters in an opera, so I don’t have to re-type them every time the character enters a scene.

Then add items to your word menu, with shortcuts, as described earlier in this blog. Be sure to click Apply after adding each item and shortcut, or your changes won’t stick. Use the Move Up or Move Down buttons to control the order in which the items appear.

Next, set up a text style in Text > Styles > Edit Text Styles. I selected “Technique” and clicked New Text Style… to base my new next style on Technique text.

I named mine “Vocal part”. Set the properties of the style as you like, and in Other, choose your new word menu in the drop-down list: 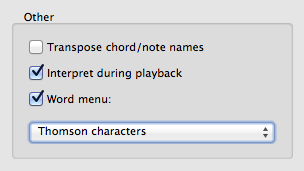 These shortcuts certainly come in handy when working on a large score with lots of markings. Have a few shortcuts you like to use? Let us know!

It's time for Scoring Notes Snacks, where we take music notation software topics and make them into bite-size portions. This...

Quickly apply a sudden dynamic change such as "ff sub." in Sibelius, Dorico, and Finale — and do it correctly.

Here are half a dozen useful keyboard shortcuts for Sibelius that you should add to your arsenal if they’re not...