It’s time to have the talk. You know, the one about octave-transposing clefs. Now that doesn’t sound so bad, does it?

Let’s start with this statement from the Sibelius Reference:

Some people write (say) piccolo with a normal treble clef, some with an “8” above (particularly in avant garde scores) – this is a matter of taste. A real-life piccolo playing music with a “treble 8” clef would not sound an octave higher than a piccolo playing the same music with a plain treble clef – they sound at exactly the same pitch. In other words, the “8” is just a hint or reminder to the reader that this is a transposing instrument.

Therefore in Sibelius clefs with or without “8s” (or “15s”) on them are all precisely equivalent. The fact that a piccolo sounds an octave higher than a flute playing the same notes is an attribute of the instrument, not of the clef (after all, they could both be playing from a plain treble clef). This is indicated in Sibelius by the fact that a piccolo has a transposition change by default, namely it transposes up an octave both in a non-transposing score and in a transposing score. You can create a transposing instrument like this yourself using Edit Instruments.

A tenor voice “instrument” in Sibelius is similar – it has a transposition change to make it transpose down an octave both in a non-transposing score and in a transposing score. The “treble 8” clef for a tenor is again just a hint to the reader – it’s an alternative to a plain treble clef and has no direct effect on the sounding pitch of the notes.

All clear, or all confused? Let’s set it up another way, by using this example straight from page 507 of Elaine Gould’s acclaimed notation reference book Behind Bars

(highly recommended to all readers of this blog):

Notice how I’ve placed the Piccolo instrument change on the second bar (indicated by the hidden rectangular box), and then a return to the Flute on the 3/4 bar. (This is done by selecting those bars and going to Home > Instruments > Change and selecting Piccolo from the list.) Then I placed the octave-up treble clef by pressing Q to bring up Notations > Common > Clef and selecting the appropriate clef. Placing the clef in the score had no effect on the music — it was the instrument change that was responsible for the transposition.

This is what is meant in the Sibelius Reference when it is stated that “The fact that a piccolo sounds an octave higher than a flute playing the same notes is an attribute of the instrument, not of the clef (after all, they could both be playing from a plain treble clef).” 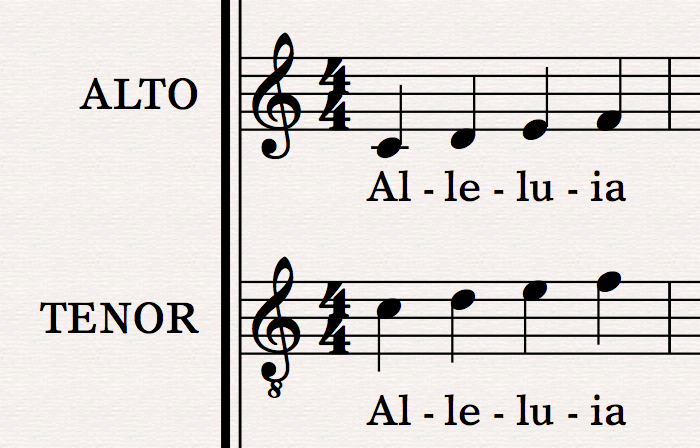 Nope. Again, it’s the instrument — in this case the tenor voice — that is causing the music to be transposed. You can see for yourself by selecting any bar on the tenor staff, and going to Home > Instruments > Edit Instruments. Be sure that Tenor is selected (it should be) and click Edit Instrument… (click Yes if you get an intervening warning pop-up).

This means that, should you prefer the tenors to read the music with an ordinary treble clef but still have the music transposed an octave above its sounding pitch, you would simply have to replace the clef at the beginning of your score without anything further needing to be done.

Those users accustomed to working in Finale or MuseScore will find Sibelius’s behavior different and disorienting at first, because in those programs, the octave-transposing clefs do actually transpose the music. Likewise, if you usually work in Sibelius but need to work in another program, you’ll need to be aware of this difference.

Now that you know how octave-transposing clefs behave in Sibelius, they really aren’t so mysterious, are they?

P.S. If you look closely, the music examples in this post were set using the new Norfolk music font that we at NYC Music Services developed expressly for Sibelius. Get it for free now.

MakeMusic is seeking beta testers for its free Dolet 8 plug-in for Sibelius. Although Sibelius has its own built-in MusicXML...

Finale comes with eighteen standard default clefs. If you need something beyond the standard assortment, you can modify any of...