There are currently almost 200 additional plug-ins for Sibelius available for download from the Sibelius web site. They’re really an incredible resource, and if you’ve never taken the time to have a look at the plug-ins on offer there, you’re strongly recommended to do so. Just about all of those plug-ins have been contributed to the user community by Sibelius users, and there are some absolute gems among them.

Fortunately, that most prolific of Sibelius plug-in developers, Bob Zawalich, has written a plug-in that makes editing instrument names in a large score an absolute snap. It’s called Edit Instrument Names, and it has saved me probably over an hour over the past day. Pretty cool! 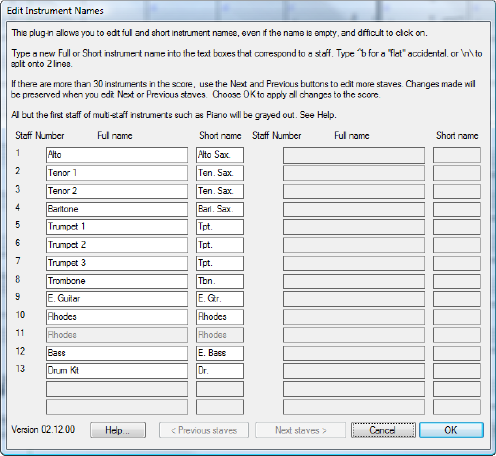 When you run the plug-in, you’ll see the dialog above, which shows the long and short instrument names of up to 30 staves in a single dialog — much quicker to tab around this dialog than to double-click each instrument name in the score in turn. If your score happens to have more than 30 staves, no worries: the Previous staves and Next staves buttons at the bottom of the dialog enable, and you can flip to another page of the score with those extra staves listed.

It’s a very neat plug-in, and it could save you as much time as it saved me. Go download it now! (And if you don’t know how to install a new plug-in, read this.)

If instrument names don't appear correctly in the score, how will anyone know what to play? Learn how to get...

Two Sibelius plug-ins to make your life easier: Merge To Voice 1 to convert notes in all voices in a...