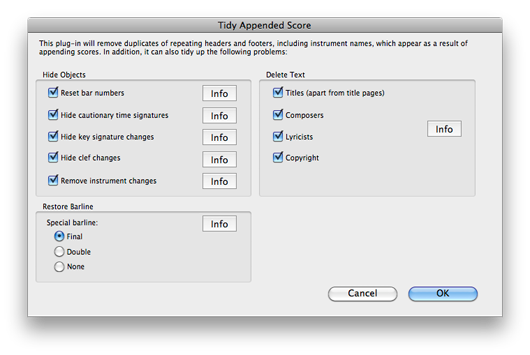 Being able to append one score to another is very handy when constructing, for example, a song book, or a symphony or an opera in which each movement or act has been prepared in a separate file. Appending one score to another in Sibelius is very simple: first, make sure that the score you’re appending has the same number of staves (and preferably, but not necessarily, the same instrumentation) as the score to which you are appending it; then second, choose File > Append Score to append the two scores together.

However, there are a number of edits that you might want to make after appending two scores together. For example, if the time signature or key signature of the appended score is different to the original score, you may have to deal with the cautionary time signature and the key change created at the end of the previous movement (also resulting in a double barline being created there rather than the customary final barline). In some circumstances (e.g. a new movement or song), you may also want to make sure that the bar numbers start counting from 1 again in your new movement.

Each of these edits is the work of but a moment, but why do the work when you could use a handy plug-in to do it for you? Fortunately, Neil Sands has created just such a plug-in, called Tidy Appended Scores. (If you’ve never downloaded or installed a plug-in before, see this page.)

To use this plug-in, first append the scores together, then run the plug-in, and choose the additional items you want to hide or delete in the dialog that appears. Help text is provided for each type of item.