The latest project in the ongoing effort to produce new editions of Aaron Copland’s music is his Three Latin American Sketches, a new edition of which I’ve recently completed in coordination with The Aaron Copland Fund for Music and Boosey & Hawkes.

Copland himself described the Sketches to Vivian Perlis as snappy and sizzling, and they originated in 1949 as Two Mexican Pieces. Copland later added a third piece — which is actually the first movement — in 1971.

In a review of the Grammy-nominated recording by Leonard Slatkin and the Detroit Symphony, Andrew Farach-Colton wrote in Gramophone: “Why we never hear the delightful Three Latin American Sketches is a mystery.”

I have a hunch why that may be. The parts leave much to be desired. While subpar materials won’t deter the Slatkins of the music world, they may give pause to other ensembles with limited time to learn and rehearse an unfamiliar piece, even by a composer as iconic as Aaron Copland.

A few people have remarked on the “charm” of these parts, but unlike a composer’s manuscript, which may have musicological value in spite of legibility, the only charm these parts bring are in overtime payments to players, which may be needed as questions extend rehearsals beyond their allotted duration.

Aside from the improvement in readability that an engraved part will bring, here are three other improvements that should not be overlooked:

The old edition had rehearsal marks every 10 bars no matter what. Copland numbered his manuscript this way, and the copyists faithfully transferred them over, despite having no value for performers. Indeed, in Elaine Gould’s book Behind Bars, she says, “To number every five or ten bars gives these bars an apparent significance that they do not have, and should be avoided.”

In the new edition, we place bar numbers at the beginning of each system and the ranges underneath multirests. We’ve added rehearsal marks that correspond with musical significance and will thus be likely starting points for rehearsal.

It should go without saying that cues are important in preparing parts when a player has been resting for a while. Don’t overlook the beginning of a piece or movement, especially if it’s not clear when the first entry is.

In this case, Copland wrote a full bar rest, but the first note of the piece is not played until beat 4. This is sure to require explanation in rehearsal even with a cue, but it won’t hurt to have it “in the ink” as a reminder.

This “Flute” part is actually a doubling Flute and Piccolo part, but the original part only listed Flute. The Piccolo doesn’t appear until midway through the third movement, but it still needs to be listed at the beginning of the part. If a player grabbed this part quickly and left their piccolo at home, they’d either be out of luck or have some serious overblowing to do.

The same goes for percussion instruments — be sure to list them all at the beginning of a part.

In the time between drafting this post and publishing it, I was saddened to learn of the death of Vivian Perlis. Vivian was the founder and former director of the Yale University Oral History of American Music. She died on July 4, 2019, in Weston, Connecticut.

Among Vivian’s legendary achievements were more than 3,000 recordings of interviews of iconic American composers, including Aaron Copland, with whom she co-authored two books: Copland: 1900 Through 1942, and Copland Since 1943.

I was very fortunate to get to know Vivian over the last decade through my work with the Copland Fund (of which she was a founding director) as we began work on these new editions of Copland’s music. I leaned on her particularly heavily when creating the new edition of his Clarinet Concerto. Vivian provided extensive notes to the new edition, and in corresponding with her about them, she told me, “I have not had directive re: length so I have opted for the short side, not mentioning tangential matters, such as Robbins Pied Piper, the fracas in the UK over Stolzman’s extreme freedom with the cadenza, Koussevitzky’s request to AC to present only the first movement at Tanglewood, Neidich, the Copland Collection at LC, the published arrangement for clarinet and piano.”

It was incredible that this treasure trove of history was at Vivian’s instant disposal. While we are lucky that she has documented much of it, there will not be a substitute for the pleasure of discussing it directly with her.

Vivian was such a genuinely warm and caring individual. She was more than happy not only to share her knowledge, but also the credit. In the draft of the preface to the new edition of the Clarinet Concerto, I had originally listed her as its sole author. My only contribution to those notes was detailing the location of the ossias. Upon seeing only her name credited, she wrote to me and said, “Will you share credit with me for the clarinet concerto note? It seems only fair to me! After all, the locations of the ossias may be the most useful part of the preface.” So generous of her.

Around that same time in 2013 she published a compilation of the Copland volumes with an addendum under the title The Complete Copland. I purchased a copy of the book, and when my my wife Jake Lipman and I visited Vivian at her home that summer, I asked her to sign it. She laughed when I said I had bought a copy and said that she would have gladly given me one! But she was more than happy to inscribe it to us. I will cherish that memento from Vivian, our visits, and her invaluable contributions to music. 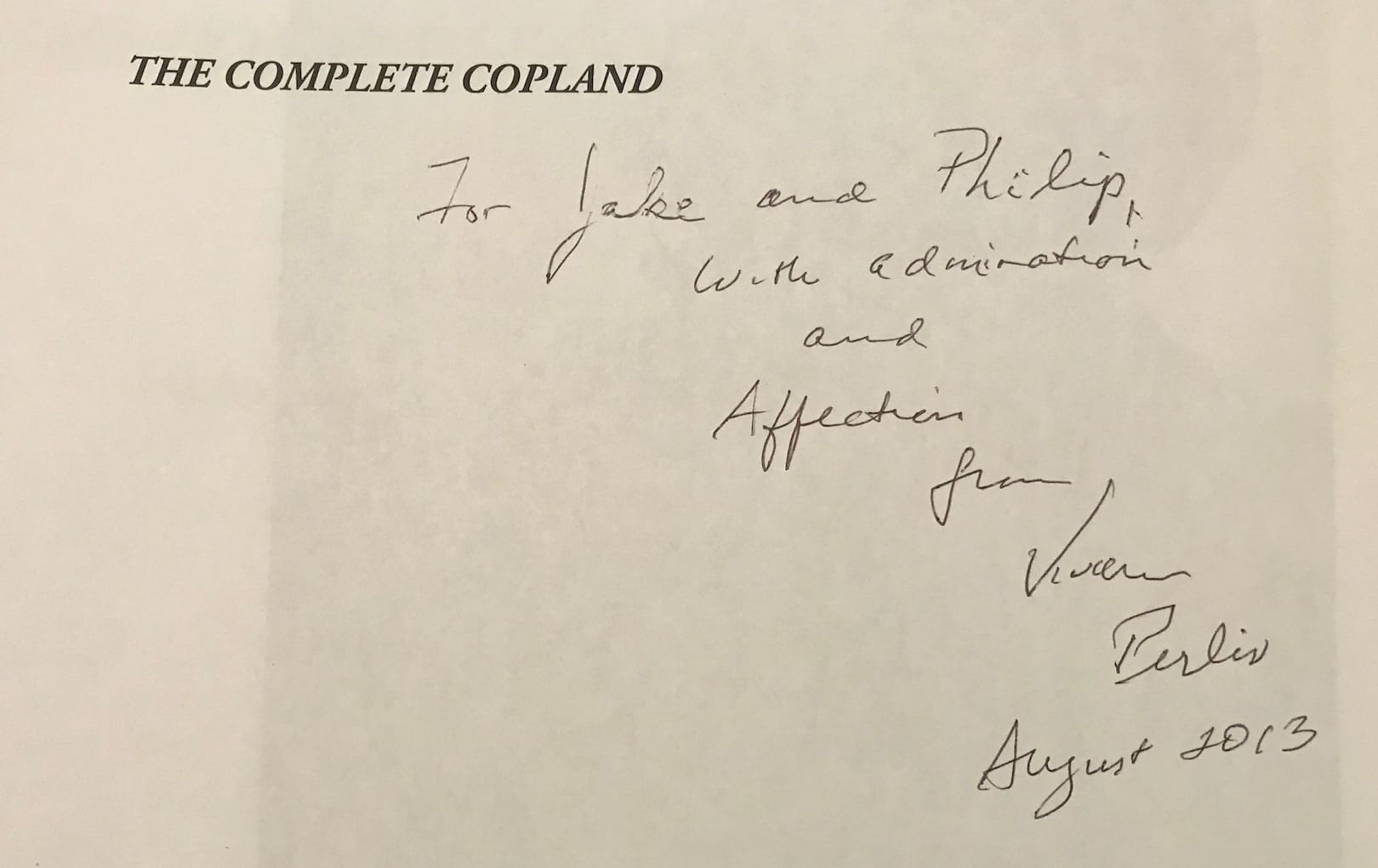 When Aaron Copland thought of the Far West, he probably didn't have Wisconsin in mind, but Milwaukee was the perfect...