When Sibelius 7.5 was first announced last year, the Timeline received top billing out of all of that product’s new features with its score navigation capabilities. Less noticed, perhaps, but vital to an important set of Sibelius users was a subsequent update to Sibelius 7.5.1 that added support for the open-source screen reader, NVDA. To quote the NVAccess web page, “NVDA (NonVisual Desktop Access) is a free ‘screen reader’ which enables blind and vision impaired people to use computers. It reads the text on the screen in a computerized voice. You can control what is read to you by moving the cursor to the relevant area of text with a mouse or the arrows on your keyboard.”

Because the Timeline and certain other Sibelius features are not accessible to NVDA, plug-in developer Bob Zawalich, the Sibelius development team, and Sibelius users Kevin Gibbs and Gordon Kent set about creating tools that would take advantage of Sibelius 7.5.1’s new ability to access the screen reader. You can read more about the process in a blog post that Kevin Gibbs wrote for Avid, and download the accessibility tools from Avid’s Knowledge Base.

The result was a series of plug-ins available in a new Sight-impaired category that can be downloaded from the Sibelius plug-in page or directly through Sibelius 7.5.1 by going to File > Plug-ins > Install Plug-ins > Sight-impaired. A side benefit of these new plug-ins is that some of their features are useful for sighted users as well.

One such plug-in is called There It Is!. As you might expect, it searches objects in a selection and tells the user precisely where each of those objects is located. A View button can be used to browse to objects without taking the dialog down, a feature that is probably only helpful for sighted users. If you’ve ever used Bob’s plug-in What Is Where?, There It Is! is similar, but with navigation capabilities.

The plug-in can detect an incredible number of objects — including many more than are available in the Timeline — and there are options to skip ones that can be slow to gather, like notes, rests, slurs, and bar rests.

As an example of one of the many uses of this plug-in, I wanted to find all the instrument changes in my score to look for any anomalies. There It Is! dutifully complied: 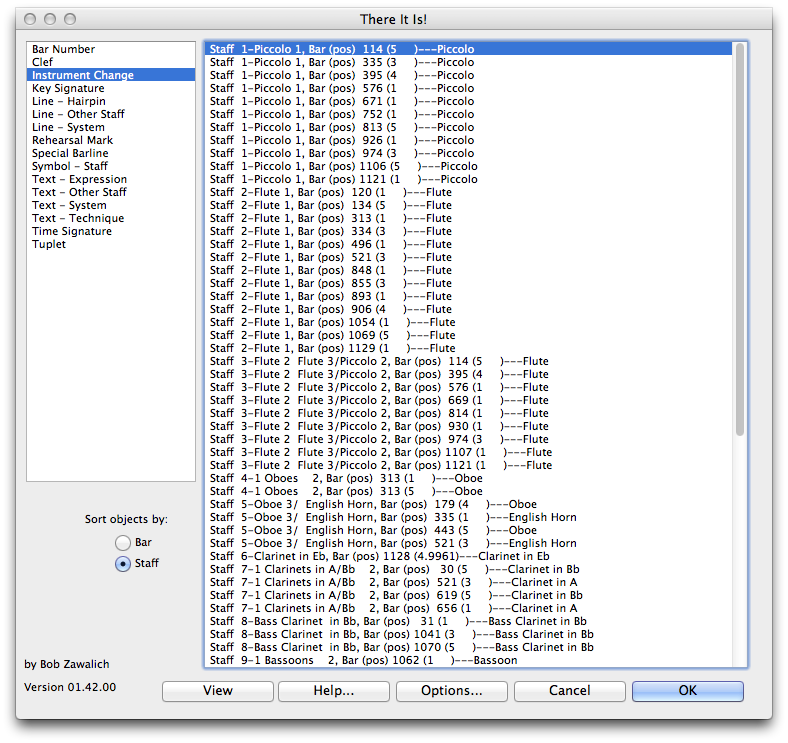 When an object type is chosen, another list is filled with the objects of that type present in the selection, with their staff, bar, and position in bar locations noted. Choosing OK will select the object, and bring the selected object on screen.

There It Is! is a valuable tool for vision-impaired and sighted users alike. Congratulations to the Sibelius team, Bob, Kevin, and Gordon for collaborating on this and other tools that improve usability for as many people as possible.

We have always tried to make Sibelius as accessible as possible for users with disabilities or impairments. Mostly this has...