This makes it quite easy to create passages like this, which will play back correctly and appear properly at the end of systems, with the ties continuing on the next system.

Run the plug-in to get (mostly) automatic results

Simply running the plug-in will return nearly usable results. A few things may need to be adjusted manually.

Here is the manual process that is being automated by the plug-in (the idea to replace tied notes in this manner comes from Philip Rothman): 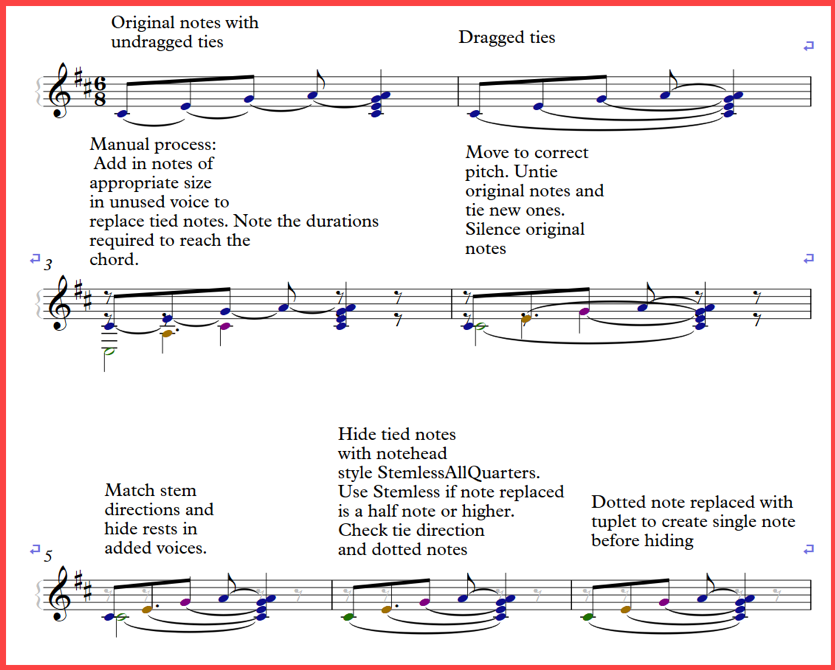 To hide notes correctly, you want the replacement note to be a single undotted note. Sometimes the duration of the replacement note will be dotted, or a pair of tied undotted notes, which cannot be hidden by replacing the notehead style. The plug-in can convert such notes to single notes in a tuplet, and the tuplet can be hidden. (See this Of Note blog post for details on hiding such notes).

How voices are chosen

When the plug-in has a pair of tied notes to replace, it needs to know what is in the bar, the duration of the replacement note, and which voices have been used in the bar. It looks at all the notes in the bar to see which notes start at or later than where the new note will start, and end before or at the end of the new note.

In the example above, assume that the half note C in voice 3 is present when the dotted quarter note E is being added. Voices 1 and 3 are not available, but voices 2 and 4 are. Voice 4 was chosen, and when the G came, only voice 2 was available, so it was used. At this point no other voices are available for this bar, since there can only be 4 voices present in a single bar.

The plug-in has rules for deciding which voices to use for each original voice, and for voice 1 the replacement order is 3, then 4, then 2. So the C got voice 3, the E got voice 4, and the G got voice 2. The rules try to match 1 and 3, and 2 and 4, and after that the order choice is arbitrary.

In the case of a chord, there is an optimization when there were several notes that had ties to the same location. It would normally look like this, which uses up all the voices for the bar: 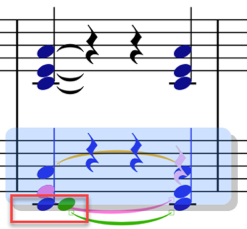 In this example, all the tied notes are be set to voice 3, which both saves voices and avoids some offset problems. 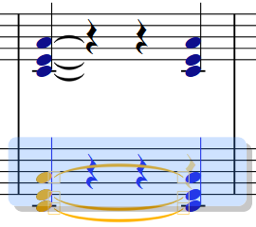 When you run the plug-in you may find that you need to flip some ties and do some other mild editing. If you are changing the result later you may find it easier to delete everything (or maybe filter the original notes and copy them somewhere else, then delete) rather than editing the existing notes, because it can be quite complex. The plug-ins There It Is! or What Is Where? can give some insight as to what you are actually looking at.

Here is an example of converted notes, and how they look when everything is unhidden:

For extra credit, here is the unpacking of the special tuplet: 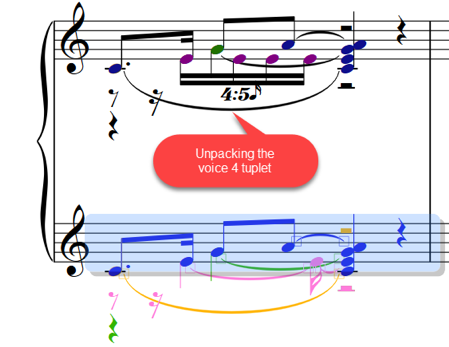 The data file and special noteheads

This plug-in uses a special notehead, which is stemless, and which uses the black quarter note symbol for all durations so that unison notes will usually overlap seamlessly. A plug-in cannot create a custom notehead style, and importing house style with a notehead style definition often changes more things that are desired, so if the plug-in finds that the notehead style is not defined it the current score it opens a score that contains noteheads with the custom style StemlessAllQuarters, copies a note into your current score, and then deletes the copied note. This leaves the notehead definition in the current score.

This will only happen once per score, and when it happens you will see a score quickly appear on the screen, and then close.

After the score closes, you may find that some of the Ribbon tabs are grayed out. This is a Sibelius bug, and the workaround is to go to the File tab, then return to the original tab.

The Tie Extended Stable plug-in is found in the Notes and Rests category and can be downloaded from File > Plug-ins > Install Plug-ins. Both the plug-in and data file will be installed automatically in the correct location on your computer.

Bob Zawalich, Sibelius guru and plug-in developer extraordinaire, gives us a personal tour of how many new and updated plug-ins...

A Sibelius plug-in can replace dangling ties with slurs, for use in scores where someone has mistakenly entered slurs as...

Learn about the differences between slurs and ties, and use a couple of convenient plug-ins to convert any ties incorrectly...