What is the distance between two lines on a staff?

If you’re thinking in millimeters, inches, or points, think again. The distance between two lines is always one space.

But it’s the space as a unit of measurement that defines the appearance of all other notational items. Everything can be measured as it relates to the space. It’s so essential that it’s the very first item mentioned by Elaine Gould in her music notation reference Behind Bars, and it can be scaled regardless of the absolute size of the music. 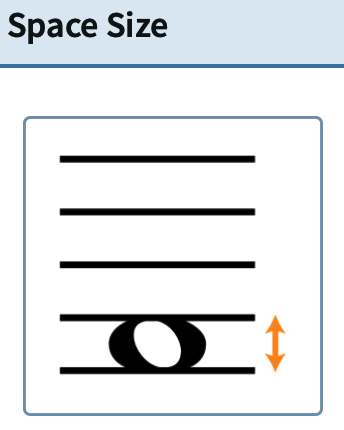 Yet even if you’re an experienced musician, if you’ve never prepared notation music you’ve probably not given much thought to the idea. When you start working with music notation software it might be puzzling to poke around in your program’s settings and see “0.0918” or “1/8 spaces”. But these basic settings matter as much as anything to affect how your music appears.

Can’t we all just get along? These differences are what gives default Finale documents a delicate look and it’s what makes Dorico scores look robust.

Although Gould says, “Stems should be thinner than the stave-line, but not so thin as to reproduce too faintly,” often the thickness of the stem and the staff line are identical. Here, again, the programs vary among each other, but hew closely or identically to the staff line thickness:

When it comes to barline thickness, Gould takes a firmer stance. “The barline is thicker than a stave-line, and therefore conspicuously thicker than a stem. It is very important that barlines stand out from stems, especially when there are long, complicated bars in a single-stave instrumental part.”

The results from a Finale default document, therefore, are unsatisfactory, where barline thickness measures the same as staff lines and stems. Sibelius and Dorico fare better:

Practically speaking, these settings result in the appearance of the music notation in the following way:

All of the above settings can be customized to your liking, of course. Here’s where they can be found:

Now that you know what a space is, you’ll notice these settings all across your document. The optimal settings for every item are a matter of taste and style, but legibility should always be paramount.

You might ask, though, what about units such as inches, millimeters, and points? These settings, which all refer to absolute measurements, also appear in documents.

Let’s take the first two. Generally, you’d use inches or millimeters (depending upon your localization) to refer to page layout items, such as the page size, page margins, and staff margins.

Most crucially, of course, you’ll also use this to define the height of your staff.

In Finale, these settings are found in Document > Page Format: 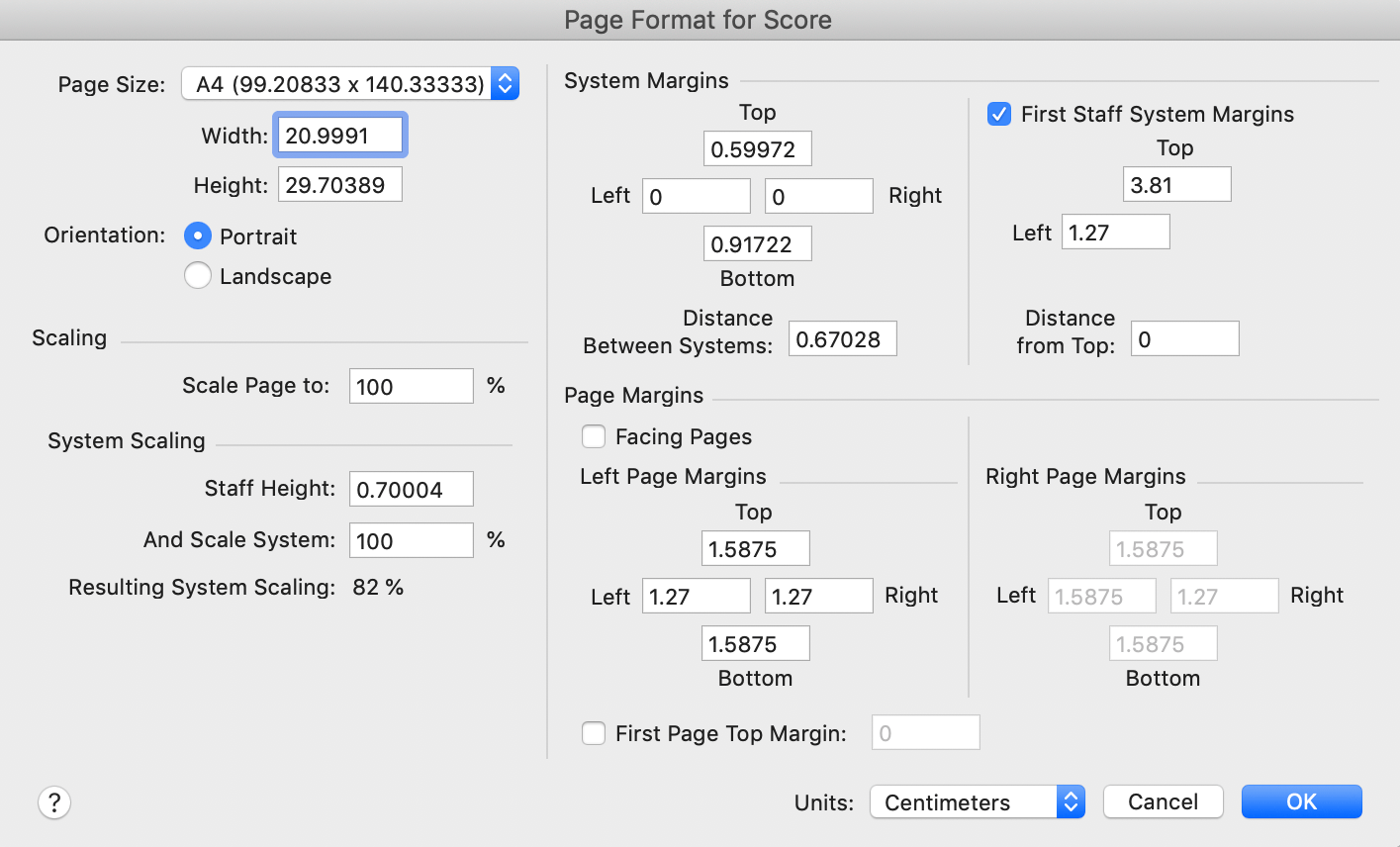 In Sibelius, in Layout > Document Setup: 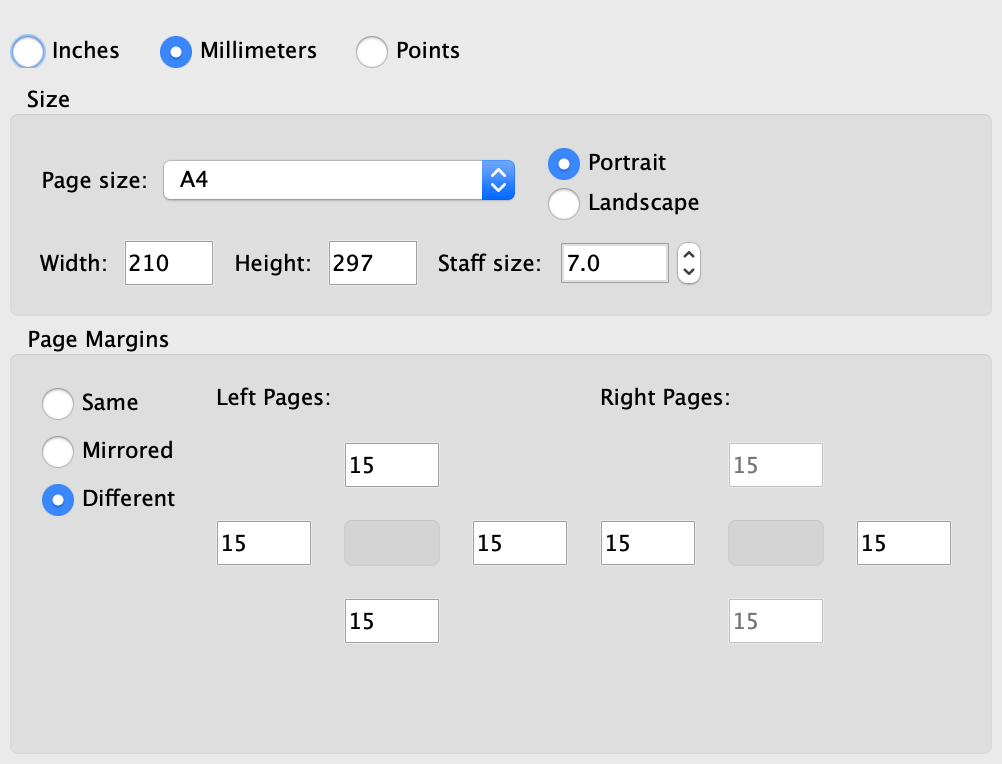 And as shown here in Dorico, in Setup > Layout Options > Page Setup. 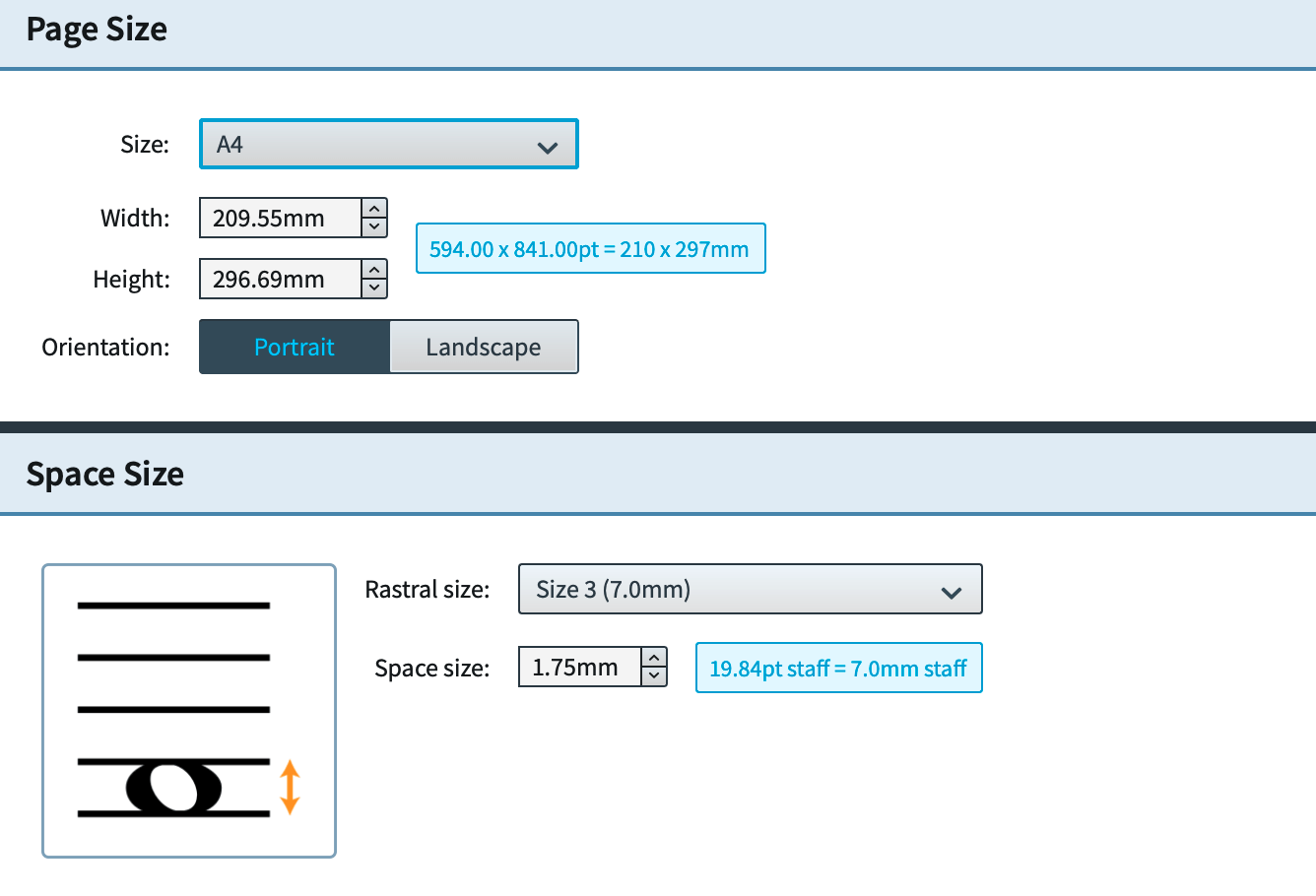 Points are a little different. Points generally refer to the size of text, defined as 1/72 of an inch (about 0.353 mm). You see this all the time in word processing programs and many other applications, including the notation programs.

Points are technically an absolute unit of measurement, but in all of the notation programs, you have the option to define text size as either an absolute (fixed) size, or relative to the size of the staff. Absolute sizes are generally better for titles, page headers, and page numbers, while relative sizes are generally better for staff text. System text (such as tempos and rehearsal marks) can be either absolute or relative, depending on your situation. You don’t want to scale those items to be so small in a conductor score as to be unreadable, but it’s often helpful for those items to bear some relationship to the musical elements.

The question is, though, if you choose relative sizes, to what setting is the size relative?

Behind the scenes, each of their programs have their baseline staff sizes. In Sibelius it’s 7.0 mm…

What does this mean for you? It means that at those staff sizes, the absolute size of your text will equal the relative size. In other words, 10 pt relative text will appear legitimately as 10 points, if applied to a Finale staff at 8.47 mm, a Sibelius staff staff at 7.0 mm, or a Dorico staff at approximately 7.05 mm.

However, if you have a Finale staff at 7.0 mm, 10 pt relative text will appear smaller, at about 8.3 pt, or only about 83% of the size it would appear in Sibelius or Dorico, because Finale’s baseline staff is larger.

Be aware in Finale

If all of that seems a bit confusing, well, here’s a bit more.

Sibelius and Dorico do a good job of keeping spaces, inches, millimeters, and points in their proper places.

In Finale, though, you might have noticed that you can set your default measurement units to any one of these, in the Finale menu:

The problem is, saying that a stem has a thickness of 0.00765 inches is meaningless, unless you only use a staff size of 1/3 inch (Finale’s baseline). You should always think in terms of spaces for notational elements.

Fortunately, you can choose a different unit of measurement in certain dialogs, like here, in Document Options, as seen at the bottom (Units:)

Power tip: You don’t even have to change the unit of measurement to enter spaces. Simply type s after the number and Finale will process your entry as spaces. (The same works for i for inches or m for millimeters.)

With all of this information now at your disposal, we’ll meter our thoughts and inch away to give you space to create some beautiful-looking music.

Ambitus is a font that can be used to quickly create musical hints, like vocal ranges or initial pitches of...

Tone clusters are a shorthand notation for several adjacent notes played at once. In this comprehensive post, we'll discuss many...