In our ever-expanding internet, bandwidth and storage can appear to be limitless. But if you have a slow connection or are paying for data by the megabyte, size matters.

Fortunately, Sibelius files are fairly compact: on the small end, a nine-page piano-vocal score that I recently worked on, of about four minutes in duration, was a mere 75 KB. Even large files, like a 62-minute first act of an opera full score, 252 pages in length, including a full set of 28 dynamic parts was only 2.2 MB.

So when I recently received a 35-page score for 5 players that weighed in at 5.7 MB, I knew that was an anomaly.

If your files are similarly bloated, the culprit is almost certainly having many versions of the score embedded in the file.

Versions, if you aren’t aware, are part of the Review tab in Sibelius 7 and 7.5. Versions are a convenient way of saving drafts of your work as you make progress in a score, in case you decide later to restore something you had changed earlier in your process. However, because each version is essentially a copy of the entire score stored within the same file as your existing score, your file can grow quickly if you have many such copies.

You can check to see if this is the case by going to File > Preferences > Versions. If you don’t want Sibelius to automatically create a new version, uncheck Create a new version when closing the score in the dialog: 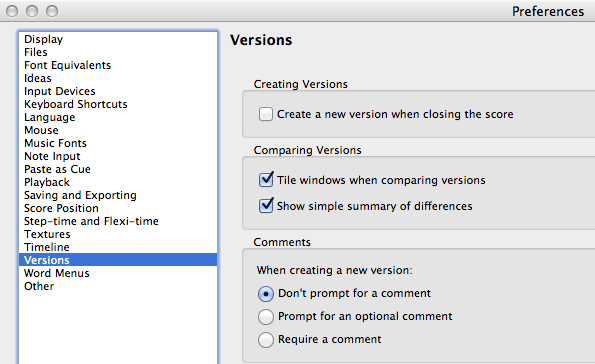 This only affects subsequent behavior; it won’t affect any existing files. So, now what to do with all of those versions in your existing score?

Go to Review > Versions > Edit Versions. You’ll see a list of all the versions in your file. The above-referenced 5.7 MB file had 38 previous versions! 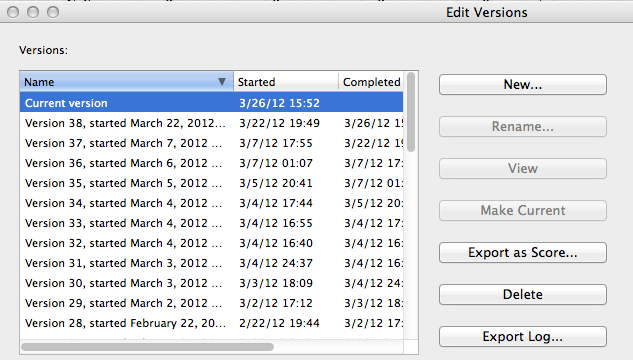 I deleted all of them by clicking on Version 38, scrolling down to Version 1, and Shift-clicking that version to highlight all of them. I then clicked Delete, and clicked Yes, I was sure. You could also delete them one-by-one, or Command-click (Mac) or Ctrl+click (PC) to cherry-pick only the versions you wish to delete.

The other way you can slim down your files is to get rid of any unnecessary parts in your file. By default, Sibelius creates a set of Dynamic Parts for each score created. But if you don’t plan on working with parts in your file, or if there are extra parts you don’t need, go to Parts > Delete Part. Select the parts you wish to delete, and click OK. 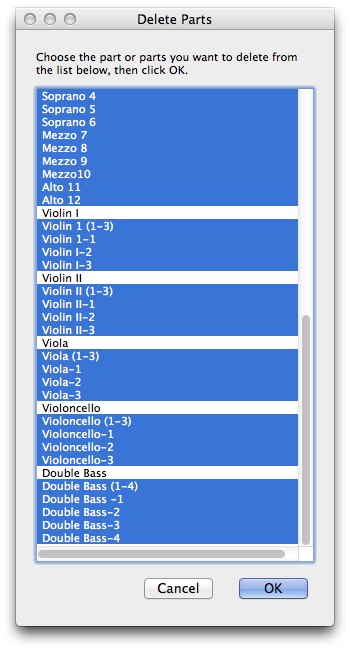 Parts aren’t quite as bulky as versions when it comes to files size, but the savings is still significant. Plus, having additional parts in a file can be confusing if you don’t plan on using them.

If you work in Sibelius 8.5.1 and open files created in earlier Sibelius versions in which rests were manually moved...

The new CineScore music preparation templates for Finale and Sibelius offer pro-looking scores and parts for studio sessions at a...