Composers, arrangers, and engravers may hold strong preferences in various areas of music notation. But perhaps the one area where habits are most ingrained — and resultant preferences most strongly developed — is in note input. It’s vital that the process of placing notes in the score, whether by creating or copying, is as fluid and seamless as possible. And this is doubtless part of the reason users are more likely to stick with what they know: it’s much easier to enjoy the dance if you don’t have to think about where to place your feet.

Beginning in the 3.5 update, Dorico officially added support for note input using pitch-before-duration. Previously, users were required to specify the duration first (including the dot), then press the appropriate letter key or note on their MIDI keyboard to choose the pitch, at which point the note was added to the score. This pitch-after-duration method can be a challenge for users making the switch from Finale, as well as some users coming from Sibelius (where both input methods are available). It’s especially problematic when arranging at a keyboard, where the user will often wish to noodle for a bit before entering the desired notes. To this point, it’s been necessary to leave note input mode, audition the notes, and re-engage note input.

…indicating that you’ve switched to pitch-before-duration!

When Pitch Before Duration is active, the notes you press, or press-and-hold, are previewed in light-grey: 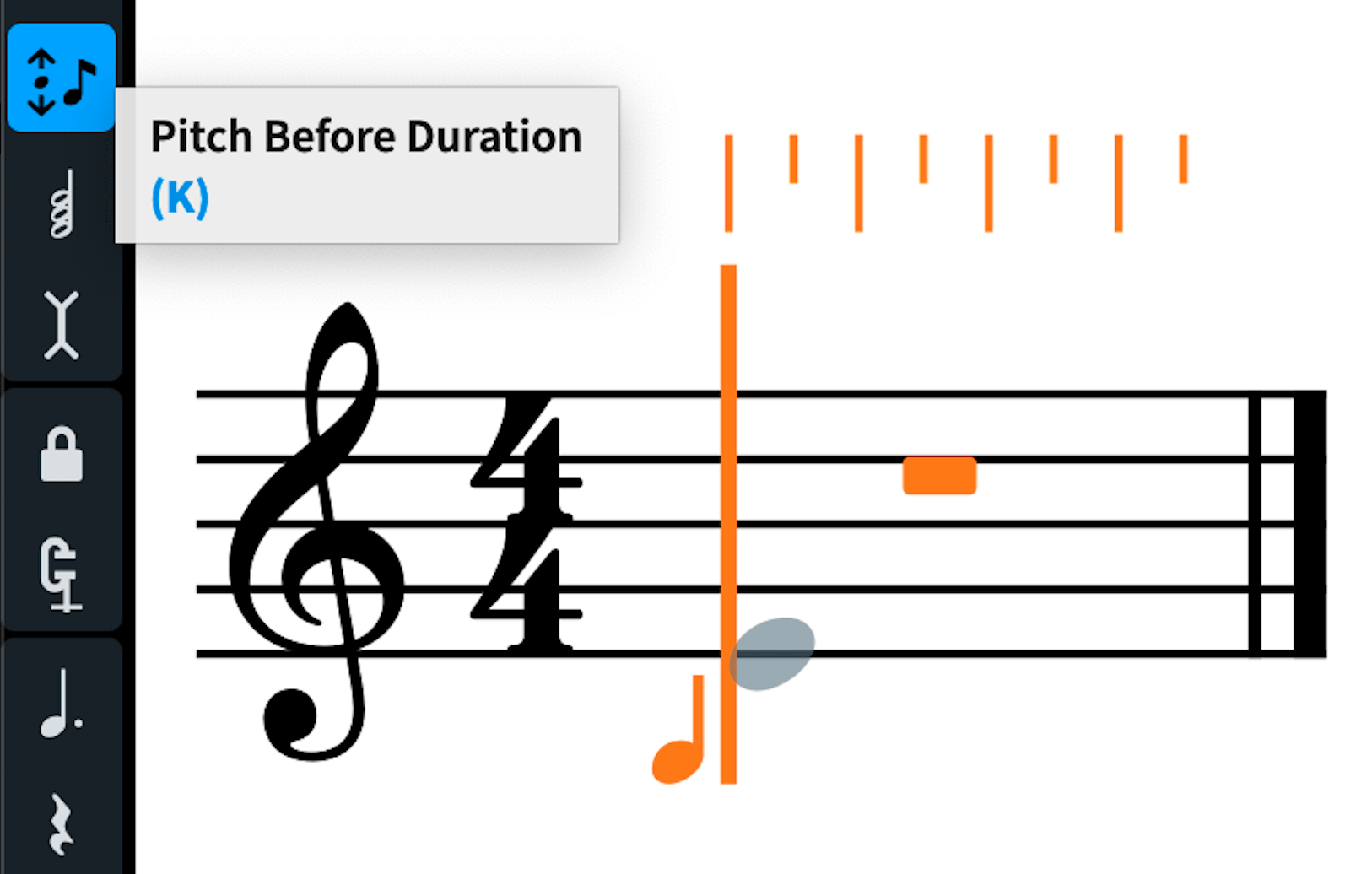 Noodle as much as you like: when you’re settled on the desired note or chord, press the number for the appropriate duration.

In Dorico’s Preferences (Ctrl+comma on PC and Cmd+comma on Mac), you can set defaults for note input behavior: 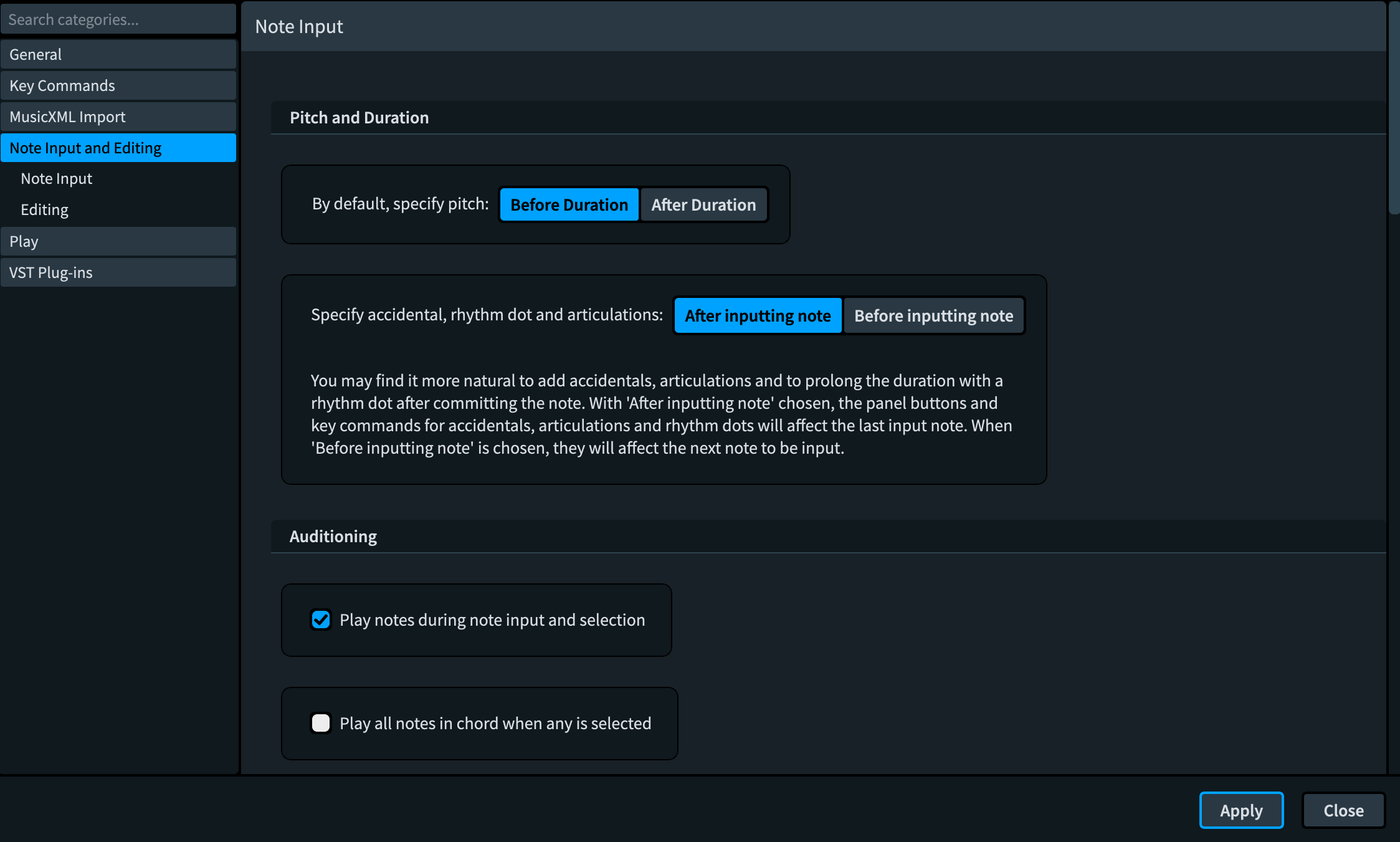 You might also notice an interesting option below it: users now have the option of adding rhythm dots and articulations after the note! This may trip up some users, but I found it instantly more natural. It just made sense to me: pitch first, then assign a rhythm (and a dot, which comes after the note visually and conceptually, since it’s additive), then assign an articulation to the note you’ve just entered.

If you’re using pitch-before-duration with a computer keyboard, Chord input (Q) and other functions work as they did previously.

One small detail: when the selection is set to notes that have been inputted, and you’ve just input a chord, pressing the down arrow will allow you to select and modify different notes in the chord without leaving note input — a small but helpful function!

Dorico’s first iteration of pitch-before-duration is a giant step that largely hits its target. Users coming from Finale and Sibelius should be aware of a few small differences in functionality.

These differences share a common underlying behavior: at present, Dorico does not account for a MIDI-off message. That is, it doesn’t know whether the selected pitch has been released or is still depressed. While this behavior is understandable for a use case involving only a computer keyboard, it does have some implications for use on a MIDI keyboard.

In Finale’s Speedy Entry, a number pressed with a held note gives you a pitch, and a number pressed without a held note gives you a rest. In Dorico, you can advance the cursor by the current duration by pressing Space, but if you had just entered a quarter note and now need an eighth rest, you can’t switch to eighths by pressing 5; that will give you an eighth note instead (because Dorico doesn’t know that the note has “stopped”). You’ll need to invoke Rests (comma) to advance (or use the Right arrow key). When you do, the shadow note change to a shadow rest, indicating rests are enabled.

The second slight difference (and this one is less disruptive) is that each new chord needs to be depressed afresh. In the following example, the bottom note cannot be held while the notes above are changed, but must be played each time:

These tweaks aside, pitch-before-duration is a welcome addition to users, especially those composing with a MIDI keyboard.

Pitch-before-duration is explicitly targeted at users switching from other notation software with this feature. To sweeten the incentive, Steinberg is running a limited-time crossgrade sale on Dorico Pro.

Ordinarily, the Dorico crossgrade price for users with a valid Finale or Sibelius license is a respectable $280 US. Through September 17, 2020, however, Steinberg is taking an additional 50% the price, making the cost of purchasing Dorico Pro just $140 — a whopping 75% off of the $560 retail price. This is the lowest price we have ever seen for a new full license for Dorico Pro.

Although this campaign is marketed as “Make the switch,” you do not, in fact, need to surrender your Finale or Sibelius license to take advantage of this offer — a common question with crossgrade promotions. You can add Dorico to your toolbox for $140 and go right on using other software as well, if you like. The fine print is worth reading:

To qualify for the Dorico Pro 3.5 crossgrade, you must be able to provide proof of ownership of an existing full Finale or Sibelius license. You don’t have to give up your existing software: you can continue to use and upgrade it as normal, so there’s nothing to lose. Cut-down versions such as Finale Allegro, Finale PrintMusic, Finale Guitar, Finale Songwriter, Finale Notepad, Sibelius First, Sibelius Student, and G7 do not qualify. If you have a Sibelius Ultimate subscription, you must have been a subscriber for at least 12 months to qualify. Proof of eligibility is required at time of purchase. This offer runs from 17 August 2020 until 17 September 2020. This offer does not apply to educational licenses.

There's nothing like a good run through the alphabet, from A to Z, and then some. Here's what pressing each...

Steinberg has released Dorico 2.2.10. We explore what's new in this update, which introduces improvements across all areas of the...

In addition to using the default keyboard shortcuts in Sibelius and Dorico, you can program your own, and even override...