Back in the days of Sibelius 5 and earlier, Sibelius was fairly restrictive about tuplet ratios. It would only let you enter tuplets where the first number in the ratio was between half and two times the second number. In other words, if you wanted to fit 9 eighth notes in the space of 4 eighth notes, that was disallowed.

In Sibelius 6 this restriction was loosened somewhat to encompass the vast majority of cases. The new limit was that the first number in the ratio had to be between a quarter and four times the second number. So 9:4 was okay, but 20:4 was not. 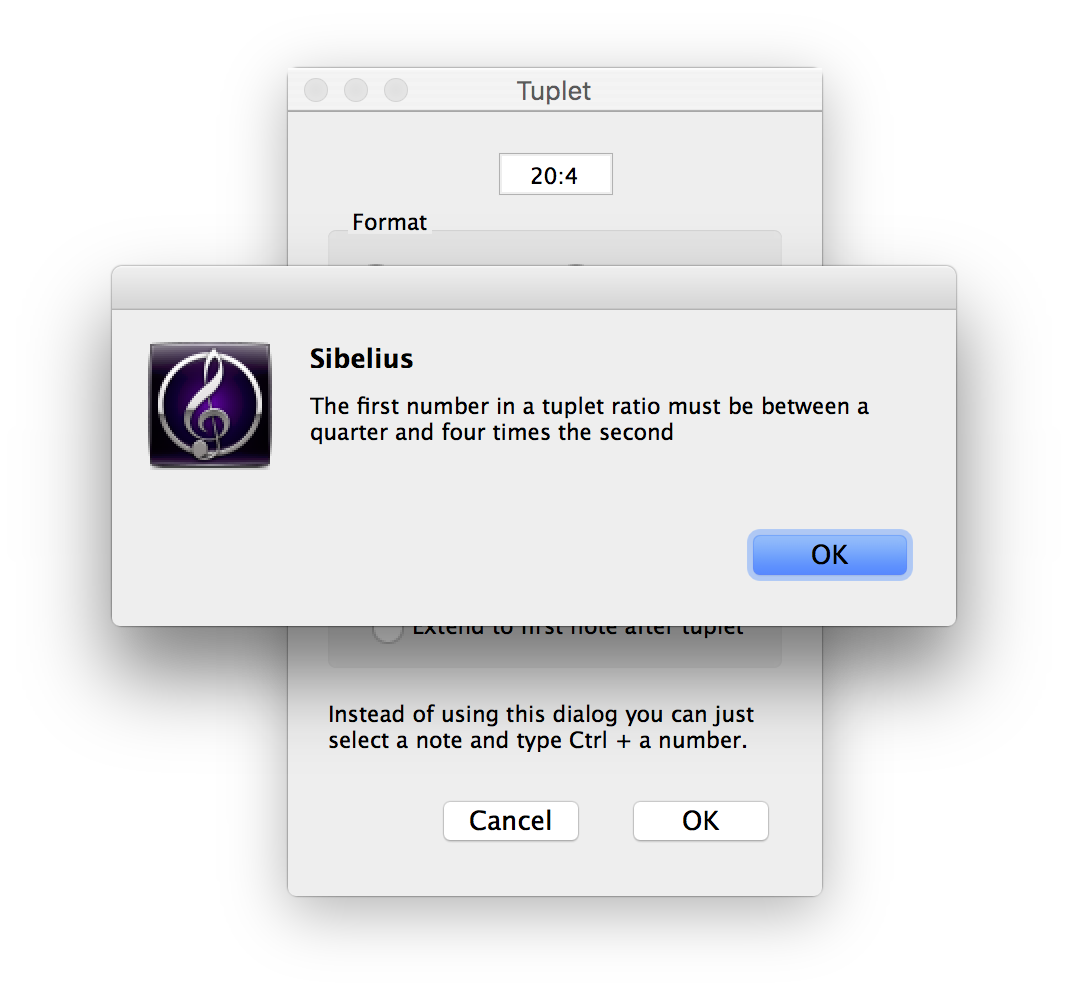 Users still come up against this limitation, though, as described in a Sibelius users’ forum post from last year.

It turns out that Sibelius’s limitation on tuplet ratios is artificial. While Avid has said that extreme numerator/denominator combinations may cause instability in note spacing algorithms, Sibelius can otherwise support these types of examples — scores imported from a MusicXML file with more outsize ratios appear correctly, and plug-ins can create these more extreme ratios as well.

This new plug-in, called Create N by M Tuplet, which allows the user to create tuplets larger than those allowed by Sibelius by default, has actually been around for a while. Hans-Christoph Wirth wrote it in 2009 and shared it privately (including with me), but it was never published.

I’ve always hoped that it could be available to everyone, and fortunately Bob Zawalich tidied it up and published it last week. Bob said, “All the plug-in does is call the routine that creates a tuplet using the values from the plug-in dialog. Hopefully it will give you a bit more freedom to create tuplets. Thanks to Hans-Christoph (who wrote the Tuplet plug-ins that ship with Sibelius) for letting me publish his plug-in.”

Simply start a tuplet in the usual way by entering the first note, but instead of creating a tuplet from Note Input > Triplets > Other, run the Create N by M Tuplet plug-in instead, and enter your desired ratio.

The plug-in will default to the unit in your score, but you can select a different one from the drop-down menu if you so choose.

The result will be a tuplet with your desired ratio:

Admittedly, the instances in which you would have a need for such a tuplet are unusual, but they do happen. It can be useful, for instance, in the service of creating custom feathered beamed groups, like those described in last week’s post.

Create N by M Tuplet may be downloaded directly through Sibelius 7 and higher at File > Plug-ins > Install Plug-ins > Notes and Rests. Users may also install it manually in Sibelius 6 or higher by visiting the plug-in download page and following the usual manual installation procedure, or by using the Install New Plug-in plug-in.

A plug-in creates tuplets in Sibelius that appear to cross barlines. You can specify a tuplet starting position, a tuplet...

The Sibelius plug-in Create Tuplets Different Units automates the entire process of creating a tuplet where the "numerator" and "denominator"...

It sounds so simple, right? Two quarter notes in the space of three eighth notes. Except… there's a bit more...