The hits keep on coming from Bob Zawalich! Two Sibelius plug-ins to help get you sorted.

Swap or Replace Text Styles does just what you would think it does: If you have a selection containing two different text styles, the plug-in will swap them.

One of the most useful cases is one in which you would like to swap two verses of lyrics. While it sounds rather easy, before Bob’s plug-in came along, this was a rather involved multi-step process. The plug-in makes it as easy as a click: 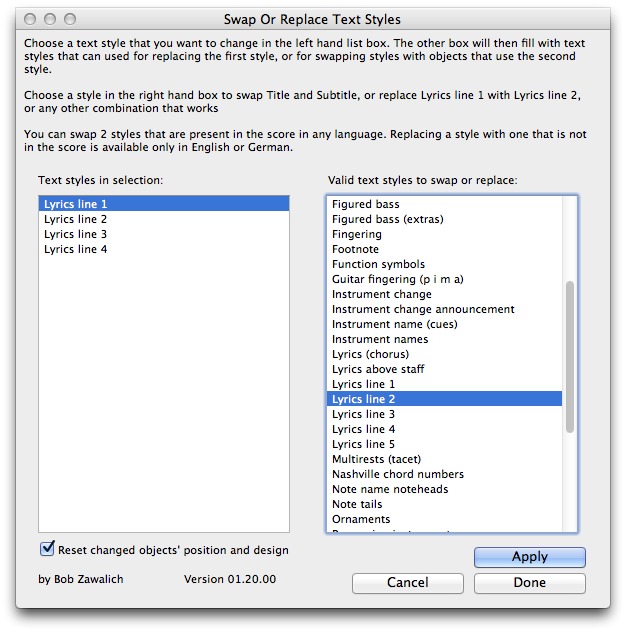 Here’s an example before running the plug-in:

The plug-in can also simply replace one text style with another style, which saves you a few steps of having to use the filters and changing the text style in the Ribbon. Swapping of styles present in the current score work for all languages supported by Sibelius. Replacing with a text style not currently present in the score is only available for English and German.

If you find yourself needing to convert Staff text to System text — say, because a file has all of its tempo markings erroneously placed in the Technique text style — Roman Molino Dunn’s $5 plug-in Convert Staff Text To System Text will be your friend. Naturally, a plug-in doing the reverse, Convert System Text To Staff Text, is available as well.

Swap or Replace Text Styles may be downloaded directly through Sibelius 7 or 7.5 at File > Plug-ins > Install Plug-ins > Text. Users may also install it manually in Sibelius 6, 7 or 7.5 by visiting the plug-in download page and following the usual manual installation procedure.

The other new plug-in, Gap Before Bar, is the first plug-in exclusive to Sibelius 7.5, because it takes advantage of a new feature in 7.5’s ManuScript language. The plug-in optionally traces bars that contain non-zero gaps before bars, or resets such gaps to zero, and it can process the current score, all open scores, or a folder of scores.

The entire score is always processed, regardless of selection. To reset specific gaps, you’ll want to run the plug-in to trace the location only, and then reset the gaps manually by selecting the desired bar and opening Home > Inspector.

This plug-in could be useful if you are working with a score where many of the systems have been manually indented, or if you want to re-join the first bar of a coda to the preceding bar.

Gap Before Bar may be downloaded directly through Sibelius 7.5 at File > Plug-ins > Install Plug-ins > Layout. Users may also install it manually in 7.5 by visiting the plug-in download page and following the usual manual installation procedure.

In this guest post, Bob Zawalich explains the differences among the types of text used in Sibelius, such as staff...