Earlier on this blog, I wrote a tutorial with detailed instructions for how to create custom notehead styles of different sizes. There are several reasons why a user might want to do this, but by default Sibelius is limited to only a couple of options: either use the Small notehead style (Notations > Noteheads > Type > Small) or use cue notes, for which the scaling percentage is set document-wide in Appearance > Engraving Rules > Notes and Tremolos (and, it should be noted, it is not possible to apply cue note sizing to individual notes of a chord).

As demonstrated in the post, resizing noteheads is a relatively easy process in Finale. If you wanted to achieve the same results in Sibelius, you would have had to follow the steps in the tutorial — that is, until now.

Seeing an opportunity to benefit the Sibelius user community once again, Bob Zawalich created an ingenious solution to automate this multi-step process. As I mentioned at the end of last month’s tutorial, if you copy a passage that uses your custom noteheads and paste it into another document, all the attendant custom symbols and text styles from your source will transfer over into your destination document.

Bob “riffed” on this idea and within a couple of days had a working prototype. He then spent the next month refining and testing his plug-in, which became Scale Notehead Sizes.

The result seems like magic, especially if you understand what had to be done behind the scenes. Simply select any notes or passage, and run the plug-in. You’ll get a choice of notehead sizes in 5% increments, from 50% to 125% of the normal-sized noteheads: 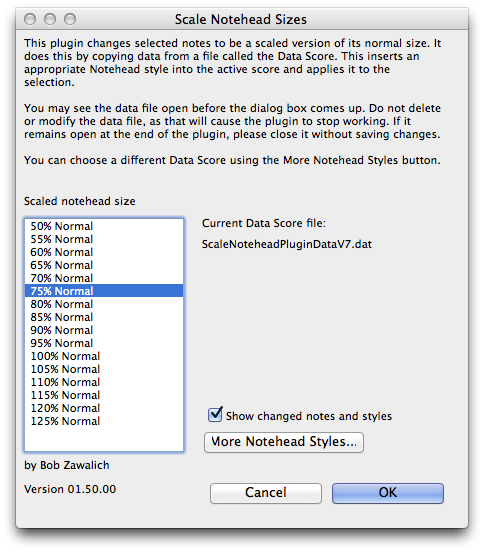 Choose your desired size, and click OK. As is the case with several plug-ins, another temporary score, or data file, opens to facilitate the process (you can read more about it in the documentation that is provided with the plug-in). You may see the data file, along with the selected notehead style and a message informing you what has happened: 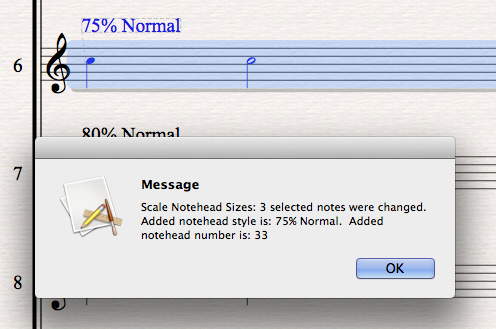 The plug-in will run in Sibelius 6 or later. In Sibelius 7 or later, the resized noteheads will inherit the music font used for the Common symbols text style. In Sibelius 6, the plug-in will use the Opus font, so if your document uses another music font like Inkpen or Helsinki, you’ll want to change the text style used for the re-sized noteheads (instructions are provided in the documentation). 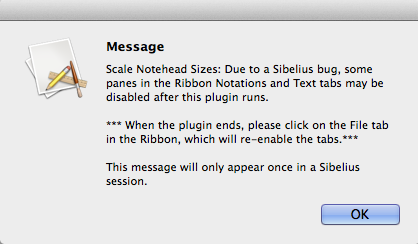 As the message says: simply click on the File tab to clear this problem.

Thanks to Bob for spending countless hours creating a solution for the benefit of the user community. The documentation provided with the plug-in goes into further detail about the mechanics of the plug-in and describes how to customize or create a new data file, should you choose to do so.

Scale Notehead Sizes may be downloaded directly through Sibelius 7 or later at File > Plug-ins > Install Plug-ins > Notes and Rests. Users may also install it manually in Sibelius 6 by visiting the plug-in download page and following the usual manual installation procedure, or by using the Install New Plug-in plug-in.

Bob Zawalich takes us inside the process of creating a way to color individual noteheads within a chord, eventually resulting...

Reducing or enlarging noteheads to custom sizes in Finale is a cinch, but with some patience and determination, you can...