Good music notation practice says that when beams are placed over rests, it is the rest that should be displaced in order to accommodate the beam in its normal position, not the other way around. Yet in Sibelius, this is impossible to achieve by default:

Finale users have long enjoyed the ability to set this globally (Document > Document Options > Beams > Allow Rests to Float), but Sibelius users have always had to manually re-position the rests.

Bob Zawalich’s new plug-in, Float Rests, will automatically move all the rests contained within a beam group so that the beam is positioned normally. 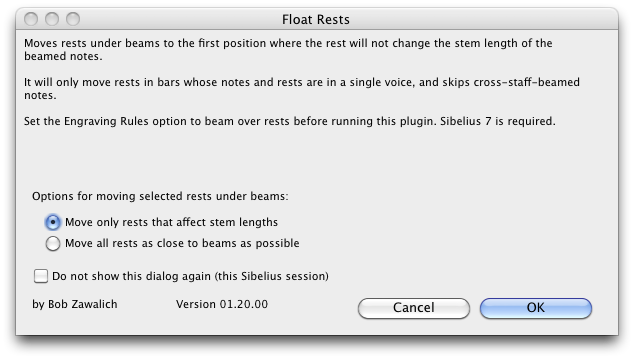 After running the plug-in, our example is transformed:

Keep in mind that if your music changes, you will have to run the plug-in again or move your rests manually, so it’s a good idea to run this plug-in near the end of your layout and formatting workflow. Bob offered a couple of other caveats: “Rules for note layout are complex, and the plug-in will not always get the position correct, so please check the output visually,” he said. Also, “the plug-in will not attempt to change positions of rests in bars with multiple voices or in bars with cross-staff beamed notes. These are just too hard to figure out.”

Even with those warnings, Sibelius users will surely be excited to open this present at this time of year.

Float Rests may be downloaded directly through Sibelius 7 at File > Plug-ins > Install Plug-ins > Engravers’ Tools. Users may also install it manually in Sibelius 7 by visiting the plug-in download page and following the usual manual installation procedure.

The impressive plug-in Flip Selected Notes makes it easy to flip or force the stem direction of notes and beamed...

This blog post is written by Alexander Plötz, a music engraver, editor, proof reader and more based in Dresden, Germany....