A couple of months ago on this blog, I described the differences between slurs and ties, and how to work correctly with them in Sibelius. Among the tools to help are a pair of plug-ins by Roman Molino Dunn: Locate Slurs Ending On Ties, which extends slurs to the end of a tied note; and Locate Ties Entered As Slurs, which can convert slurs to ties — useful when working with a file in which the ties have been erroneously entered as slurs.

About the latter, my friend Kelly Fenton asked:

Do you know if he has a plug-in that works in reverse? I’ve in the past received scores where the composer has used ties instead of slurs. Any plug-in for that instance?

At the time, no such plug-in existed. Since then, Bob Zawalich has responded to the challenge and created such a tool. Dangling Ties to Slurs will do just what it says, as Bob describes:

This plug-in replaces dangling ties with slurs, for use in scores where someone has mistakenly entered slurs as ties. It cannot replace the ties with slurs at the same location with the same length, which is what is desired.

Instead, it automates this process, for each note with a dangling tie:

There are issues and compromises here. If the ties had been dragged, the duration will not be maintained. All slurs extend only for the duration of the initiating note. Slurs added to chords will go to the top and bottom of the entire chord, not at the note location. It works pretty well for single notes slurred to the following note.

Ties are considered to be dangling if the following note or chord in the same voice does not have a note of the same pitch as the previous note with a tie. Cross-voice ties are not processed correctly. 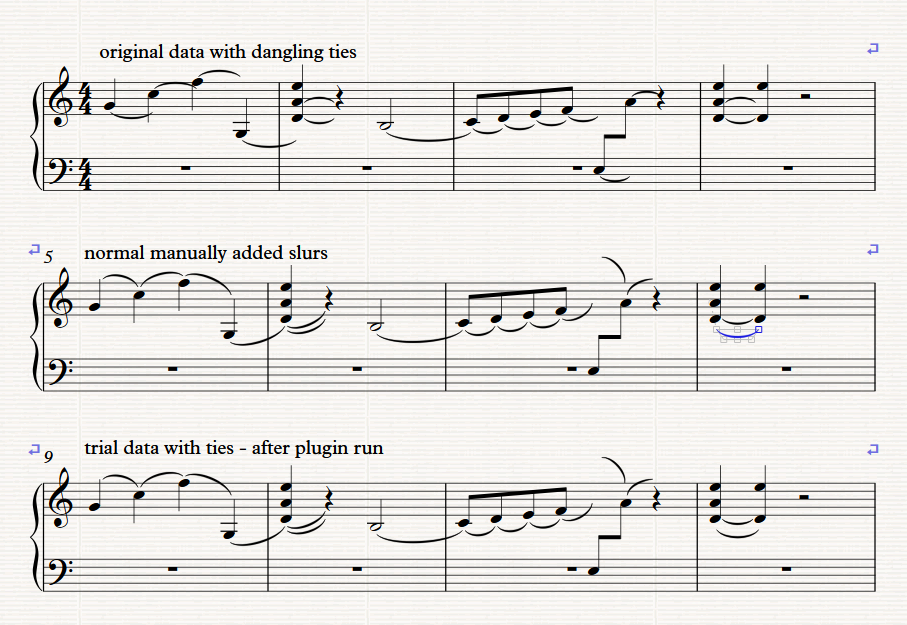 Dr. Bob’s prescription comes with some instructions, to be heeded:

Using this plug-in is a bit like having a drug with side effects. It will most likely not give you a finished result, but if you have this situation, it should speed up the process of fixing it. Use only as directed, and keep a copy of the original score to help set the slur lengths.

Taken together with a healthy diet of Sibelius tips and plenty of exercise, this plug-in will help your scores feel better in no time.

Dangling Ties to Slurs may be downloaded directly through Sibelius 7 or 7.5 at File > Plug-ins > Install Plug-ins > Notes and Rests. Users may also install it manually in Sibelius 6, 7 or 7.5 by visiting the plug-in download page and following the usual manual installation procedure, or by using the Install New Plug-in plug-in.

Just in time for the holidays, we've found a few presents under the tree! Three new Sibelius plug-ins from Kenneth...

Learn about the differences between slurs and ties, and use a couple of convenient plug-ins to convert any ties incorrectly...