This post is written by Ed Hirschman, a composer, arranger and co-founder of Art of Sound Music. Art of Sound Music is a sheet music publisher and retailer based in Princeton, New Jersey, representing the music of over 65 composers and arrangers worldwide. Read on to learn about Ed’s new plug-in, Add Turbo Comment.

At Art of Sound Music, our composers send us music notation files and manuscripts, and we improve the quality of notation by applying industry best practices as well as our own internal engraving standards. The engraving process can include multiple rounds of written comments going back and back and forth between our staff and the composer.

After making a first draft of notational improvements to the score and parts, we provide a PDF and separate file of questions/suggestions to the composer for review. In the early days, the questions would be typed manually into a Microsoft Word document, text file, or body of an e-mail, along with references to the bars or instruments in question. Sometimes the responses from the composers didn’t clearly show which answer went with which question, causing confusion and delay.

With the advent of the Create > Comment feature in Sibelius 6 (Review > Comments > New Comment in Sibelius 7 or later), this process greatly improved for two reasons: 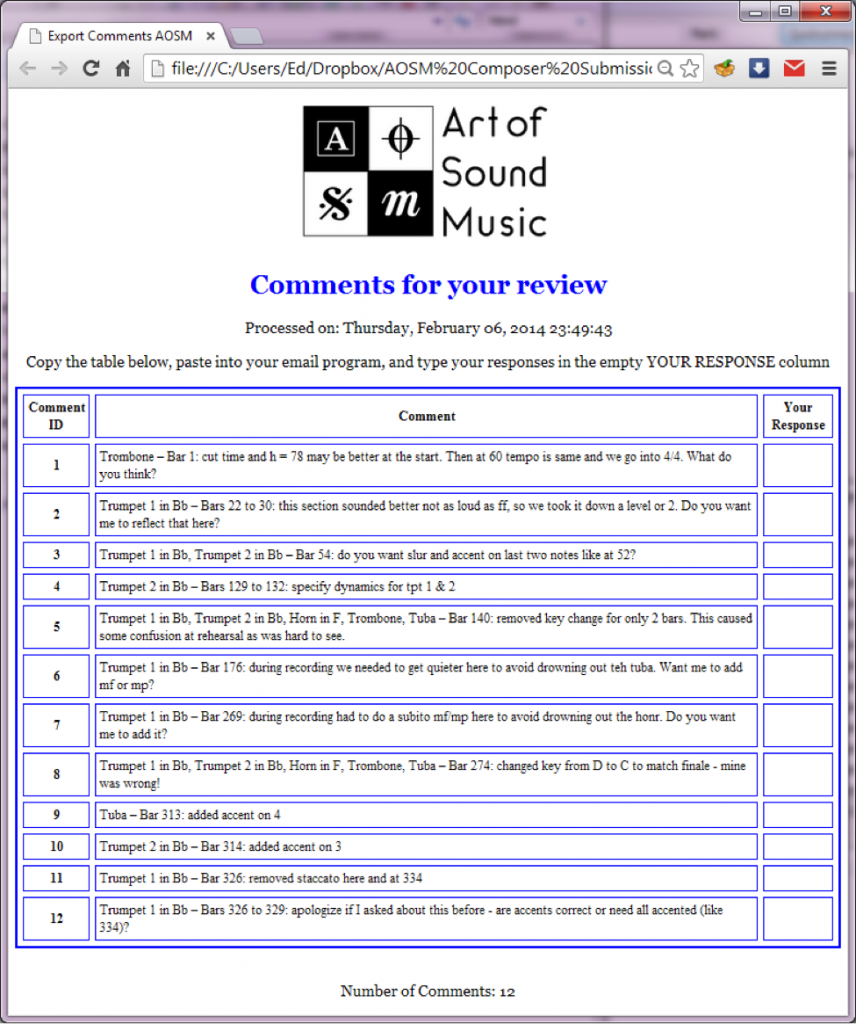 At that time, we stopped emailing the PDFs and Comments file to composers, and starting sharing with each via a dedicated Dropbox folder. These changes made the review process much easier, but I realized that by creating a new plug-in I could make it even easier/faster to add comments, and the comments would be more clear for the reader.

So in March 2014, I created the Add Turbo Comment plug-in. For my own personal use, I’ve added a keyboard shortcut to invoke the plug-in (Alt-T on Windows), which allows me to add comments more easily and conveniently. Here’s the main dialog box: 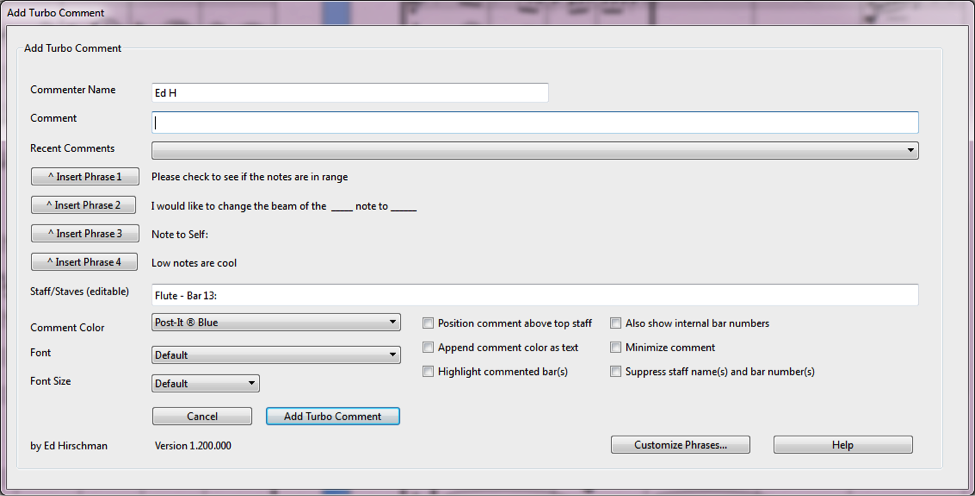 If you are a user of the built-in commenting feature, this table shows how the Add Turbo Comment plug-in makes adding comments easier, faster and more consistent:

A few other things to know about Add Turbo Comment. There are options to:

To create a PDF with the comments and/or the highlights visible, go to File > Print and: 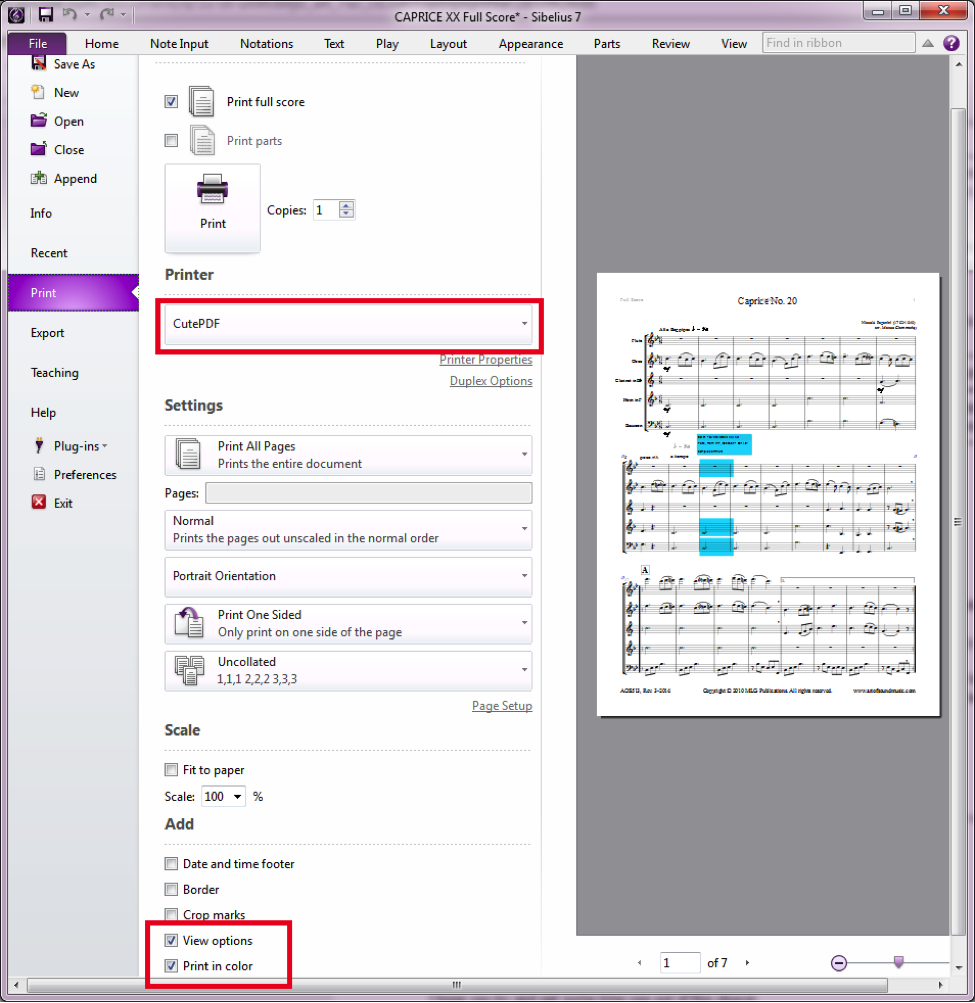 I hope this has given you some insight into why I’ve created Add Turbo Comment, what it does and how we use it. It should be flexible enough to support other workflows and uses, even in a single user scenario.

Add Turbo Comment may be downloaded directly through Sibelius 7 or later at File > Plug-ins > Install Plug-ins > Comments. Users may also install it manually in Sibelius by visiting the plug-in download page and following the usual manual installation procedure.

Editor’s note: Keep in mind that when you add comments to your score in Sibelius 7.5 or later, they will be added to the Timeline by default — making this plug-in even more useful.

Ed also said that “this plug-in is dedicated to Bob Zawalich for his significant contributions to the Sibelius community and for patiently coaching me in the art and science of writing plug-ins” — a fitting tribute indeed!

A new plug-in from Tom Curran automates the laborious task of transferring the structure of a sketch score, such as...

This plug-in allows you to specify the music font for the Beats Per Minute (BPM) characters in 'Tempo' text and...