All of these plug-ins may be downloaded directly through Sibelius 7 at File > Plug-ins > Install Plug-ins > [Category]. Or, click on the link on each plug-in name to be taken to the plug-in’s page on Sibelius.com, where you can download the plug-in and install it manually.

1. The first of these gems is Bracket Notes, found in the Lines category. It will add a vertical bracket line to the left of selected notes (an operation that ordinarily would involve selecting the vertical bracket from the Lines gallery, manually positioning it, and usually disabling Magnetic Layout).

If more than 2 notes in a chord are selected, the highest and lowest notes will be connected.

Bob notes that the plug-in “cannot make horizontal space for added lines, so you will need to do that manually. The vertical position of the line will usually be correct, but you will likely need horizontal adjustments.”

This can be very useful for adding double-stop indicators in string parts, as follows. Simply run Bracket Notes on a selection like this: 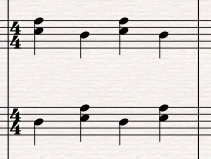 To get this result: 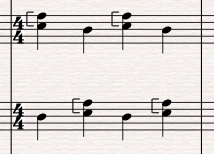 Because Sibelius 7 and Sibelius 6 handle certain things differently, this needed to be taken into account to make the plug-in compatible with Sibelius 6. Bob mentions that “the code that figures out the stem direction for notes in Sibelius 6 was graciously provided by Neil Sands, and I thank him for allowing me to include it in this plug-in.”

2. Respell Chord Symbols is found in the Chord Symbols category. It will respell chord symbol names, changing sharps to flats, and so on. Notes and key signatures are not affected. There are options for how certain chord roots are respelled:

Likely uses of this plug-in would be in cases where a song was transposed to a remote key and/or where an instrument’s transposition results in a series of chord symbols with remote spellings (Quick! Spell an A#7+ chord).

3. Remove Duplicate Pitches is found in the Notes and Rests category, and while it is similar to the shipping plugin Remove Unison Notes, this plug-in will also process notes in tuplets. Its main intention is for cleaning up piano reductions in large scores. A more detailed description is available on the plug-in’s download page. Bob says that “this plug-in is somewhat more cautious about removing notes than Remove Unison Notes. If there are still too many, you might try running that plug-in as well.”

Thanks, Bob, for these terrific additions to every Sibelius user’s toolbox!

A roundup of activity and news about Sibelius plug-ins over the last several months. Bob Zawalich takes us on a...