Savvy Sibelius users have been treated to a bounty of new and updated plug-ins in recent weeks. In this first post I’ll highlight plug-ins created by Kenneth Gaw. Later in the week I’ll focus on Bob Zawalich’s plug-ins.

It’s worth saying here that Kenneth, Bob, and all the other independent developers who spends countless hours developing these add-ons make Sibelius even easier to use for me and thousands of users, and I am so appreciate of their efforts — thank you!

All of these plug-ins may be downloaded directly through Sibelius 7 at File > Plug-ins > Install Plug-ins > [Category]. Or, click on the link on each plug-in name to be taken to the plug-in’s page on Sibelius.com, where you can download the plug-in and install it manually.

In short order, here are Kenneth’s new and updated plug-ins (all were released or updated on May 14, 2013):

1. Unfilter Selection and Unfilter Selection Whole Bars is found in the Filter and Find category. It basically functions as a reverse filter. If you have selected an object, or objects, and decide that you need to operate on the entire passage containing those objects, just run this plug-in. This plug-in operates without a dialog, and Kenneth helpfully suggests assigning a shortcut to it if you find yourself doing this sort of thing a lot.

2. Delete Voices 1-4 is also found in the Filter and Find category. It was first released in February 2013 and has quickly become one of my new favorites. Filtering out a voice and deleting it in Sibelius can take up to six steps if tuplets are involved, like in this example:

With this new plug-in, Voice 2 is gone in one command! Note that since the plug-in is designed to be run from keyboard shortcuts, there are actually four plug-ins corresponding to one per voice.

Kenneth recommends defining Ctrl+Shift+Alt+F1-4 for these plug-ins respectively. Personally, on the Mac, I use Control+Option+Command+Shift+1-4. Either way, this corresponds to the default Alt(Option)+1-4 (Create or Move to Voice) and Ctrl(Command)+Shift+Alt(Option)+1-4 (Filter Voice) shortcuts.

3. Move or Copy to Another Voice is is also found in the Filter and Find category, and was covered here back in February. It moves or copies notes, lyrics, dynamics (including hairpins) and other text from one voice to another. Unlike Sibelius’s filters, it works with tuplets, and offers many other useful features. The recent update adds improvements in the way it handles destination voices which are not empty, copies note and rest properties to the destination voice and deals with the beam property in rests.

4. Multiply Dynamics is found in the Text category. It copies dynamics from one to all staves within a selection and avoids placing them on rests or empty bars. Like some of Kenneth’s other plug-ins, it does not feature a dialog, and he suggests assigning to a keyboard shortcut such as Alt(Option)+* on the numeric keyboard.

It wasn’t immediately evident to me how this worked initially, but it was easy once I figured it out. Simply select a passage with multiple staves, all of which are devoid of dynamics except for one staff (it does not have to be the top staff), like so: 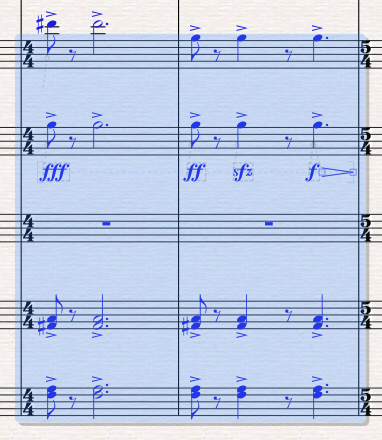 You don’t need to copy anything to the clipboard; just simply run Multiply Dynamics and it will copy the dynamics from one staff to all other staves with notes, skipping any empty staves in the process. (Note that if two or more of your staves have conflicting dynamics, you’ll get strange results.)

5. Decrease and Increase Dynamics is also found in the Text category and has become another personal favorite. These are actually two separate plug-ins, again designed to be used with shortcuts (Kenneth suggests Alt(Option)+–/Alt(Option)++ for decrease and increase, respectively). These simply decrease or increase by one level all dynamics within a selection. It’s similar to running Change Dynamics and choosing “One level softer” or “One level louder”, except the benefit is that there is no intervening dialog. Update: In response to that suggestion, Kenneth has updated the plug-in to work with any type of selection – so quick and easy!

Kenneth is a long-time Sibelius user, and his contributions are most welcome. I asked him last week how he got started writing plug-ins. He is a music teacher in Glasgow, Scotland and, as a devoted churchgoer, he said that “most of his compositions tend to be for church choir or educational purposes.”

I started writing plugins when I moved from the Acorn version of Sibelius to Sibelius 2 and found three basic uses for them.

Having found these plug-ins useful it occurred to me that others might also, so I contacted Daniel Spreadbury who put the first versions on the Sibelius website shortly before he left.

And we’re glad it occurred to him!

One of the unique things about Sibelius is that anybody can develop a plug-in for the program using its built-in...