I love typesetting just as much as the next guy (maybe even a little more so!) but that doesn’t mean I want to do it all the time. Shortcuts and time-saves allow me to finish projects faster, which both keeps the cost down for clients and allows me time to sleep (sometimes for four hours a night or even more!).

Let me explain: I don’t mean doing a bad or unfinished job. Skipping the final proofread is a bad shortcut. A good shortcut involves spending a little time at the start of a project on something that will save more time later on — think making a custom house style instead of changing all the fonts manually for every score you work on. It might not seem like a shortcut during the setup, and will often involve a lot more work than simply diving into a project, but the payoff is worth it. It’s an investment.

I produced parts for a reduced-instrumentation opera — a fairly large typesetting project which I think will serve as a good example for how thinking ahead can speed up your process. Let’s explore.

The very first thing I do at the start of every project is to make backups.

The client wanted parts for an opera with a reduced instrumentation, and had provided me with two resources: an annotated full score outlining the reduction, and a set of Sibelius files for a previous arrangement of the opera for similar forces. These files were a huge time-save; with 80% of the notes already in the program ready to be reallocated per the new arrangement, this project was far quicker than it otherwise would have been. Of course, not every project you do will get a head start like this, but it’s always worth asking!

Rather than work straight into these files, I first made copies and kept them in a separate folder (later backed up automatically). This was in case anything went horribly wrong — maybe I would accidentally delete a passage, or I could do something to corrupt a file. Of course if absolutely necessary I could ask the client to resend the files, but any time I’m relying on somebody else to send something I’m waiting, not working. This is a shortcut one hopes to never actually have to use, but it’s best to set it up just in case.

I’ll freely admit to being a messy desktop person with regard to personal files, but for professional projects I always put a clear naming and location system in place. How you do this is up to you, but as you accumulate more and more files you’ll start to appreciate being able to find them quickly, both now and in future — I have had previous clients ask me to resend files a year after their original delivery, which I can do in seconds thanks to organizing my files clearly.

Using a clear naming scheme was also important, especially dealing with so many files. For Sibelius files I used number, instrumentation, opera title. The parts were similarly clear.

Step 2: Getting on with it

With all my files organized and backed up, I got right into arranging. Not really any extra shortcuts here, just a matter of opening the score to page 1 and working through until the end.

I did make sure to not skip any steps — the most obvious of these being including all the required instruments. Some of the numbers didn’t require all the instruments involved in the reduction (the trumpet and horns were often tacet), and perhaps it would have been quicker to not bother adding them to the files. This would have caused problems later on, however, as players still need confirmation if they are not playing. If an orchestra’s librarian looked through the parts and found numbers missing, they could reasonably conclude that the parts were incomplete and demand the client resends a page that doesn’t exist.

Once everything is on the page, it’s time to prepare to put it all in the right place. A lot of this will be done on a case-by-case basis, but there are some things that need to be done to every file regardless of context. I could make these changes 22 times, but that would be a) horribly inefficient and b) an invitation to make mistakes — mathematically, the more you do, the more mistakes you’ll make. Instead, we can make these changes quickly and reliably by using a custom house style.

The client wanted the Sibelius files delivered alongside PDFs, so I couldn’t use my own personal house style — all the third-party fonts look great on my computer but would display incorrectly on the client’s system. I instead created a new house style from scratch that included a number of tweaks, including:

With all of these alterations packaged together into a new (clearly labeled) house style I could save even more time by using the Import House Style into Folder of Scores plug-in, applying it just twice (Act I and Act II) rather than 21 times.

Sadly, some things can’t be applied all in one go; pagination, for example, needs to be applied manually, as do sensible cues. While we can’t create a shortcut to do these more quickly, we can create a shortcut to stop us struggling to remember what we haven’t done yet, and inevitably forgetting a procedure only to spend more time later on going back in to remedy it, potentially disrupting the whole file. This shortcut is a plain old checklist. Files down the side, procedures along the top, make sure it takes files all the way to their completed states, then work through it left to right, top to bottom.

All the typesetting might be complete but the job isn’t quite finished yet — we still need to deliver the files. I could just send the Sibelius files and call it a day, but that leaves the client with more work to do exporting and combining all the PDFs into complete parts and I don’t want to leave a job 95% finished. I was hired to produce parts and I will deliver parts, not parts in small parts.

This is where being clever with filenames can save a lot of time again. First I made a new folder to receive all the exported PDFs, then I used the batch processing tools in Sibelius to export all the parts at once (well, twice — the Sibelius files for Act I and Act II are still in separate folders, but they both got exported into one). I set the filename to %p - %f (see this post for more on that) which made the next step much, much quicker — each Sibelius file name began with “No X”, so this automatically grouped all the separate parts by instrument in numerical order within the one folder.

From here it was easy to drag the files into PDF-BatchStitch, one part at a time, and create compiled parts — exported to a new folder, of course.

You’ve followed all the right steps and ended up with “finished” parts. Well done!

Don’t forget to proofread your work, though. Hopefully there won’t be any major mistakes, but it doesn’t hurt to check. I like to open the PDFs on my iPad and make annotations, then return to Sibelius to make the appropriate corrections, as viewing the files differently makes it easier to spot mistakes. Proofreading might not seem like a shortcut but it sure beats waiting for a player to encounter a rehearsal-stopping typesetting error, and when you think about it, a score with mistakes is an unfinished score.

Once everything has been proofread, any corrections can be exported out individually from Sibelius and pages swapped in using Preview (on Mac anyway).

With everything finished, it’s time to deliver the files to the client. I compressed all the new Sibelius files into one .zip folder and all the finished parts into another, so that the client could easily find everything they needed.

I hope you found some of this helpful for your own workflows. Got any suggestions of your own, or questions? Leave them in the comments below. Happy typesetting!

If you enjoyed this article, you’ll want to pick up Luciano’s ebook: Using Sibelius Effectively: A Guide to Sibelius Ultimate. It condenses years of experience and expertise using Sibelius into a thoughtful, practical 70-page companion to the software.

Written in an easy-to-follow, engaging style, its focus is on helping you produce quality music notation.

Get Using Sibelius Effectively: A Guide to Sibelius Ultimate for just $8.99 at Notation Central. 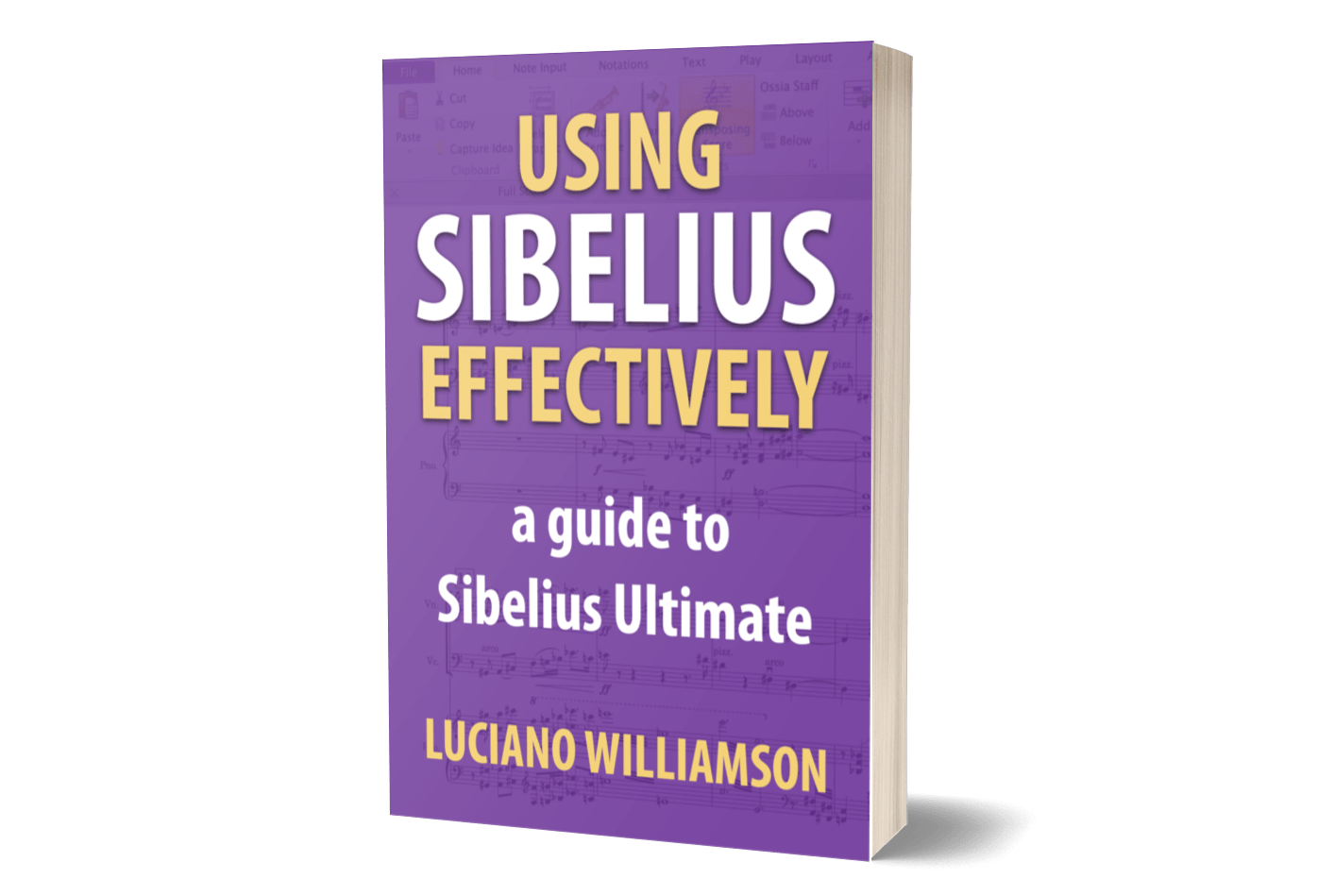 Editor’s note: This post was originally published on Luciano Williamson’s “Check Your Notes” blog as “Measure twice, cut once, or: how planning can speed up your workflow without compromising on quality” and re-published on Scoring Notes with kind permission.

Graphical MIDI Tools (GMT) is a Sibelius plug-in that ingeniously superimposes a sequencer-like frame on any given selection, and then...

In addition to using the default keyboard shortcuts in Sibelius and Dorico, you can program your own, and even override...