Condensing is one way to change the visibility of staves on a system. Dorico already had global rules concerning staff visibility for empty staves which resided in Layout Options under the section Hide Empty Staves. Those global rules are still there, but are now called Staff Visibility, and Dorico has also added a tool in Edit > Staff called Manual Staff Visibility which allows the user to easily hide or show staves throughout a score.

In an orchestral score, especially for large orchestra, it is customary to hide empty staves throughout the score, except for the first page where a display of the full instrumentation at a glance is de rigueur. (See Gould, pp. 521-522.) This is achieved in Dorico by setting the Staff Visibility option to Hide Empty Staves After First System in the Vertical Justification section of the selected layout.

However, there may be instances where a page will show too much white space as a result. Sometimes, inserting a system break and adjusting the staff size for a single page can be an excellent way of dealing with this, but making a few empty staves that are about to appear with music on the following system is also a good way to deal with this issue.

Let’s take a look at a score where the right page is quite a bit greyer than the following pages because of the paucity of staves containing music. 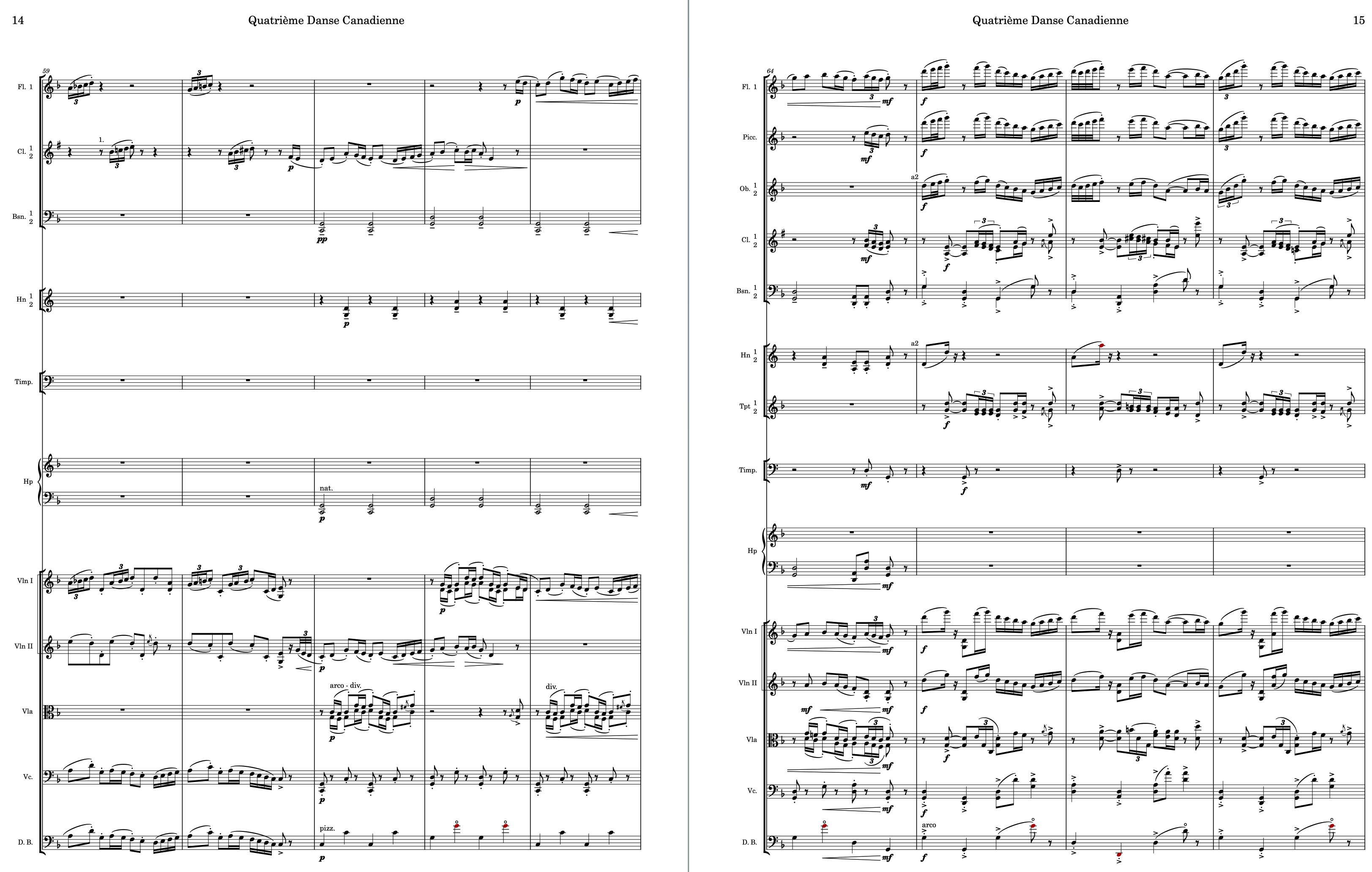 I can select the first note on any instrument on that page and use the command Edit > Staff > Staff Visibility to create a system break which I can then double-click to access a menu. Alternatively, as in this case, insert a system break in Engrave mode and double-click on it, or select it and press Return. 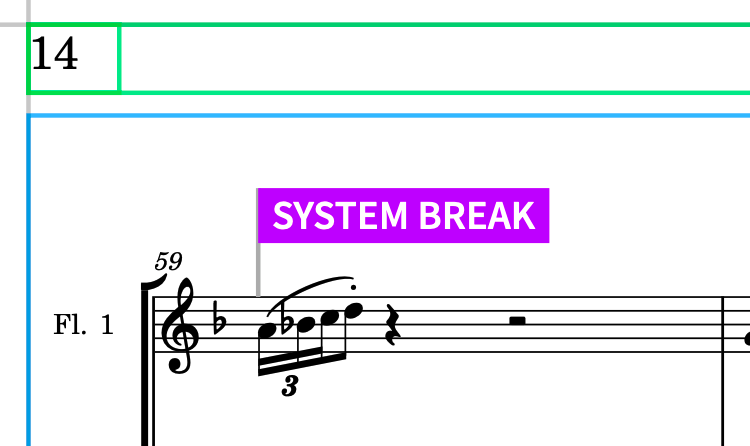 The menu that then appears could not be clearer: 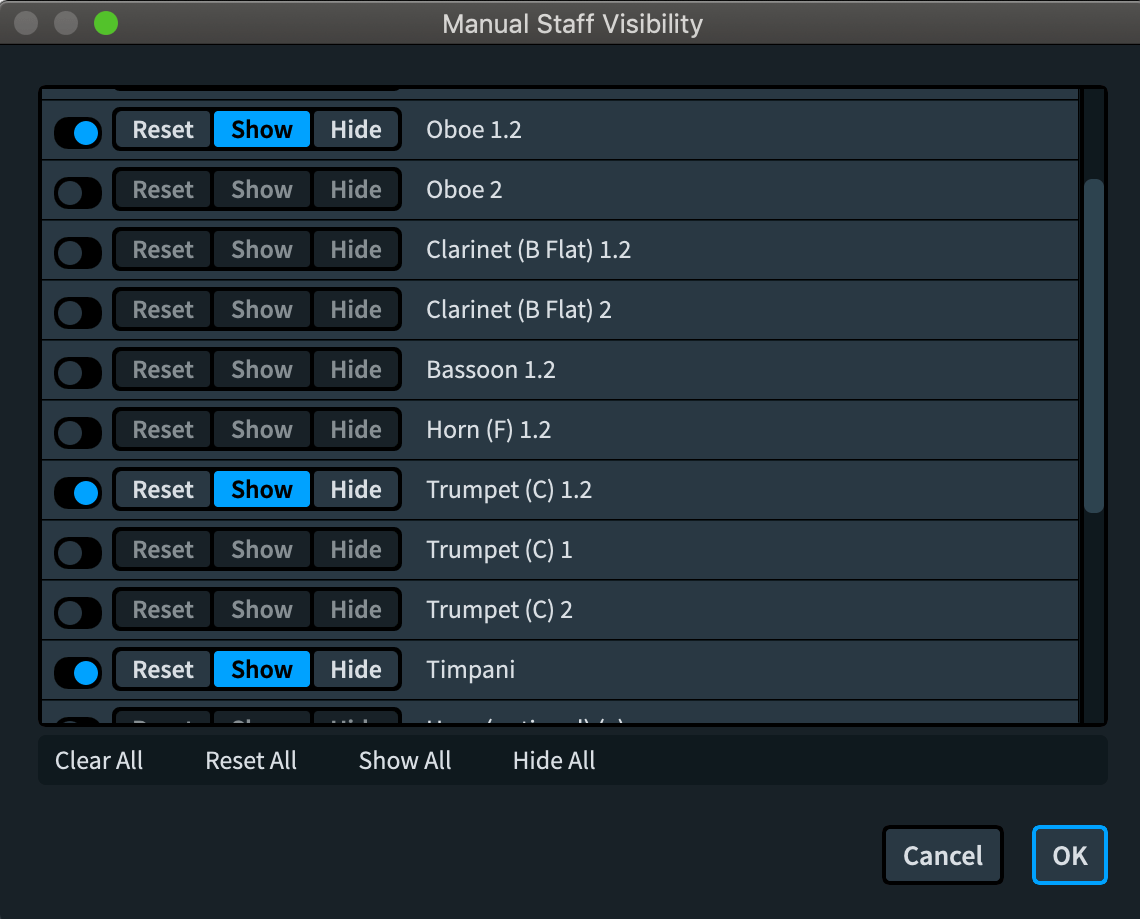 Any switch will activate an instrument to be either hidden, shown or reset. Notice that in the case of this condensed score, you can also choose individual instruments as well as their condensed pairings. In my case, I will select condensed oboes, condensed trumpets and timpani, which are just about to play on the next page. By selecting them with the switch and setting them to Show, I will now get the following result… 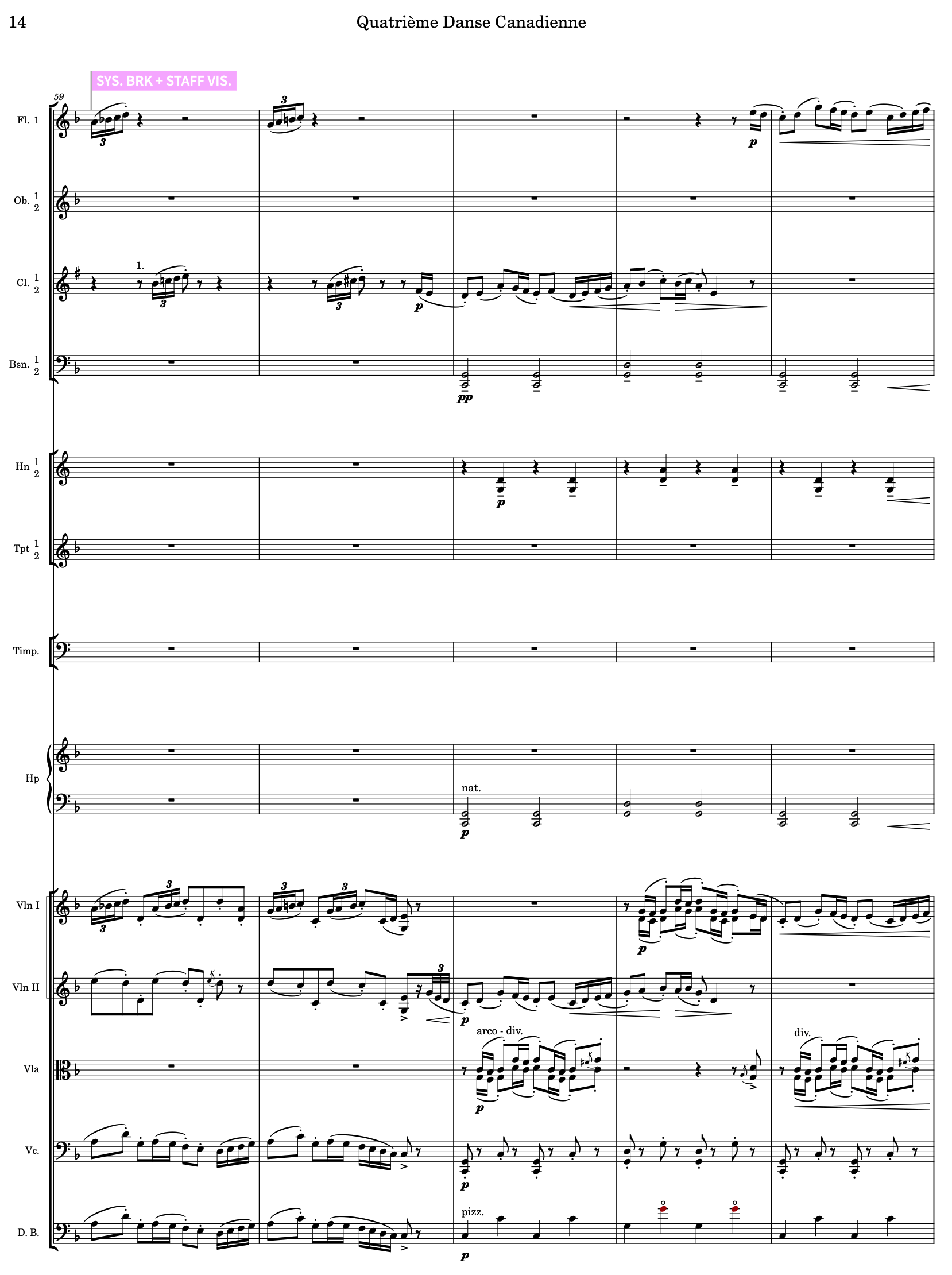 …which removes some of the extra white space.

The visibility status of those two staves is now set until the end of the flow. As the remainder of the score looks quite balanced, I will not need those staves to remain visible when empty, and so I need this to be a temporary override instead. Therefore, I can create another staff visibility system break at the start of the next page, choose the same staves, but set their status to Reset. Note that Reset will make those staves behave according to the Staff Visibility options chosen in in Layout Options. Choosing Hide instead will keep the staves hidden until the end of the flow, whether there is music on them or not.

Notice that there are some selection shortcuts at the bottom of the Manual Staff Visibility screen which can help accelerate the process by clearing, resetting, showing or hiding all the staves at once.

I mentioned Hide briefly, but this choice deserves some extra explanations. Any staff can be hidden at any time — even if it contains music. There are a variety of scenarios where this is useful. Since the hidden staves still play back, one could create a score of a Biber Rosary Sonata, complete with scordatura and custom key signatures, but with an extra staff that is hidden… 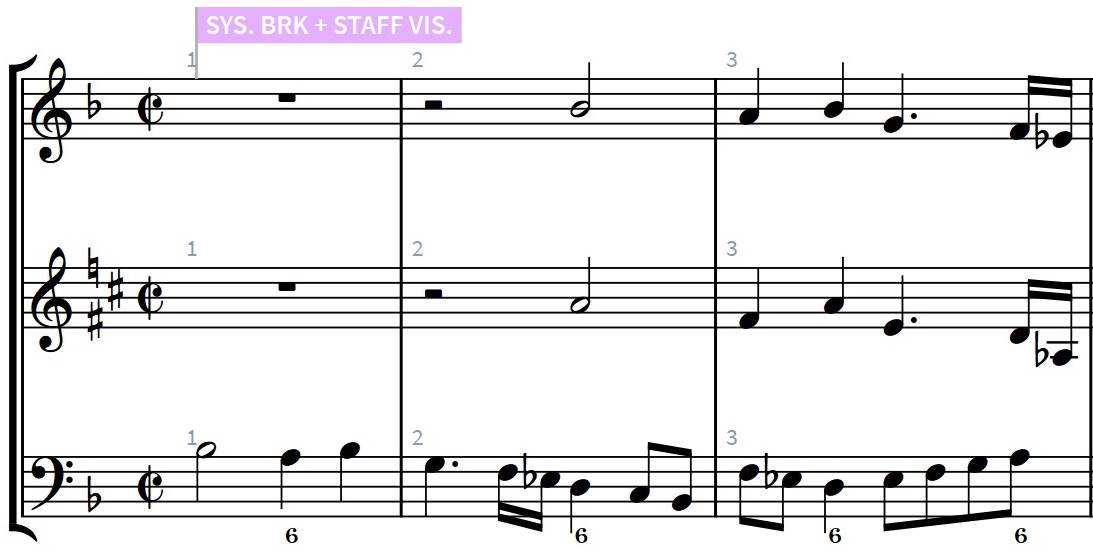 …containing the proper playback while the playback of the published violin part is suppressed:

Using Hide with other staff management tools can be useful show an instrument at the beginning of a flow, despite the fact that we don’t want to see the music for that instrument on the first system.

Here is a full score of a movement from Bach’s BWV 106. Although the bass line is written on the continuo staff, it is almost always performed on the viola da gamba. As it turns out, I have copied the continuo line to the gamba part, which I can now hide in the score; however, if I hide it from the beginning, it won’t appear as being part of the ensemble for that movement, and if I hide it after the first system, it will show a duplicate of the music engraved in the gamba part, which is superfluous in the full score.

Therefore, one can add a staff to Gamba 1 for the first few measures of the movement and hide only the staff which contain music: 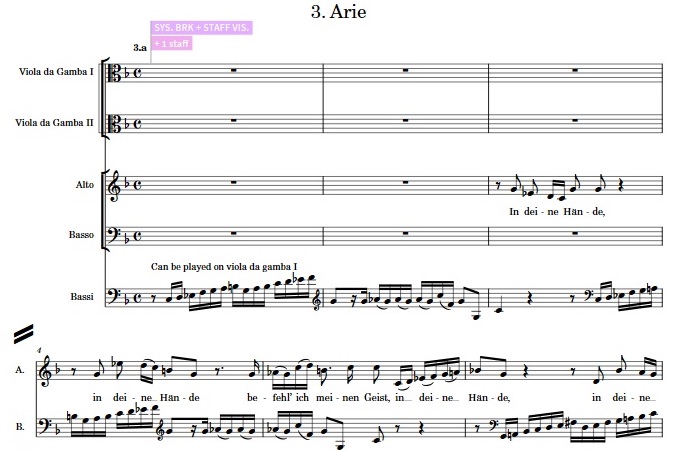 The additional, empty staff will appear on the first system and the rest of the movement will hide the populated gamba staff until it plays in earnest later on, where I can make it reappear using a reset with the Manual Staff Visibility tool.

In the part, I simply hide the extra staff at the beginning of the flow:

Note that since there is some scholarship concerning the Gamba 1 part being played on tenor viol — therefore requiring the Gamba 2 to play this movement — I can just as easily duplicate the process on the Gamba 2 part, and be ready for any eventuality while the score remains uncluttered.

As with many Engrave mode tools such as condensing overrides, brackets and brace overrides, this tool is best used after note entry is completed. It is a formatting tool and is best used by working on a score starting at the beginning and progressing through it to the end. However, again like all of those tools, all signposts generated by them can be simply moved by grid increments (which can be set for the value of entire measures in most cases), so that changing one’s mind in the process of editing with those tools is really quite painless as well as being extraordinarily comprehensive. This feature is therefore a most welcome addition to the ever-growing arsenal of tools at the disposition of the Dorico user.

This article is part of our comprehensive review of Dorico 3.5.