An essential element of Sibelius’s dynamic parts feature is the ability to make certain changes in a part without affecting the score. This is most evident in the positioning of objects as well as clef changes and instrument changes, to name a few. But this also extends to the ability to have different names for instruments in parts than what they are in the score. This useful feature has its intricacies and comes with a few caveats, so we’ll explain what those are and how to make the most of the available options.

But if both the Full Instrument Name in the Part(s) and Part Name have been changed, there is no linkage at all, and changes to any field will not affect any other fields.

If you have mistakenly broken a link, the only way to restore the linkage is to delete the affected part and create a new one. Any formatting changes that had been made to that part will be lost.

Besides the Part Name, any of the values in the File > Info fields in the full score (such as Title, Composer, etc.) are linked to the equivalent field in the part, unless you edit the field in the part, which will break the link. Until Sibelius 2020.6, if you made this edit in the part, this link was permanently broken. Fortunately, an improvement was made in 2020.6 whereby deleting the text entirely in the field will restore the part’s link to the score.

If you change properties in a part, such as coloring or hiding a note, moving the position of an object, or changing the accidental for a note, the change will only affect the current part, and will not change the Full Score or any other part that contains the staff that was changed. When possible, make changes in the Full Score, and avoid breaking the linkages unless you definitely want something to be different in the Full Score and Part. 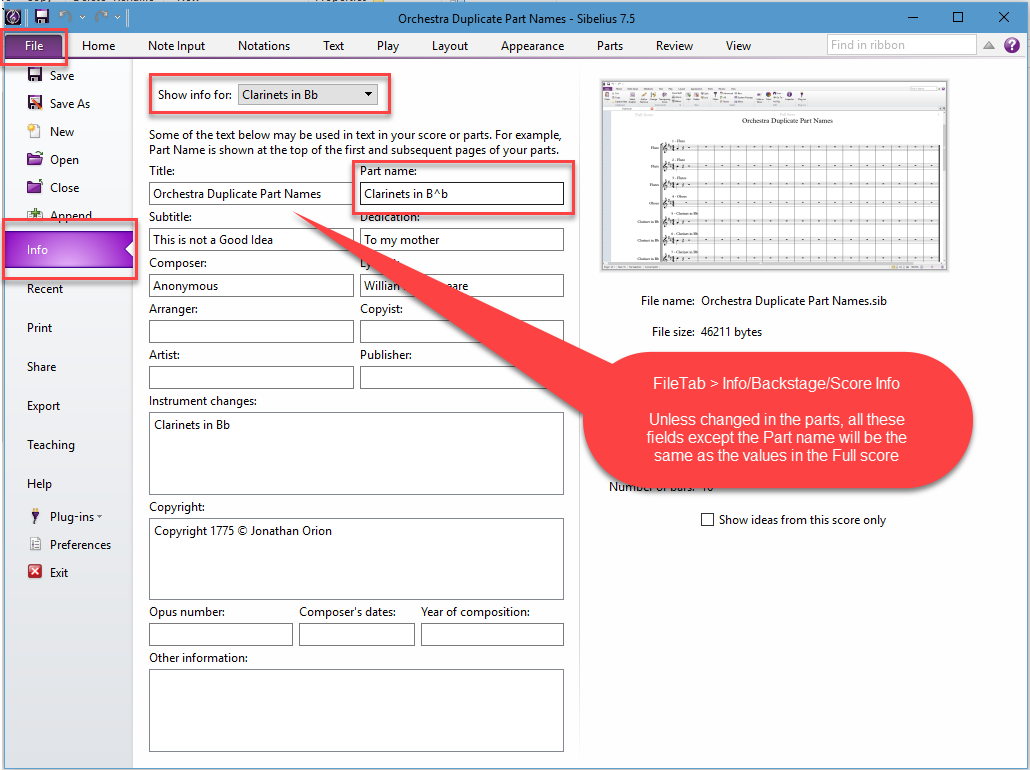 The problem with duplicate part names

If multiple parts have the same name, and you do not notice this and do not change the names, you will encounter problems if you export files that include the Part Name in the file name. This will happen when exporting parts as PDF and when extracting parts. The problem is that each part with a duplicate name will overwrite any earlier file with the same name, and you will have fewer files than you would expect, and some poor flute player will have no music.

Some plug-ins will also have problems with duplicate parts names. Open Selected Parts did not work because the parts names were put in a list box, and if there are duplicate names the plug-in could not tell which one to use (due to limitations in how listboxes work in a plug-in).  I resolved this by adding numbers to the end of duplicated names, but it is awkward at best, and I had never noticed this was a problem before. I suspect other plug-ins might run into the same problem. 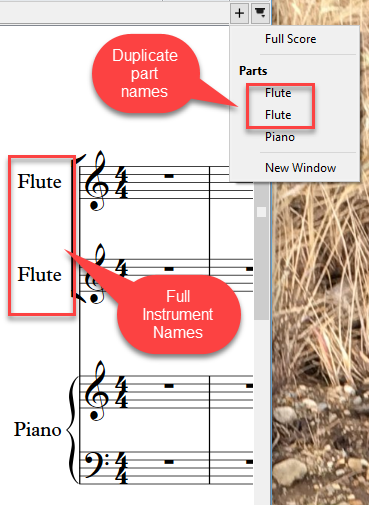 The only fix for this is to be sure you have no duplicate part names, which can be tricky to determine in a large score.

The downloadable plug-ins Open Selected Parts and Edit Part Names have buttons that will check for duplicate part names. Edit Part Names also has an option to prevent you from changing a name so that it becomes a duplicate. If you have either of these plug-ins installed, run it and have it check duplicates before you print out parts.

Plug-ins that let you edit staff and part names

There are three downloadable plug-ins that will let you edit the staff Full and Short Instrument Names or the Part Names, for all staves or parts in the score in one place. Changes made by the plug-ins can affect other names, depending on the state of the linkage. 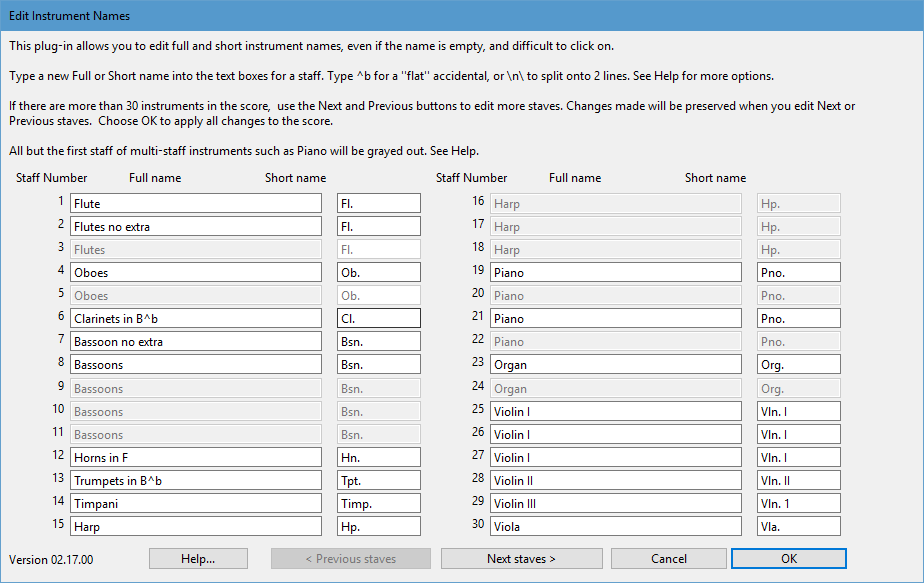 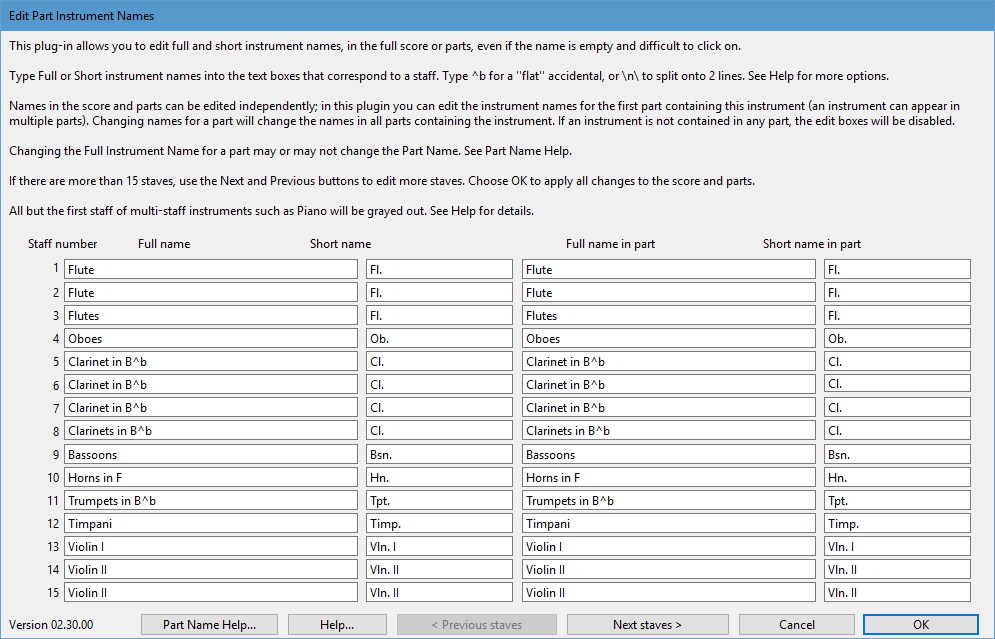 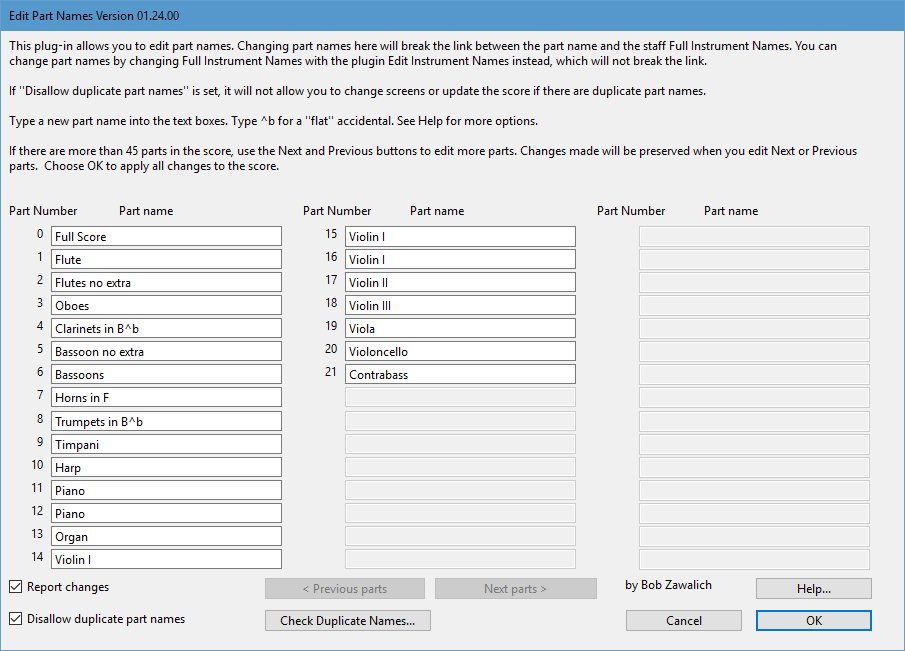 So there it is. Everything is connected until it isn’t. I hope this will help explain why these things might go wrong, and help you avoid those situations.

Sibelius 2022.9 adds an additional way of labeling staff names that effectively allows groups of instruments and individual staves to...

When creating parts from a grouped instrument, Sibelius will only create one part with all of the staves, instead of...

A video tutorial that describes a multi-step solution to a persistent problem in Sibelius: instrument changes with key signatures that...